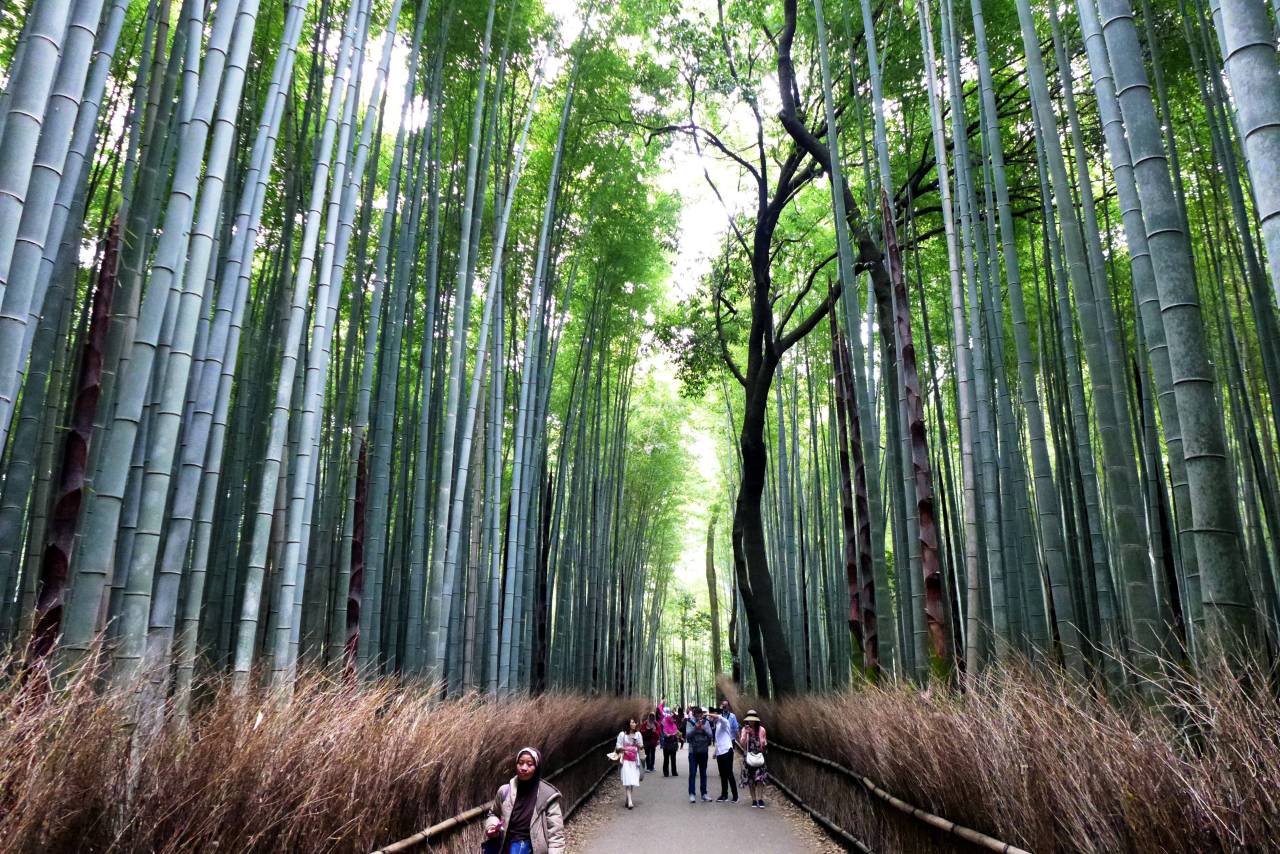 Arashiyama 嵐山 is depicted in most guidebooks as a lush bamboo forest; an idyllic photograph, no tourists, the sun piercing the bamboo. Thanks to such guidebooks, this type of shot is virtually impossible unless you want to get up at crack of dawn on a weekday, preferably during rainy season or some other time when less people are outside – Arashiyama’s bamboo grove is normally packed. The guidebooks aren’t wrong though, the bamboo is fantastic and serene and beautiful, it’s just that the path isn’t.

As you have seen in my other two posts on Arashiyama, there is so much to this area of North-West Kyoto which you should not miss. This is a place I am definitely returning to in order to get a bit more ‘in depth’ rather than the tourist check-list I covered last time. The bamboo forest, like those other ‘check-list’ tourist activities I covered, is unmissable and a fantastic experience, despite the presence of other people also admiring the bamboo (how dare they).

You can start your bamboo experience around the back of Tenryuji temple, or by following the crowds leaving the main Tenryuji gate, which is what we did. Almost every Buddhist temple in Japan has a bamboo grove, but Arashiyama’s forest is much larger. It doesn’t stretch on forever, but there is enough for a 10 – 15 minute stroll. Nestled in the bamboo are a few temples and shrines. We managed to find three, but I am sure there are more hiding away from the main tourist paths.

The first temple we came across was Nonomiya-jinja 野宮神社, a small shrine with a moss garden, several main shrines and loads of people. Nonomiya shrine does not have a founding date like most shrines as it is actually the last of a series of shrines called ‘Nonomiya’, which were where daughters of the imperial family would undergo 3 years of purification before becoming priestesses at Ise grand shrine, one of the most sacred shrines in Japan. As it happens, I have just visited Ise, so hopefully you will learn more about this unique shrine in my next post! Nonomiya shrine is the ‘last standing’ of the Nonomiya shrines, and no longer serves its purpose as a purification shrine.

The present day Nonomiya shrine is dedicated to several gods. Residing here we have the Sun Goddess herself, the God of fire, a God of good matches in marriage and a God of easy child birth. This makes the shrine popular with pretty much everyone, but especially women, who come to write their wishes for a good match in marriage upon heart shaped ema 絵馬 (prayer tablets). This shrine is also featured in the Tale of Genji, the Japanese classic, written in 1008, and there are several prayer tablets with the meeting of the two characters there. The two characters are often known as The Shining Prince and the Rokujo Lady (most characters in the story do not really have names but have titles).

After Nonomiya shrine we continued our walk through the bamboo forest, passing a lot of rickshaws. It seems that the thing to do as a young Japanese lady is to get your best friend, dress up in beautiful kimono and go for a rickshaw ride around Arashiyama. It does look like a fun thing to do and the girls look really pretty. I always feel awkward taking pictures of people when they can see me doing it, plus they were moving at speed, so sadly I don’t have that many pictures of the girls on their rickshaws.

The next shrine we visited was very small. This was Mikami Jinja 御髪神社, which literally translates to ‘shrine of hair’. This name piqued my interest from the outset, and I was even more intrigued to see a small pair of scissors chained to the place you buy charms. It turns out that at this shrine people cut off a small piece of hair and offer it to wish for good fortune. This is because this is allegedly the site of Japan’s first hairdresser, set up in 1281. The prayer tablets there are concerned with not going bald, getting thicker hair and other hair-related wishes. I think its nice that Japanese religion allows people to focus in so much on a specific thing, it’s pleasing to imagine a hair god hanging out with the god of the sun, the god of the sea and maybe even the god of vending machines (Japan must have one, there are so many vending machines here, someone has to watch over them).

Finally we came across Jojokkoji temple 常寂光寺, a peaceful temple a little out of the way of the main path through the forest. This temple climbs up the mountain, giving a pretty good view over Kyoto. This temple was founded in 1596 and features a pagoda from the 17th century. I strongly suggest visiting their website and looking at the ‘movie’ section to see how beautiful it is in the Autumn and Spring. The website is in English and Japanese and it’s the best temple website I’ve ever come across. The main hall is under construction until 2016 but it’s definitely still worth a visit.

Arashiyama bamboo forest is beautiful, and right next to the forest is the beautiful river. Much wider than my local Kamogawa river, the Hozu river is spanned by the ‘moon bridge’, which was originally built in the 8th century (latest reconstruction 1930s). Crossing this bridge takes you to the mountains and the monkey park, but even if you don’t want to venture that far, I would recommend just going to the bridge to see the river.

Arashiyama is a fantastic day out and is one of the best complete day trips you can do in Kyoto – it’s top of the guidebooks for a reason. To avoid the crowds I would suggest going on a weekday, and if you want that bamboo shot, go early in the morning on a clear day for a really beautiful picture. I know I’ll be going back on a sunnier day to appreciate the bamboo.