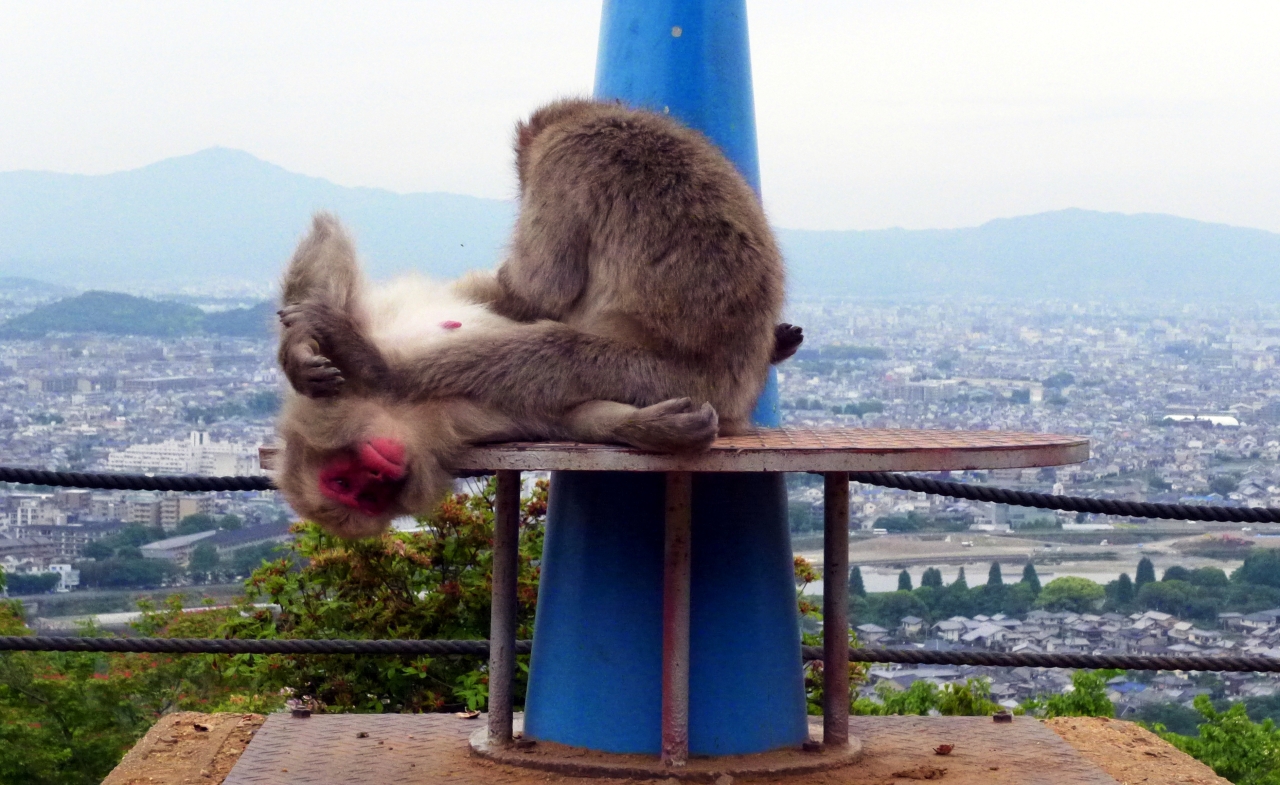 Arashiyama 嵐山 is one of the top tourist spots in Kyoto, featuring world heritage temples, a magnificent bamboo grove, great food and, nestled on the top of the mountain, a monkey paradise! I did the whole day trip with my sister and cousin, but today I want to take you to the top of monkey mountain.

The Arashiyama Monkey Park Iwatayama is located across the river and up the mountain, there are many signs on the way so it’s pretty easy to find. You pay your 550円 per adult (around £3) and set off up the mountain. It is a considerable walk up the steep mountain to get to the monkey house, taking around 30 – 40 minutes. I would not have enjoyed climbing in the boiling summer heat, so I’m very glad I went when it was cooler.

We finally reached the top and were rewarded for our climb. The monkeys are free roaming in the park but prefer to congregate by the hut at the top because this is where they are fed. As such we were in the same place as the monkeys with no barriers between us and them. There were several rules in place to avoid upsetting the monkeys, such as not looking them in the eyes (as they do this to display dominance) and not getting too close. There were many watchful attendants making sure visitors kept to the rules.

Inside the hut were plenty of seats for resting after the climb and a stand selling food for the monkeys. For 100円 (60p) you get a small bag of feed (assorted nuts and fruit) to feed the monkeys. The monkey cling to the wire bars on the windows and you pass them the food.

The monkeys at the monkey park are Japanese Macaques. They are the most northern-living non-human primate, and average a lifespan of 6.3 years, though some have lived as old as 30. They are an intelligent species capable of learning from each other, such as how to wash food. They sometimes bathe in hot springs and have been known to make snowballs for fun. There are around 114,000 Japanese Macaques in Japan and there are around 170 in the troop at Arashiyama. When a Japanese person thinks of a monkey, they definitely think of the Japanese Macaque – in Japanese it is known as ニホンザル (nihonzaru), meaning ‘Japanese monkey’.

I would strongly recommend visiting the monkey park if you go to Arashiyama. It’s quite the climb but it is such an amazing experience to be so close to the monkeys. If you love animals you simply have to go.