When you live in Kyoto temples have a tendency to blur into one-another. It’s easy to get into the mindset that once you’ve seen one you’ve seen them all. Hopefully through my blog you’ve learned that actually almost all the temples in Kyoto have an interesting history or quirk that makes them special. They also have their unique stamp of course. That being said, the act of visiting a temple is often the same; have a wander around, get a stamp done, take pictures of things that look interesting and then on to the next one, so it’s always pleasant when you find something truly different, or just something you haven’t done before. On Saturday I found one of those temples.

Manshu-in 曼殊院 is a temple near Shugakuin and was number 4 on our ‘temple trail’. It was the only temple that we paid an entrance fee for and it will certainly stick in my memory. The reason being that this is one of those wonderful sprawling temples with passageways and rooms and a zen garden; you pay your money and then you go into the temple itself in your socks to explore.

In Japanese houses and temples you certainly don’t wear shoes, ever, but the temple floors were very cold! They had a basket of very warm looking knitted socks at the entrance but I didn’t realise that they would be necessary until my feet were already turning to ice. Despite my feet complaining at the unforgiving freezing wooden floor, I really enjoyed looking around and seeing all the artwork, artifacts and architecture the temple had to offer. 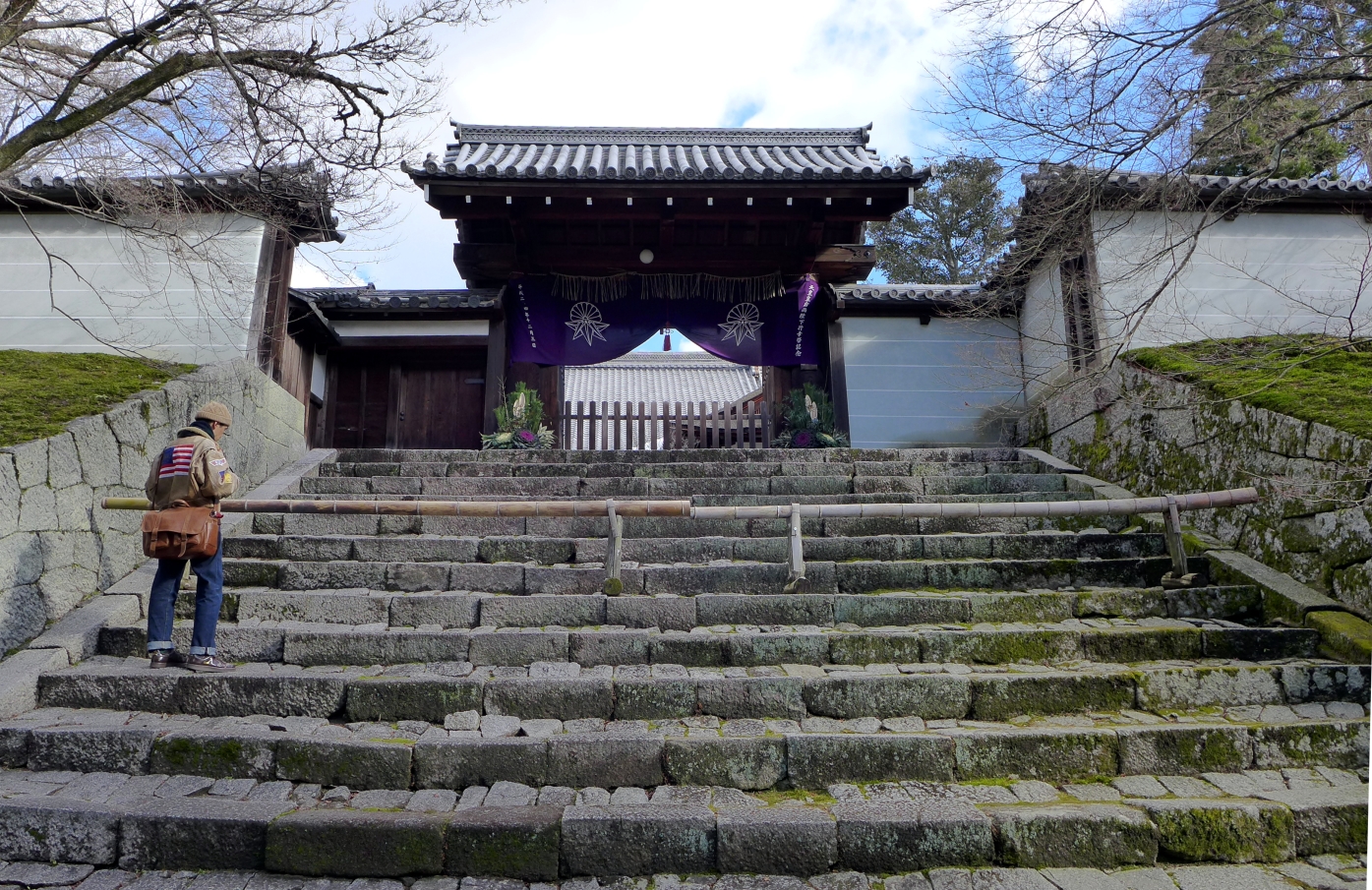 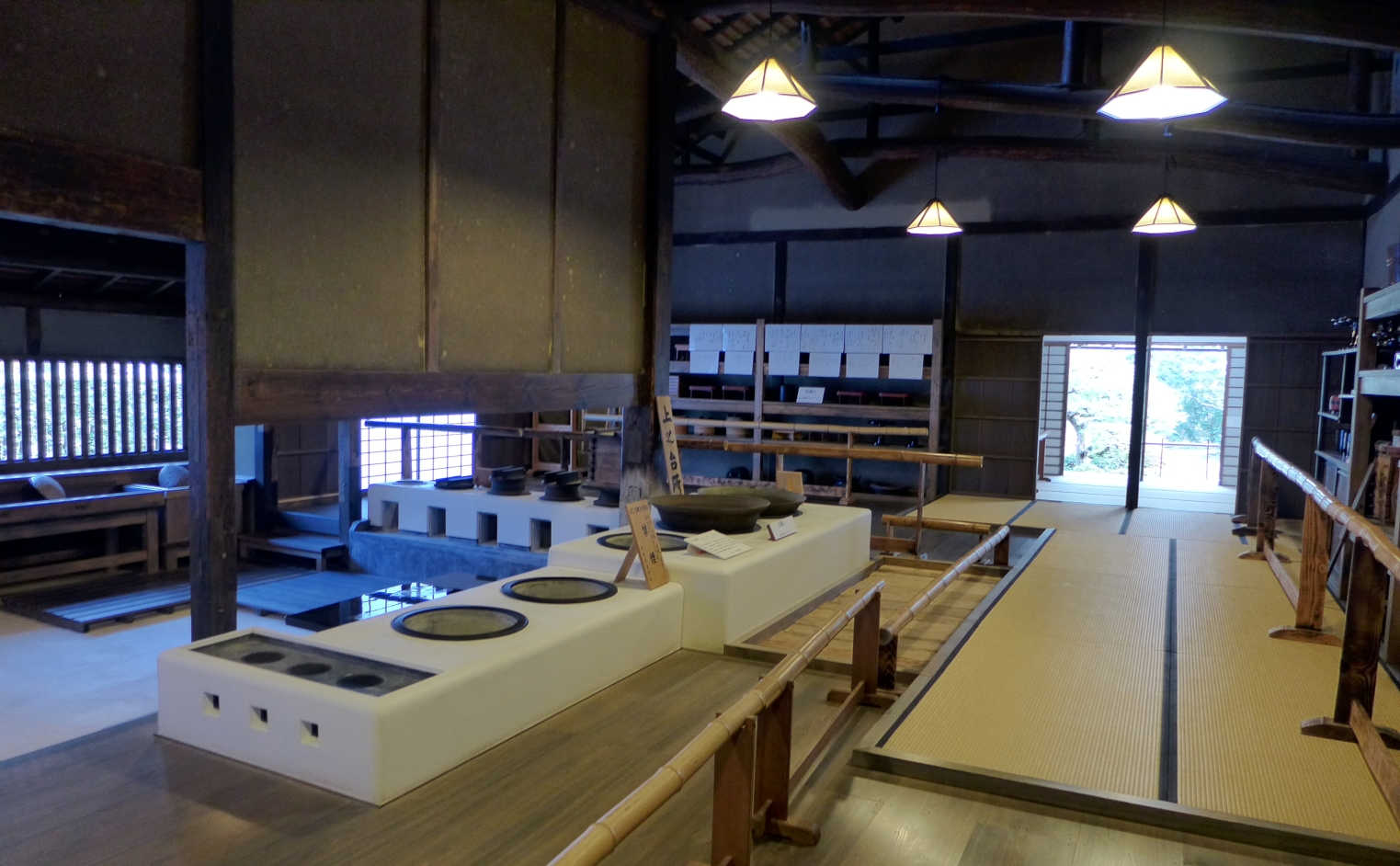 This temple allows you to take photos of the garden but does not allow photos of the inside or artwork. I only realised this after I’d taken some pictures and I’m sure they won’t mind too much if I share them with you – after all you may choose to visit after seeing them! Manshu-in has screen paintings done by several very famous Edo period artists, such as Kano Tanyu, Kano Eitoku and Kanyu, each with their own distinct style. The screens were beautiful and definitely worth going to see. There were also several Buddhist artefacts as well as a collection of old cooking equipment. There were a few signs in Japanese explaining the exhibition but not very much and nothing in English. Bear in mind that there were far more screens and objects than those pictured here as due to aforementioned photo-ban I didn’t take pictures of most of them.  In fact the writing in photo number two to the right of the screen reads ‘photography prohibited’ in Japanese… whoops! 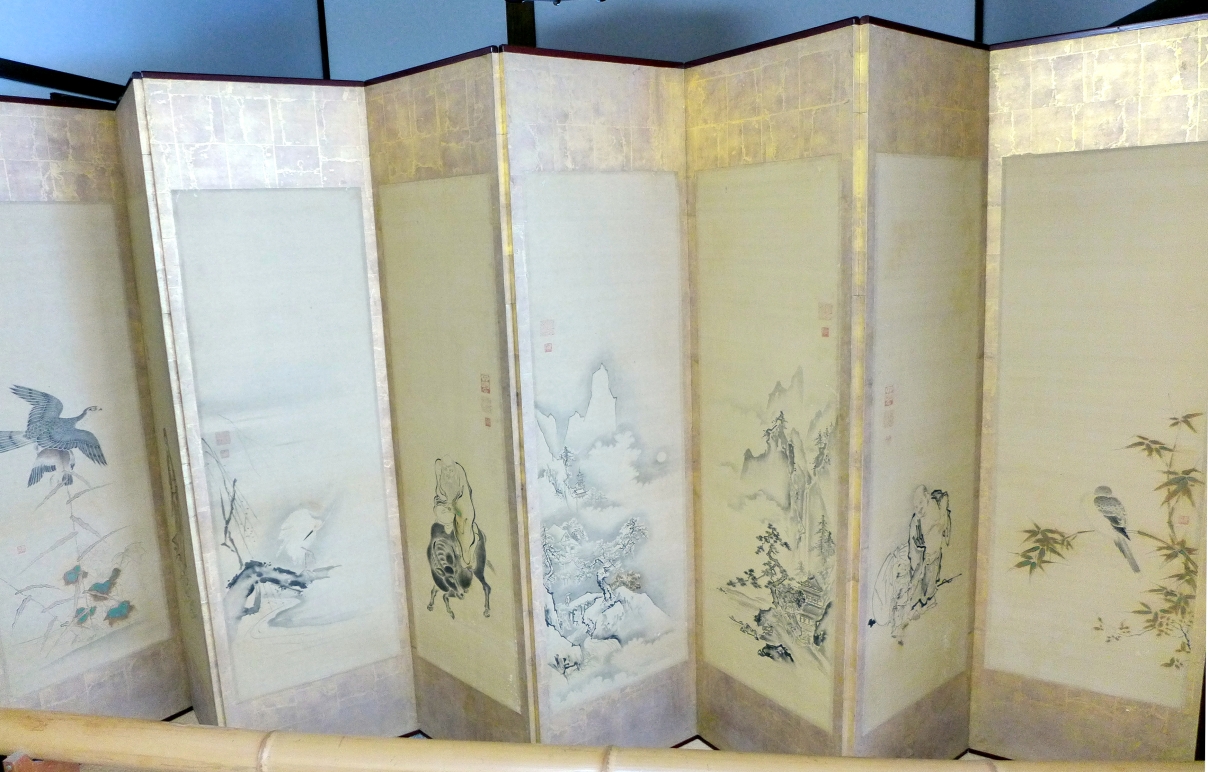 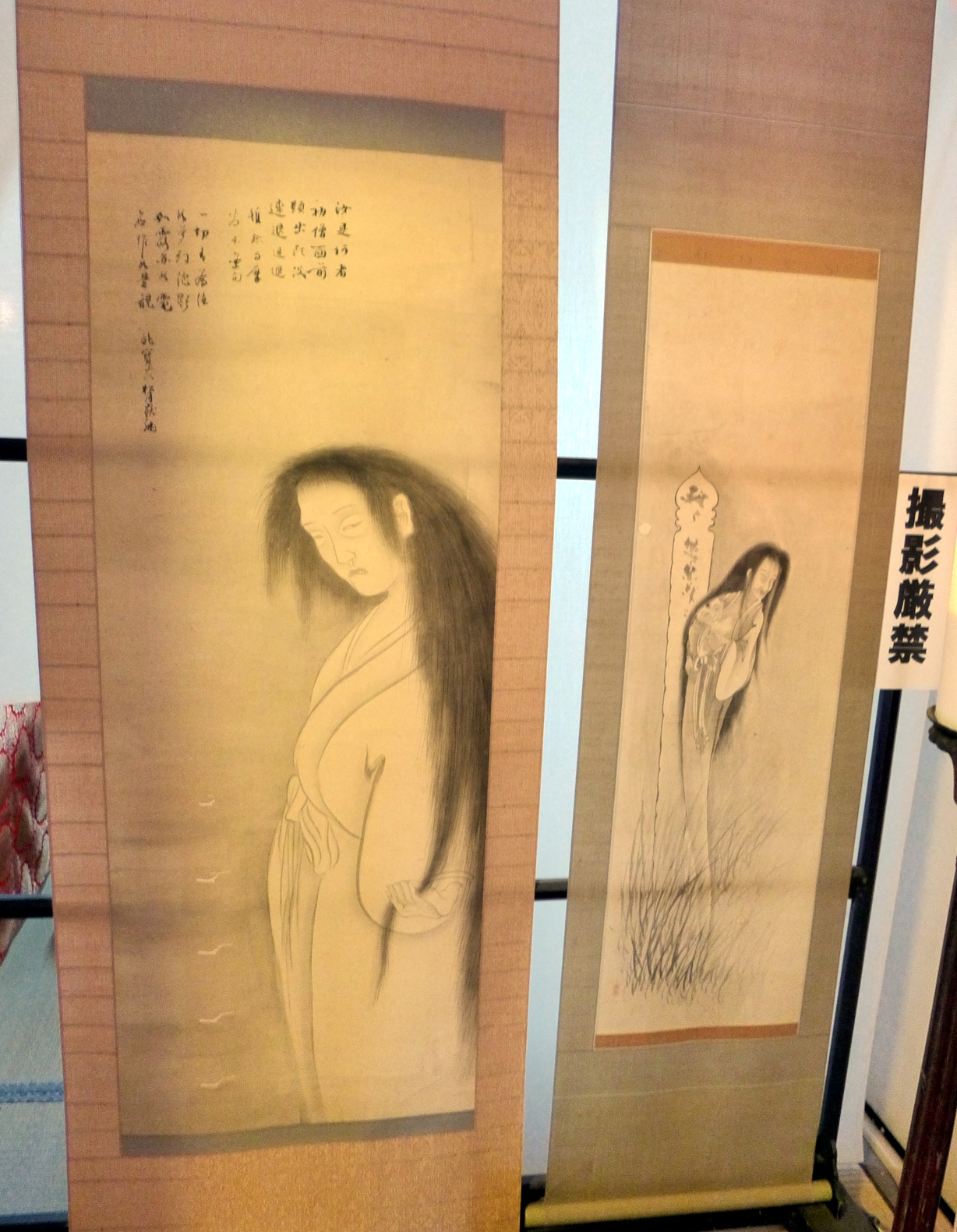 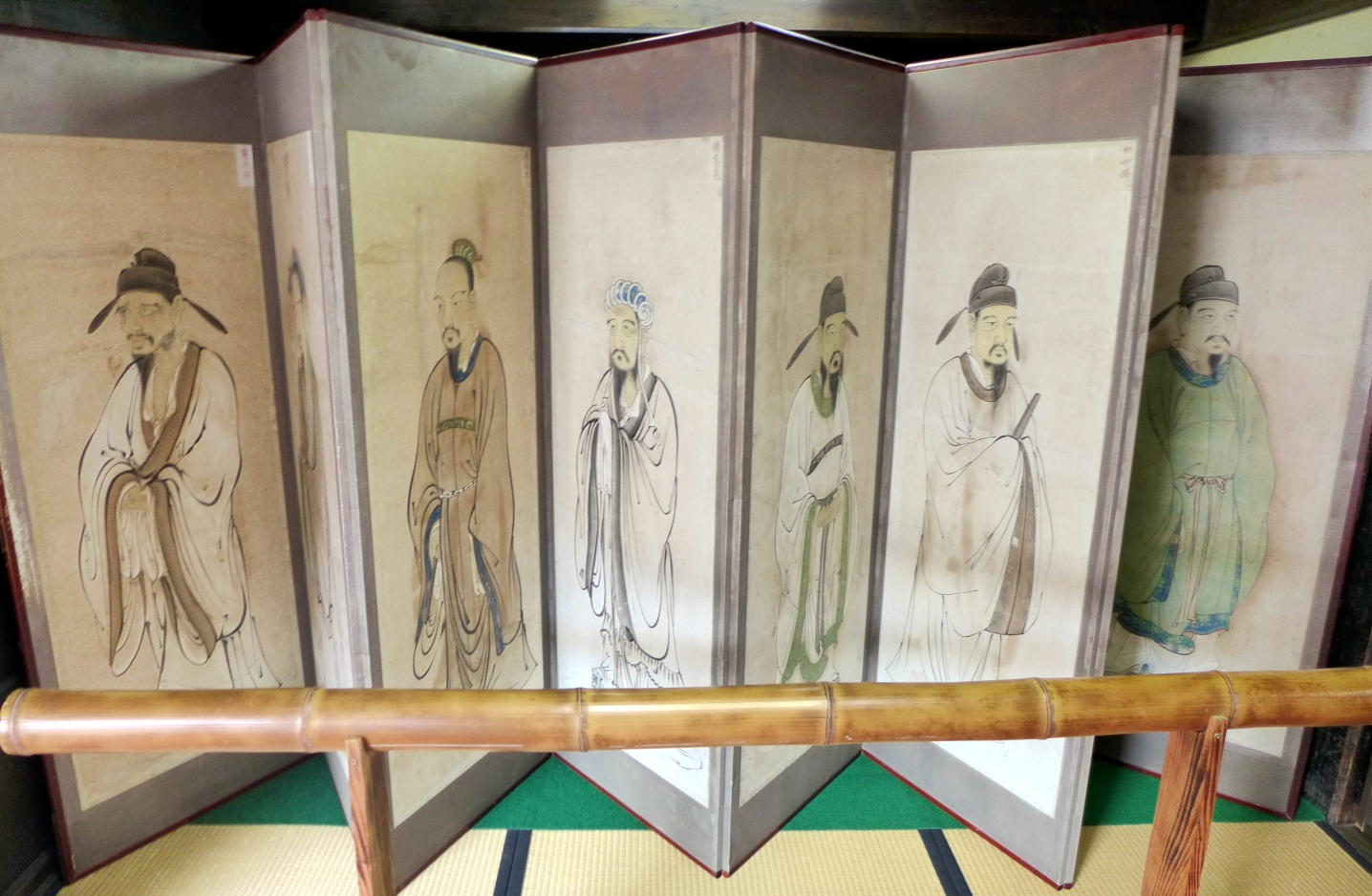 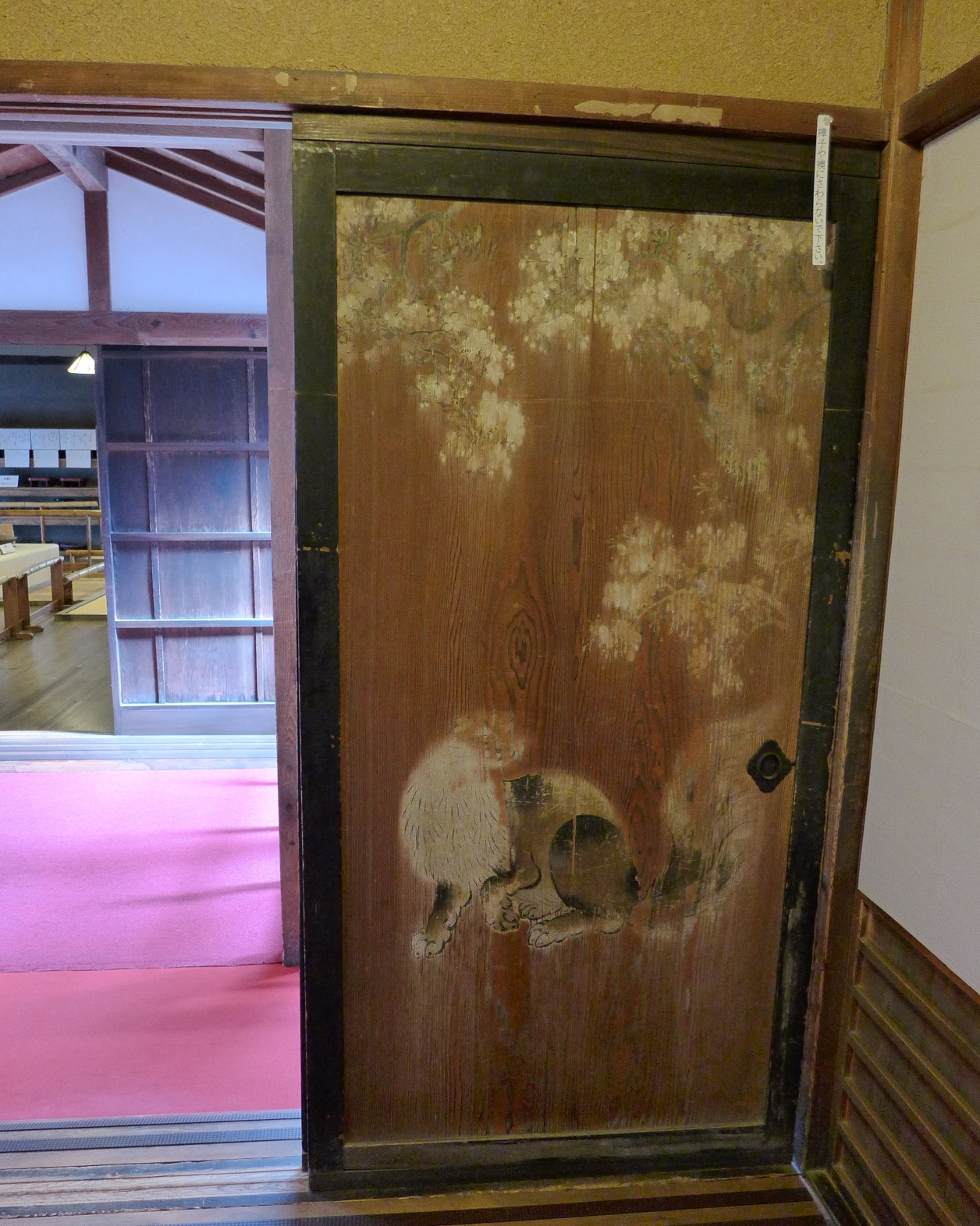 All around Manshu-in is a beautiful Zen garden, complete with raked gravel, rocks and trees. In fact, it has an ancient spreading white pine tree that is 400 years old! It’s being propped up but seems to still be going strong. The gravel parted the islands of greenery like a river and the red matting on the temple decking made me feel like I was on the set of a Japanese historical drama. Unsurprisingly this garden has been designated a national place of scenic beauty. Unlike a lot of Zen temples you are not allowed to sit on the outer decking to contemplate the gravel, but to be honest in the winter you wouldn’t want to expose your backside to the cold that your feet are already going through. These photos are guilt-free as you are allowed to take pictures of the outside.

Manshu-in was founded in the 8th century but it was moved to its present location in 1656. It is often called Manshu-in Monzeki 饅衆院門跡; Monzeki is a honourific granted to a temple if it traditionally has a member of the royal family as a high priest and Manshu-in’s first head priest was the Emperor’s nephew.

It is also linked to Buddhist royalty as it was founded by Saicho, the founder of the Tendai school, a great figure in Japanese Buddhism. I even had to write an essay on him in my first year of university. He travelled to China (like a lot of monks did, remind you of my previous post?) to bring back Buddhist texts. Two of the ships sent to China sank but Saicho’s made it, sealing the future of Japanese Buddhism. 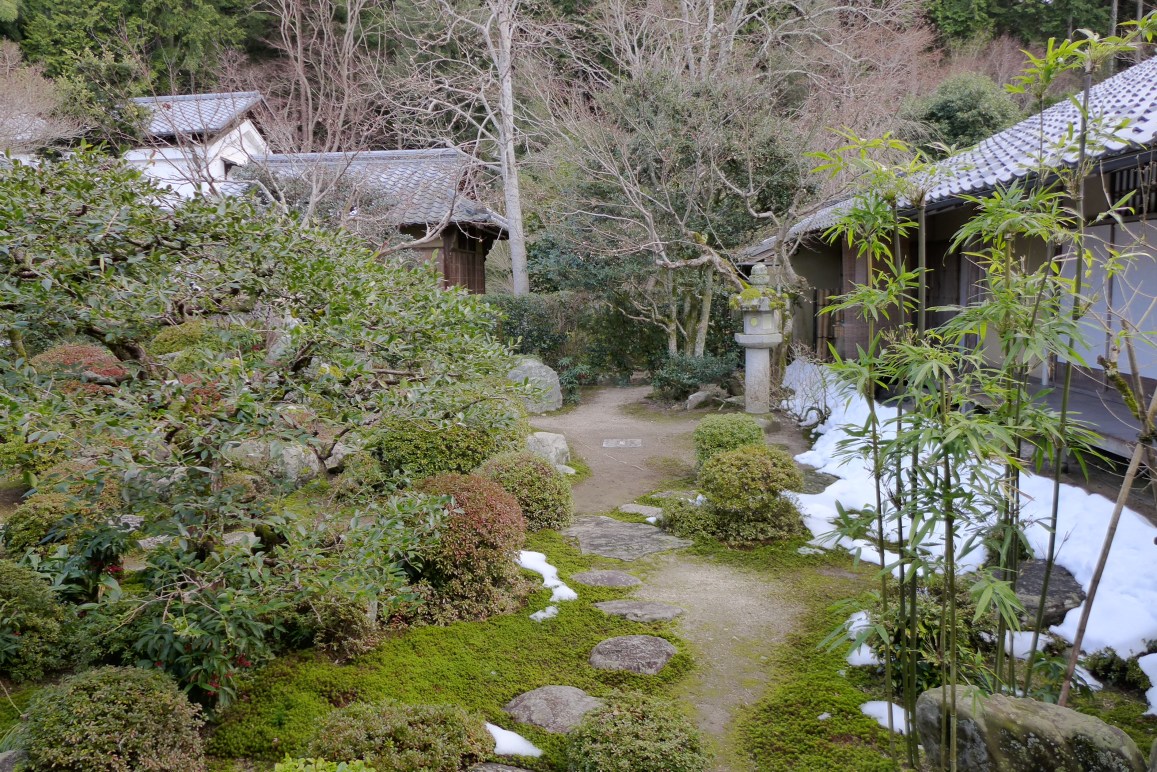 Tendai is still one of the main schools of Japanese Buddhism and (without going into specifics because I really don’t understand all the varying Buddhist strands) they believe in a comprehensive approach to Buddhism, supporting all ways to reach enlightenment while also reconciling Shinto beliefs with Buddhsim by declaring that Shinto gods are simply a representation of universal Buddhahood and therefore acceptable to worship. Apparently Saicho was also the first to bring tea to Japan, which if it’s true was pretty monumental and probably as important as bringing Buddhist teachings (depending on who you ask). 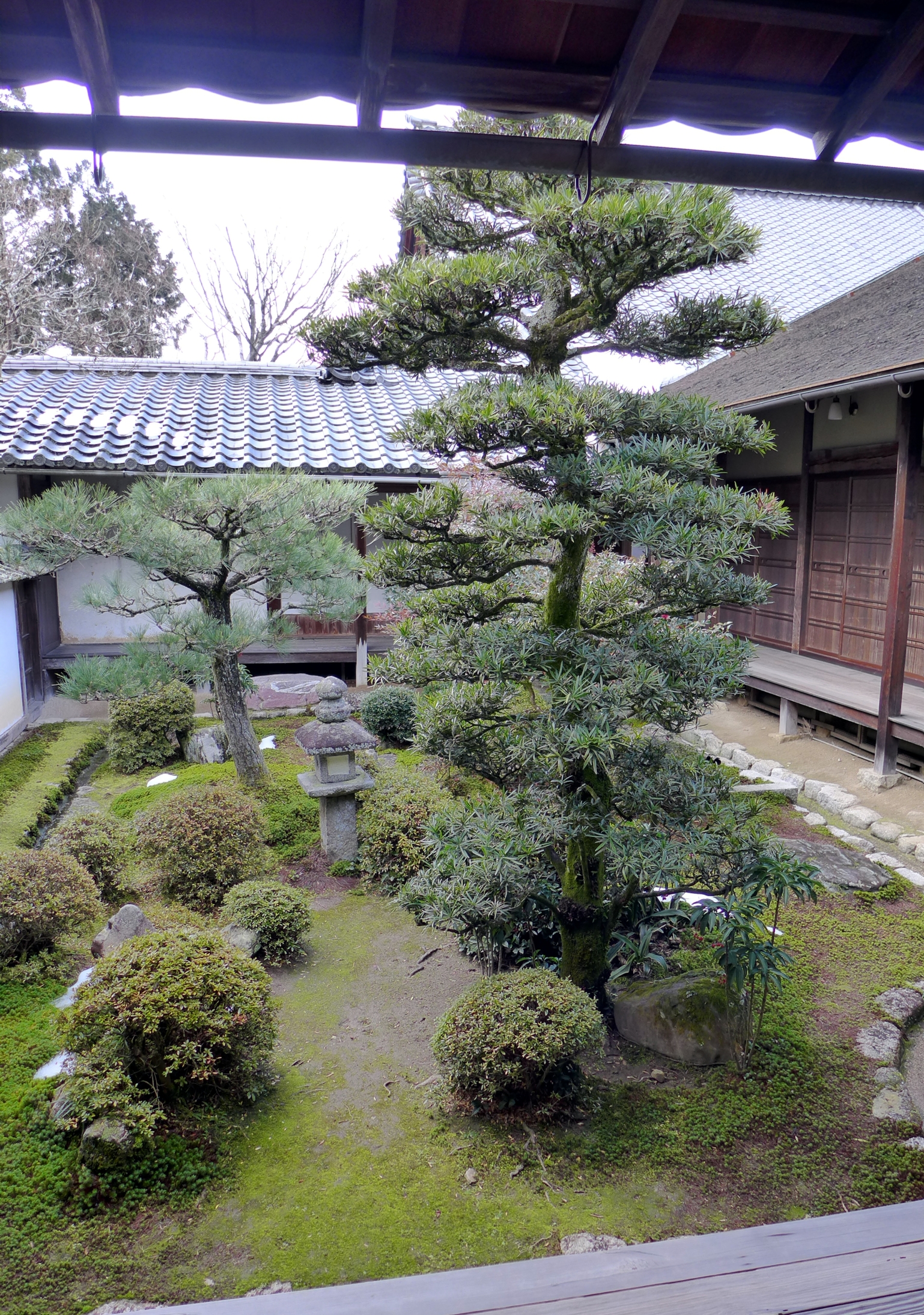 We also met a very nice cat outside Manshu-in which would not stop meowing. Very pretty cat. I think cats like temples because I see them around temples a lot. Or maybe it’s because I live in Kyoto and temples are everywhere.

Definitely a fun temple to wander round at your leisure, looking down passageways and coming across tiny courtyards with gardens in the middle as well as the garden round the outside. The temple entrance fee was 500円 (£2.80) and worth it in my opinion – being allowed to walk around the inside of a temple is fairly rare and were the artwork in a museum you’d probably pay the same just to see the paintings without the garden or the temple.