A week ago my sister and cousin came all the way from the UK to visit me! I got to do loads of fun things with them, the first of which being a visit to Osaka Kaiyukan Aquarium 大阪海遊館. I had been meaning to go for a while as I love aquariums and Osaka aquarium has a great reputation. It’s one of the largest aquariums in the world and is famous in Japan for its huge tanks.

We visited the aquarium during Golden Week (a week of public holidays in Japan), so it was pretty busy. We had to queue around 40 minutes for tickets and there were big crowds inside but it was manageable and definitely worth it. The tickets cost 2300円 (£12.20) for adults and the aquarium is open from 10:00 – 20:00. There was also a Legoland (or workshop) nearby, which amused us as my home town is very close to Legoland Windsor – I used to go a lot when I was younger so it was strange to see one in Japan. 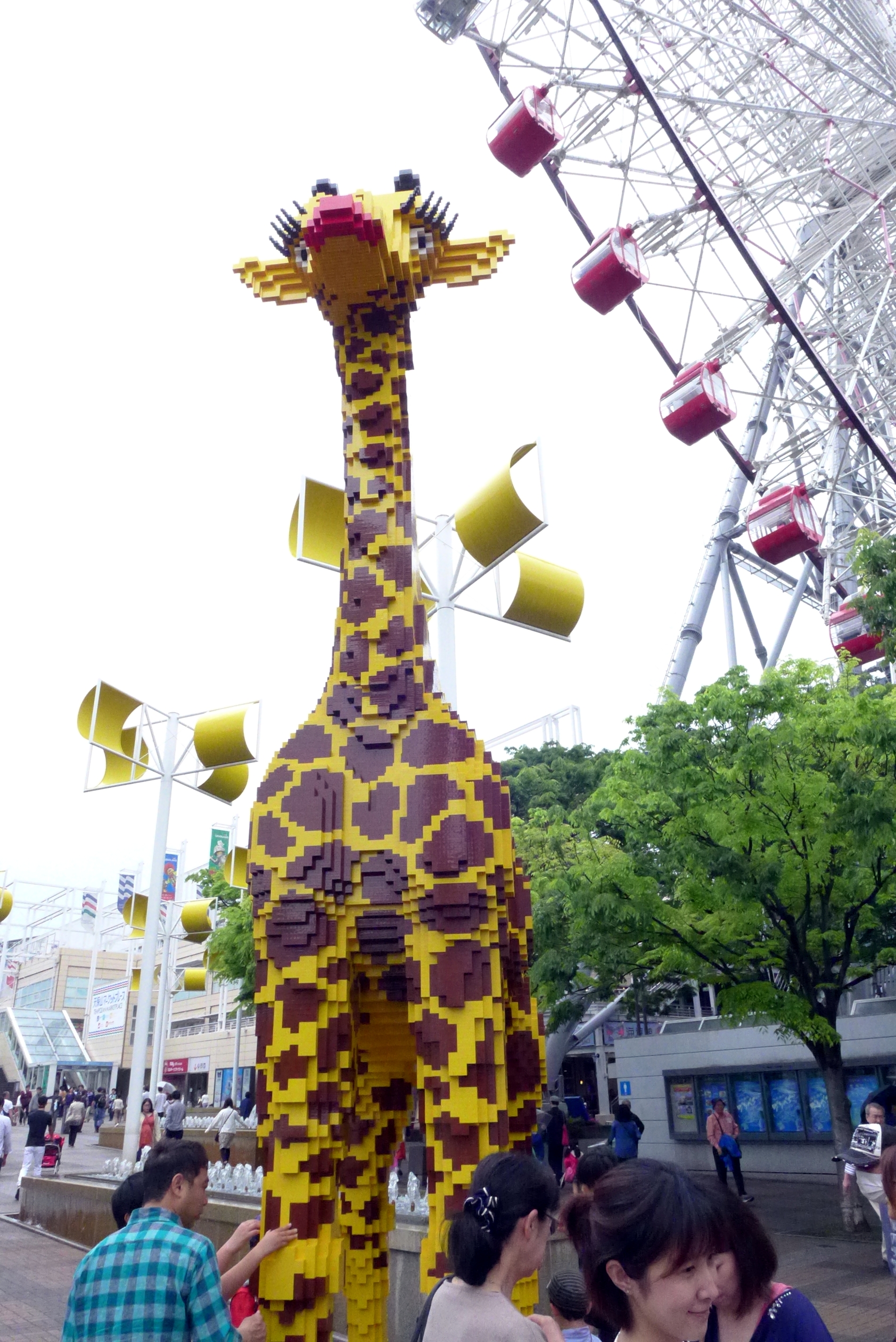 The aquarium exhibits are based around the Pacific Rim theme; there are 16 main exhibits each featuring a different habitat of the Pacific Rim, such as Ecuadorian Jungle, Great Barrier Reef and Pacific Ocean. 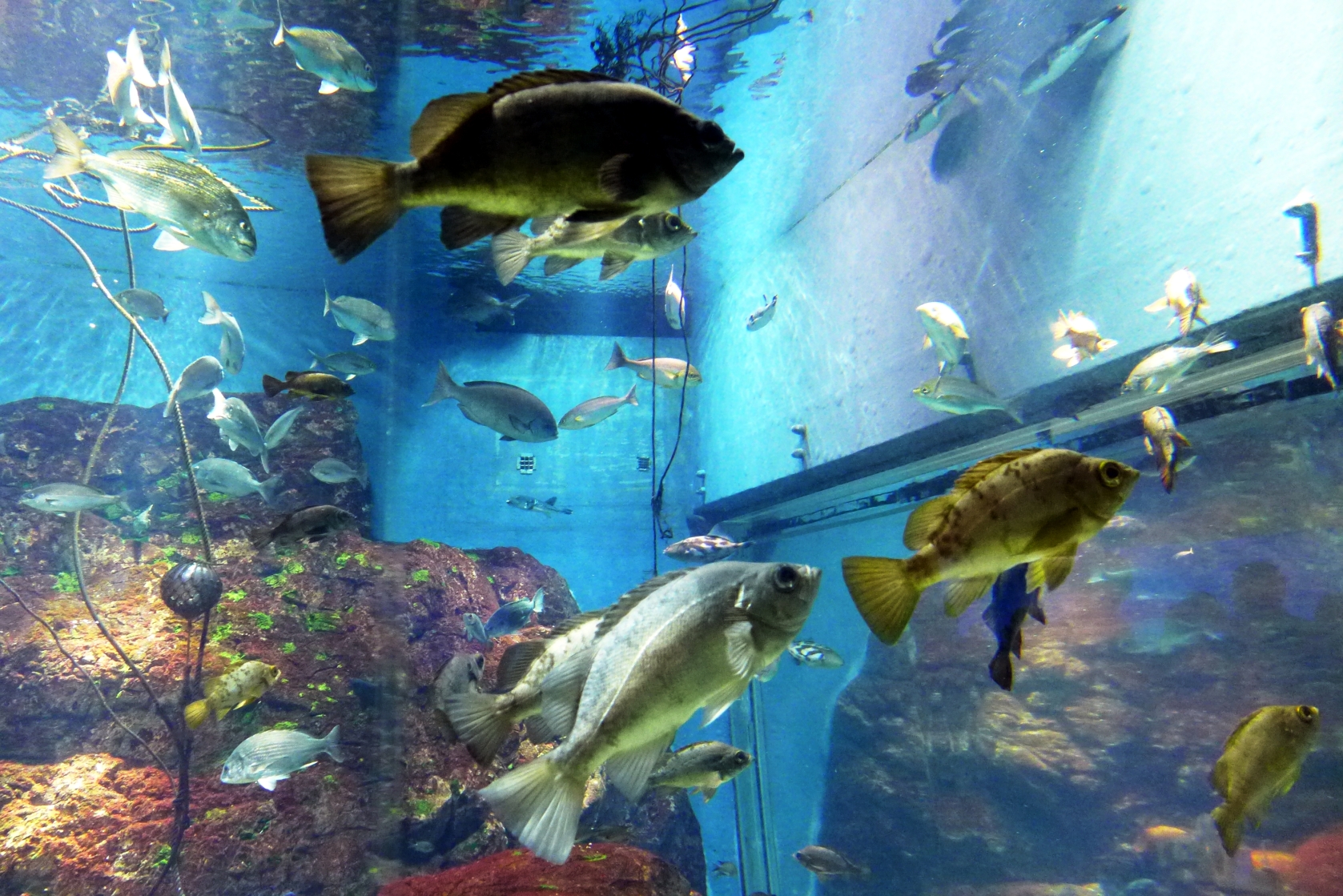 I really liked that the tanks were so large; the aquarium is structured so that you walk down a sloping spiral with the tanks on either side and a huge tank in the middle. The tanks are very deep so you see the animals on the surface and then later spiral down to see the same tank underwater. This was really cool, especially as the dolphins and the seals loved playing with the crowds, coming right up to the tank walls, racing around, and following the hands of those standing by the glass. I was lucky enough to have a seal come and play with me which was really amazing. I felt that the animals in this aquarium were genuinely happy, much more so than the ones I saw at Yokohama Hakkeijima Aquarium, which did not have very large tanks. 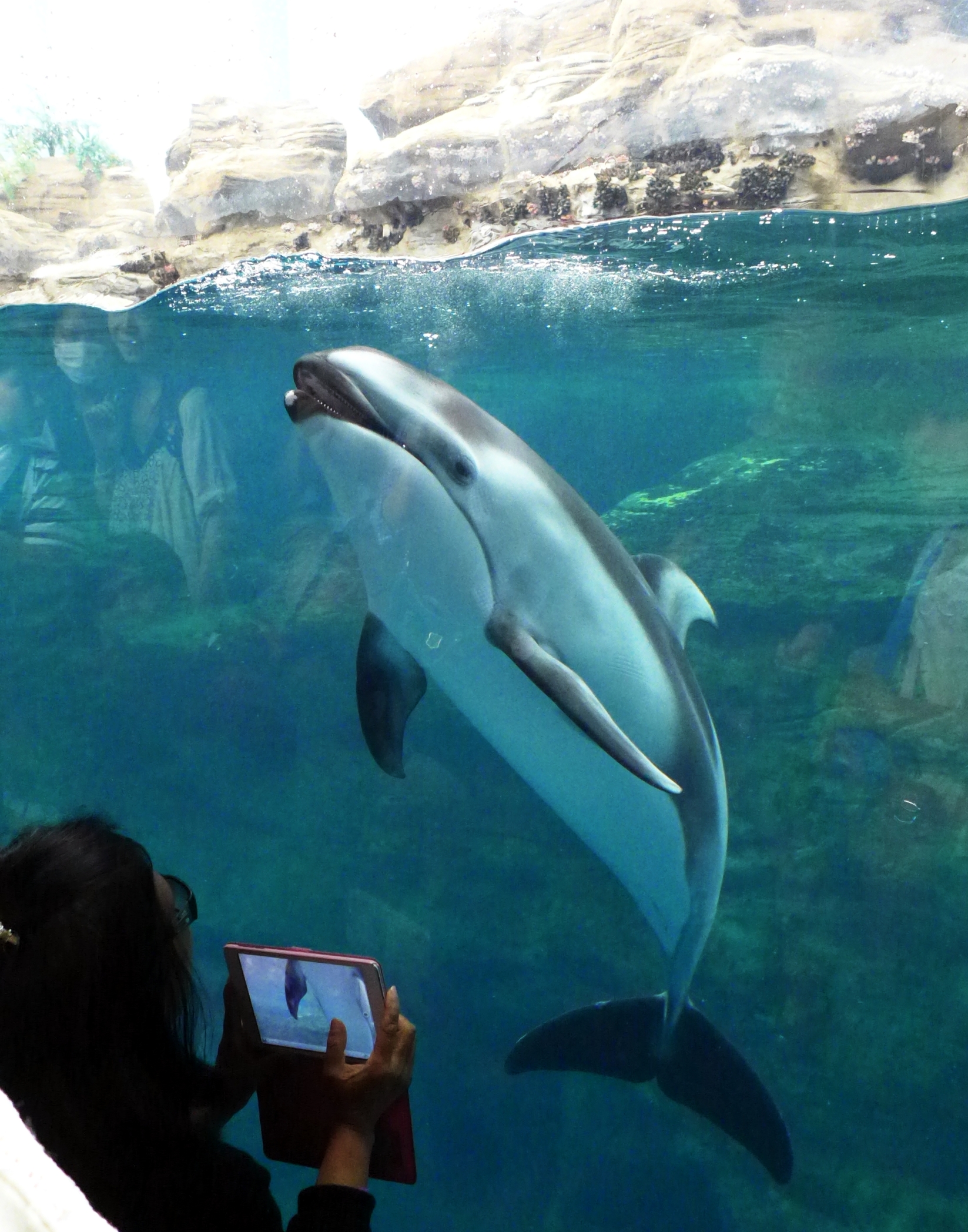 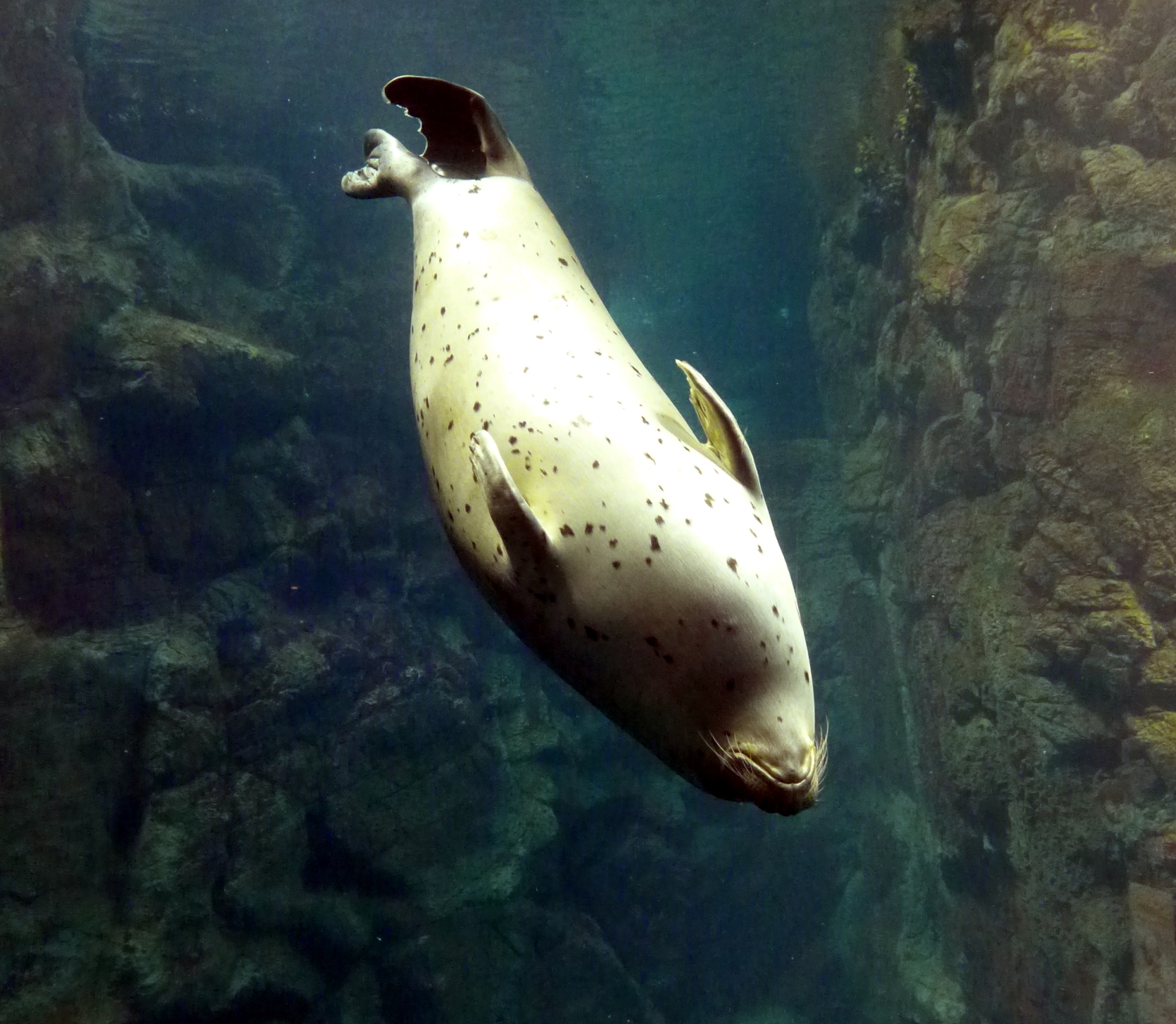 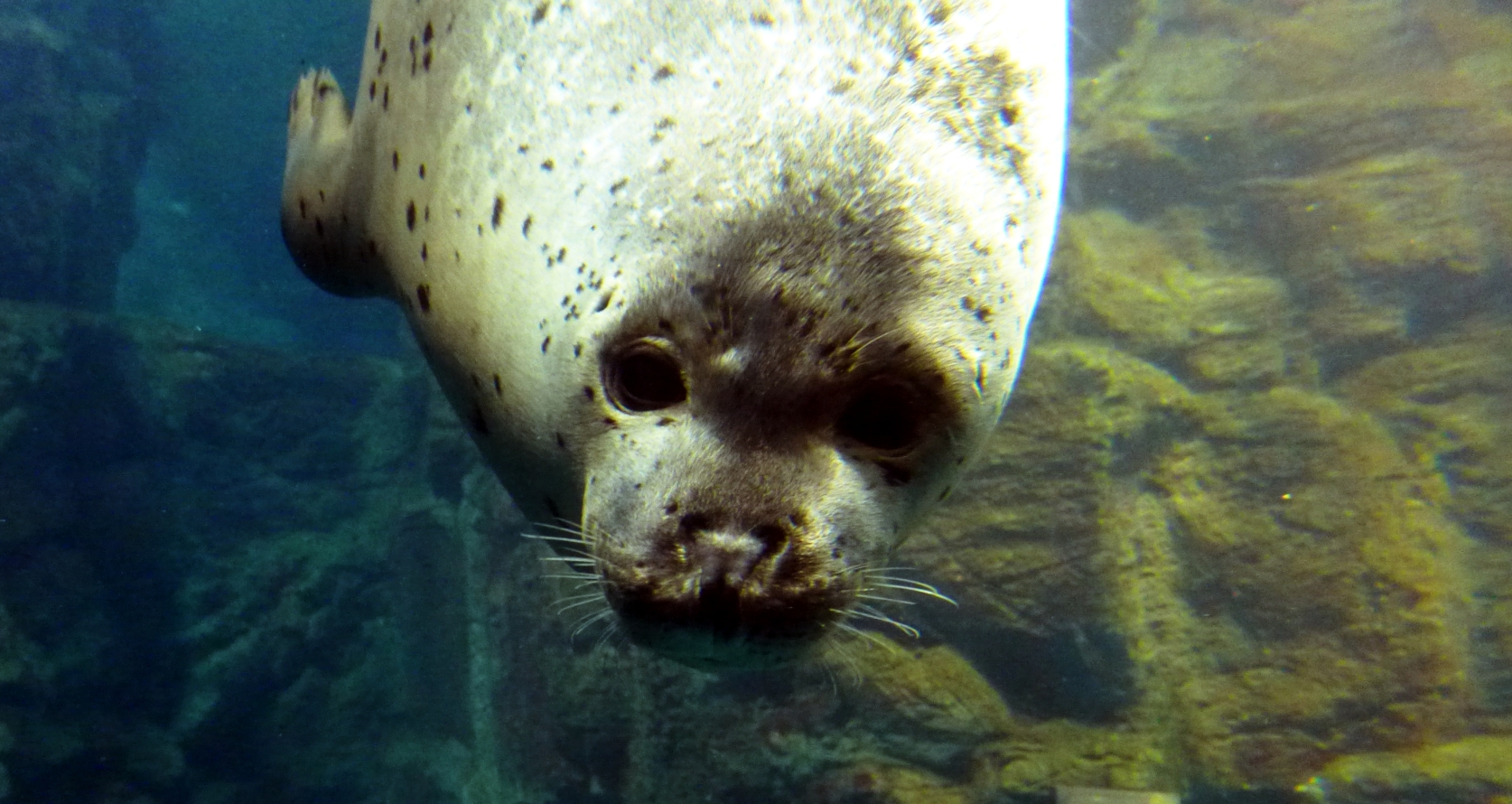 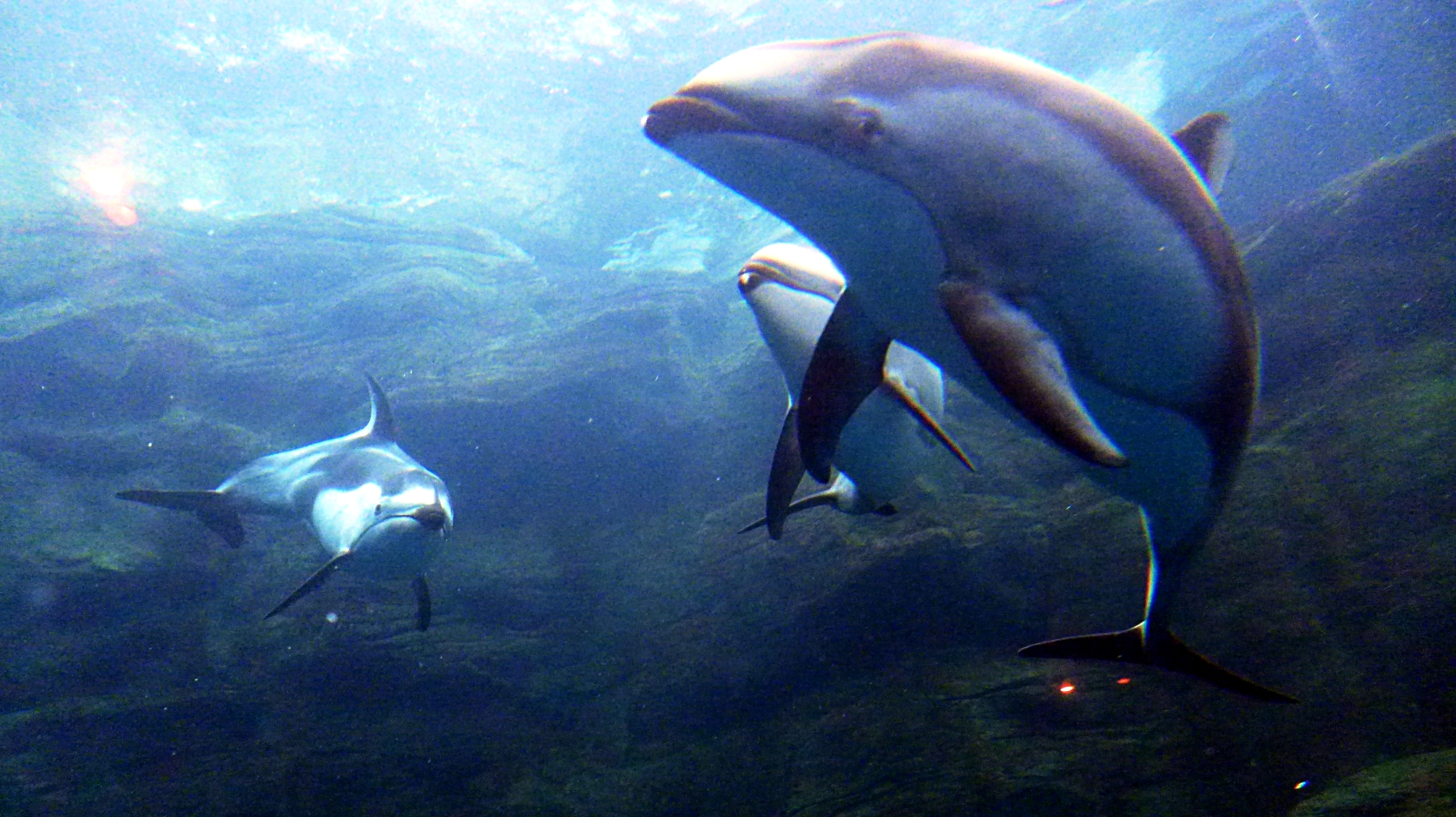 The largest tank is at the centre of the spiral. It is 9 metres deep and contains 5,400 cubic metres of water. The whale shark, the star of this tank, looked amazing. I’d already seen one at the other aquarium I visited in Yokohama (see here), but this time I got to see the whale shark much closer up which was incredible and breathtaking. Though keeping whale sharks in captivity seems (and probably is) cruel or unfair to the animal, it really helps to educate people about these creatures and encourages us to consider conservation – there were many signs near the whale shark tank talking about conservation and avoiding polluting the oceans.

The glass for the big tanks was very thick. There was a small exhibition showing a piece of the acrylic glass used in the aquarium. They use acrylic glass, also known as plexiglass, as it is much easier to shape and it is very tough. The aquarium uses 103 panes of this acrylic glass, weighing a total of 314 tonnes. The largest single pane weighs 10 tonnes. It was amazing to think that everything looked so clear and undistorted despite the glass being so thick. 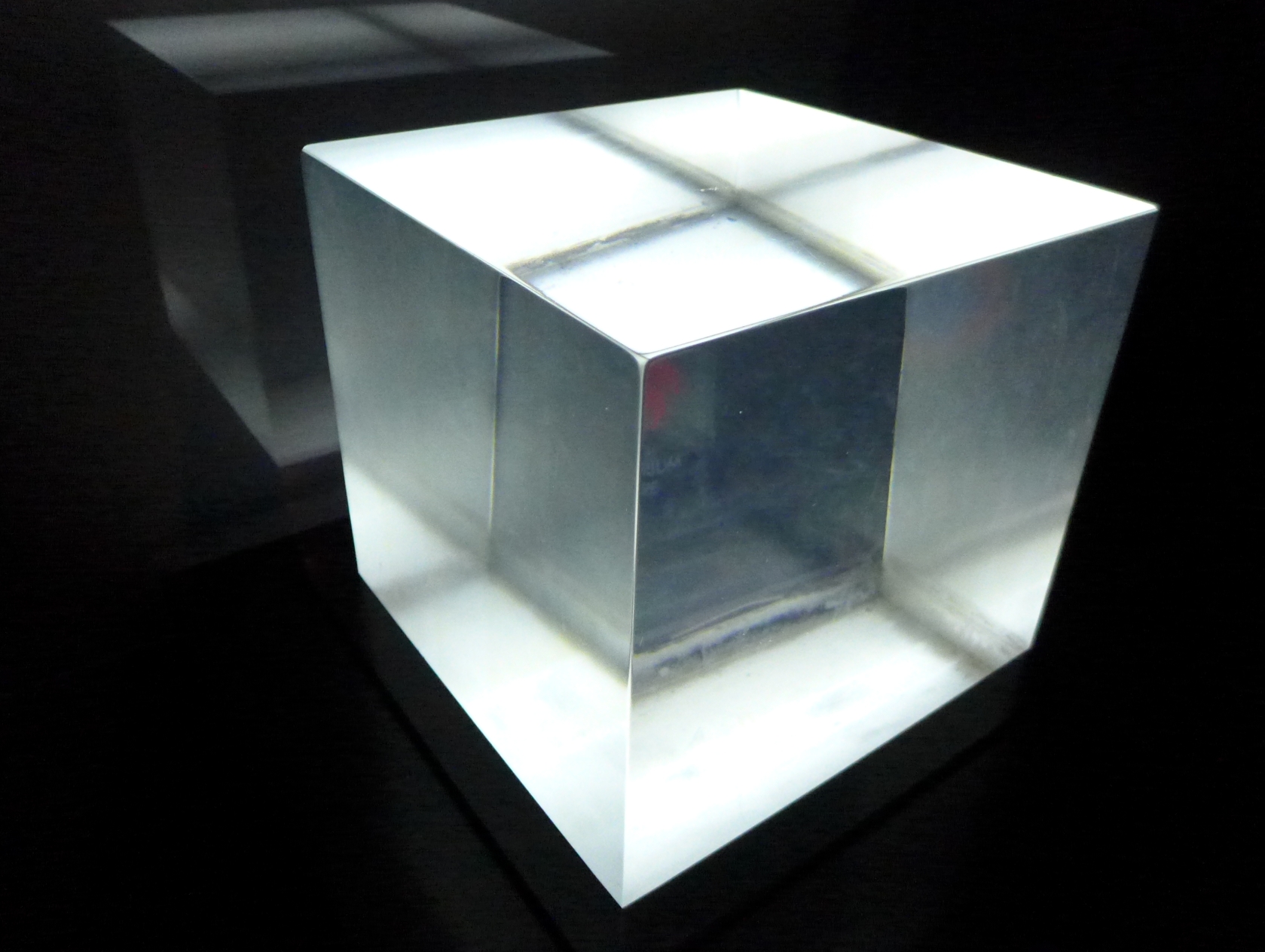 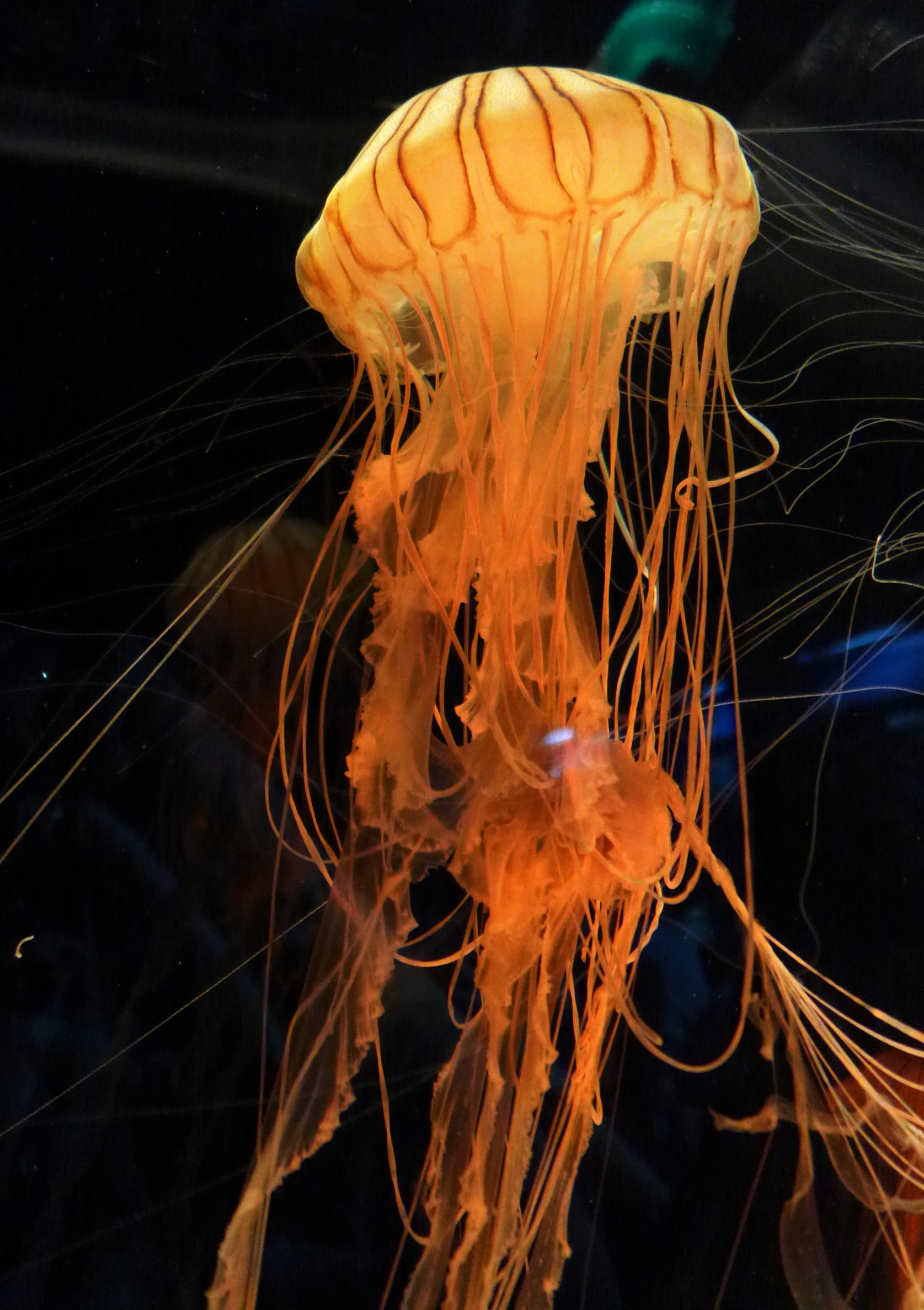 As well as the dolphins, seals, fish and whale shark, there were also penguins, jelly fish, otters and a sloth (not sure why). The otter exhibit was really cool as they were playing in see-through tubes, allowing us to see what they were doing. They seemed to be having a great time. The penguins were also great to see, one was staring at his own reflection in the side of the exhibit, seemingly talking to himself, which was amusing. 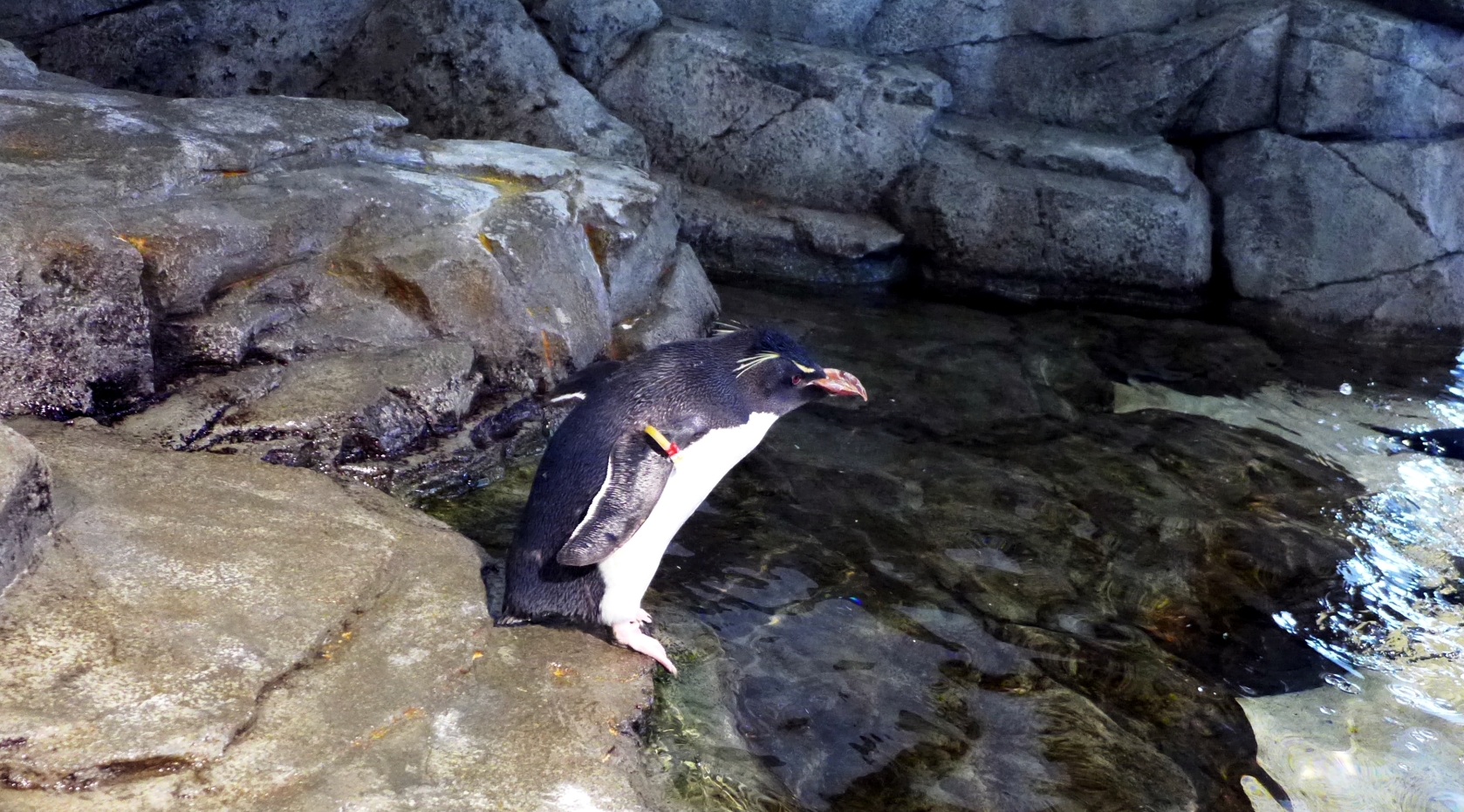 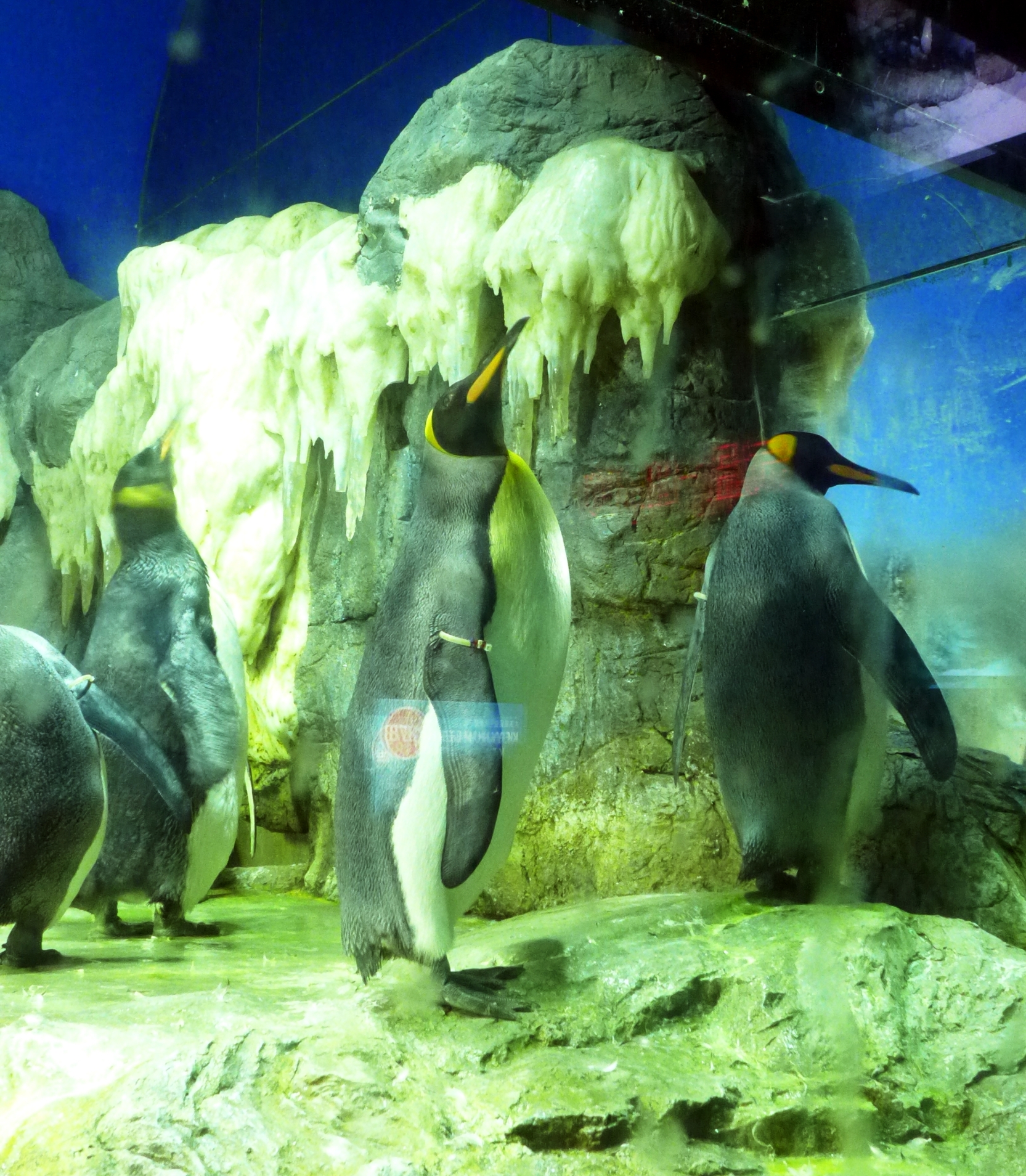 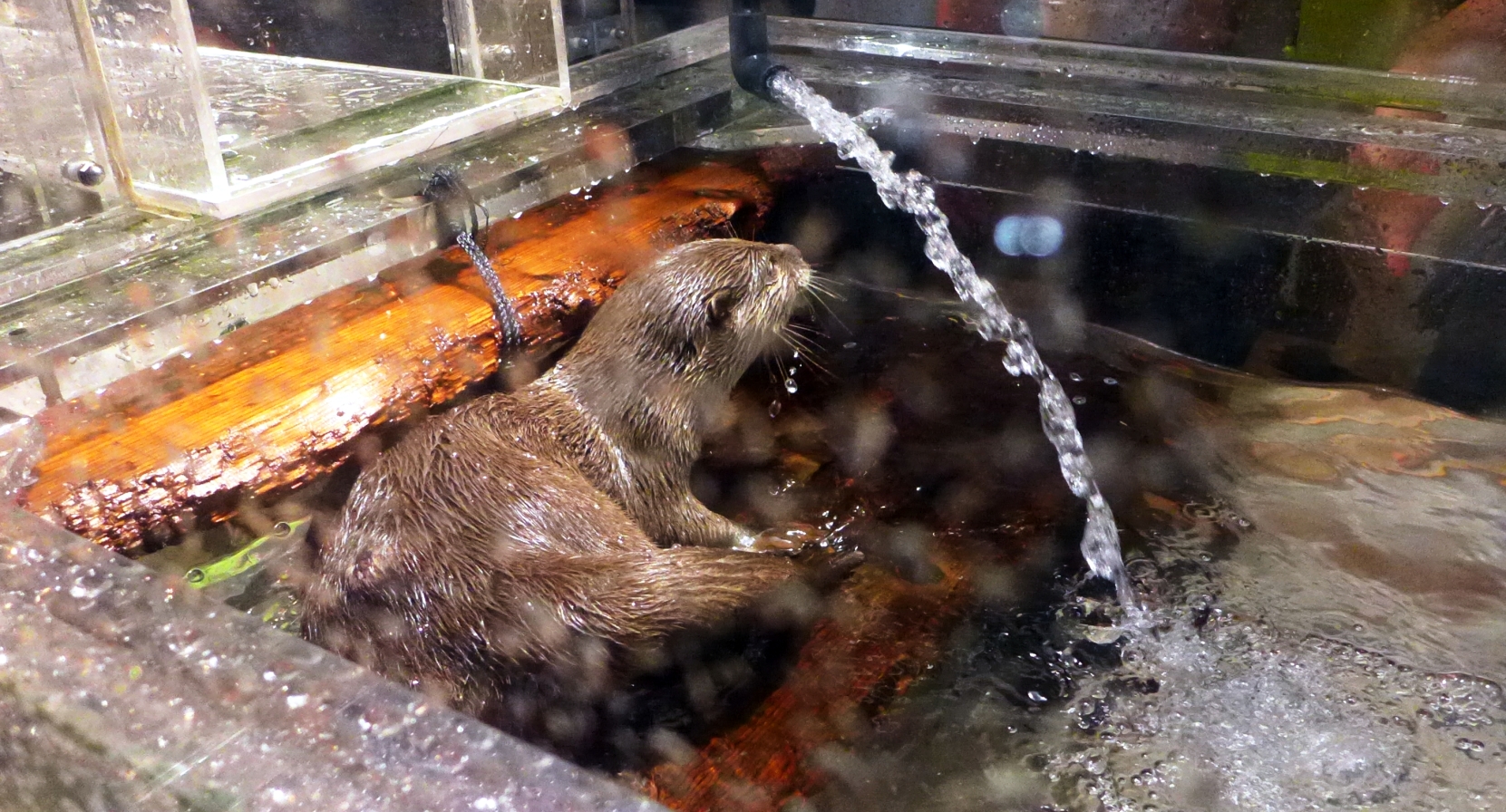 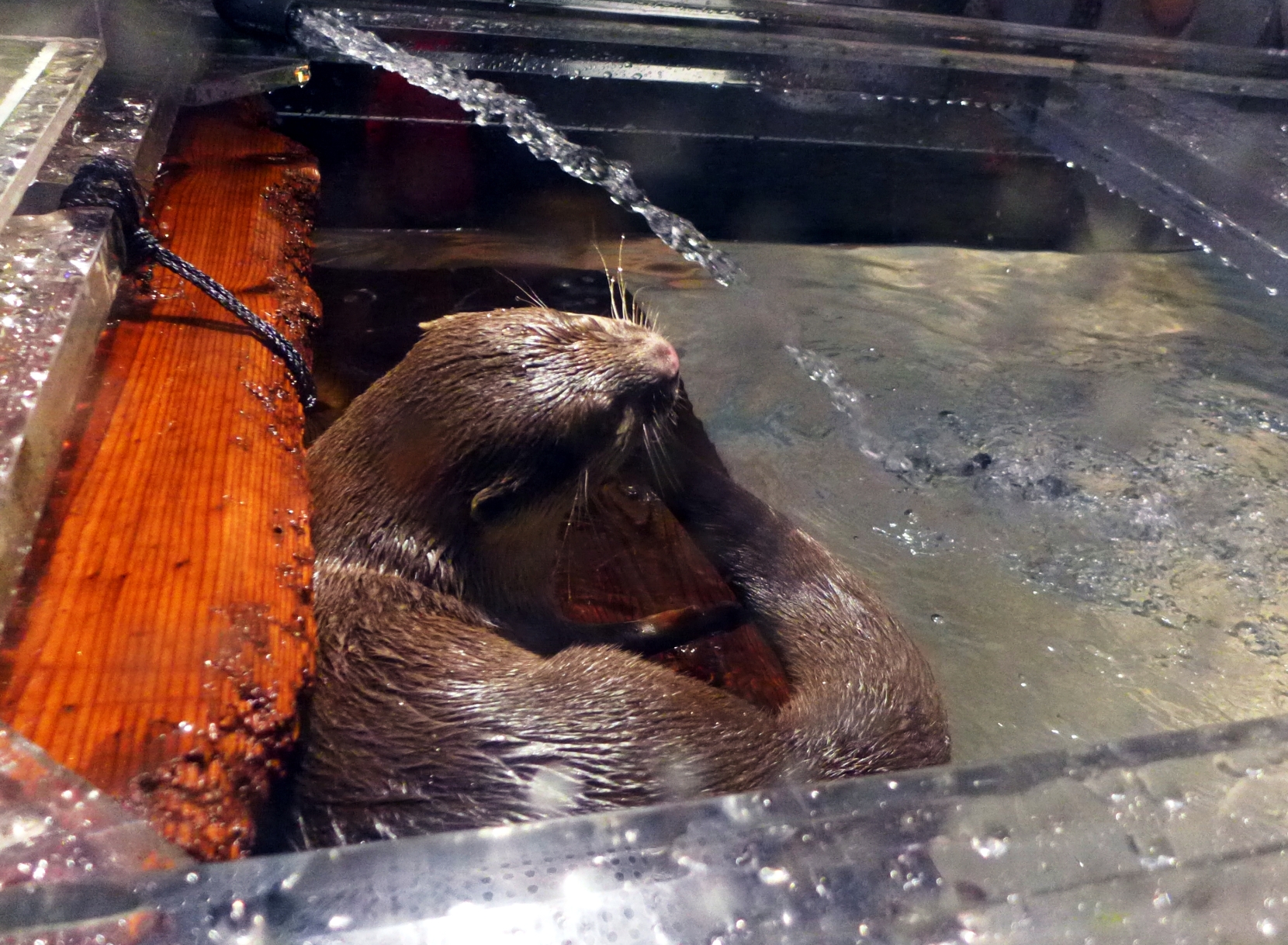 Though we had to line up for the first few tanks, as we spiralled down it became much easier to see everything. The aquarium can deal with a huge volume of people, though I’d suggest going on a weekday to avoid the crowds. It took us around 2 hours in total to go through the whole building.

While there we also visited the Tempozan Ferris Wheel 天保山大観覧車, which is located next-door to the aquarium. It was the tallest ferris wheel in the world from 1997 – 1999, when Tokyo’s Daikanransha Ferris wheel took the title. It was a great ride that gave us a great view over all of Osaka and of the aquarium building itself. I would recommend it if you go to the aquarium. You can get an idea of how big the entrance queues for the aquarium are from the pictures I took from the wheel too (though this was later in the day when it was even more busy). 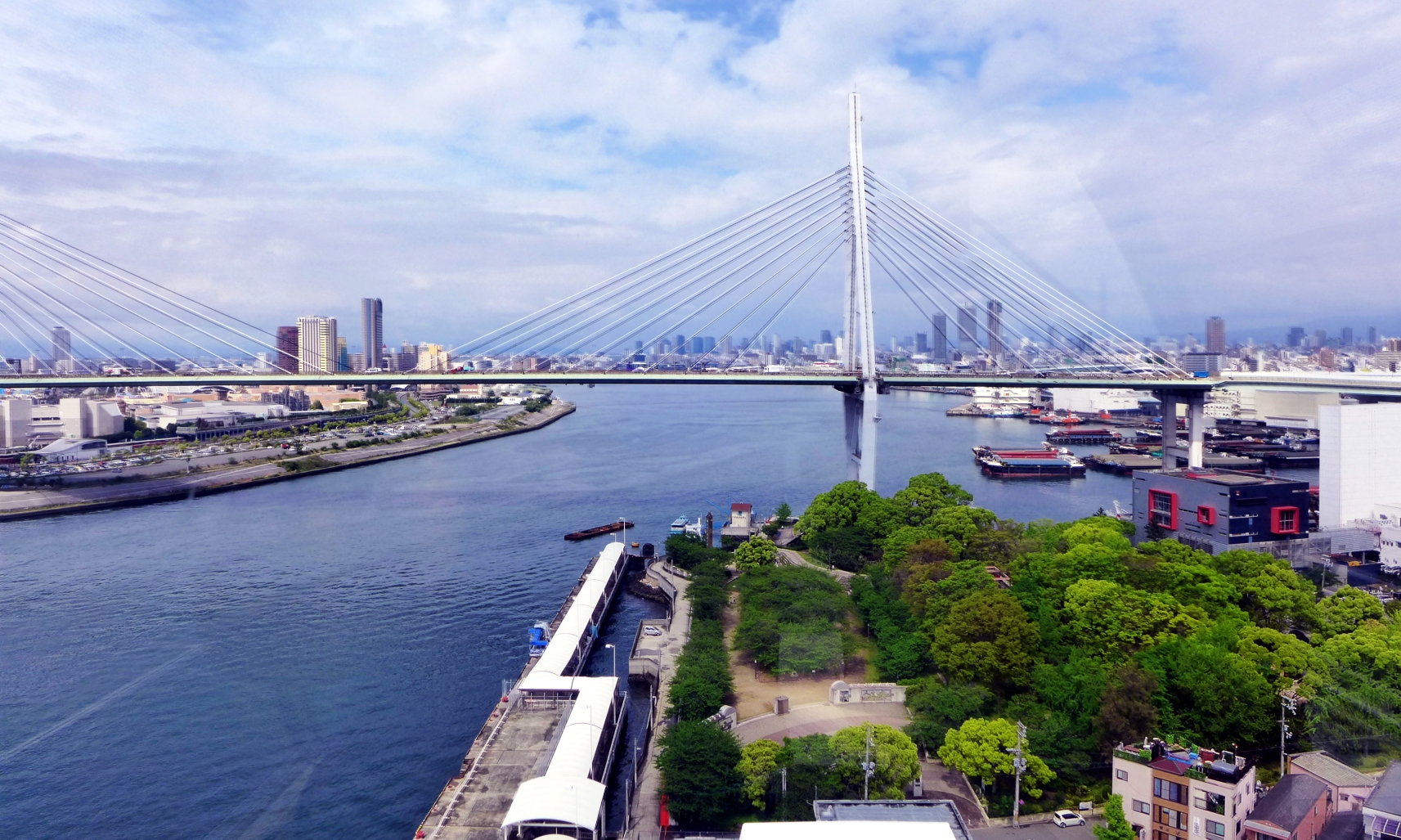 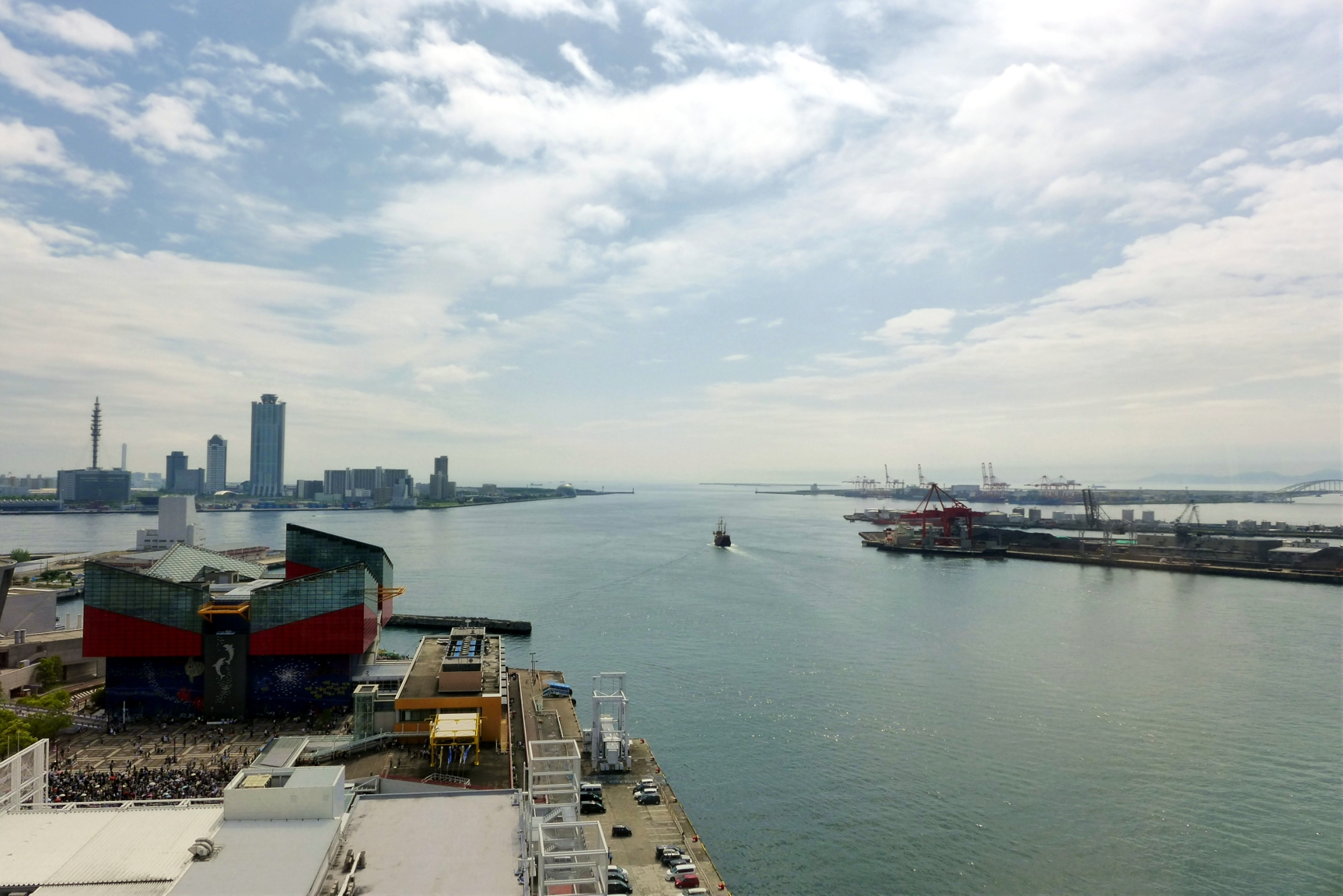 The aquarium and surrounding attractions can be accessed from Osakako station on the Chuo line. I would recommend going if you visit Osaka. It was very different to my other aquarium experience in Japan, both of which were very good, but for different reasons.