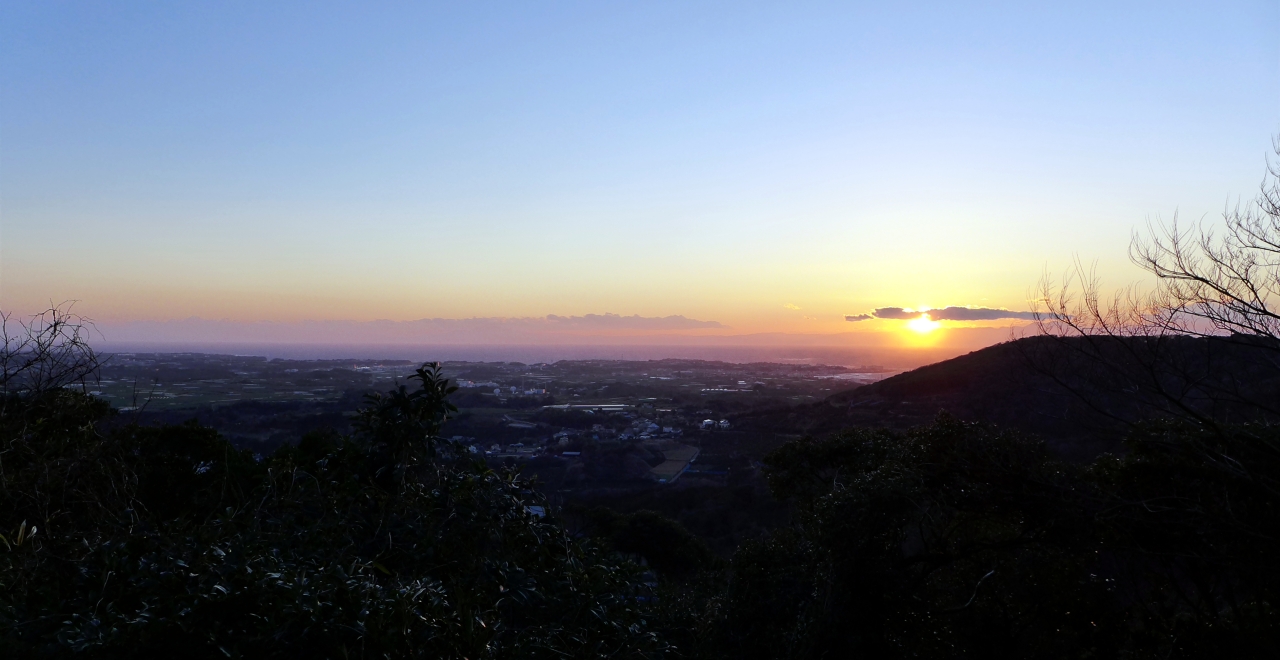 久しぶり！It’s been a long time! (久しぶり, hisashiburi, is something you say in Japan when you meet someone you haven’t seen in a while). You can blame my absence on my parents – they visited me from the 1st until yesterday (the 9th), and that, combined with the start of the spring semester at my university has left me with no time to write. I have been to see loads of cherry blossoms and I’ve nearly filled up my stamp book, so look forward to lots of blog posts in the near future!

Today I will pick up where I left off, in Yokosuka visiting my friend in March. I may choose to mix up the next few posts and alternate between Yokosuka and Kyoto, but we shall see what takes my fancy. This will be the story of the False Fuji.

When visiting Yokosuka I looked at Google maps for inspiration for a day out, something I do a lot and has led me to a lot of great adventures. I noticed a mountain to the south of us called 富士山, Mt Fuji. Clearly the real Mt Fuji is not in Yokosuka, I checked it was in its proper place myself when I passed it on the Shinkansen on the way there. But there it was, Mt Fuji the 2nd. The lesser, the pretender. As I am nowhere near physically fit enough to make the 12 hour trip up the real Mt Fuji, we thought it would be fun to check out this one. That way I can honestly say that I have climbed Mt Fuji, just not the one everyone thinks about. 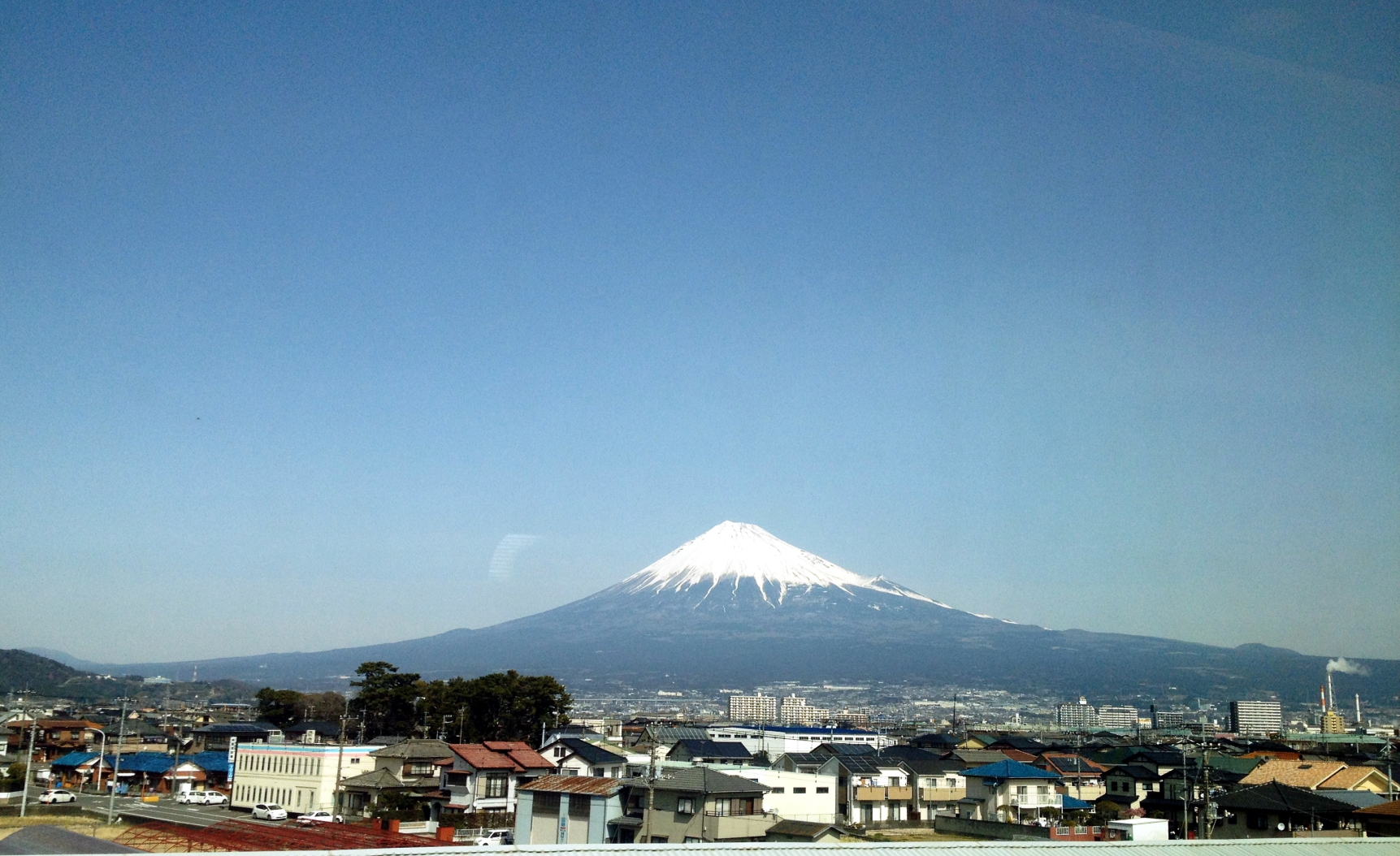 We made our way to the vicinity of Fuji 2.0, walking towards the mountain and looking for a way up. We noticed that sat atop the mountain was a figure. A rather familiar figure by now, it was yet another giant Buddha. This is my third giant Buddha since coming to Japan (one of which I saw in Hong Kong, the other in Kamakura). We managed to find the entrance to the way up the mountain, and discovered that it was a large mountainside graveyard. Undeterred, we climbed up to the Buddha anyway, enjoying the view from the path. 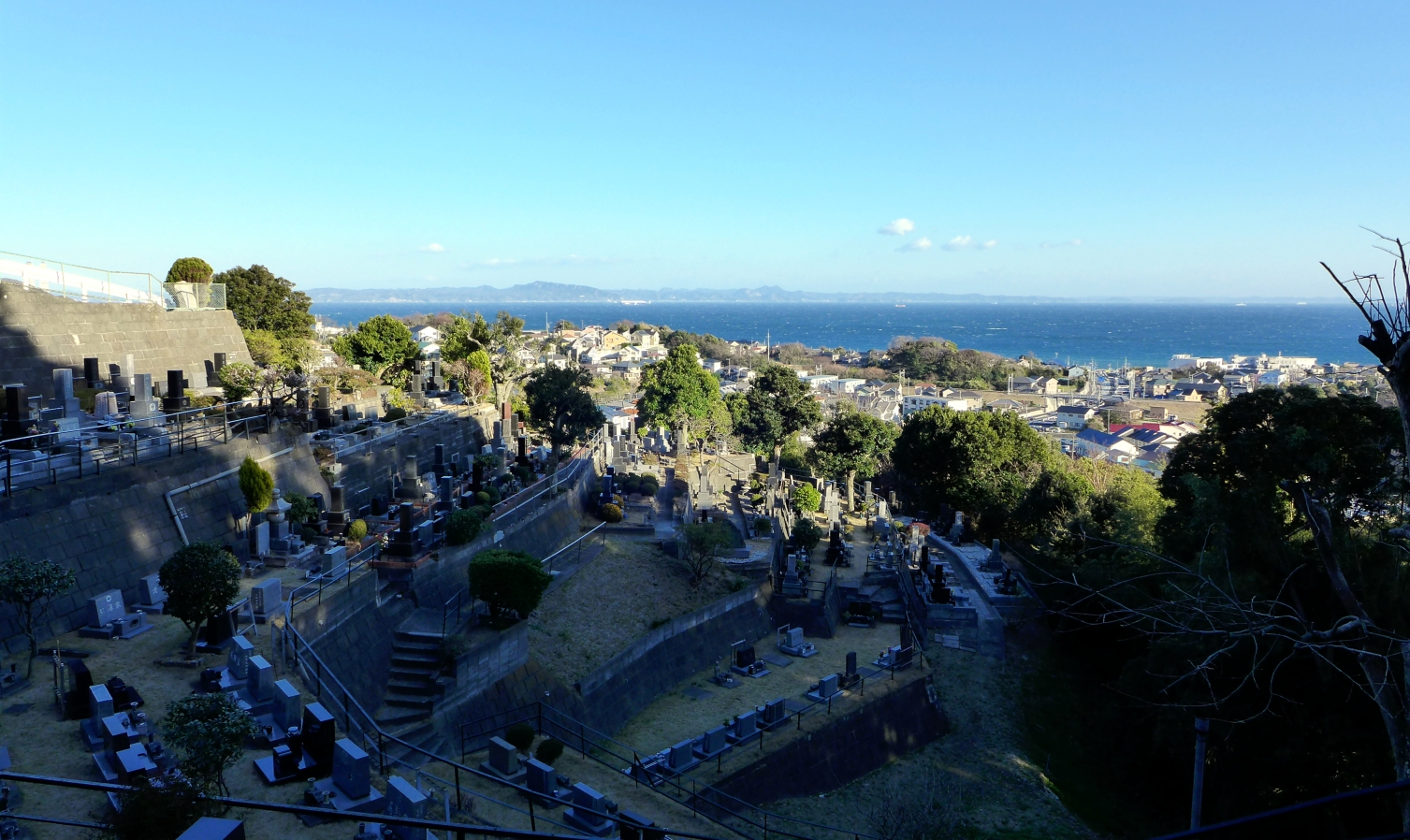 Japanese graves are not the same as those in the West; They  are often a small stone tower with wooden markers sticking out the back, and offerings of flowers and sake in front. I did some research into what the wooden markers signify and it turns out they are actually new names given to the deceased. The idea is that if you are given a new name when you die, if someone says your name you won’t come back to life (presumably as a terrible zombie). Temples charge for these names, and the higher your donation the more elaborate and cool-sounding your post-departure name is. One’s real name is also written on the gravestone, and sometimes even the name of one’s spouse is engraved while they are living to save money (one engraving is cheaper than two). The spouse’s name is painted in red to signify they are still living, and the red paint is removed when they die. It probably isn’t a great feeling to know your name is already written on your grave-stone, waiting for you. 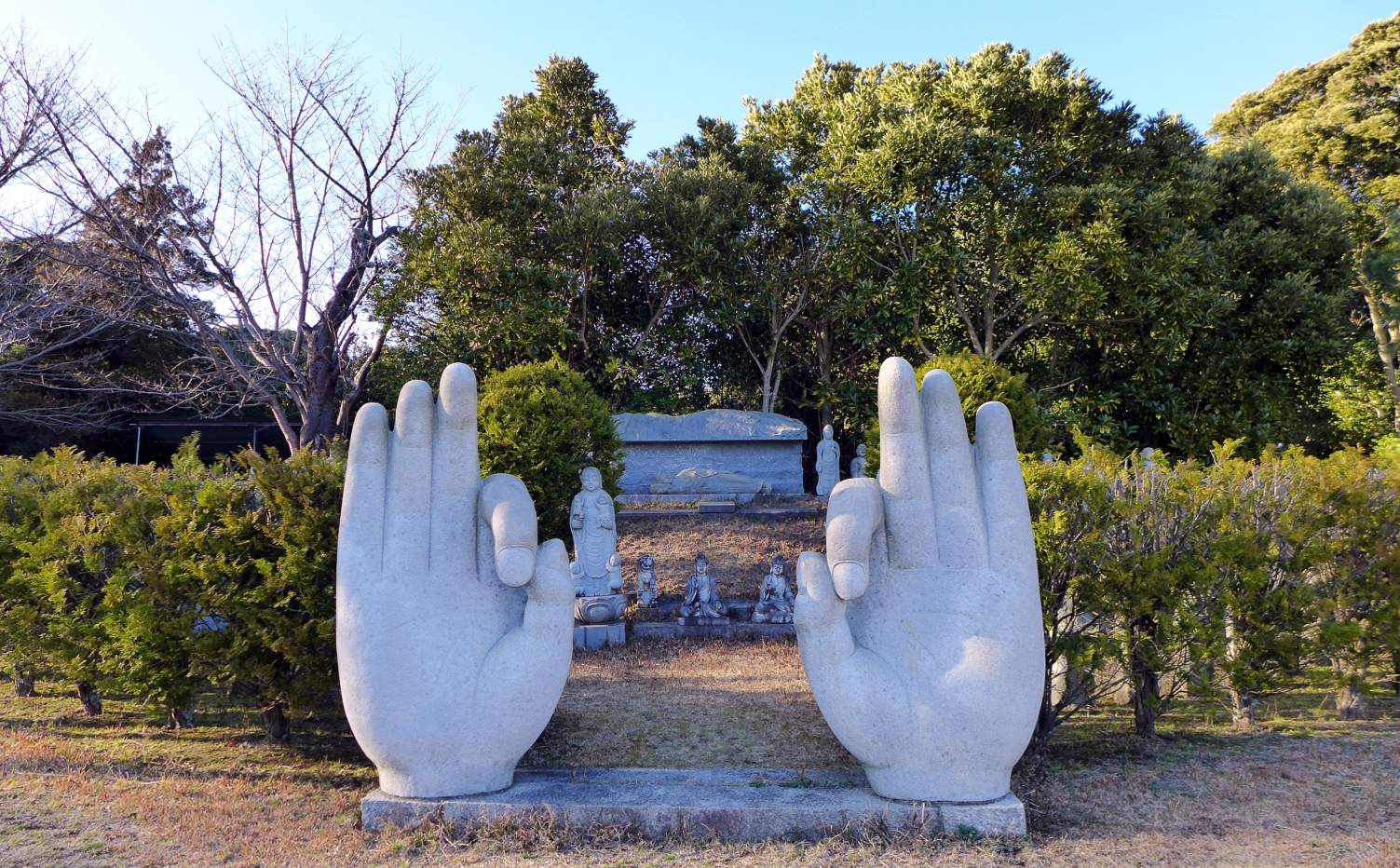 The graveyard was fairly uniform, which is hardly surprising as 91% of funerals in Japan are Buddhist. Japanese funeral customs are unique, and while a foreigner will probably never have to partake in a Japanese funeral, these customs are felt in every day life. There are a few things you should be careful to avoid doing in Japan, as they are considered a social faux-pas, and are very easy to do.

For example: Your mum wants to try some food on your plate, so you pass her the food from your chopsticks to hers. This reminds Japanese people of passing bones chopstick-to-chopstick in traditional Japanese post-cremation ceremony, so don’t do this. Later you go to a Ryokan, a traditional Japanese hotel, and you are given a yukata, a lightweight kimono-style garment, to wear. You cross the two flaps over right over left, not thinking about it. Soon, a Japanese person sees you and helps you correct it to left over right. This is because only the dead wear their kimono right over left. In addition, sticking your chopsticks vertically into your rice is also reminiscent of offerings of food to the dead, which is offered with the chopsticks in this position, so best to avoid doing that as well. As you can see, you learn a lot about Japanese funeral customs from daily life in Japan without ever going to one. 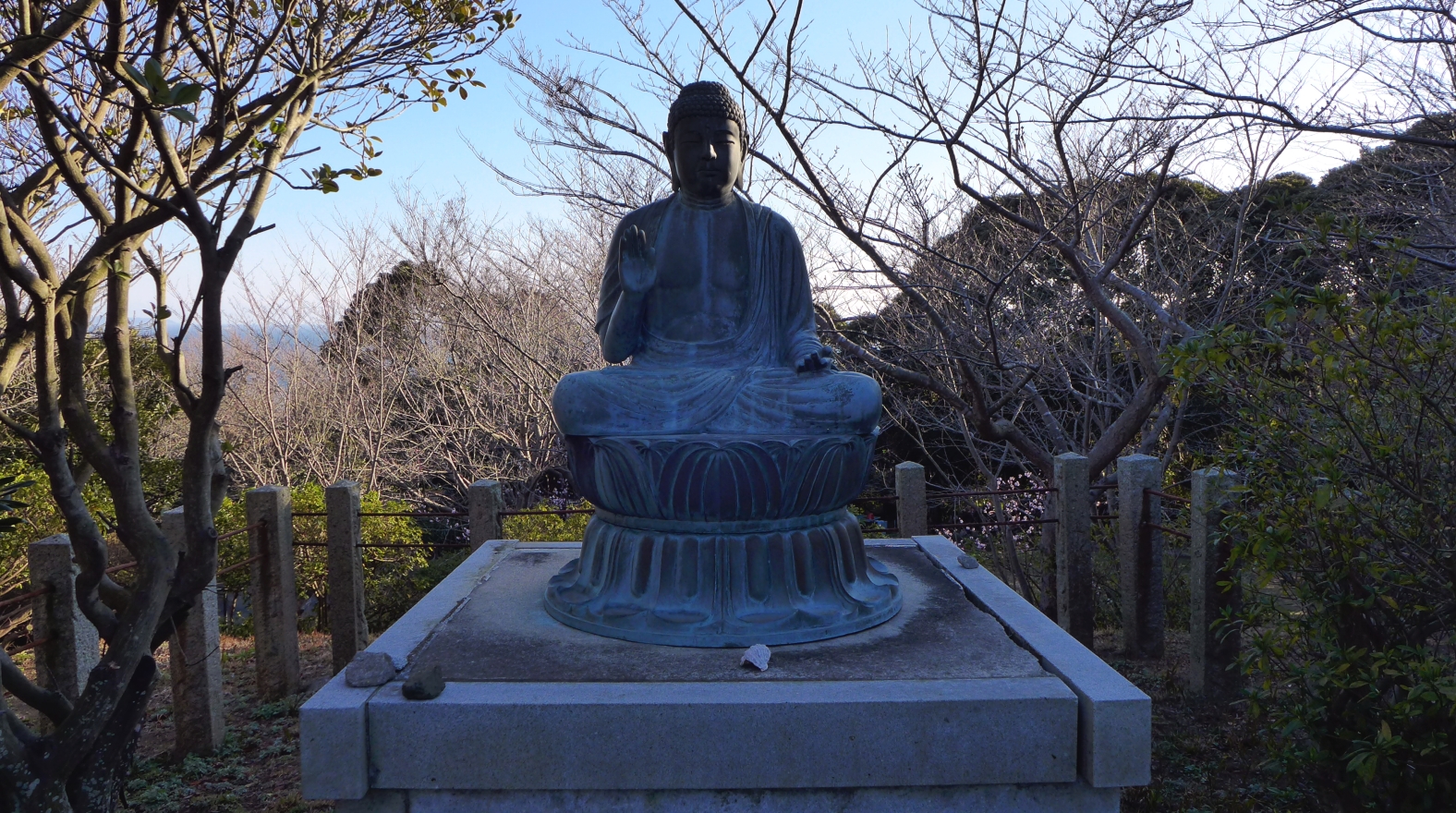 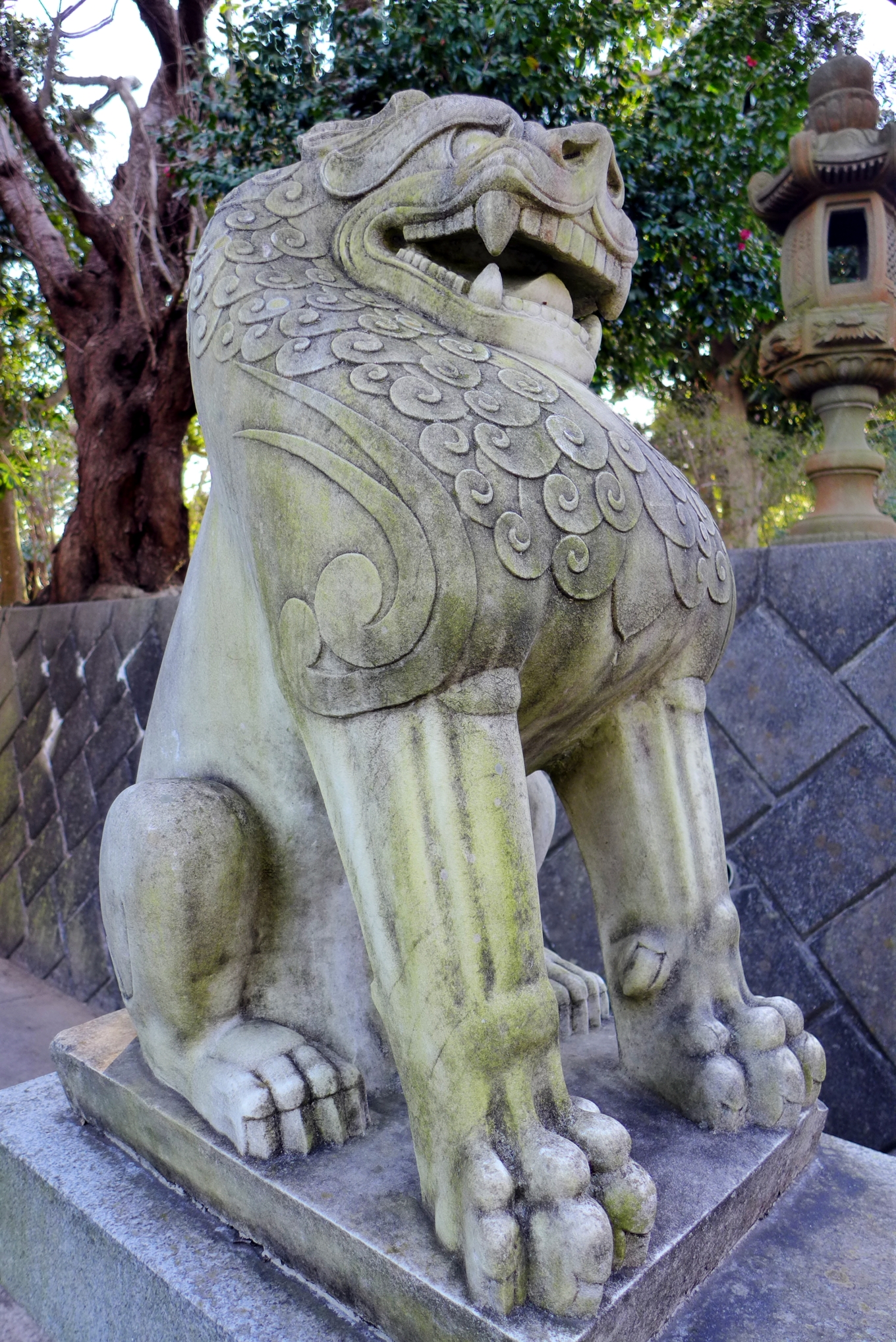 I would recommend the film Departures (おくりびと) for anyone who wants to know more about Japanese funeral customs. While it is a morbid topic, it’s interesting seeing how other cultures deal with death, and the film itself is actually light-hearted, funny and has beautiful cinematography. I strongly recommend it, even if you have no interest in the funeral practices, and it’s won several awards, so I’m not alone in this recommendation.

We made it up to the top of the hill and discovered a pagoda and the large Buddha statue. The statue watched over the graveyard and looked out to sea, giving the sense that the graveyard was in safe hands. Under the Buddha was a gated hall, and the inside seemed to be a well kept lobby or a vault. We were unsure what was inside but it seemed like it could be a secret spy den, or illuminati related. Or something related to Buddhism and funerals, but I still think it was suspicious. It was guarded by two demon-like statues that seemed determined to keep people out. 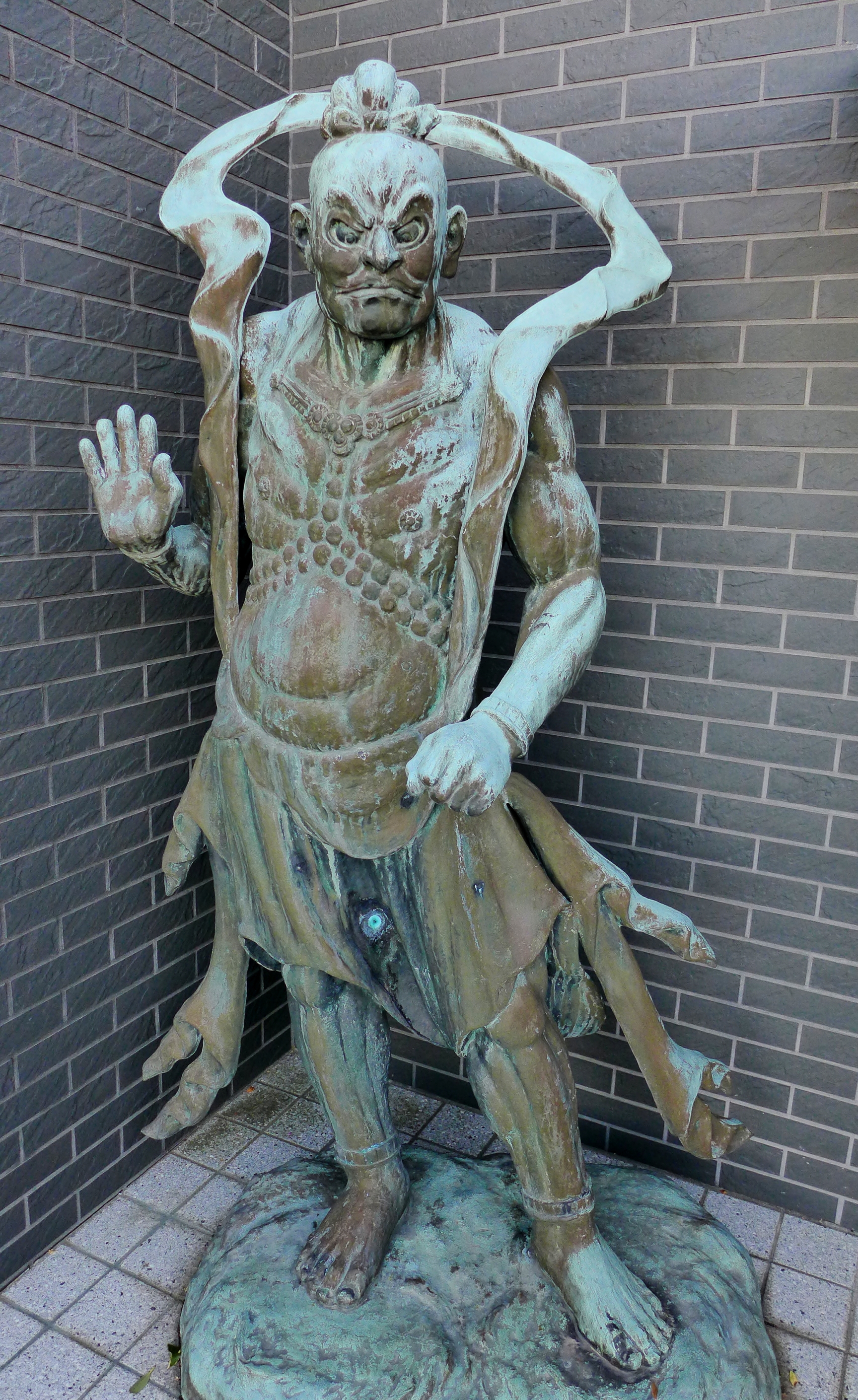 They even had a memorial for pets, which was a really nice thing to see, though it made me sad, as my family dog, Jasper, died a few weeks prior. The inscription just says ‘thank you, thank you’ and there was a memorial wall next to it with pets’ names and the date. It was a lovely way of remembering pets and the joy they brought their families. 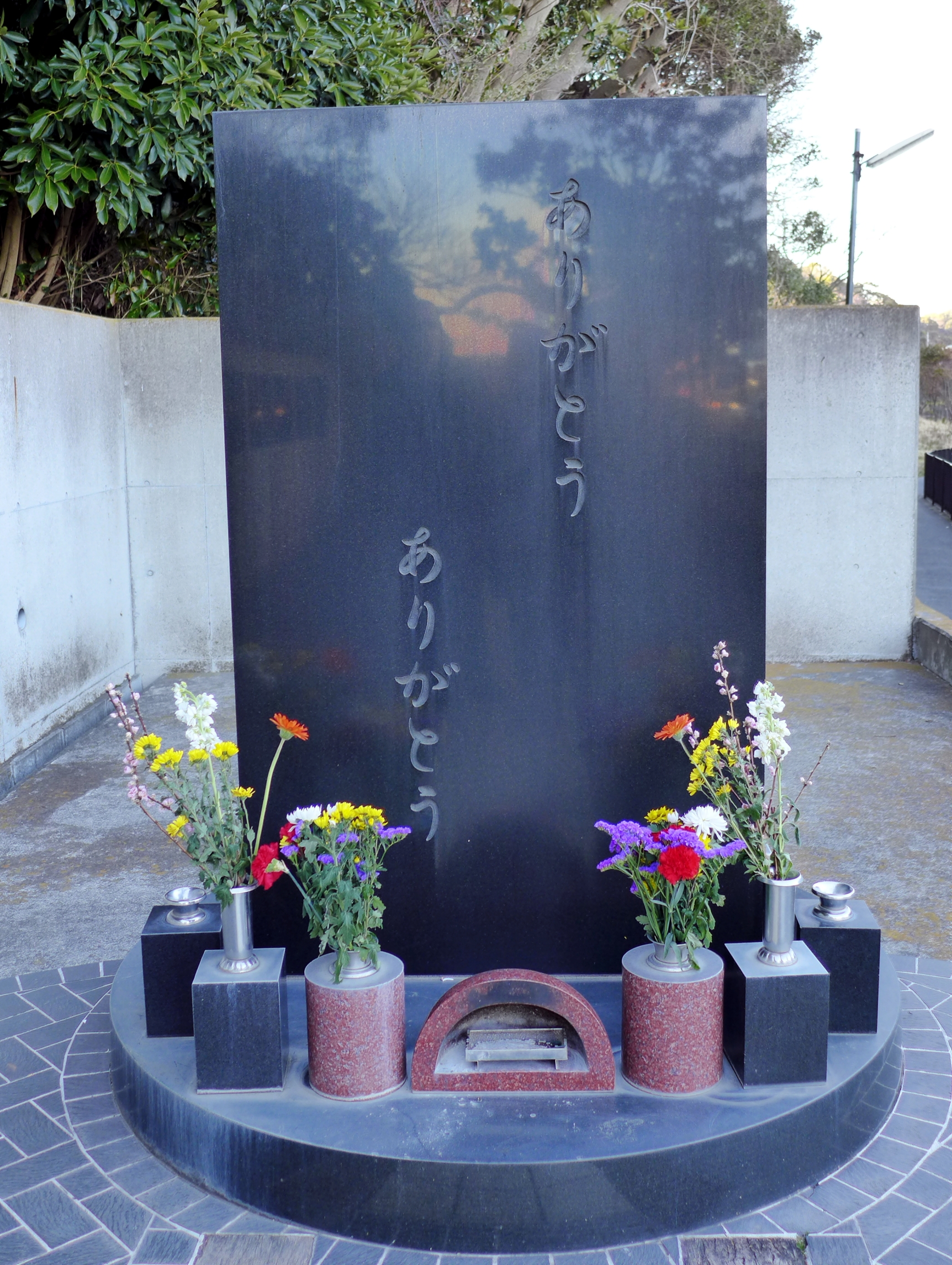 Once we’d climbed that mountain we decided to head round to see if there was another path up. On the way round we came across a place that made statues – graves, statues for gardens, and a pair of rather… intimate, statues. I’ll let you spot them. 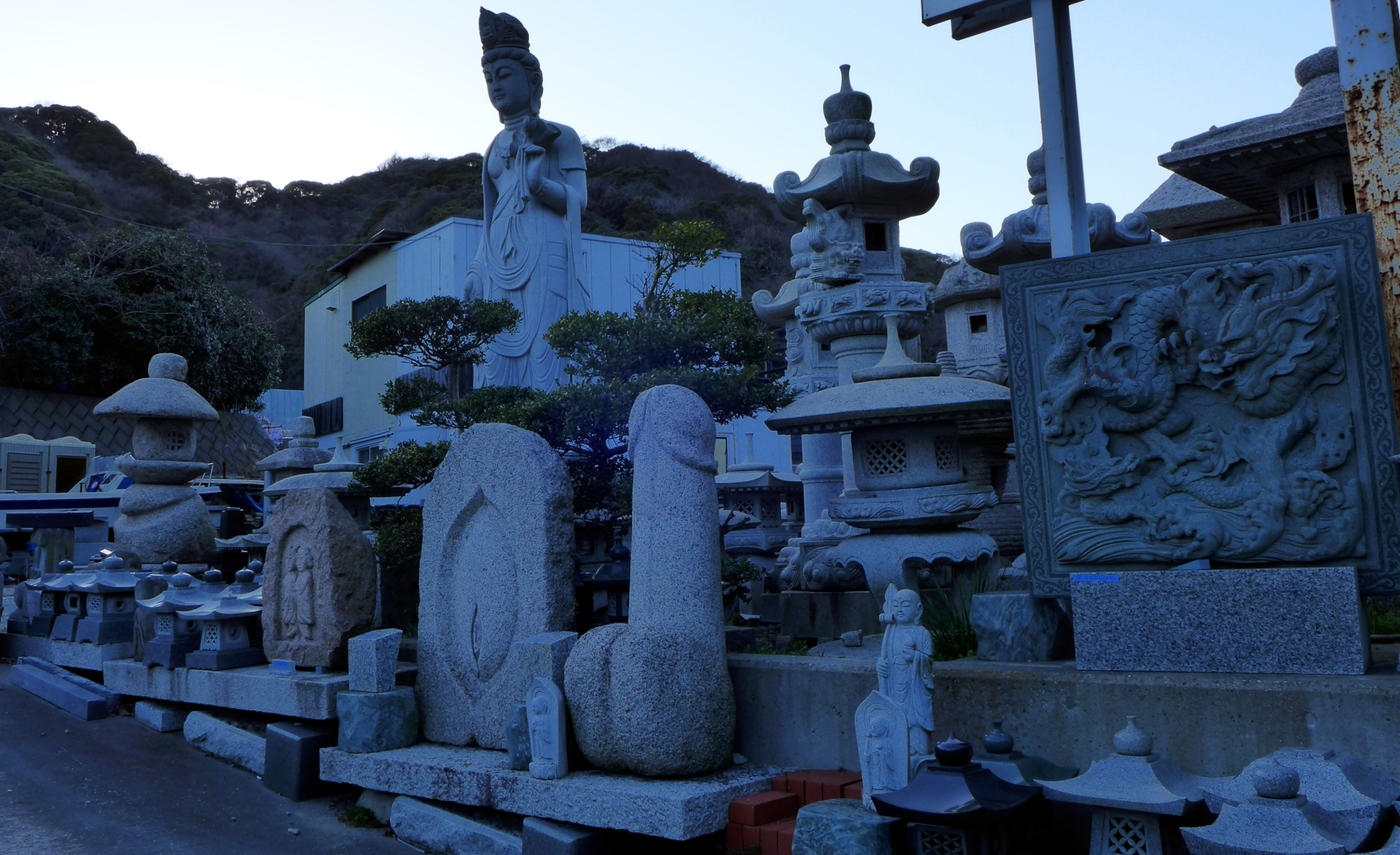 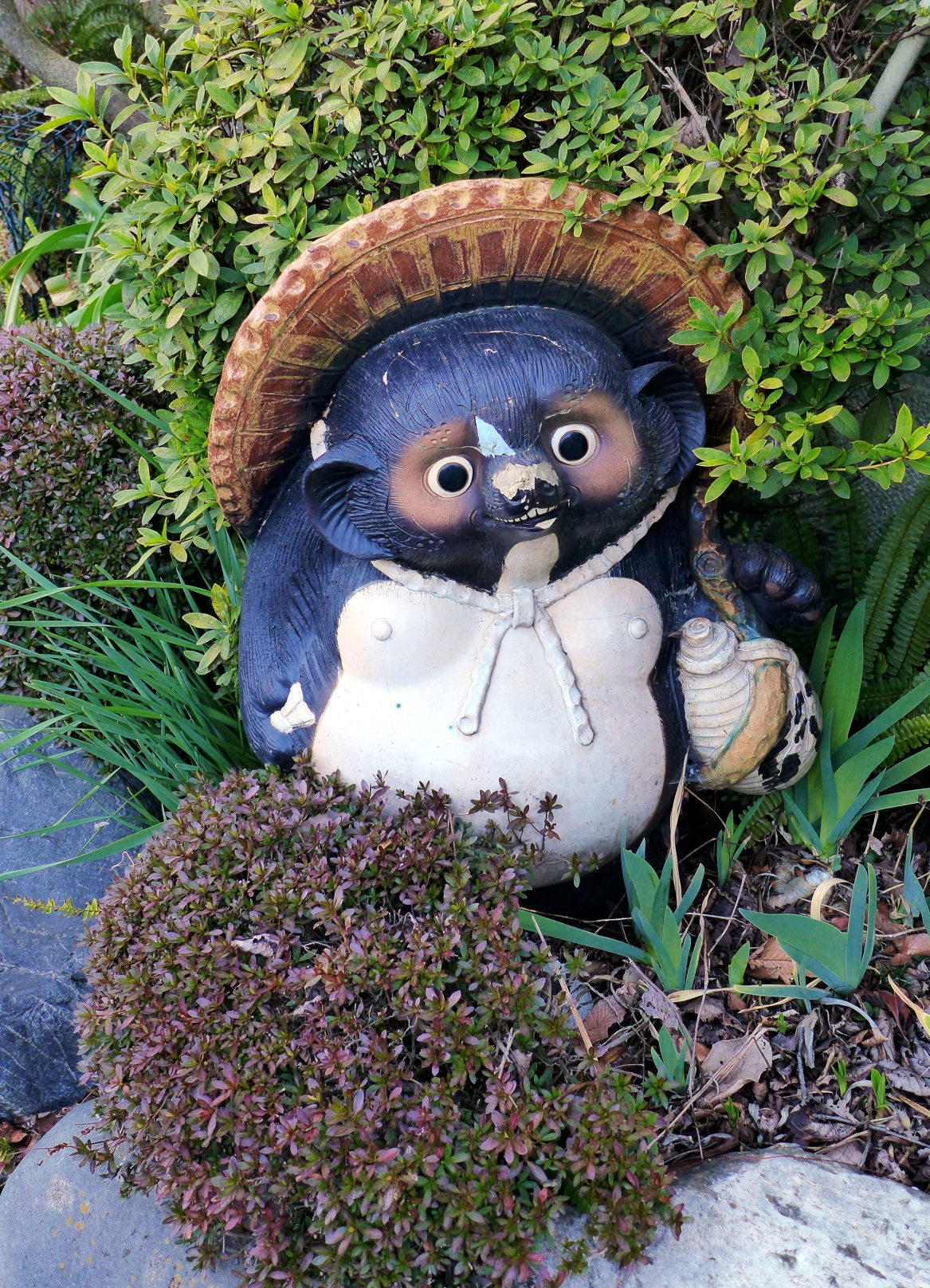 I wanted to see the shrine that was on the other side of the mountain (according to Google maps), but it turned out to not be a real shrine but a collection of old statues in the woods and a stone alter at the peak. We climbed up False Fuji, a little slowly as it was steep, muddy, and I’m pathetic, making it up in time to see the sunset from the top. I think had the sun been out of the way, we would have been able to see the real Mt Fuji from the top. Many mountains in Japan are named ‘Fuji’ or have ‘Fuji’ in their names if you can see the famous mountain from the top. 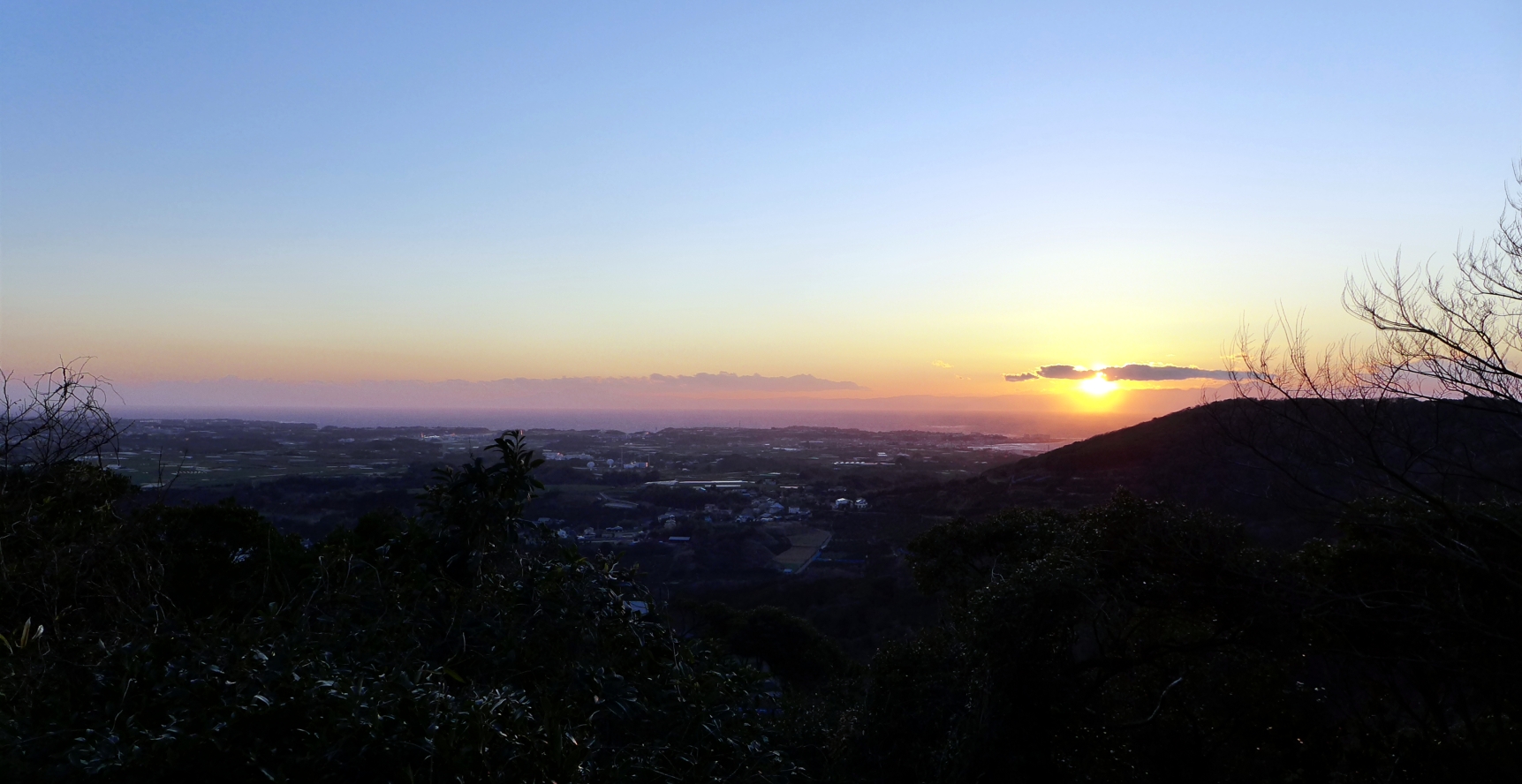 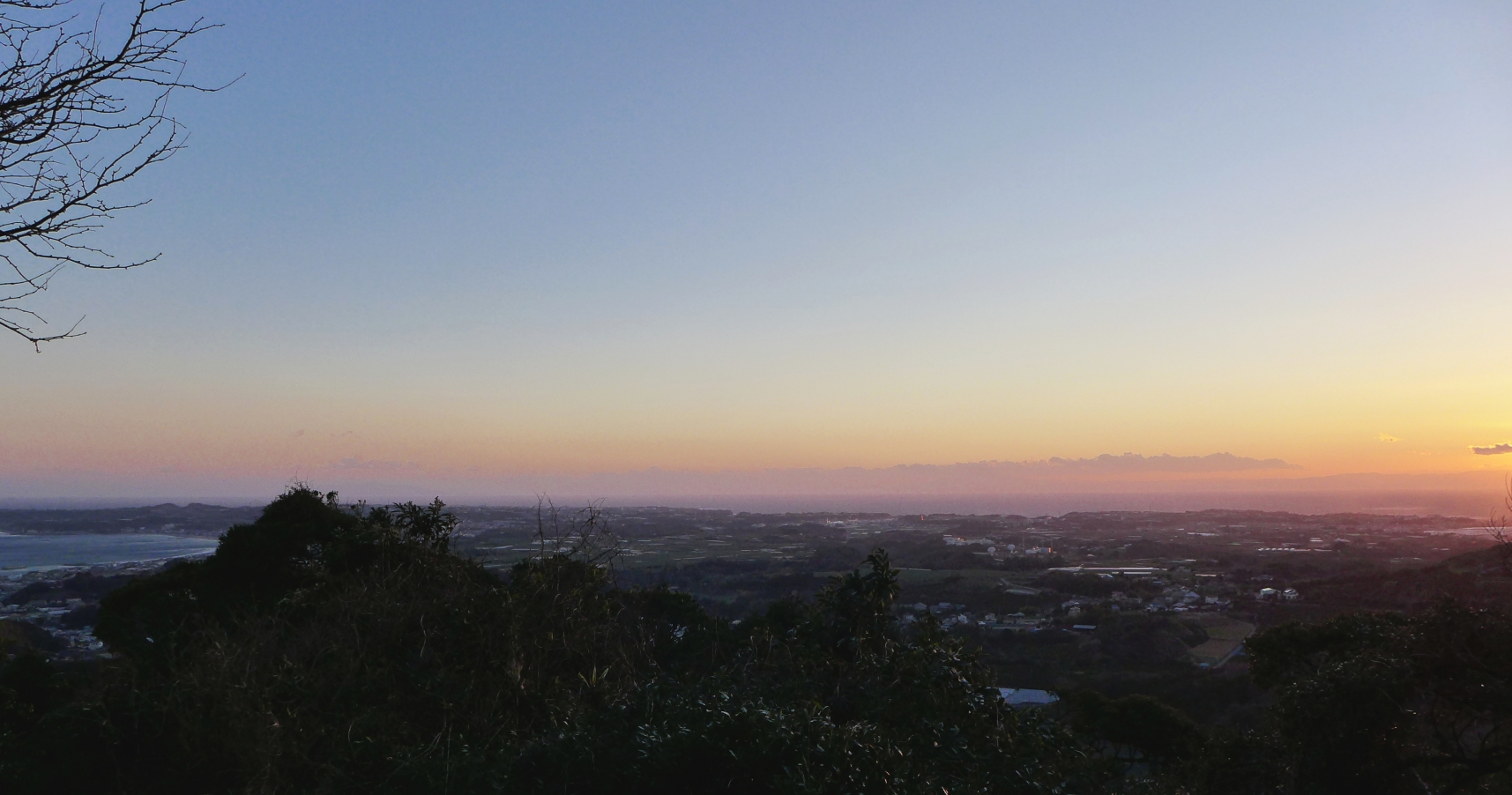 We made it down the mountain just before it got really dark, taking it slowly as the steps were uneven and very muddy. I really enjoyed getting off the beaten track and going on an adventure, especially as it turned out to be a great experience.