And so we plunge into December, and I begin to freeze in my woefully lacking-in-central-heating room. My air con does heat, but it also doesn’t seem to know what 21 degrees is and aims for more like 30 degrees, leaving me perpetually too hot or too cold.It seems Japan  missed the memo that central heating is actually a pretty good idea.

This minor issue aside, I look forward to my first Christmas in Japan, and it seems Japan’s looking forward to it too – there are Christmas lights and decorations everywhere. Hopefully my next month will be filled with fun things to write about even though its getting cold.

Also exciting news blog-wise: I now have my own domain – Japangie.com! I had to buy a storage upgrade because of all the pictures I’m hosting on here and it came with a domain which is pretty cool.

For now lets mop up those bits and pieces from last month that have been sitting by waiting their turn for some attention. This will be a miscellany of temples, interesting buildings, Christmas lights and food, so I hope you enjoy some snapshots of what I’ve been up to.

Here are a few more pictures of the koyo (turning of the leaves) in Kyoto. This month was definitely koyo month for my blog – beautiful red leaves everywhere. Sadly it rained recently and most of the red leaves were blown away, so no more picturesque temples with autumn colouring I’m afraid.

These pictures were taken in the park nearby, by the Kamo River and near the Heian Jingu. 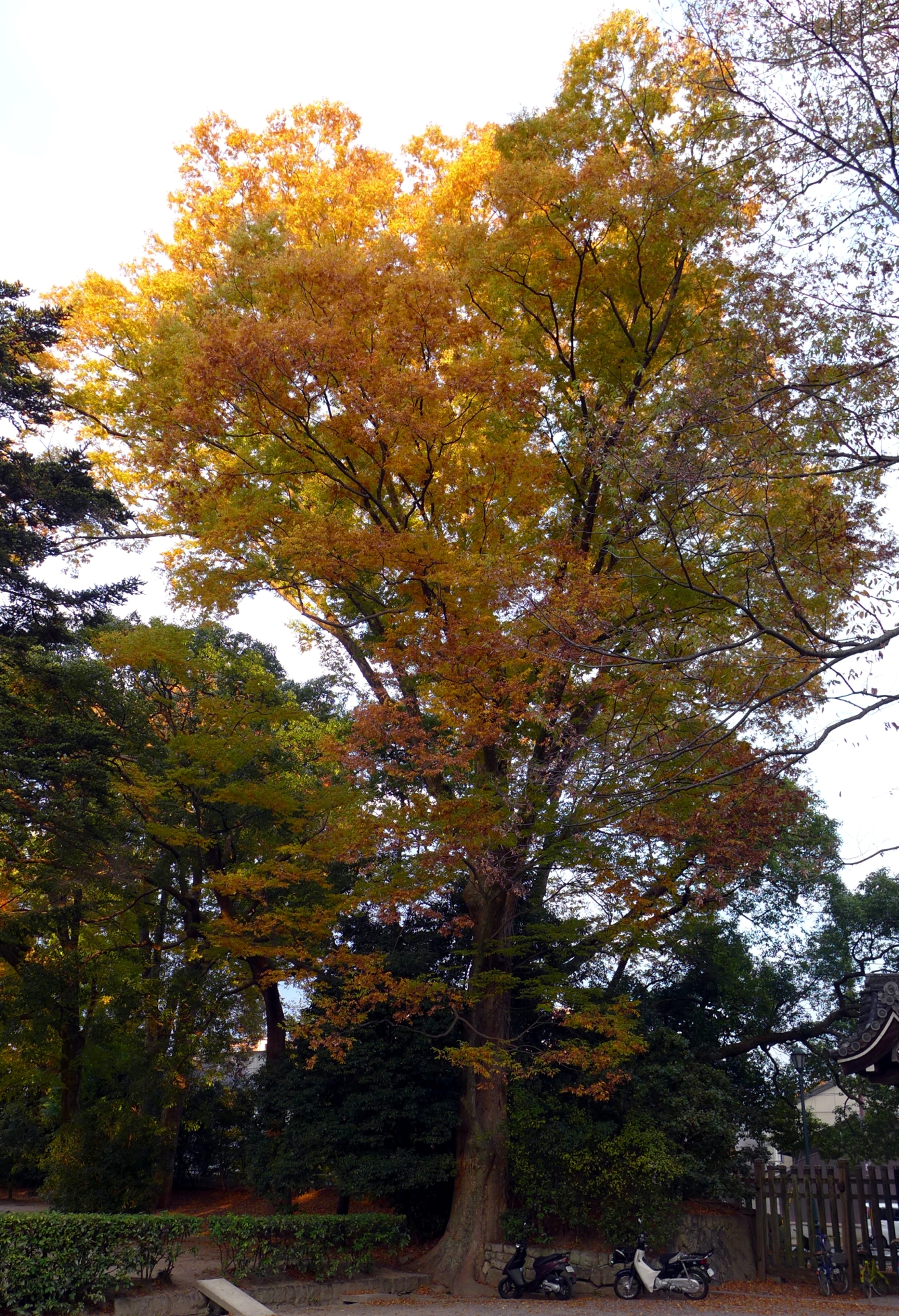 I came across this building on my way to Heian Jingu. I initially thought it was a temple and went in to check it out. It turns out it’s actually a dojo, and not only that but its the oldest martial arts training hall in Japan, built in 1899. At this dojo  you can train in most Japanese martial arts – Akido, Judo, Kendo, Karate etc. as well as ping-pong for some reason. Apparently they are pretty foreigner friendly (though they don’t speak English you’re still welcome to go) and offer one-off classes, so if you’re into martial arts you can train in a beautiful old dojo as part of your trip to Japan!

This is yet another interesting building I found when I was wandering around Heian Jingu. This is a temple belonging to the Nichiren sect of Buddhism, founded in the 15th Century. It has been rebuilt several times – monks from Enryaku-ji burned down Myoden-ji in 1536 as part of Tenbun Hokke no Ran which was basically a war between the three main sects of Buddhism in Kyoto. The Tendai monks burned down temples like Myoden-ji for their affiliation to Nichiren Buddhism (Nichiren Buddhism was in competition with Tendai for taxing the people and owning land). In the process they also burned down over half of Northern Kyoto and a lot of Southern Kyoto too. So much for the peaceful teachings of Buddhism…

The current Myoden-ji was built in 1708. I couldn’t find anyone to stamp my book (it was after hours) but I had a quick look around. 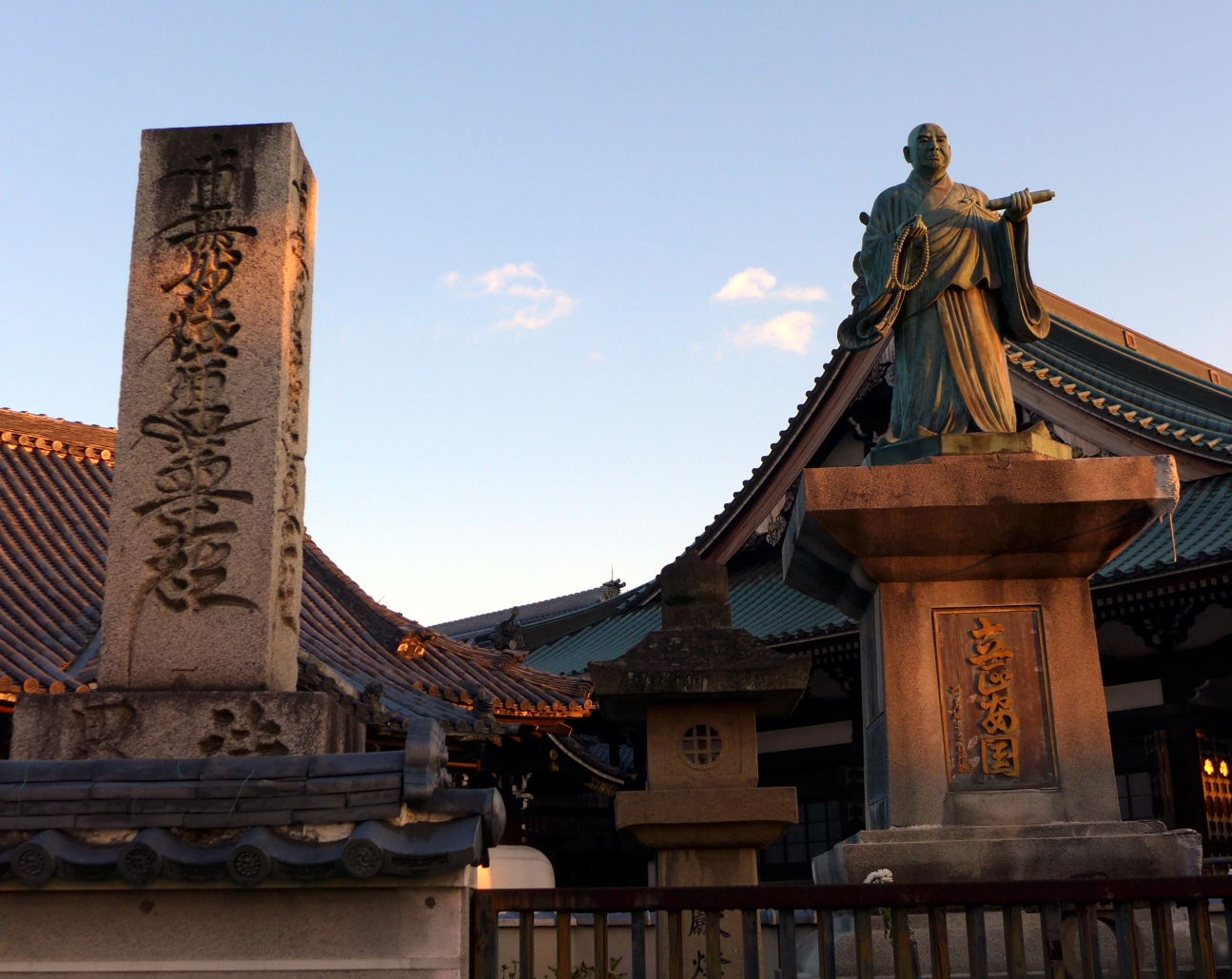 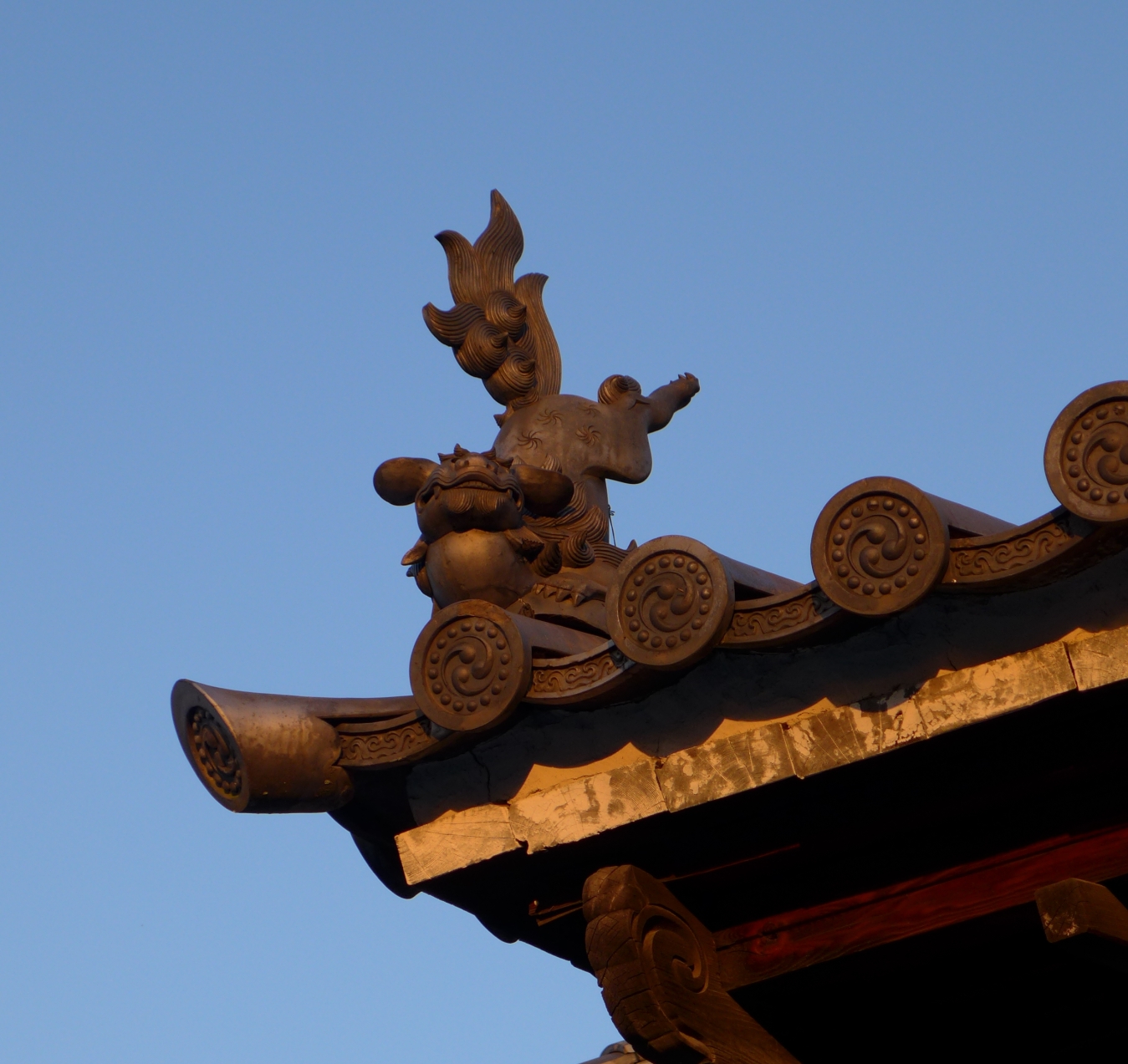 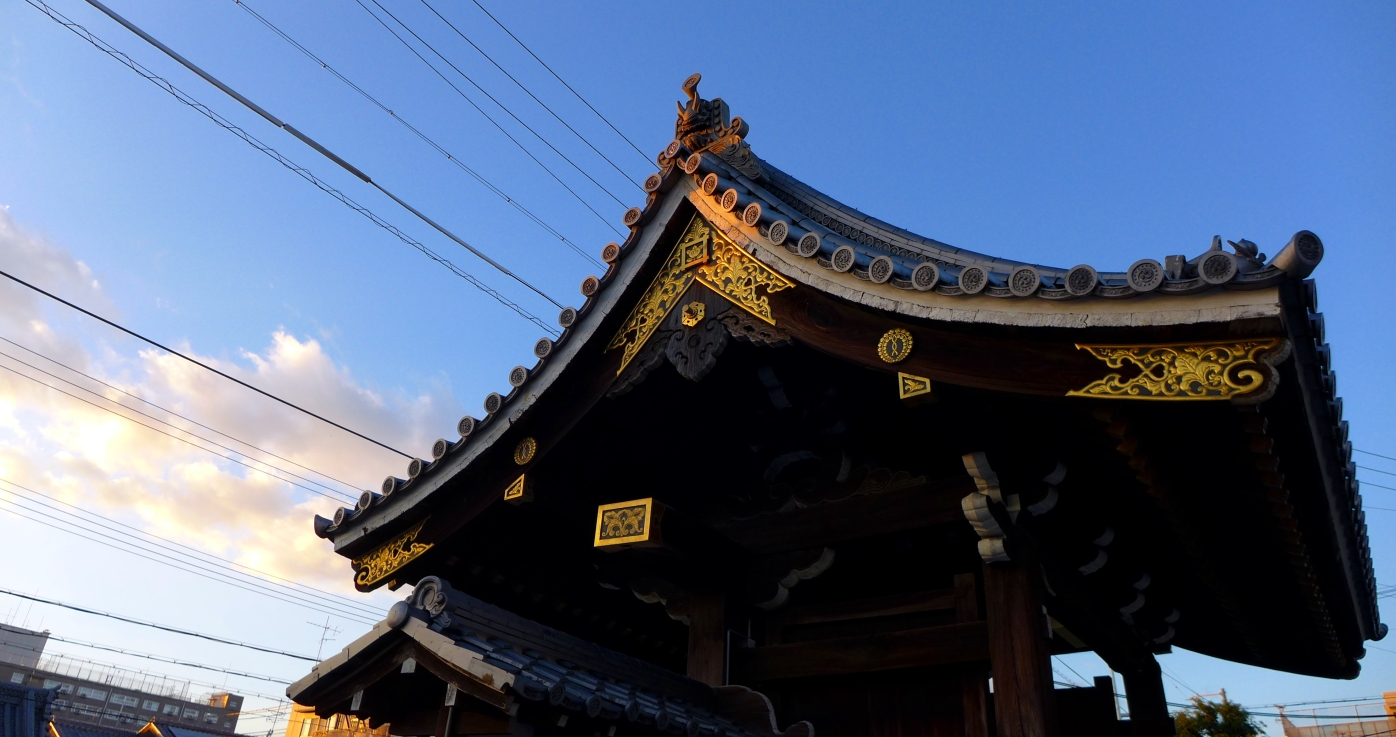 This small shrine is opposite Heian Jingu, and I don’t think it gets many visitors as everyone wants to see Heian Jingu instead. I decided to go in and have a look because I think even small shrines are interesting to look around. This is one of the many sub-temples dedicated to Inari, the god of foxes and rice (the god of Fushimi Inari). The temple did have a Shuin so I got my book stamped. As it is a smaller temple the stamp is very simple – just the name of the shrine, the word ‘worship’ and the date – no fancy calligraphy but still nice to remember the shrine. 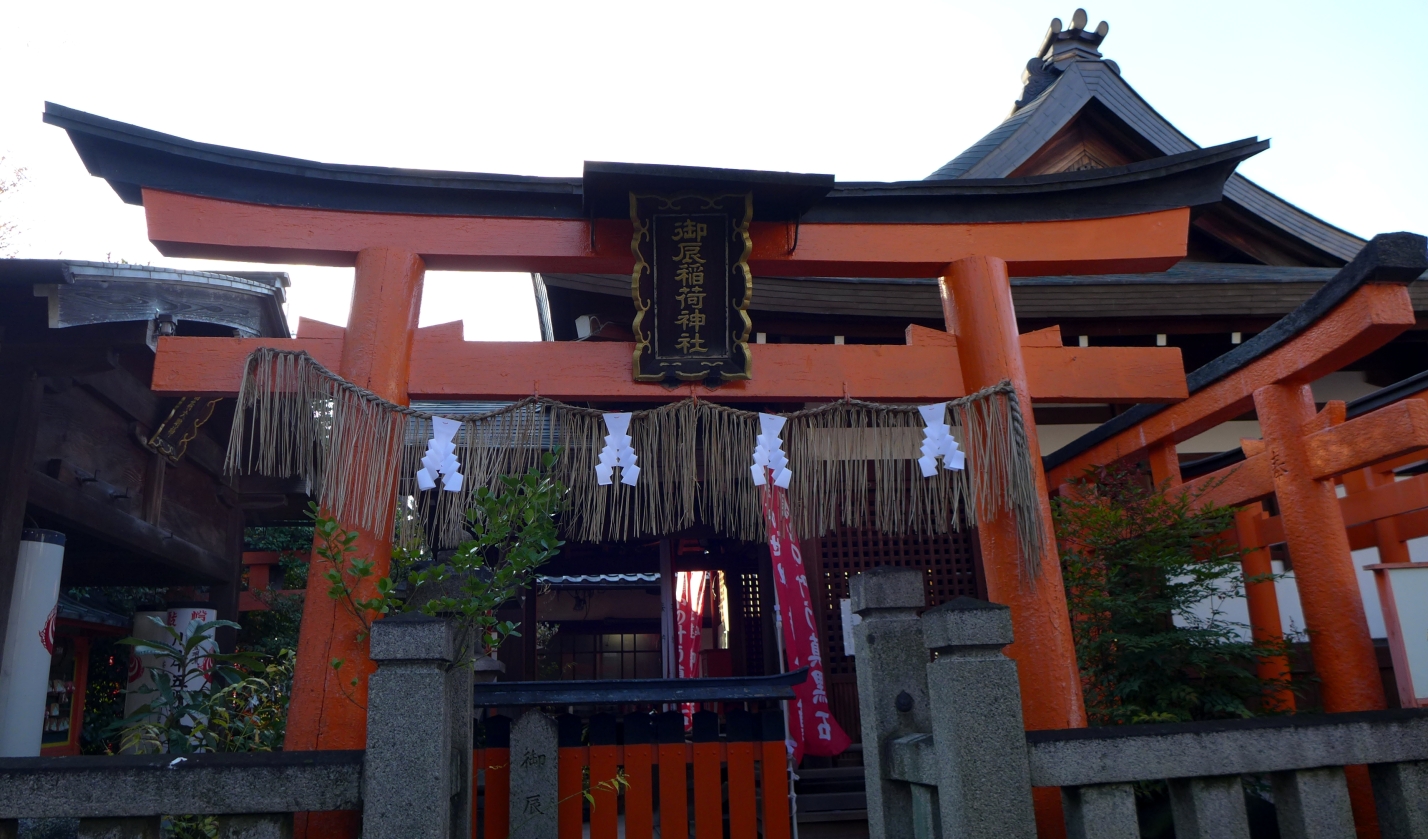 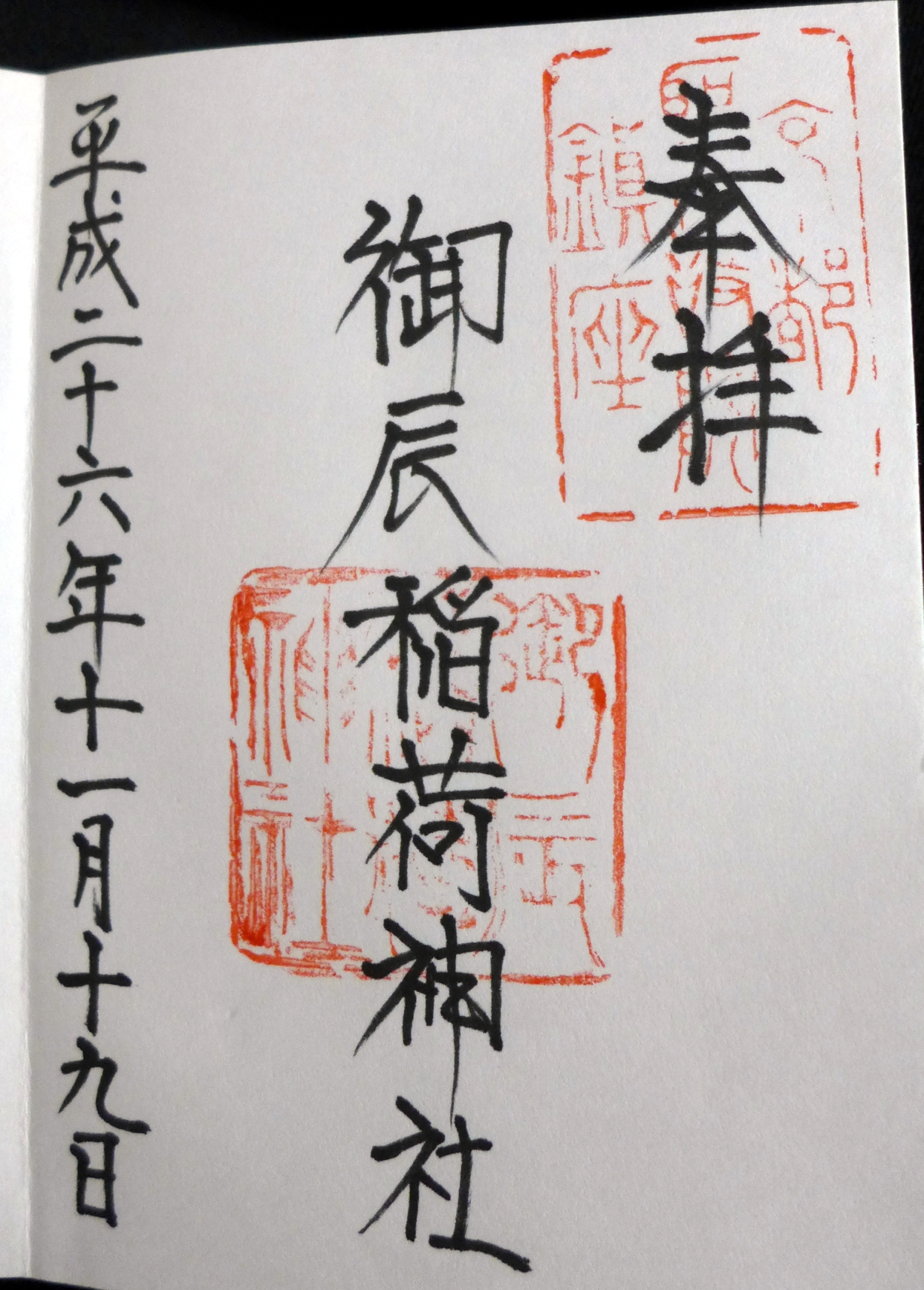 This is a small shop just behind Doshisha University’s Imadegawa campus. I love cheesecake so I was happy to find that we have a shop so close. The cheesecake was absolutely delicious and the shop itself feels cosy. I would recommend it if you are living in Japan and craving cheesecake. I really like fruit cheesecake so I got a banana slice and a raspberry one, both were superb. Yes, two slices, sometimes you just can’t decide, and maybe you shouldn’t have to. 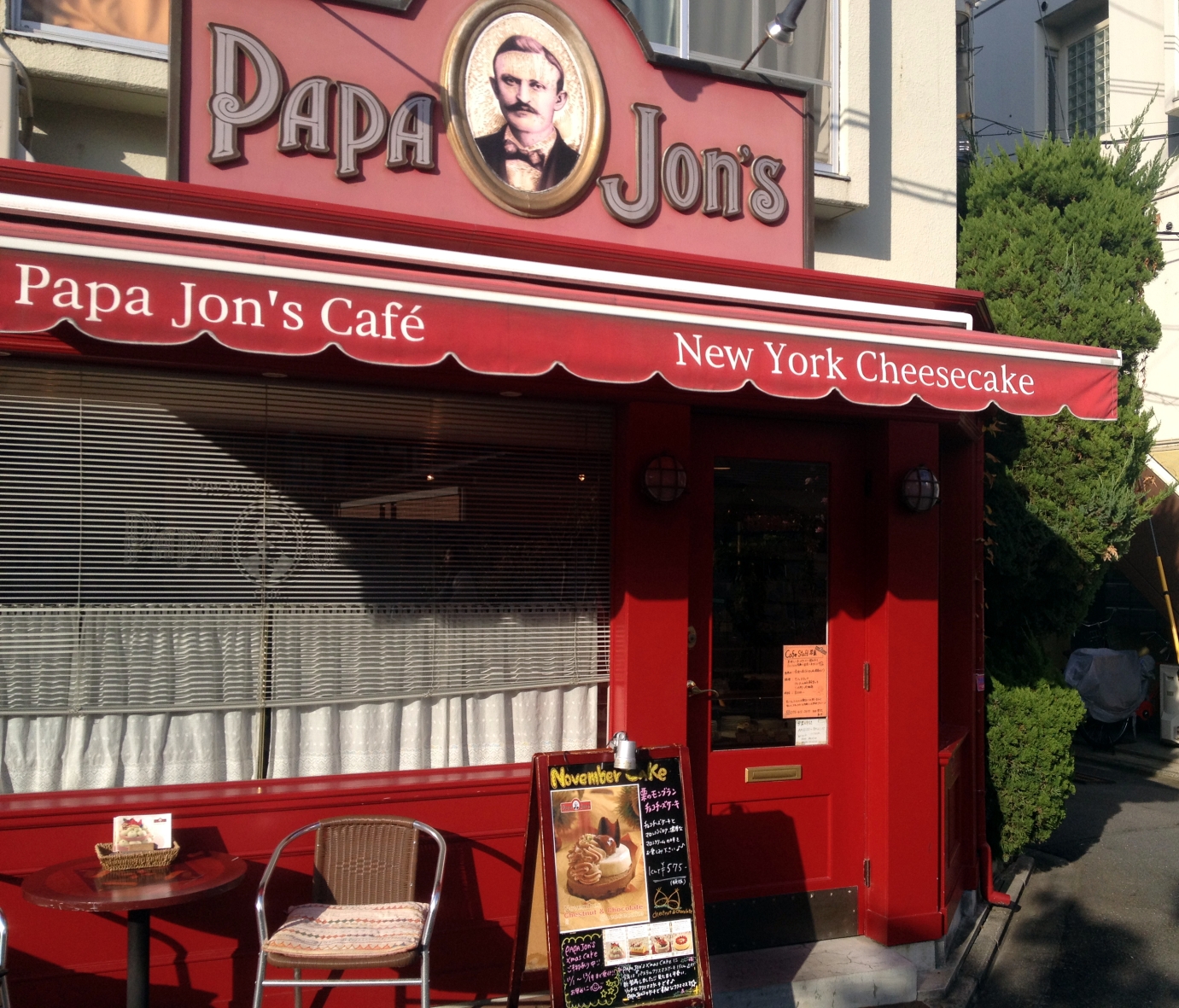 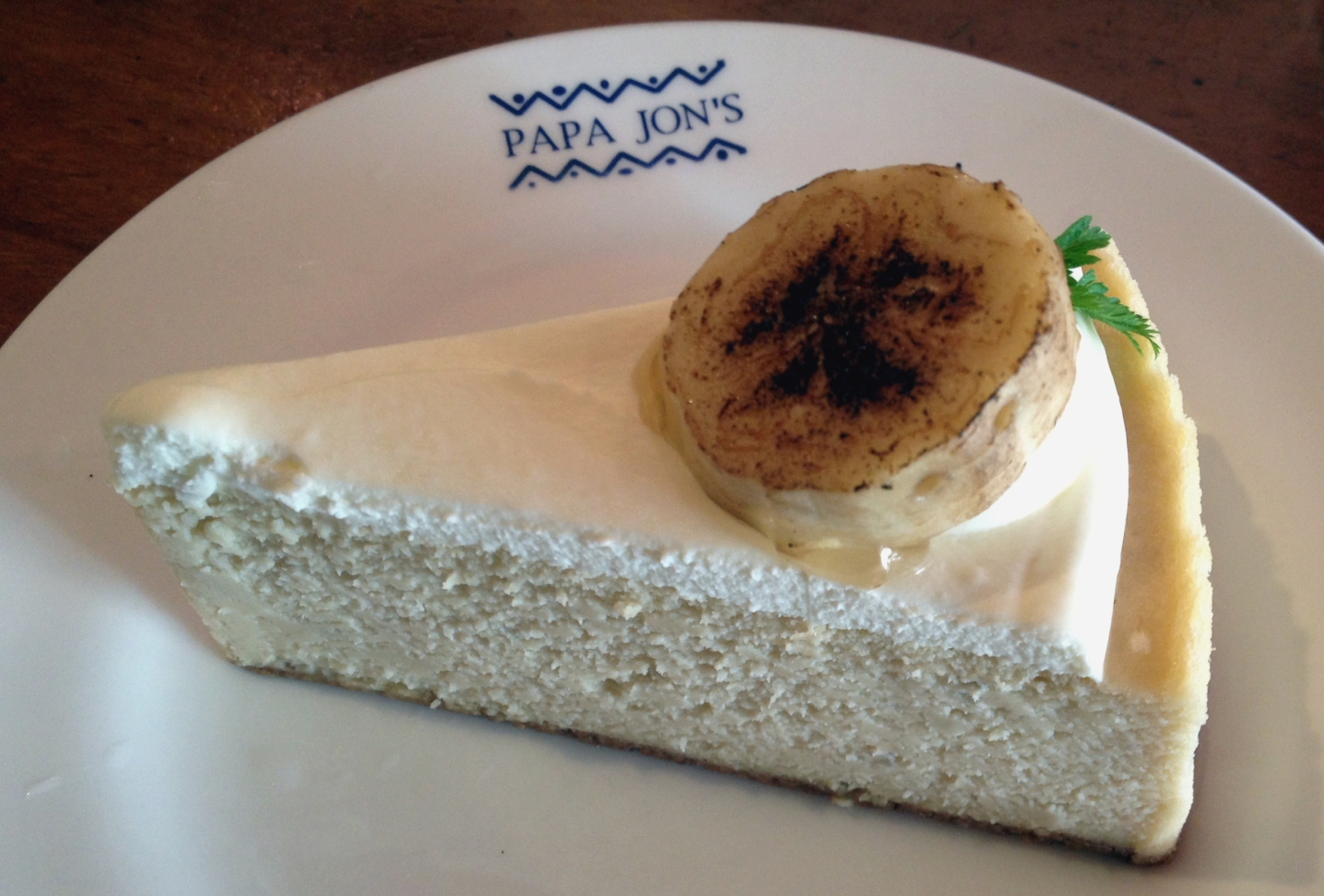 I got some really nice crepes at this place in Sanjo Teramachi doori. They also have this creperie in France so you know its going to be good, though it is a little pricey for students (around 1500円, £8, for most of the dishes).  My crepes were scrambled egg, ham and some onion mustard. They were really tasty. I would definitely recommend this place if you feel like some non-Japanese food for a change.

Japan really likes Christmas, or at least Christmas decorations. My university gave us 3 days off for ‘Doshisha Eve’, the university’s cultural fair where clubs create stalls and they get acts to perform to the students. I dropped by briefly but I was mostly doing other sightseeing stuff (like Kobe, or Kiyomizudera). The Christmas tree they’ve installed is pretty impressive and almost makes up for them making us go to class on both Christmas eve and Boxing day. Almost. 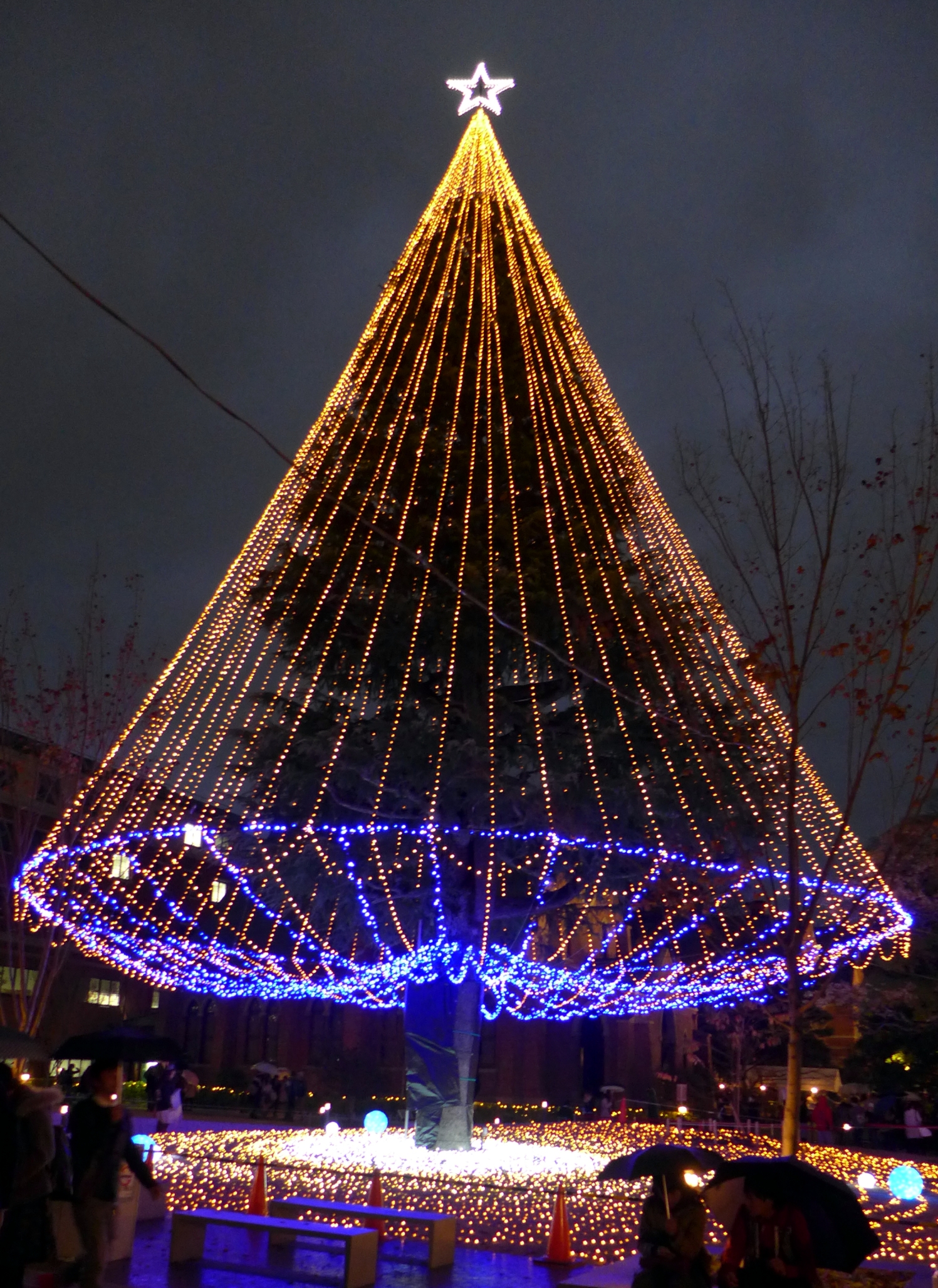 I have recently got a job at Tadg’s Gastropub, which serves hard-to-find foods such as decent fish and chips and chicken pot pie. They also do craft beer and ale, so it’s basically a perfect job for me. Last week we had a wedding party book up the pub and at the end they left us some of the flowers to say thank you. I got to take some home, they’re still alive even a week later! I hope the couple have a long and happy marriage. 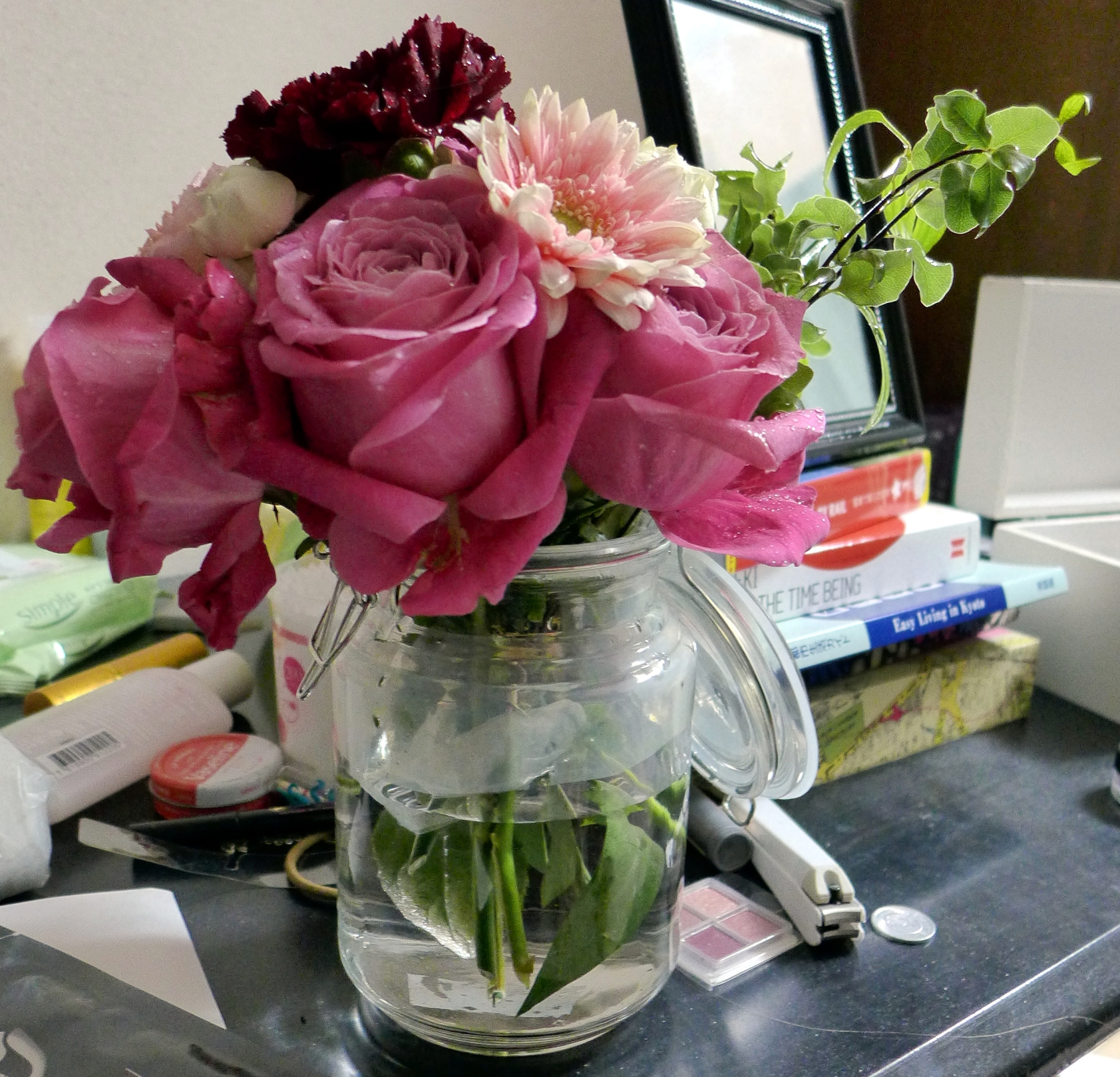 I hope you all had a lovely November and have sufficient jumpers to get you through the colder months coming up! Next month we’ll look at Christmas and New year in Japan, and if I’m lucky, maybe it’ll even snow!

Visiting places in Kyoto usually involves lots to see and do at just one location and as a result I can usually dedicate a whole blog post to one subject, but if I only published posts on each big topic I would inevitably miss out photos and moments that aren’t worthy of a whole post by themselves. This post is for those pictures that would otherwise never get published despite being interesting. I will probably create a post like this for each month so this one will be for October.

While I will probably revisit Pontocho as it is a very interesting area, I would like to at least introduce it a little now. Those who have read ‘Geisha‘ by Liza Dalby will recognise the name at least. Pontocho is one of the areas of Kyoto where it is possible to see Geisha. Geisha are women that entertain businessmen through conversation, dance and music. The word ‘geisha’ (芸者) literally means ‘artist’. Contrary to outside perception Geisha are not normally prostitutes, instead they are considered entertainers and most do not sleep with clients. Their kimono are beautiful and cost  thousands of pounds and they can be seen travelling between appointments in both Pontocho and nearby Gion (just across the river from Pontocho). While it feels a bit awkward to take pictures of people who are clearly travelling between jobs I did take a few when we came across geisha waiting to meet a client.

Pontocho itself is worth a visit simply for the huge variety of restaurants and the beauty of the street itself – it is a narrow pedestrian street lined with restaurants on either side, each displaying a lantern. In the summer the restaurants on the river side of the street have seating on porches over the river. Most of the restaurants are reasonably priced and many have menus in English. A few have amusing displays like the miniature food pictured below. I’m not entirely sure where I took the second picture but I have a feeling it was somewhere near Pontocho. No, I have no idea what’s going on either.

The Kamo river is something I have already talked about before but it is ever-changing with the time of day and season and it’s always beautiful. There is a huge variety of wildlife on the Kamogawa, especially birds – I’ve seen herons, egrets, mallards and kites alongside many other unfamiliar birds. There are also giant salamanders upstream – I hope to see one before I leave! If you want to see how huge they get check out this article – this salamander had to have a policeman keeping an eye on it so the public weren’t scared. 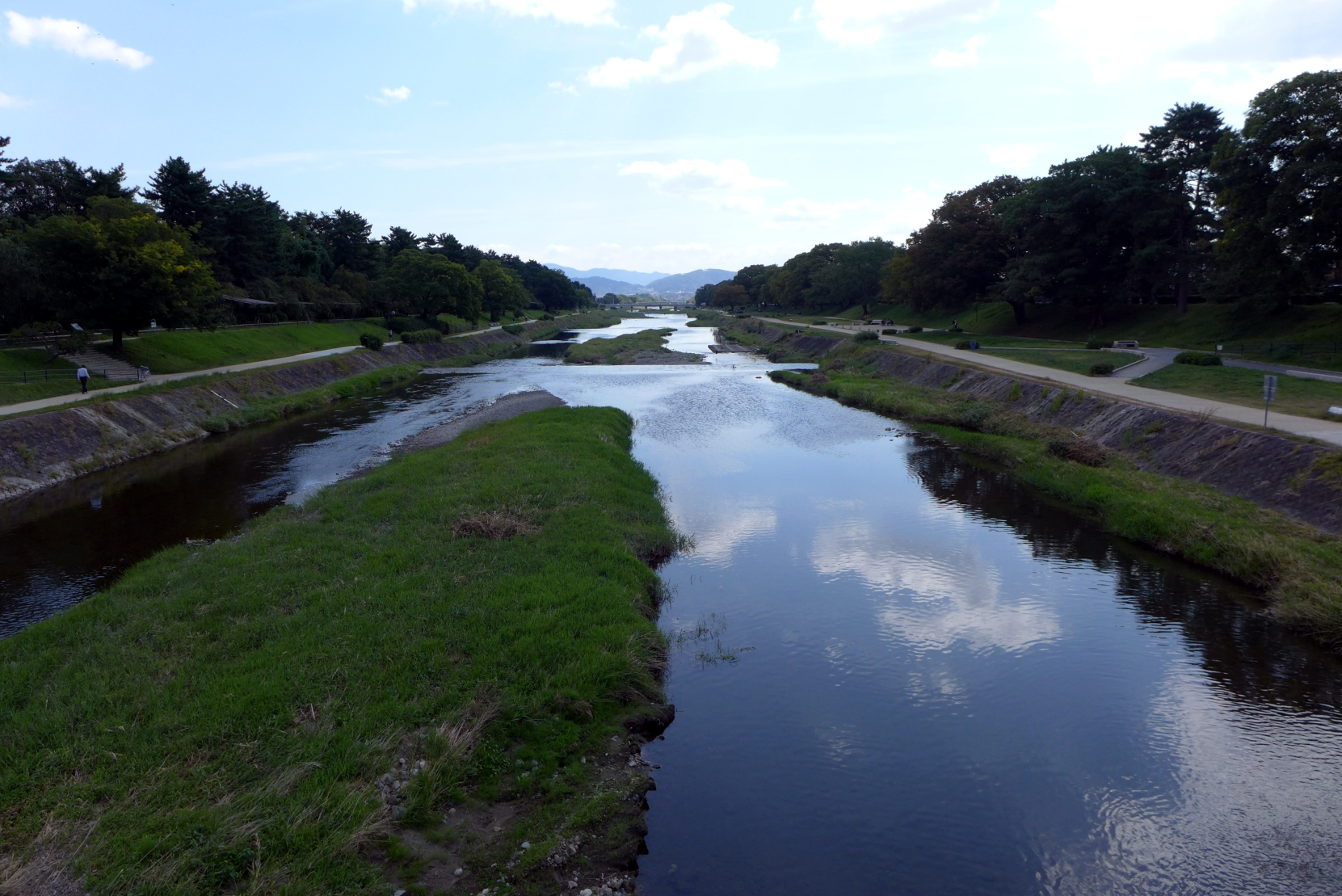 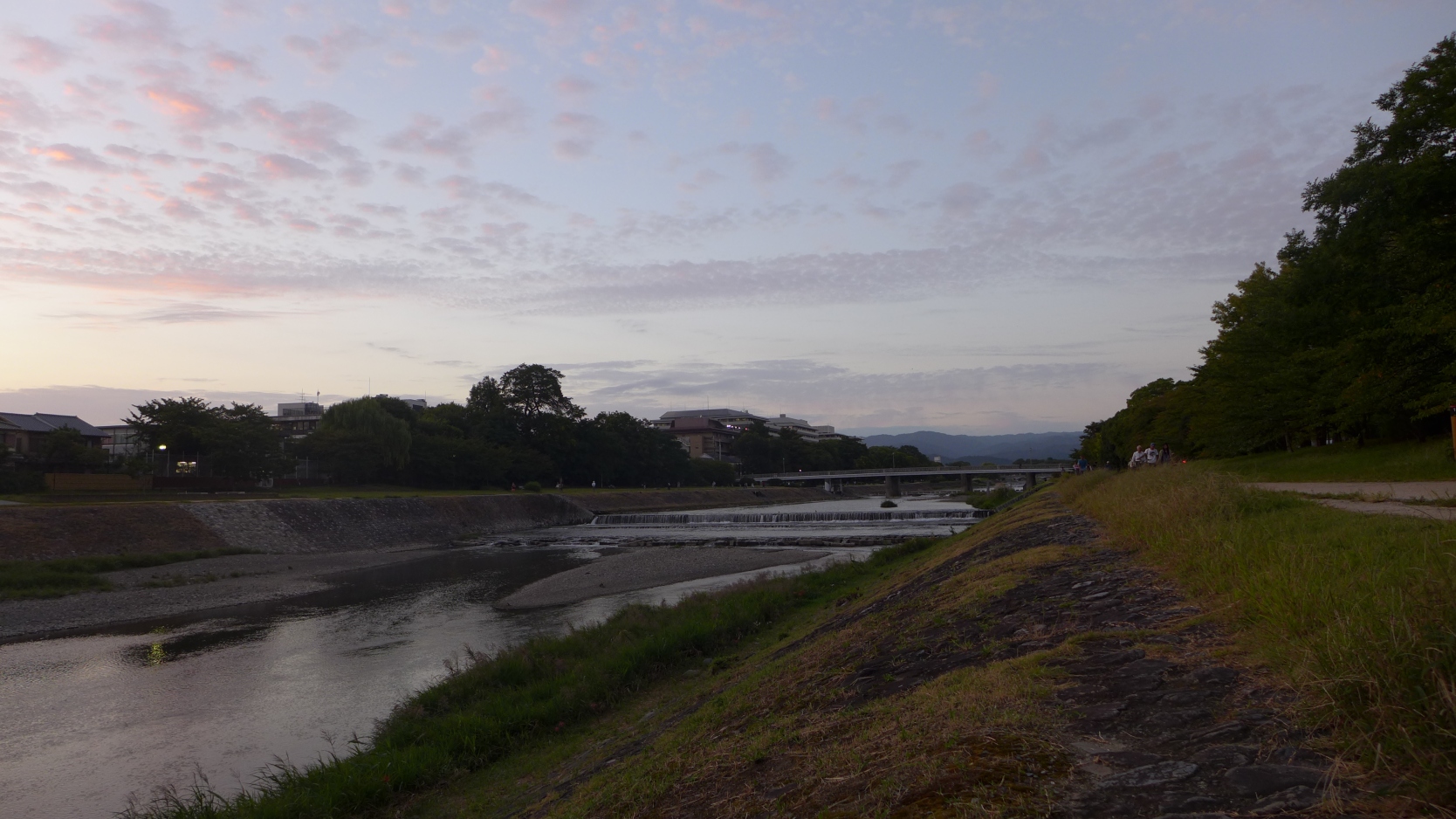 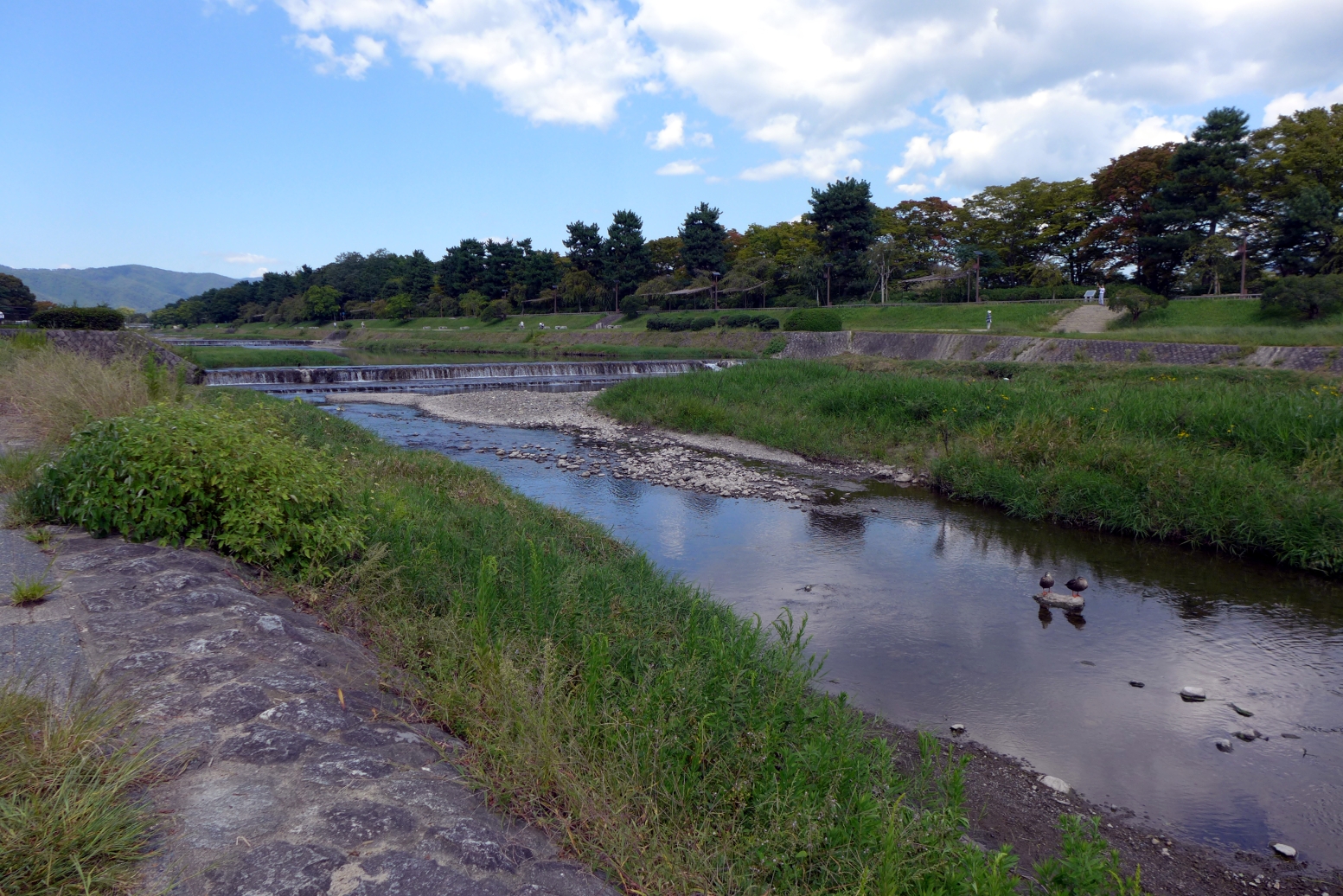 Anyone who  has visited Kyoto has at least seen Kyoto tower – it’s slap-bang in front of Kyoto Station. Though I’ve been twice, both times were at night and so I didn’t get to see quite as far as it is possible to in the daytime, however, looking at all the lights in Kyoto sprawling out around you gives a real sense of how big Kyoto actually is. Kyoto has a tendency to feel more like a town than a city if you live outside the centre and seeing that it stretches all the way from the mountains in the West to the East is spectacular. If you do go up at night try to spot To-ji (東寺) pagoda which is lit up at night. Tickets for adults cost 770円 and it’s definitely worth a visit. 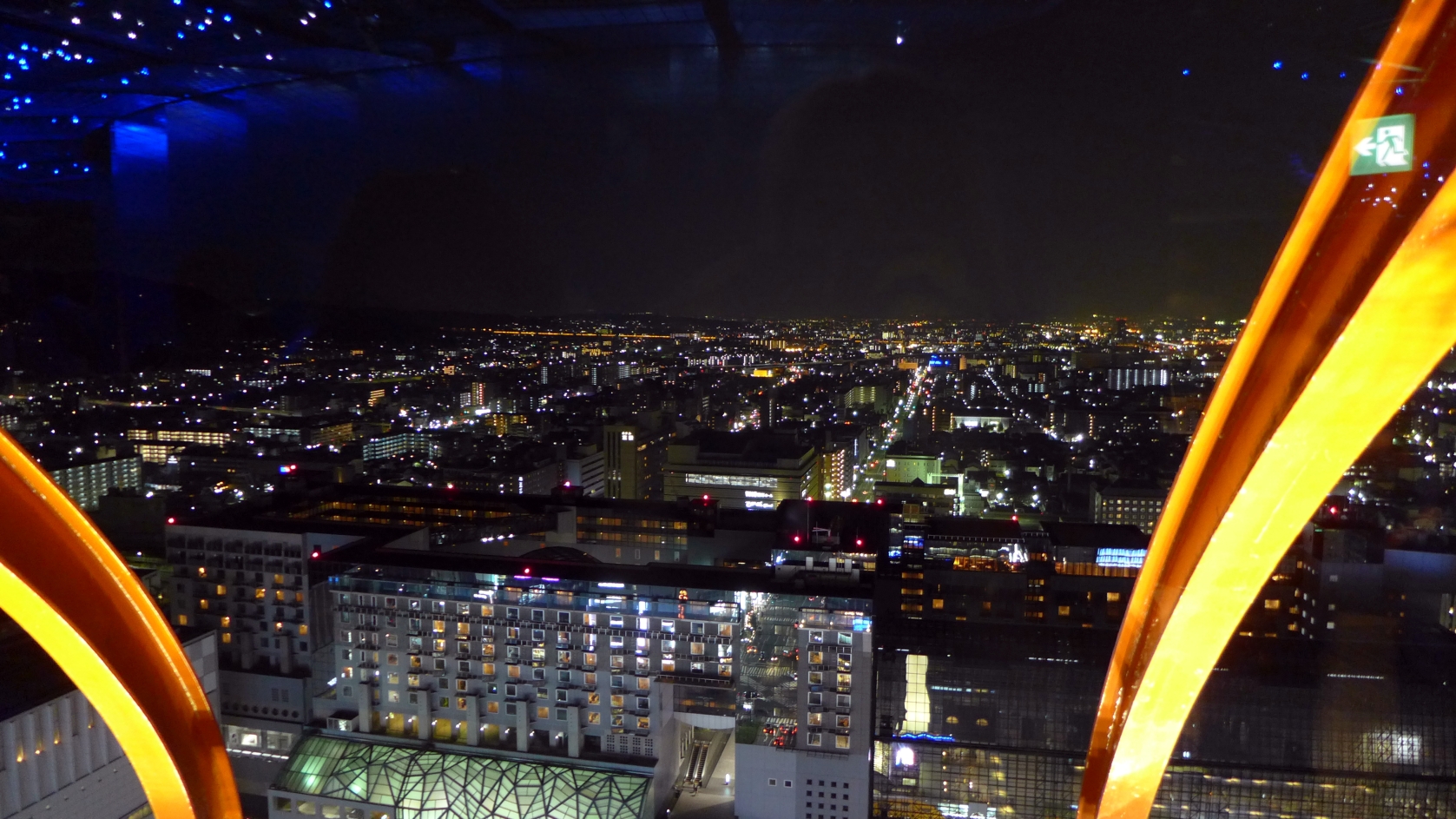 While I will definitely be going back to Arashiyama in daylight, I would like to share some of the pictures I took at night. Arashiyama is to the West of Kyoto and is home to loads of temples, a bamboo forest and a monkey park – you can easily spend the whole day there (and I intend to). When we arrived (I went with my parents) it was just starting to get dark and though I wouldn’t really recommend going at night as everything shuts and you can’t really see, it was lovely to watch the sun set over the Ōi River (大堰川), a river much larger than the Kamogawa. 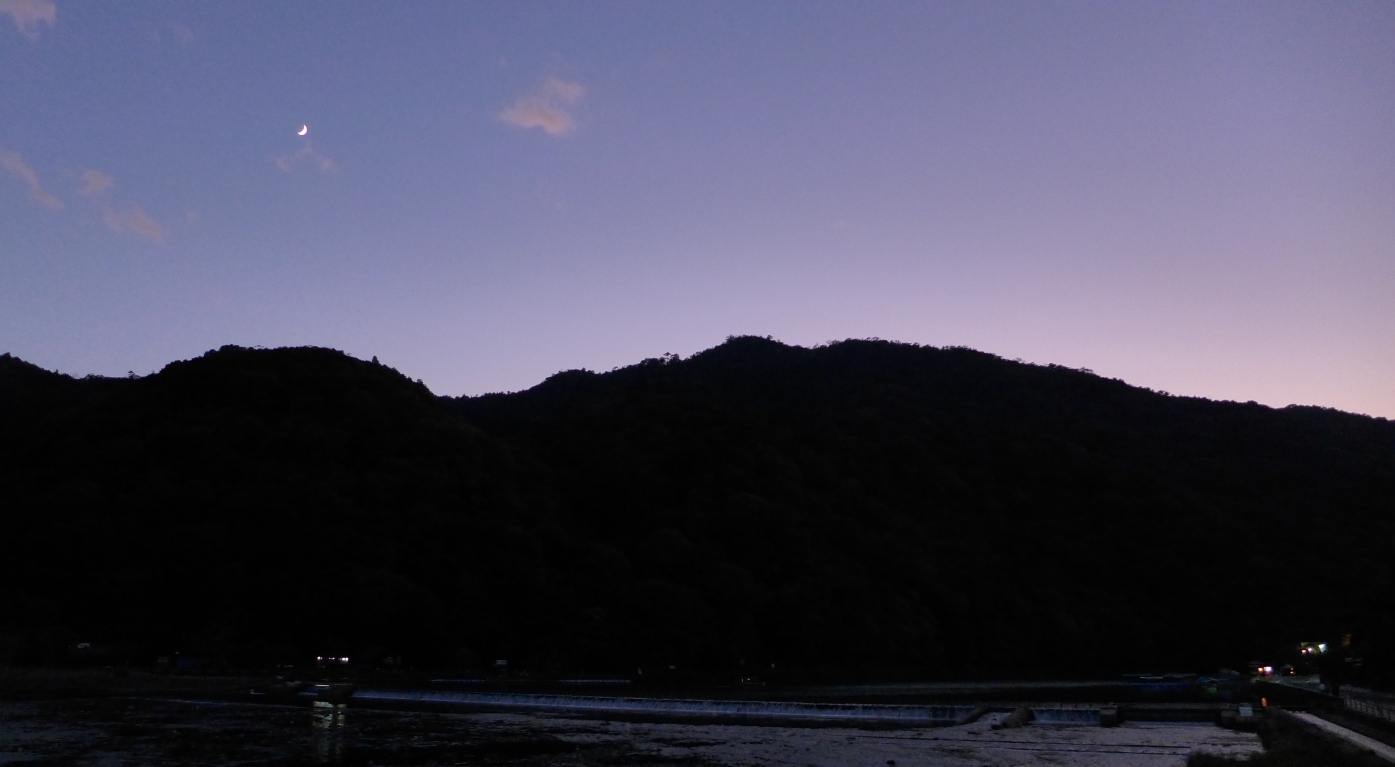 Koryu-ji is a temple in West Kyoto that probably doesn’t get many visitors owing to the fact that it’s completely out-of-the-way of everything else (though it is on the way to Arashiyama if you’re willing to get off the train). The main attraction of Koryu-ji is the impressive collection of buddhist statues it has on display in one of the halls. The exhibition costs around 500円 and consists of one room, but there are a lot of statues with some dating back to the 11th century. Worth a visit if you enjoy Buddhist art and historical artifacts. The temple grounds are large and it has a beautiful mossy forest garden. Perhaps not worth the journey for some but it was enjoyable nonetheless. 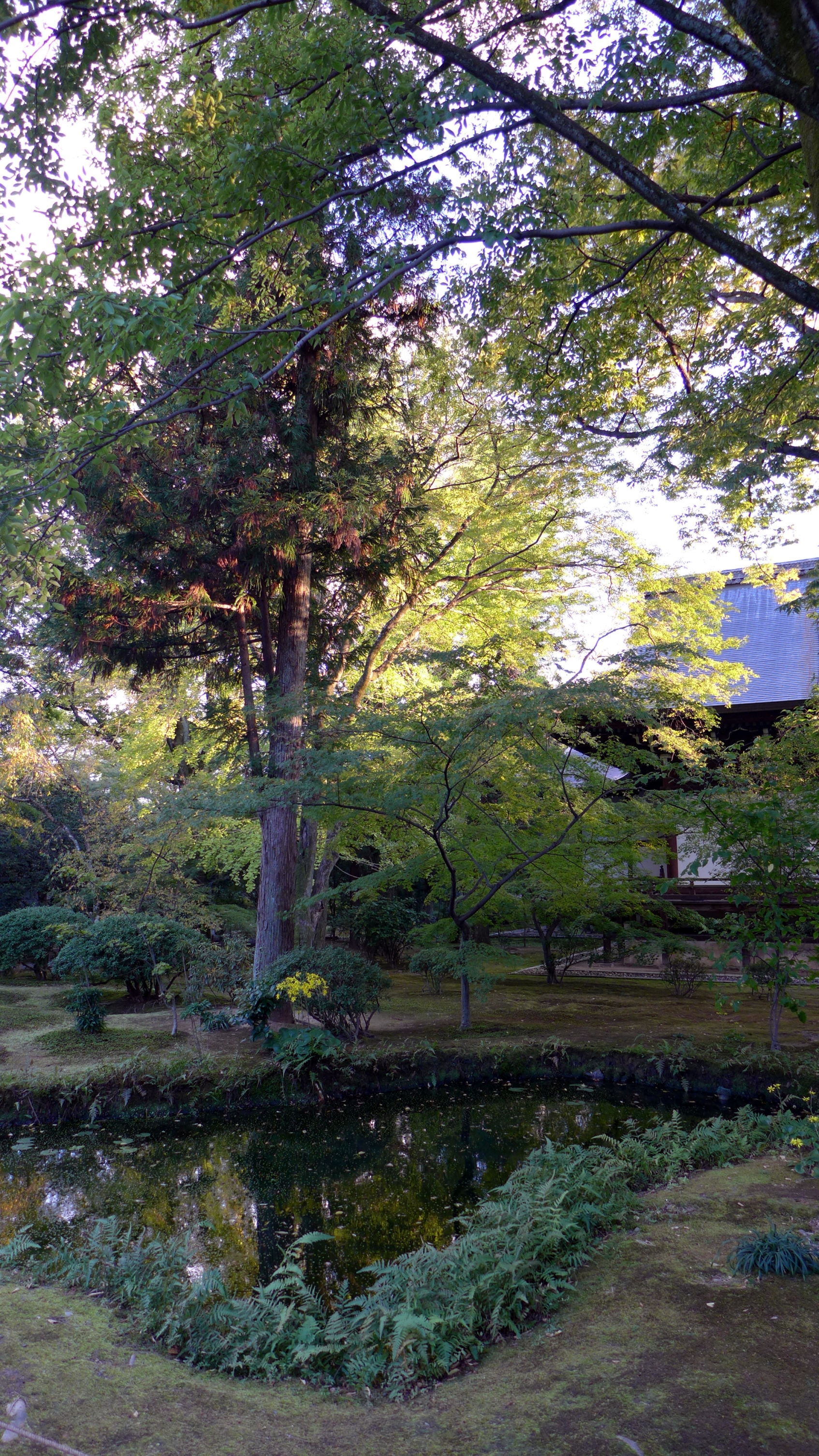 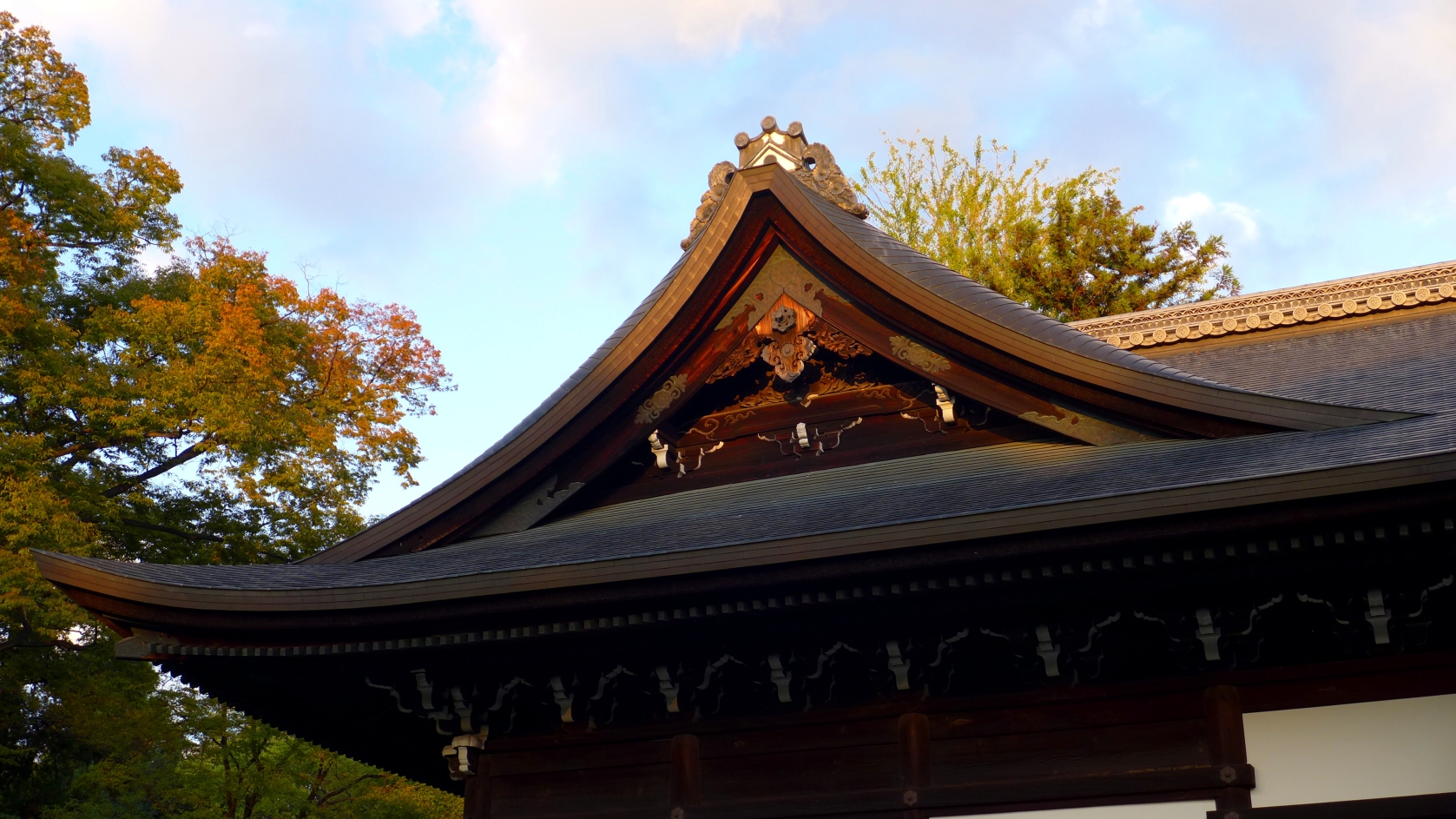