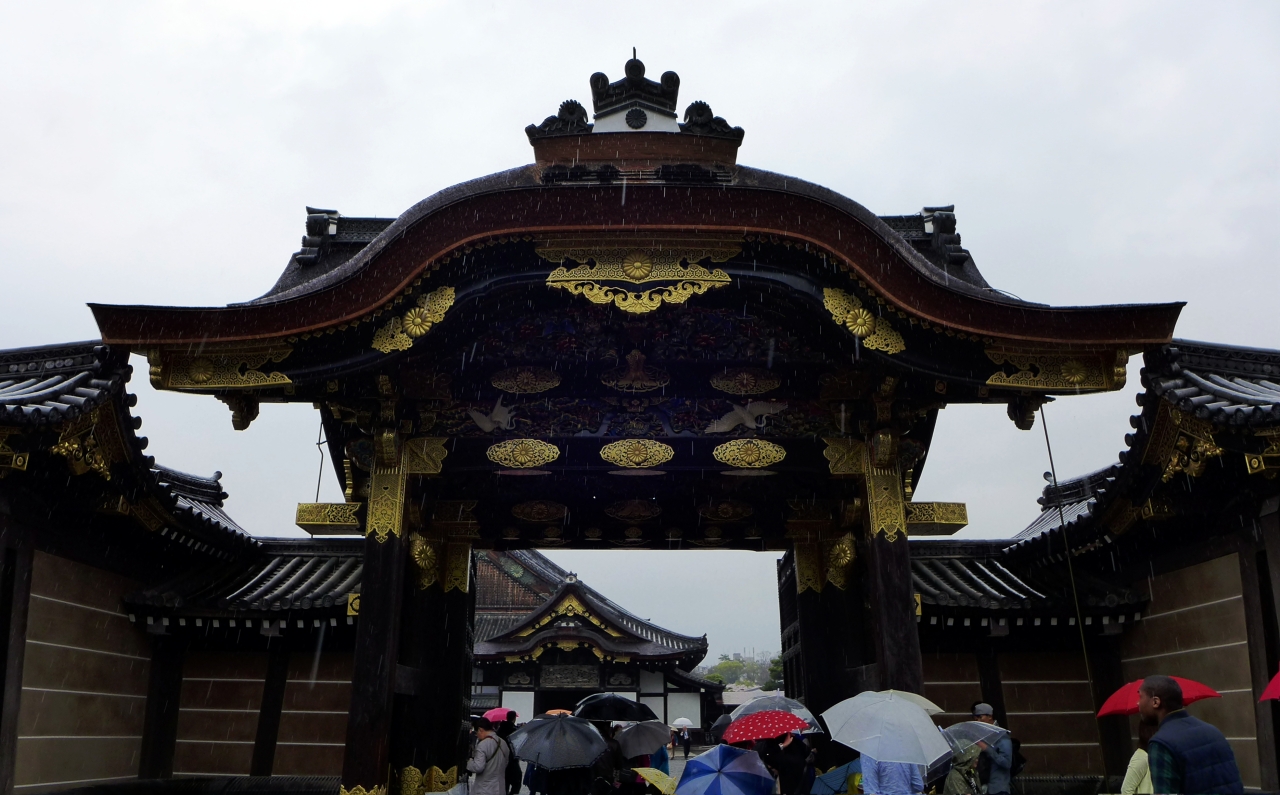 The weather while my parents were visiting me was rather miserable; there was a lot of rain and it was pretty cold. While I would expect this of a British April, this is completely unusual for Kyoto and I have heard countless complaints from locals that this is the coldest and wettest April they’ve ever seen. As such going out and enjoying the cherry blossom in the sunshine was not possible on some days. We tried to find alternative activities even though Kyoto sightseeing is quite an outdoor affair.

We decided to go to Nijo-jo, or Nijo Castle, Kyoto’s local castle and World Heritage Site. As it has inside portions we thought it would be better than temples. The weather that day was horrendous with torrential hard rain that soaked through my coat. I was not allowed to take photos inside the castle so most of these photos will be of the very wet gardens. 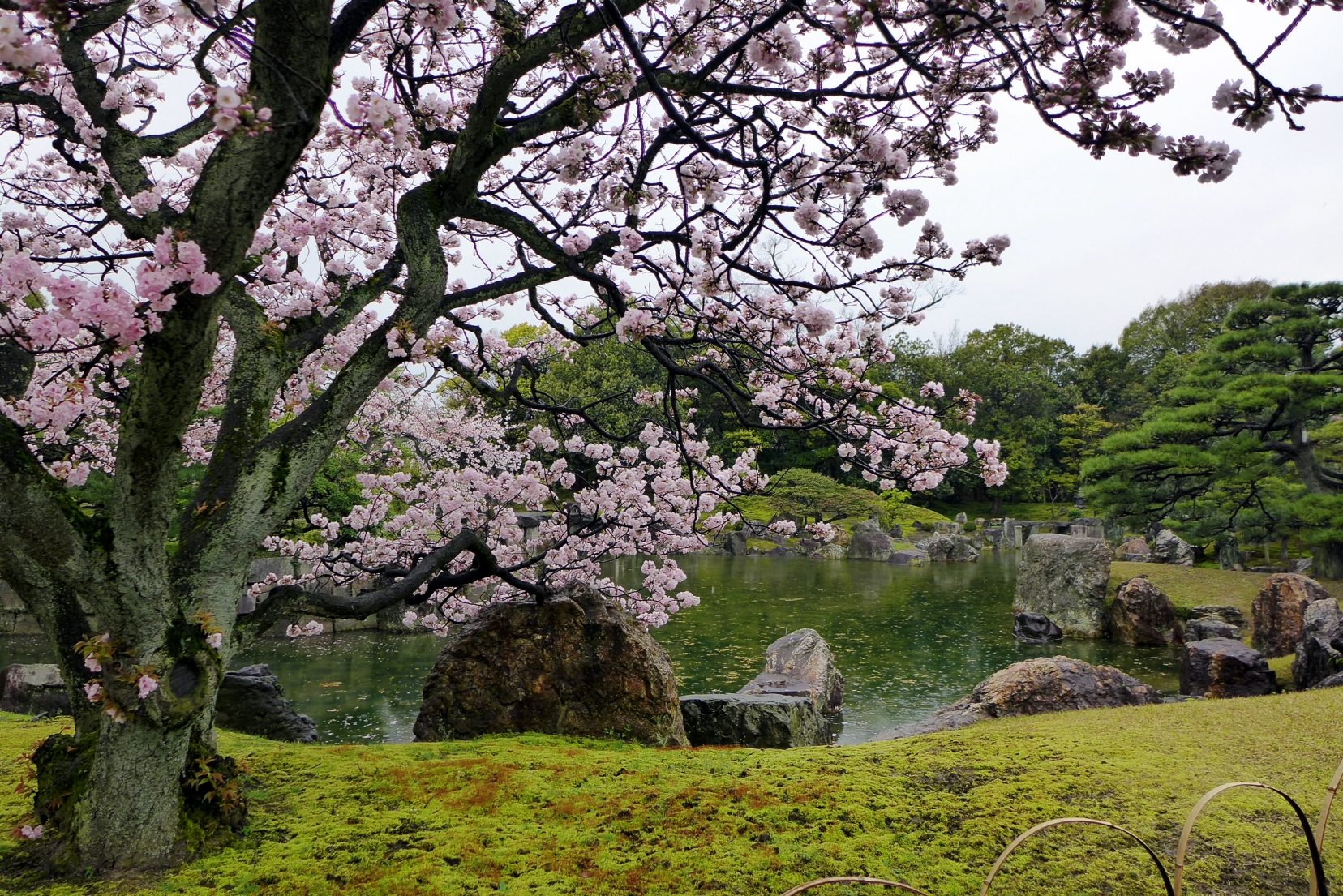 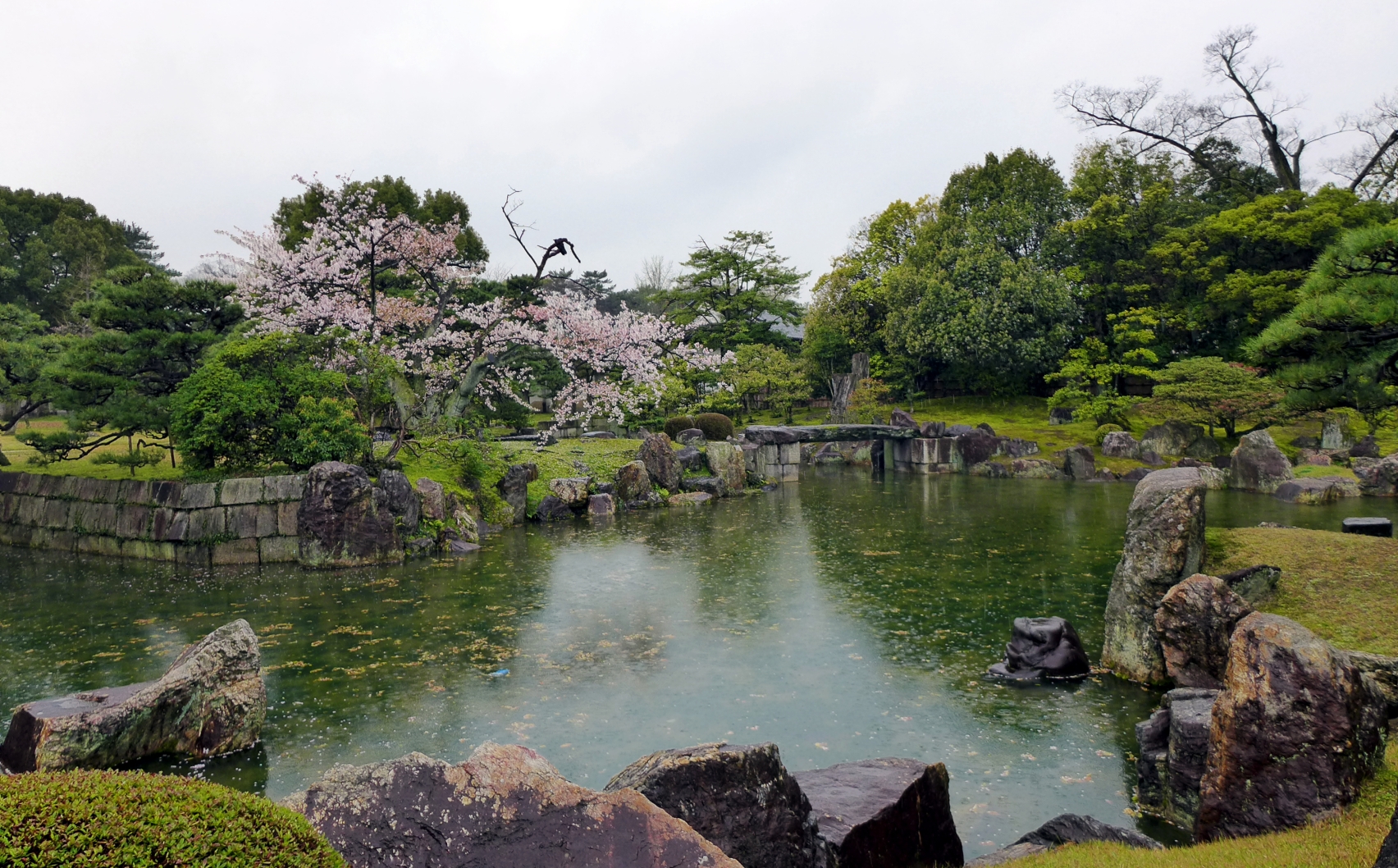 Nijo castle was founded by Tokugawa Ieyasu, the founder of the Tokugawa shogunate that lasted 250 years. I was going to explain to you how he came to power, but it is rather complicated and involves many battles, tactical retreats and alliances. I will therefore point you towards his Wikipedia page for a summary of his battles and instead sum up his victory with the Japanese saying about the 3 ‘great unifiers of Japan’. They are known as the ‘great unifiers’ as Japan had previously been in a state of ‘sengoku jidai‘ or warring states for over a hundred years, these three men, Oda Nobunaga, Toytomi Hideoyosi, and Tokugawa Ieyasu, were the men that enabled Japan to unify as one country. 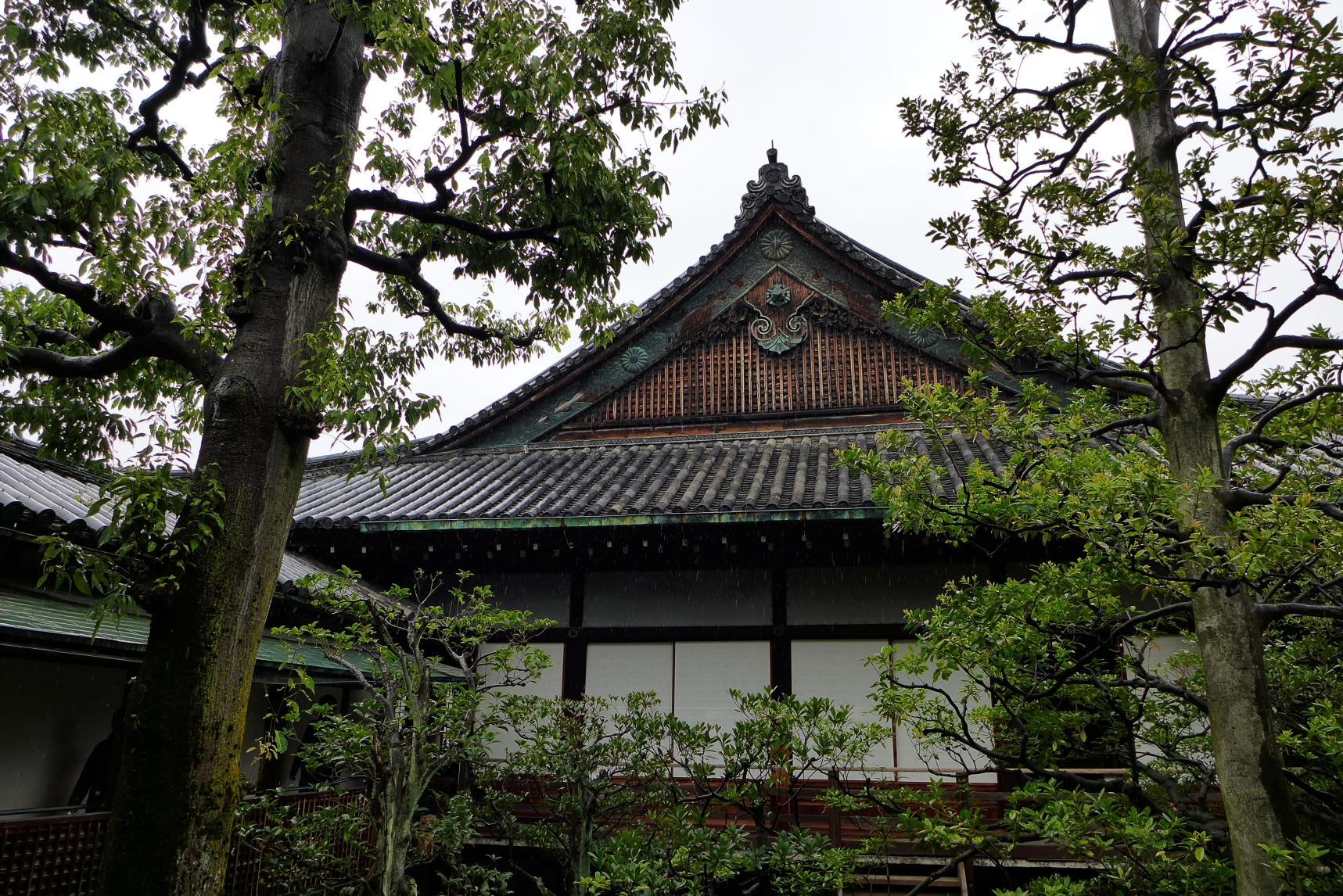 We have encountered this saying before when I was talking about Hideyoshi here, however I will reiterate. The saying goes thus: The three unifiers are sitting around a bird in a cage, trying to persuade it to sing. Nobunaga says “if you do not sing I’ll kill you”, it does not sing. Hideyoshi says “if you do not sing, I will make you sing”, it does not sing. Ieyasu says “If you do not sing, I will wait” and eventually the bird sang. This saying sums up the various approaches to unifying Japan; as you can see Ieyasu is credited for his patience – he was careful and strategic, ensuring that his shogunate had a strong foundation once he gained power. He was also good at making allies and ensured that those that had supported his campaigns in the war were rewarded, creating a loyal base to his regime. He ordered the construction of Nijo-jo and ordered the Daimyo (lords) of West Japan to finance it, establishing a seat of power for the shogun in the imperial capital of Kyoto. 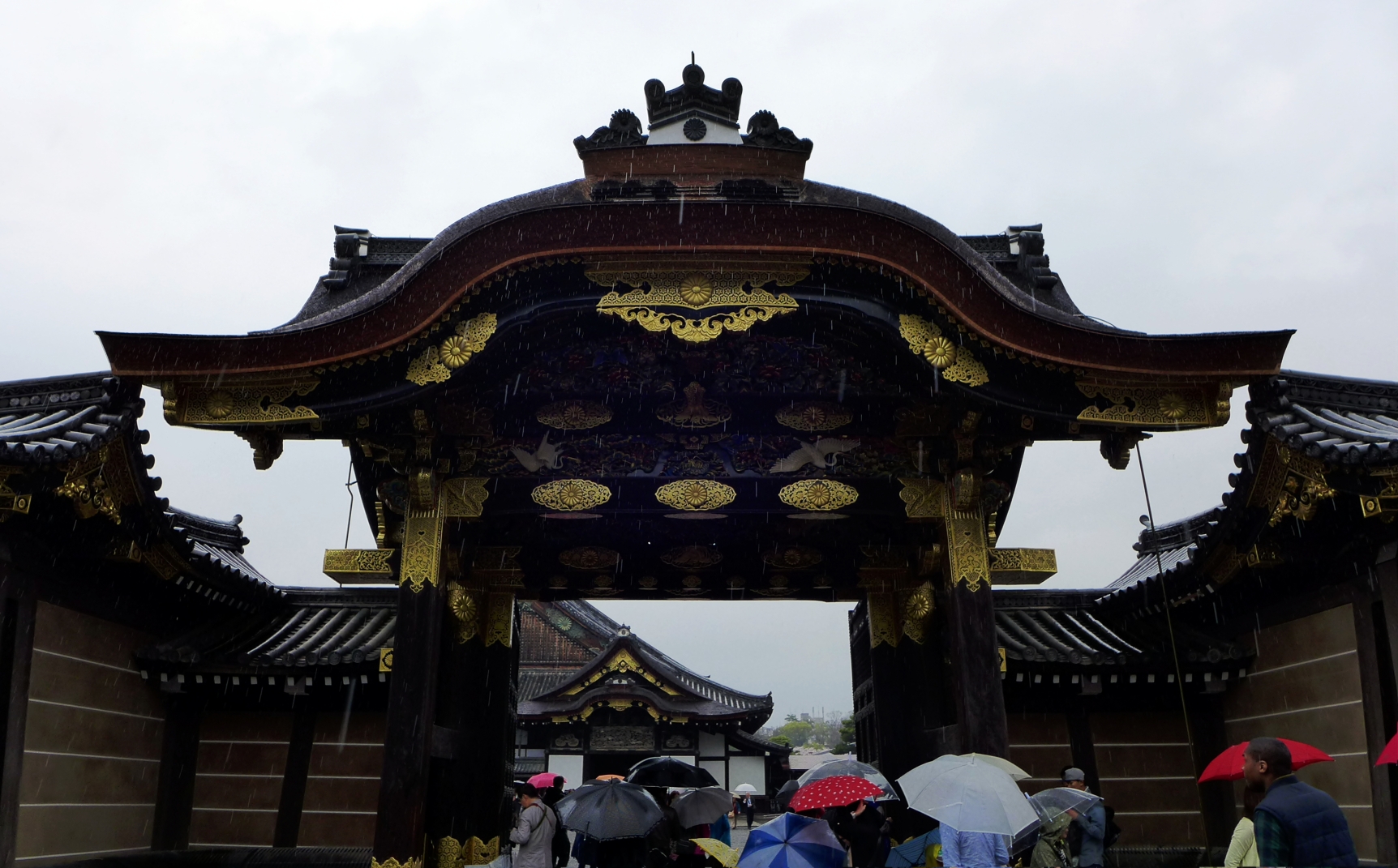 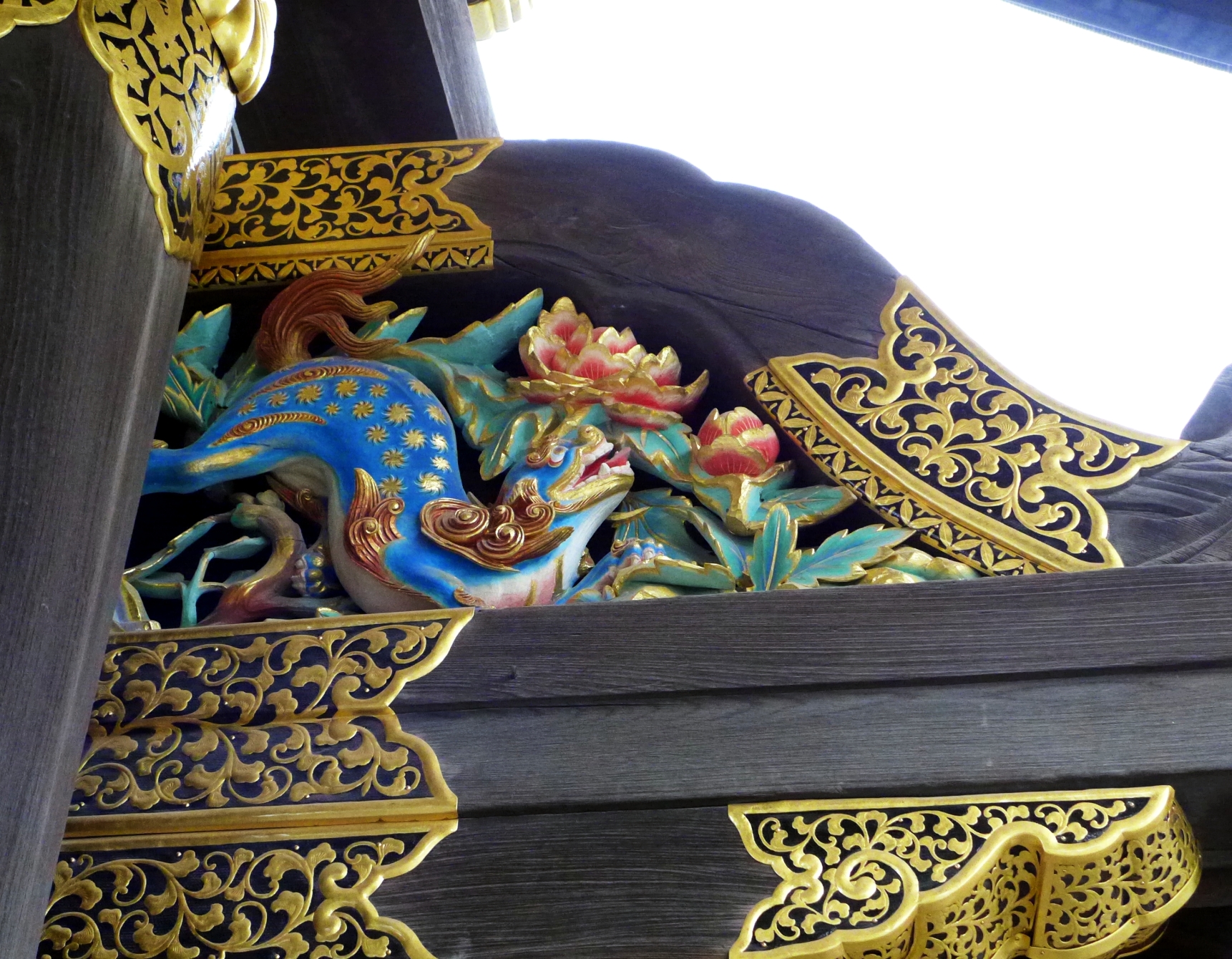 Nijo castle consists of two palaces and two sets of fortifications. The Ninomaru palace sits on the outside of the second moat and wall but within the first and the Honmaru palace, which is actually the relocated Katsura palace, built 1847, is within both walls. The decoration of the palace was intended to impress; the samurai, not well versed in subtle Buddhist or Chinese art, favoured the more lavish and impressive styles, opting for a lot of gold leaf and bold designs. There are many screens made by the Kano school, the dominant art school of Japan at the time, which focussed on Chinese-inspired bold, brightly coloured designs. These lavish designs were intended to impress upon the lords the wealth and importance of the shogunate.

These impressive designs worked with the system of dignitaries from Daimyo visiting the Shogun while he was staying in Nijo-jo (the shogunate was actually based in Edo, modern day Tokyo). The castle has many different audience chambers, meant for different levels of importance; lowly visitors only got to see outer rooms, whereas important officials and old supporters were welcomed into the inner rooms. The audience rooms were set up so that one third of the room was raised a step above the rest, this was where the shogun would sit, while the lords would sit beneath him in the lowered portion. There were highly visible cupboards with tassles on the handles to one side, which weren’t actually cupboards at all, but where the Shogun’s bodyguards would sit; whereas in most castles these would be hidden, the Tokugawa decided to make them more visible as an intimidation tactic. 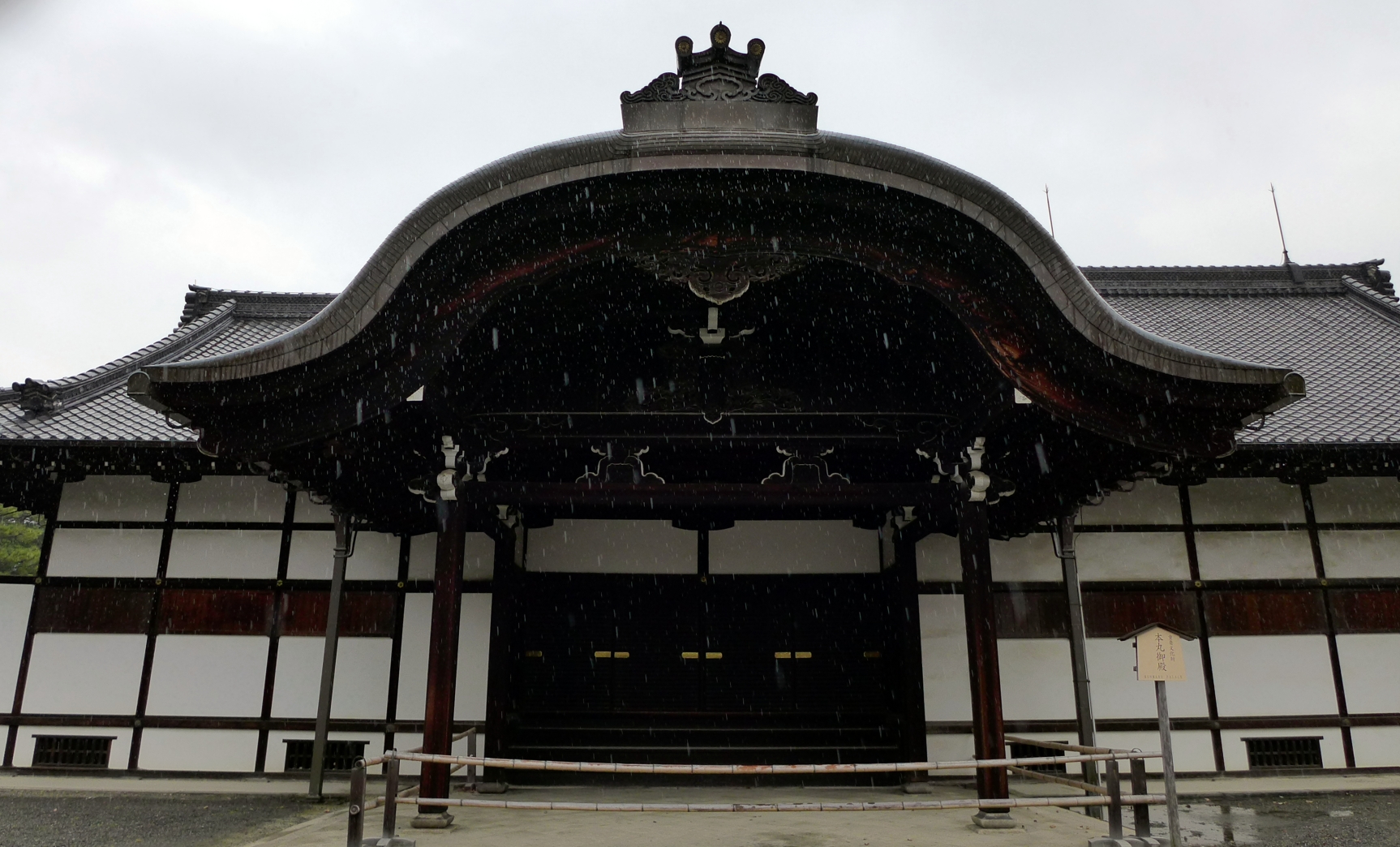 In case all this intimidation and ceremony went awry and someone decided to sneak in to kill the Shogun, Nijo-jo is equipped with Nightingale Floors, 鴬張り uguisubari. These are special floors that make a squeaking noise when stepped on, like an old trampoline. They are made by having the nails supporting the floor rub against each other or some other metal, giving the squeaking noise. These were named after the Japanese bush warbler, a noisy bird you can hear during springtime in Japan. These floors were intended to prevent anyone sneaking around the palace and assassinating the occupants. 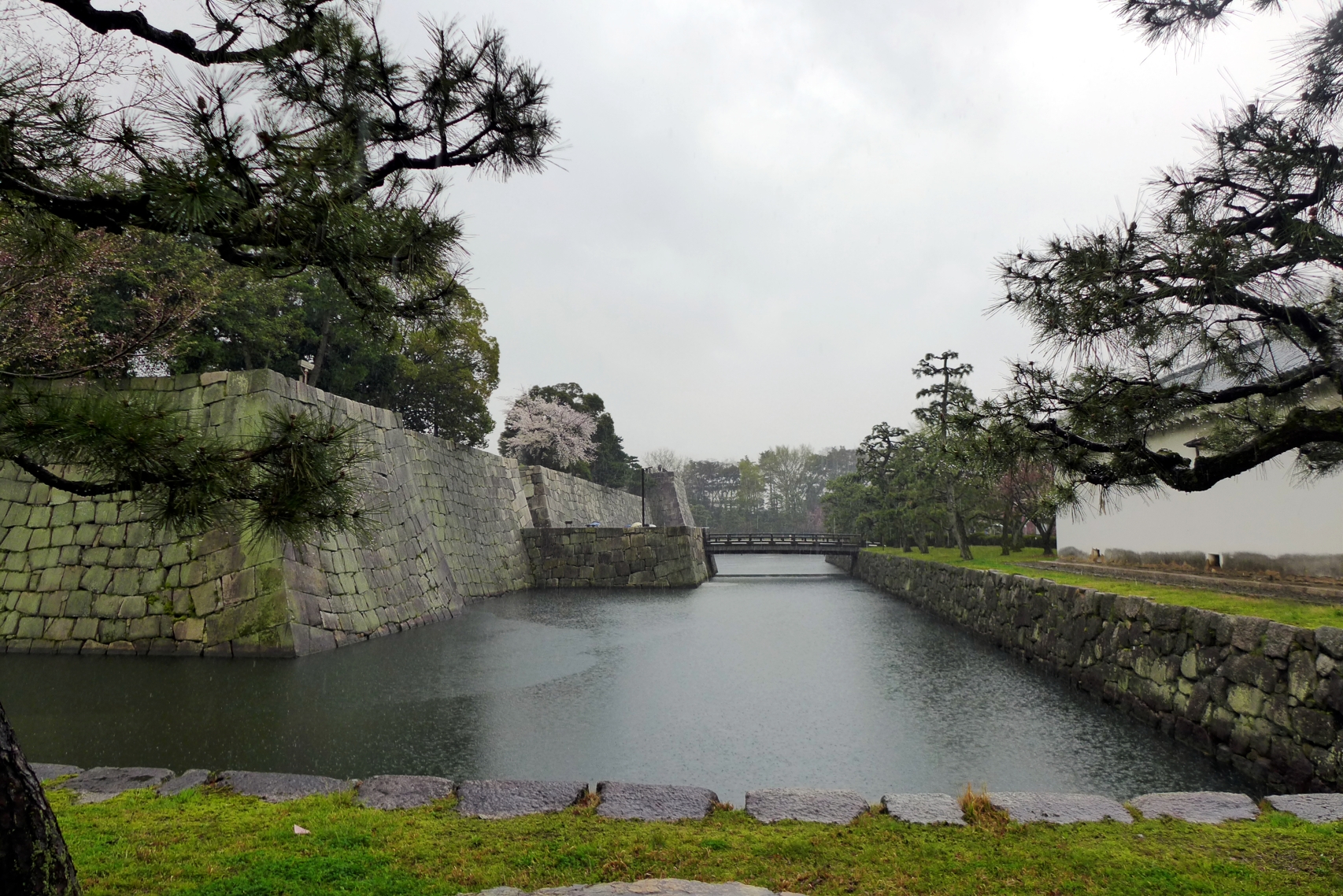 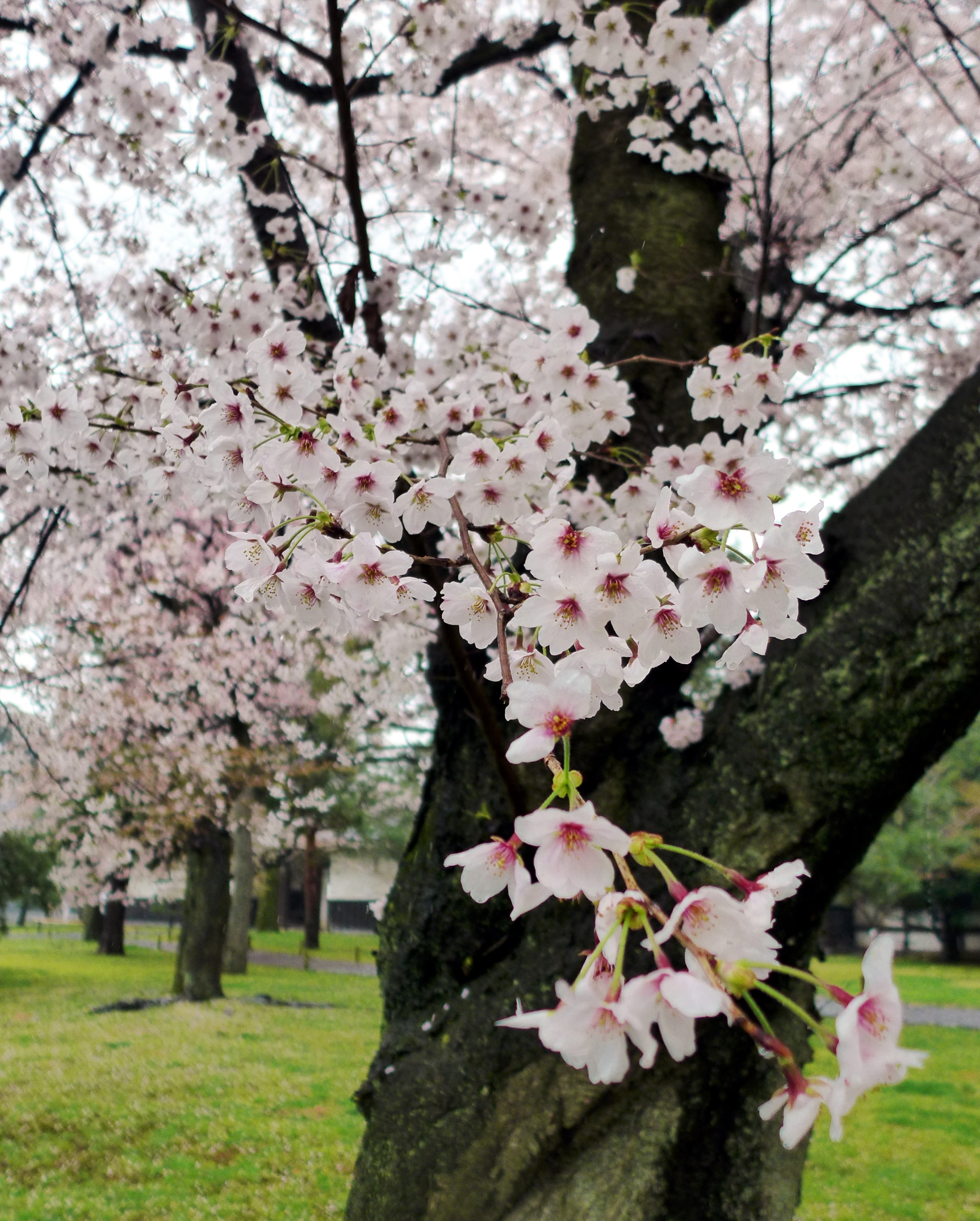 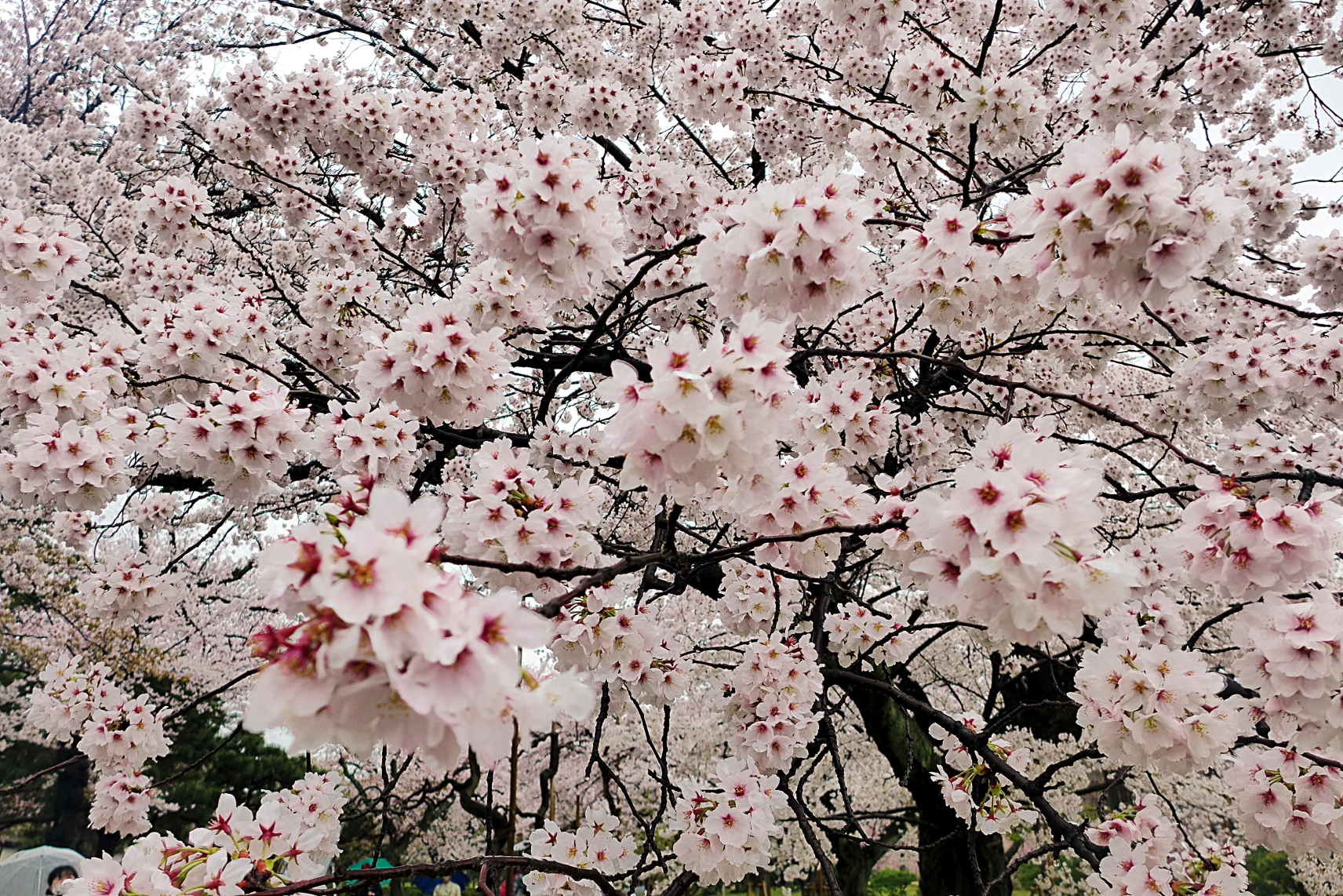 The palace is surrounded by several beautiful gardens of various styles; the Honmaru has traditional ‘circuit’ gardens of the Tokugawa period while the Ninomaru has a half-western-half-Japanese style garden that was built in the 1960s to receive official guests to Kyoto from overseas. It has traditional Japanese rock gardens but also lawns, a concept not native to Japanese gardening. Sadly the gardens were rather wet when we visited and I was distracted from enjoying them by the rain soaking through my clothes. 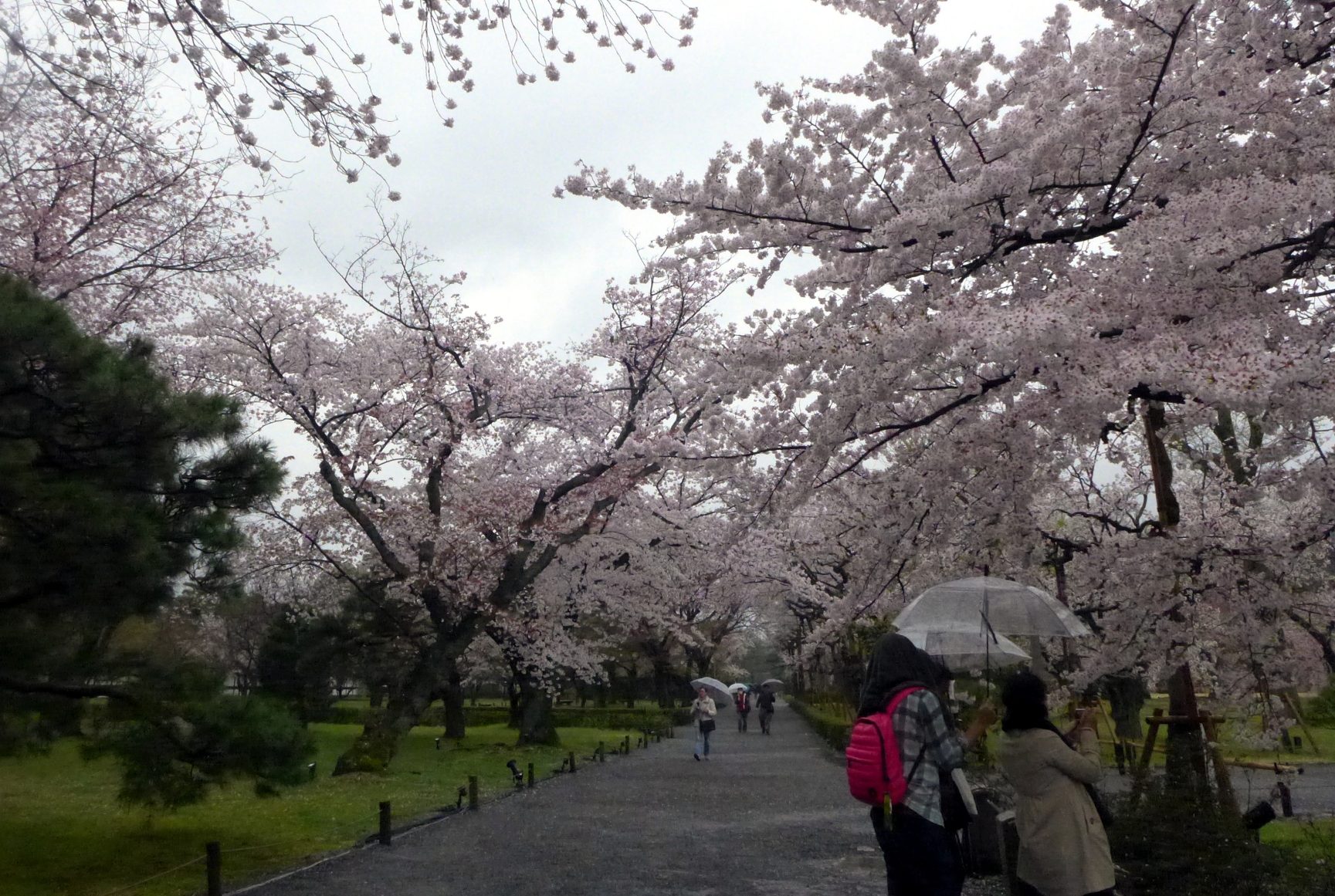 Nijo castle is definitely worth visiting on your trip to Kyoto. The main gate is under construction and not due to be finished until 2018, so bear that in mind. It is a good rainy day activity but if you want to enjoy the gardens I’d say it’s best to go when it’s sunny.