I have had quite a busy December in terms of work and socialising and as such I don’t have a great deal of snapshots. Most of what I’ve been up to has slotted neatly into single blog posts. However I do have some tiny temples left over as well as some pictures of the snow for your enjoyment. My third month in Japan was great and I was lucky enough to experience snow in Kyoto twice!

This temple is located in a busy shopping area near Sanjo. The area has many different shops and is also covered, which was great because the snow and ice made it very hard to walk outside. Though the snow looked beautiful, walking around in it was a different story. Walking to university I saw a tragic sight: a man was walking his dog down a very icy street. The street was like a rough ice-rink, I was sliding everywhere and I was worried I might slip into the ditch at the side of the road. The man’s dog was not doing so well, falling over quite a bit, but the man kept pulling the dog onwards. As I carefully navigated my way around them I realised that the dog only had one front leg, making walking on the ice impossible. The poor dog kept getting up and trying its best, as dogs are animals that do not give up. Thankfully soon after the owner crossed to the non-icy side of the road (the sun had melted the ice) and the dog had some respite. Poor dog.  Basically, walking around outside was not a great idea in that weather but I digress.

The temple appeared small from the outside and I thought it would be a simple matter of walking around a small area and getting my stamp done, but actually there was a narrow corridor back to a courtyard where there were some statues and another place to pray. It is dedicated to Yakushi Nyorai, the Buddhist God of healing.

This temple was founded in the 13th Century, with the official name of Eifuku-ji. It got its second name of Takoyakushido a few hundred years later. The temple had been known to the people as Takuyakushido, where ‘taku’ means marsh, denoting the area where it stood. Tako means Octopus, and this is the tale of the octopus temple.

There was a monk studying at the temple named Zenko whose mother was very sick. He tried to nurse her back to health but nothing worked. She told him that she remembered eating octopus in her childhood and said that maybe if she had some she would get better. Zenko, being a Buddhist monk, was not allowed to buy living things to eat, but he was so desperate to save his mother that he took a wooden box to the market and bought octopus. As he carried the box back to the temple people grew suspicious and demanded to know what was inside. Zenko, unable to refuse, prayed to the god of healing for help, and when he opened the box the octopus had transformed into the eight volumes of the Lotus Sutra. People were amazed and praised him and soon after his mother was miraculously cured. Since that incident the temple was known as the Octopus temple, with the ‘taku’ in its name turning into ‘tako’. 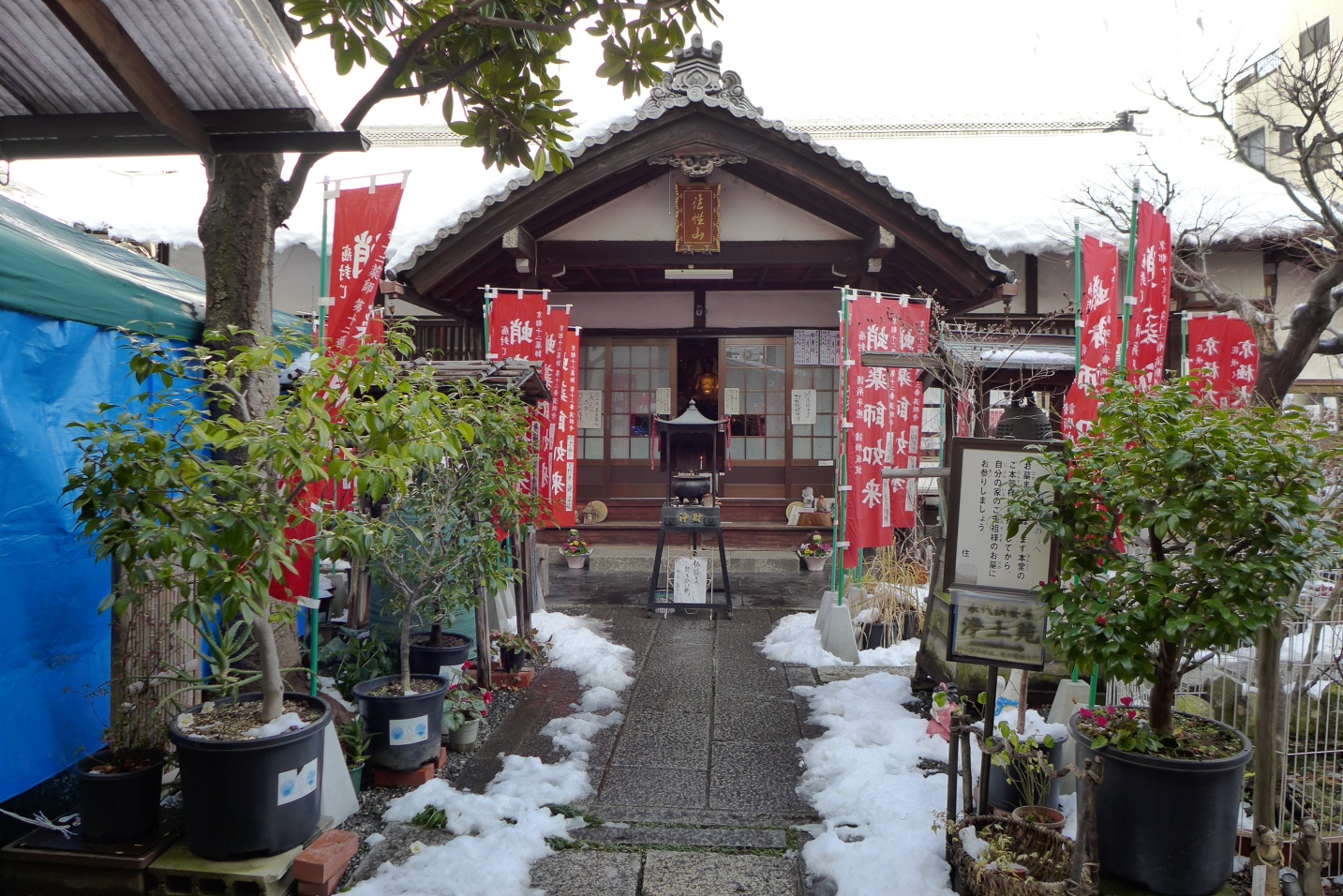 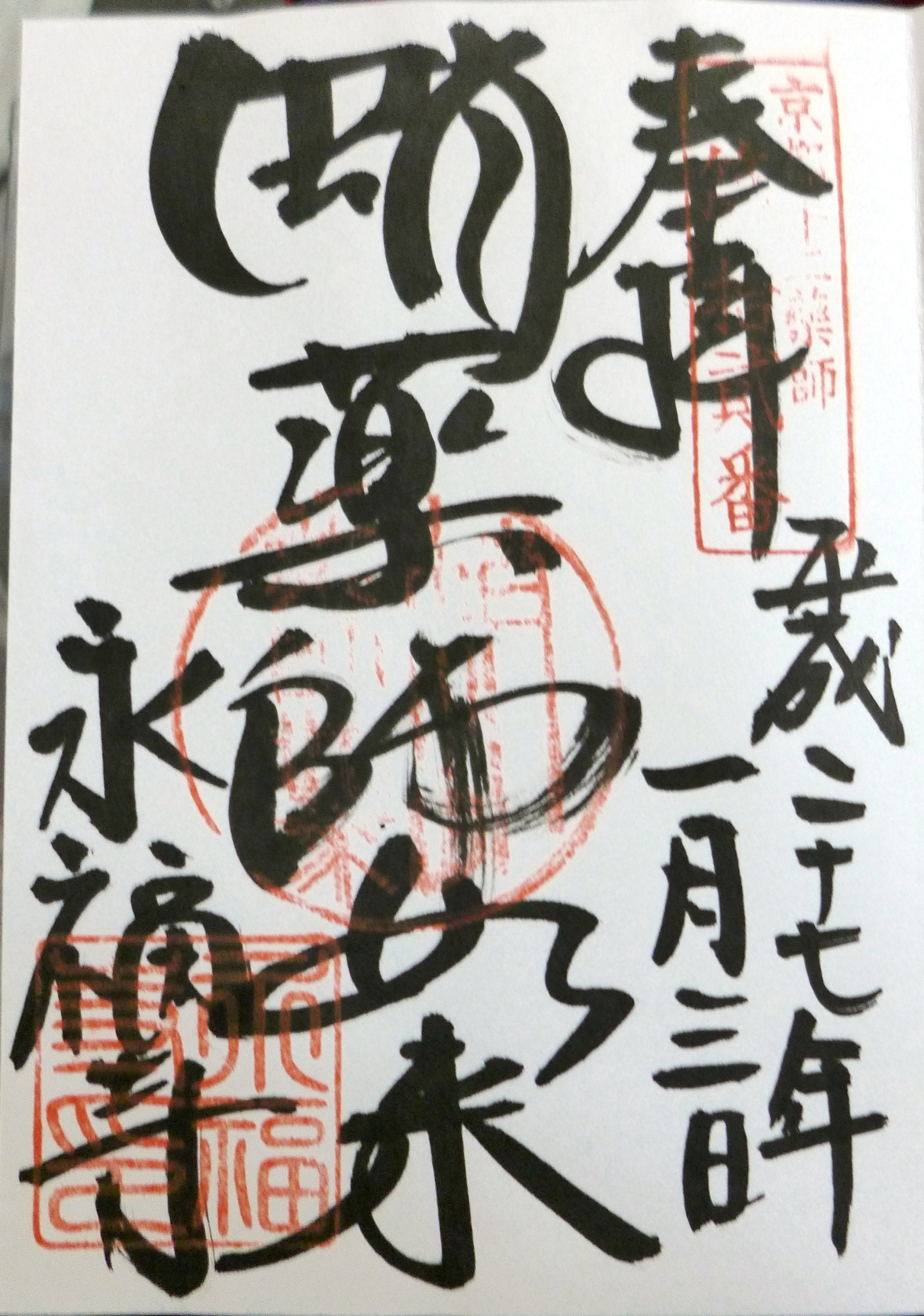 This is a very small temple in the same vicinity as Takoyakushido, just opposite an arcade. I thought it was a proper temple with stamps but it was quite confusing. There was a small portable shrine on the ground floor with all the information about the temple but we couldn’t find the actual official temple. It turned out to be up a rather treacherous flight of steps which were covered in snow. We made it up the steps and found the inner part of the temple with its statues and incense. Sadly, I wasn’t allowed to take any pictures of this part, but there were several golden statues inside that made the stairs worth it.

This temple also has a foundation story. The story goes that the monks carved a lotus pedestal for the statue of the Buddha but it seemed as if it was going to break when the statue was placed. They ended up placing the lotus upside-down and it did not break. As a result the temple became famous for its upside-down lotus flower. This became a symbol of salvation for women; there was the belief that women, being inferior to men and stupid according to ancient Buddhism, had the lotuses in their minds upside-down and therefore could not enter the Pure Land. Women would go to pray for salvation at this temple in order to enter the Pure Land (or be reborn as a man, because then you are good to go).

Anyoji was founded in 1018 in Nara, but was moved to Kyoto in 1110. It was finally moved to its present location by Toyotomi Hideyoshi in 1580. I wouldn’t really recommend visiting it as there isn’t much to it,

Though it was hard to walk around outside I did take a brief trip around my local neighbourhood to look at the snow. The snow was so early that there were even a few red leaves left here and there. Here are a few pictures from that trip. 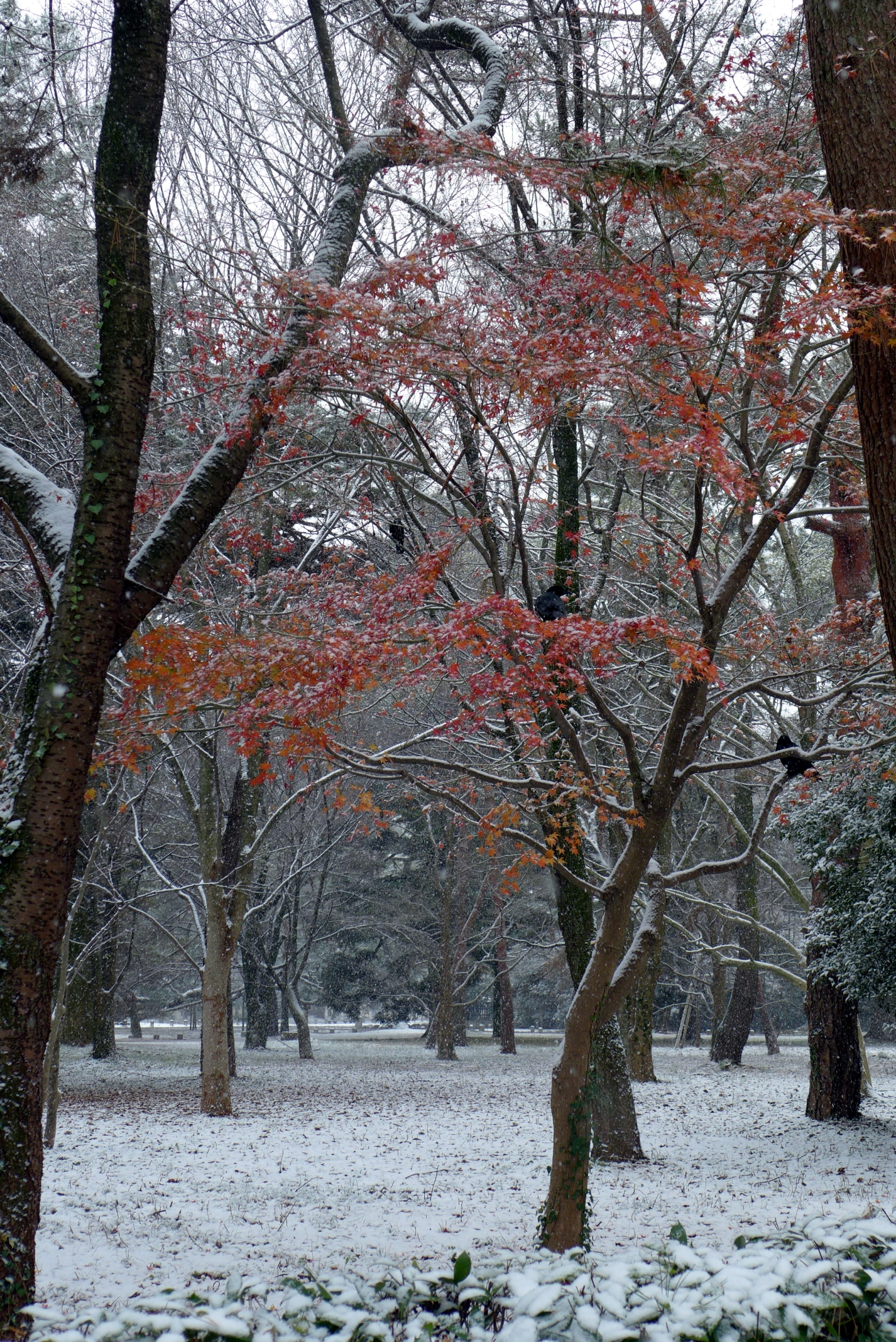 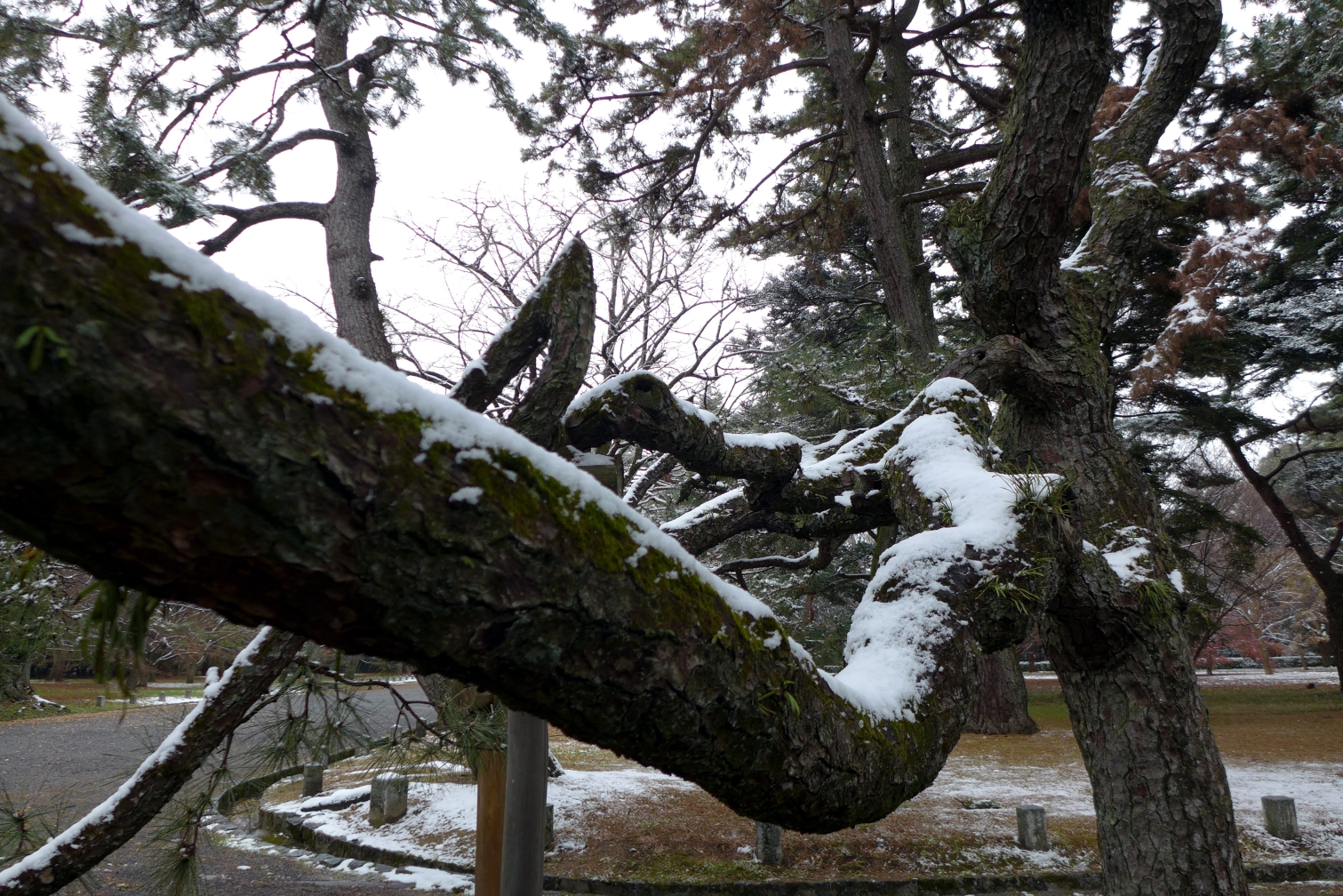 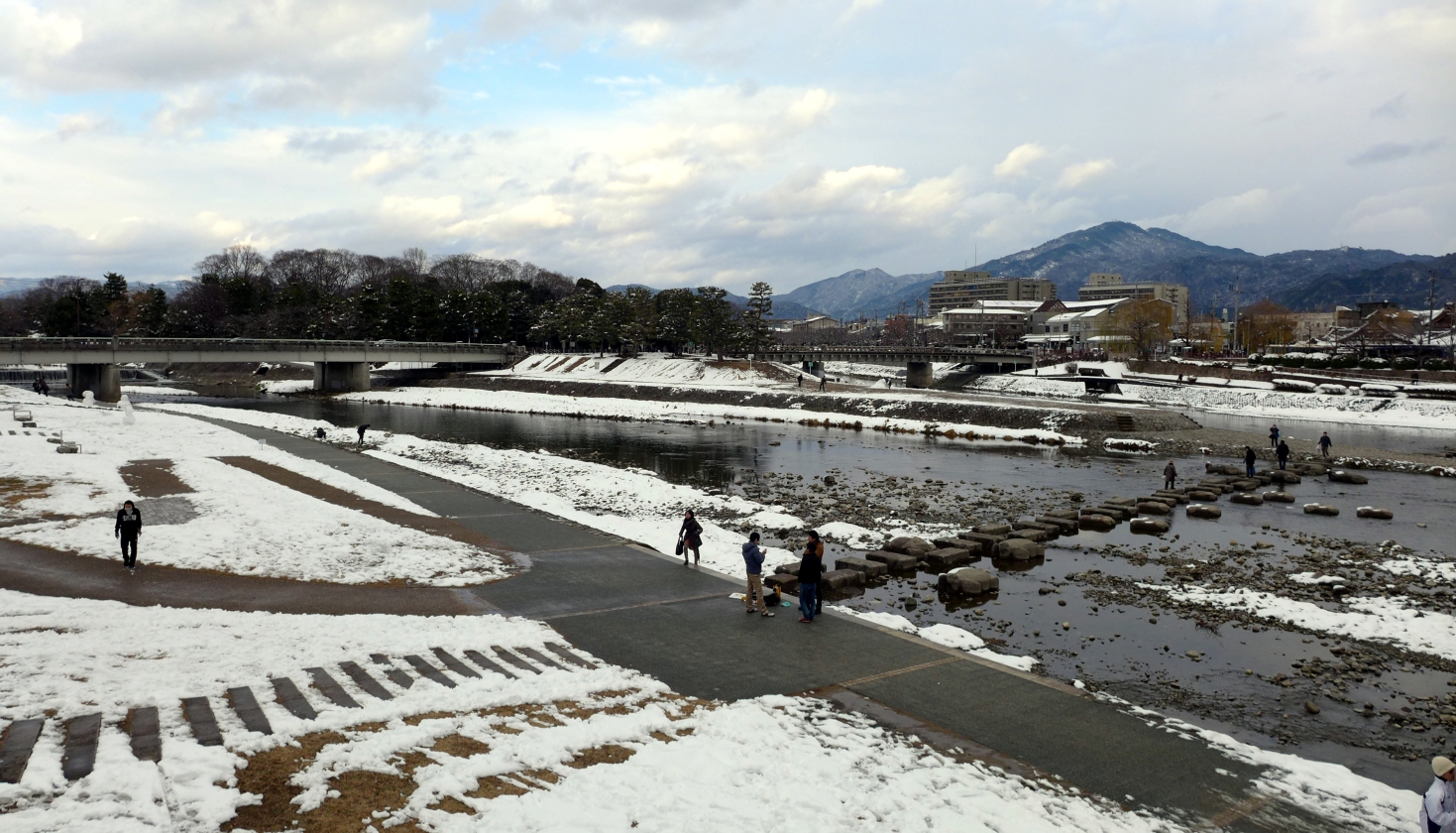 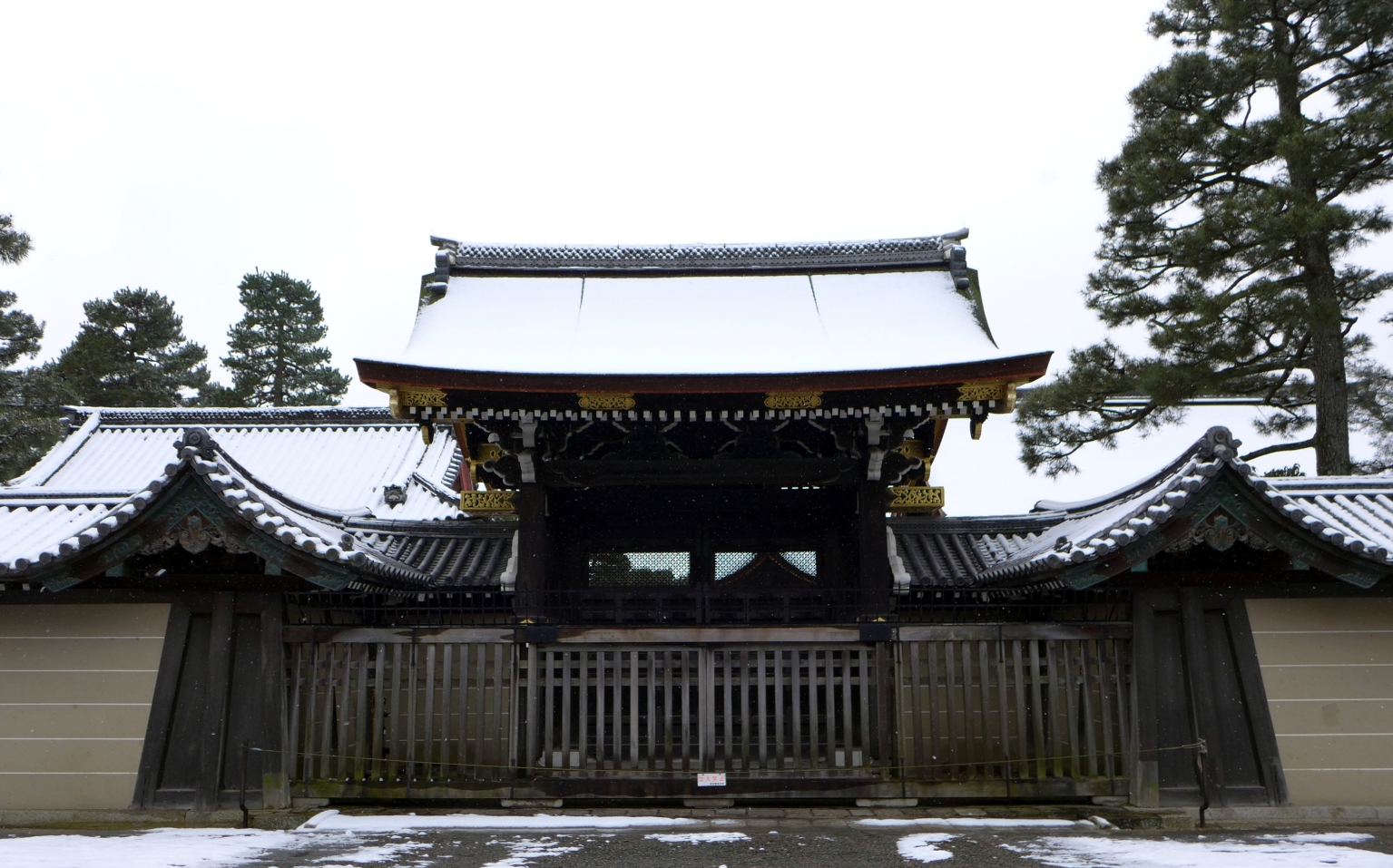 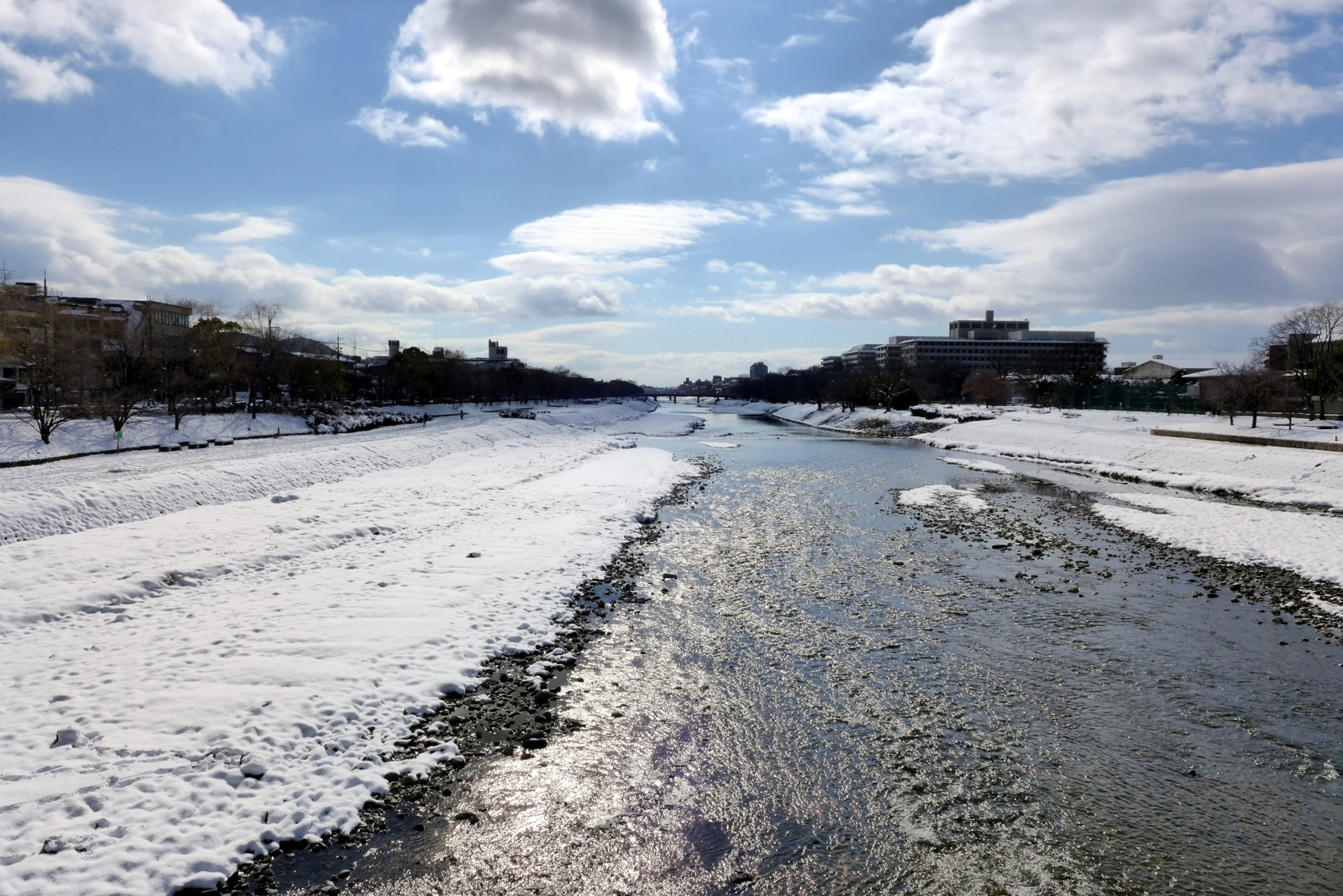 That concludes my December snapshots. Somewhat short but hopefully next month I will have more to share with you. I visited some great temples yesterday so new posts on that coming soon!