Tuesday was such a sunny day that I simply could not waste it by sitting inside. Sunshine is precious because it gets dark at quarter to 5, so I quickly left my dorm with no particular destination in mind. I walked East across the river and through some of North-East Kyoto before checking where I was on google maps. Finding that I was close to Heian Jingu (平安神宮), one of the major Shinto shrines in Kyoto, I decided to pay it a visit. I actually found another tiny temple nearby and got my book stamped, but I’ll save that for another post.

You may have noticed that its Heian Jingu (神宮) rather than Jinja (神社), this is because rather than being an ordinary shrine, a Jingu is connected to the imperial family. Heian Jingu commemorates two Emperors, Emperor Kanmu and Emperor Komei. While the deification of Emperors stopped after World War II, Emperors prior to this are still deified and are enshrined in Jingu. 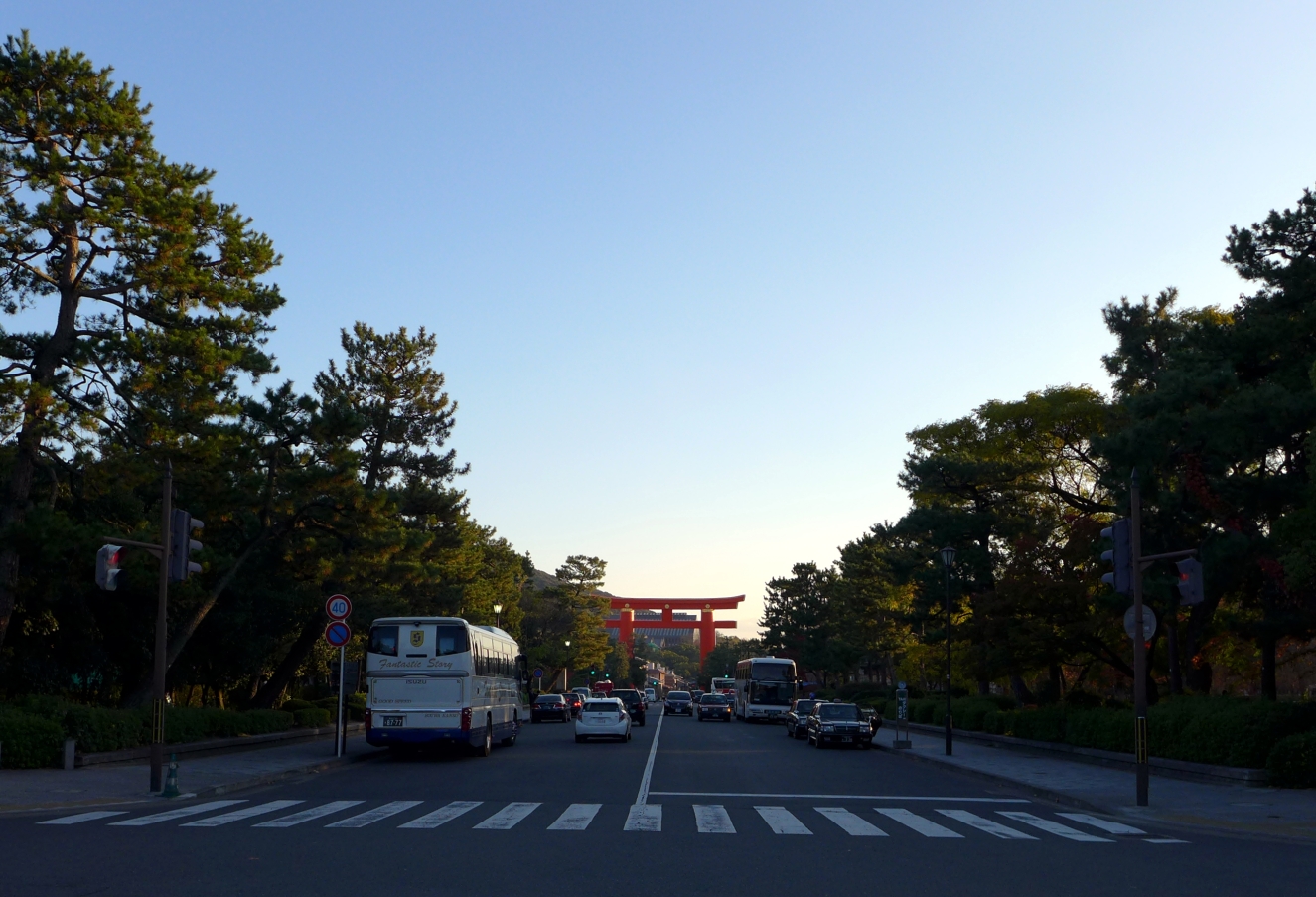 The Heian shrine itself is not ancient like most of Kyoto’s sights; it was built in 1895 for the 1,100th anniversary of Heian-kyo. Much like Tokyo used to be called Edo (江戸), Kyoto used to be called Heian-kyo (平安京), so the Heian shrine was really constructed to commemorate the founding of Kyoto itself. If you’re curious as to why and when the name change took place, it’s widely accepted that Heian-kyo became Kyoto at the end of the Heian period; ‘heian’ literally means ‘peace and tranquility’ and at the end of the Heian period (794  – 1185) there was a dispute over the succession that resulted in fighting within the city and the establishment of military rule. This made Heian-kyo a rather ill-fitting name and people began to use Kyoto instead, which just means ‘capital city’.

The first Emperor to be enshrined at Heian Jingu was Empeor Kammu, the 50th Emperor of Japan, who first moved the seat of power to Heian Kyo in 794. Kanmu was a sponsor of Buddhism, funding several trips to China by Japanese monks, though his move of the capital to Heian-kyo was mostly to avoid the increasingly politically influential Buddhist temples in Nara. So it seems he had a love-hate relationship with Buddhisim. Buddhism doesn’t deify the Emperors however, Shinto does, so whether the Buddhists would celebrate him or not remains open for debate. His legacy is largely just the implementation of Kyoto as a capital – prior to this the capital tended to move around depending on the Emperor’s wishes but from 794 onwards the capital remained in Heian-kyo.

The second Emperor of Heian Jingu is Emperor Komei, the last Emperor of Kyoto before the imperial family moved to Tokyo in 1868. He was angered by the presence of ‘barbarians’ and issued orders demanding they be expelled. The foreigners were his downfall in the end as he died of smallpox in 1867. He was the first emperor of the Tokugawa shogunate (1603 – 1868) to be consulted on national affairs – this marked the end of Tokugawa power and an increasing role for the Emperor. The Tokugawa shogunate was overthrown in 1868. (For more information on the presence of ‘barbarians’ in Japan, please see my last post ‘Buddhas and Barbarians’) 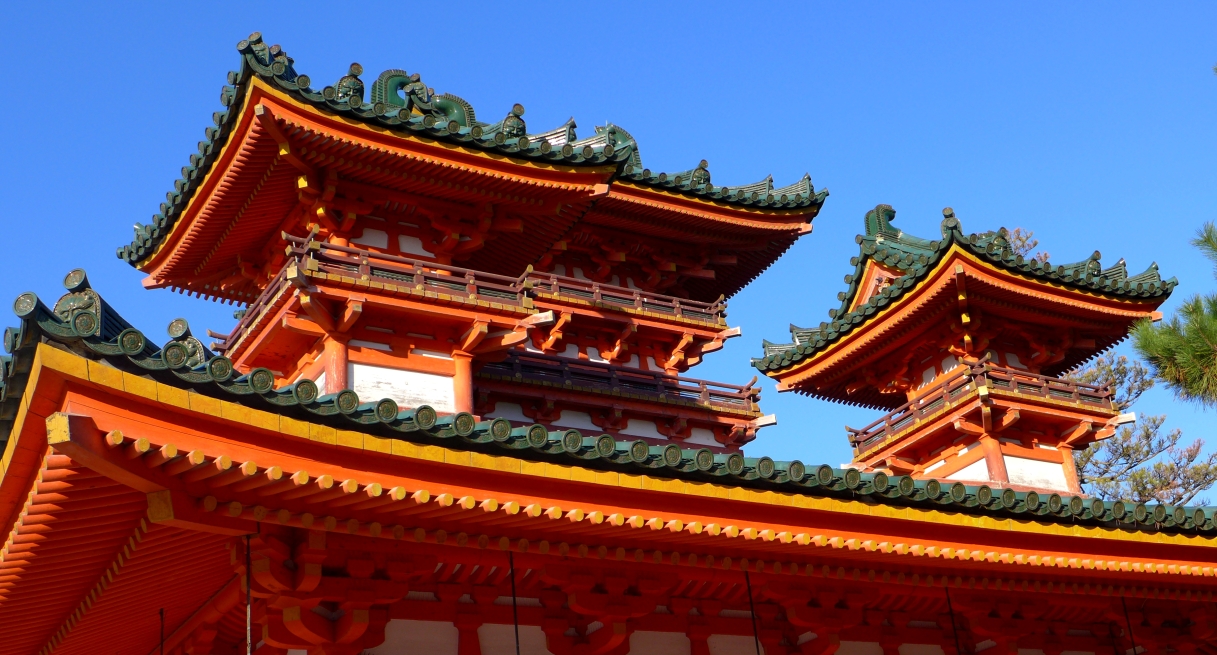 To commemorate the founding of the city, the Heian shrine was constructed as a replica of the old Heian-kyo palace (actually at 5/8ths the size due to budget issues) with Japanese style gardens. The shrine itself is magnificent but the gardens are truly spectacular. They were designed by Ogawa Jihei 7th, a very famous Japanese garden designer, and took 20 years to finish. I was lucky in that I went just before close on a week day so I had them largely to myself. They feature several lakes and beautiful trees. In the spring there will be sakura (cherry blossoms) so I’ll be sure to go again. Luckily it was sunny so the red maples were dazzling to look at.

Just past the entrance of the gardens, as you walk round, there is a display of one of the old train carriages used on the Kyoto underground. Quite a strange exhibition for a garden but I thought it was interesting nonetheless. Kyoto’s underground trains are now a bit more modern looking, though it did remind me of the train to Kurama, which, as a less used line, hasn’t had the same updates as the other trains.

The gardens are huge, covering an area of around 33000 square meters. They follow the Japanese ‘natural’ style – the bushes and trees have been shaped to look perfect, and there are some man-made features that blend in with the landscape. There are stepping-stones across one section of the lake, which were fun to cross (though worrying because I was holding my camera). I also made friends with some fish – I stood by the edge of the lake and the koi came swimming up to me. There must have been around 10 staring at me expectantly. Sadly I didn’t have any food to give them – I think on busy days you can buy food to feed them but as they were nearly closing the seller must have gone home. I have been told there are also turtles but sadly I didn’t see any. 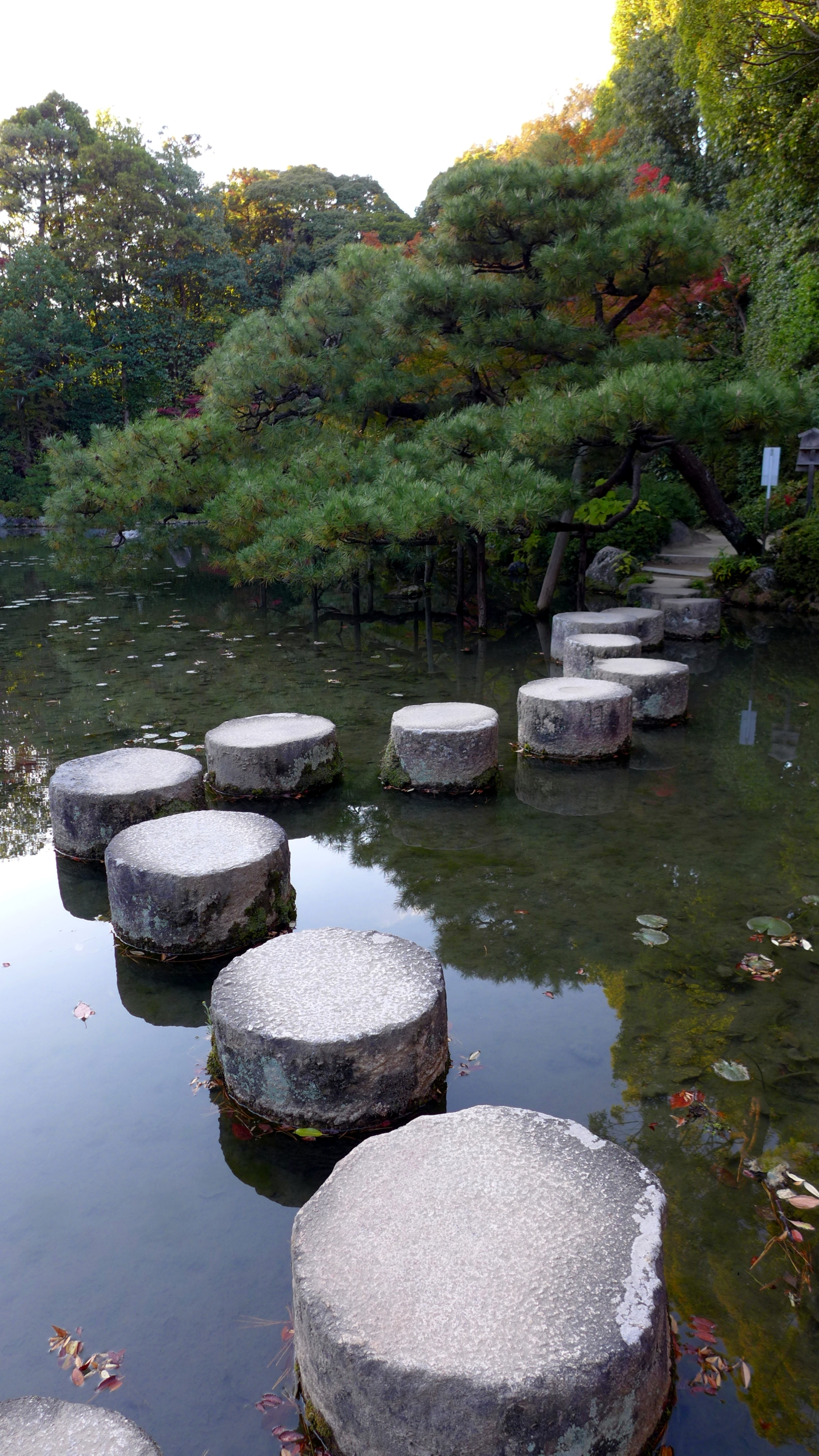 Towards the end of the walk around the gardens there is a beautiful bridge across the lake. It has benches on the inside so you can sit and look out across the water. Nearby there is a building for weddings, so I imagine after the wedding people take their pictures on the bridge with the lake in the background. 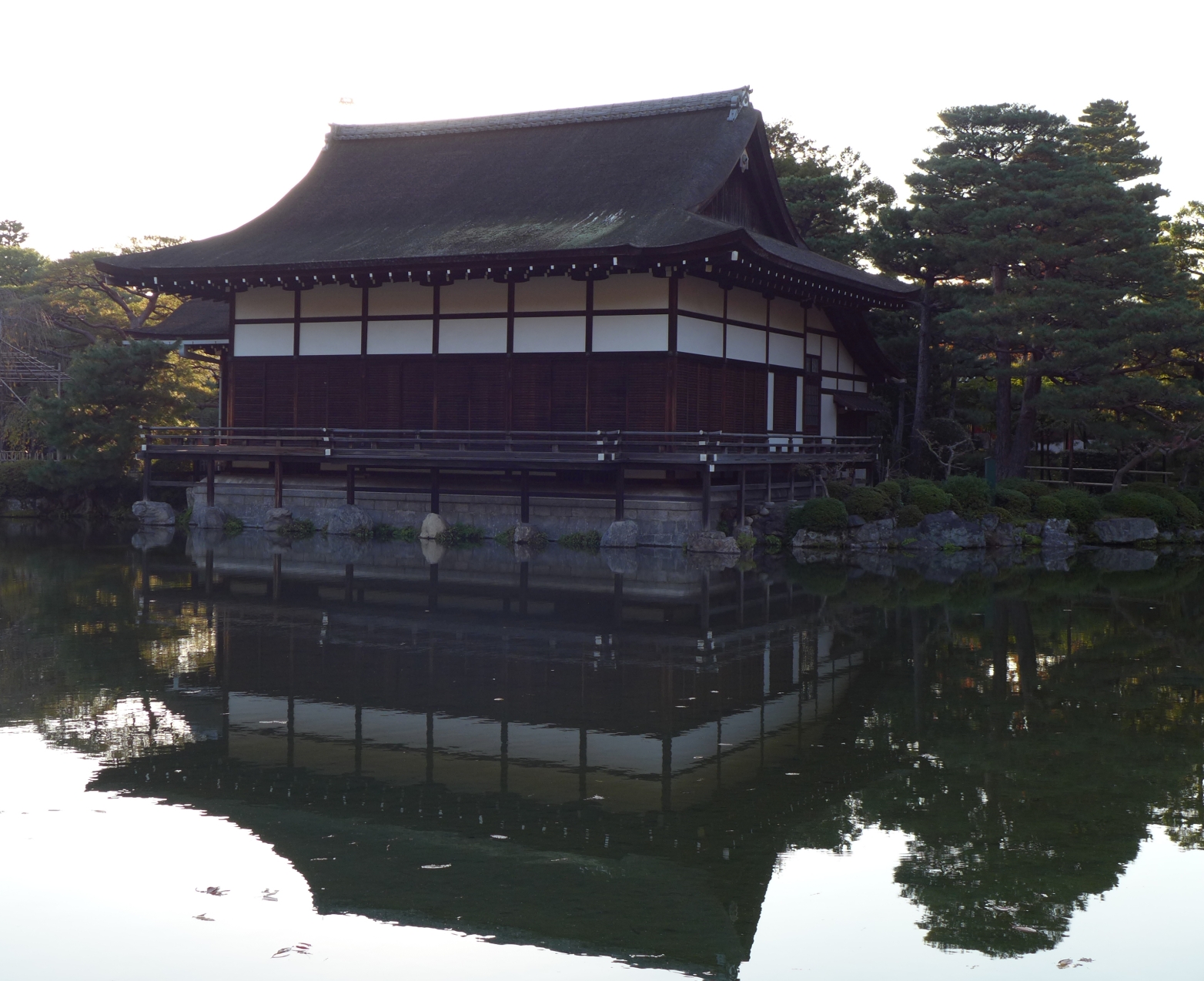 Entrance to the gardens costs 600円 (£3.20) for adults and 300円 (£1.60) for children, and you can buy the ticket at the gardens’ entrance. I think it’s definitely worth the price – you could easily spend several hours enjoying the gardens, or even just feeding the fish!

I noticed that the luck papers, or o-mikuji (おみくじ – you pick one out at random and it gives you a luck forecast) were tied to branches instead of to ropes as they normally are. From the other side of the temple I thought they were white flowers, but when I looked closer I realised they were folded up paper. You tie on your bad luck in order to stop it from following you out of the shrine gates, ensuring that you don’t have bad luck. If you get good luck you take the paper with you. Like most shrines Meiji Jingu also has prayer tablets which you can buy and write messages or wishes on – as it is a large shrine it has its own design on the back of the tablet (normally its just the animal of the current Chinese year). 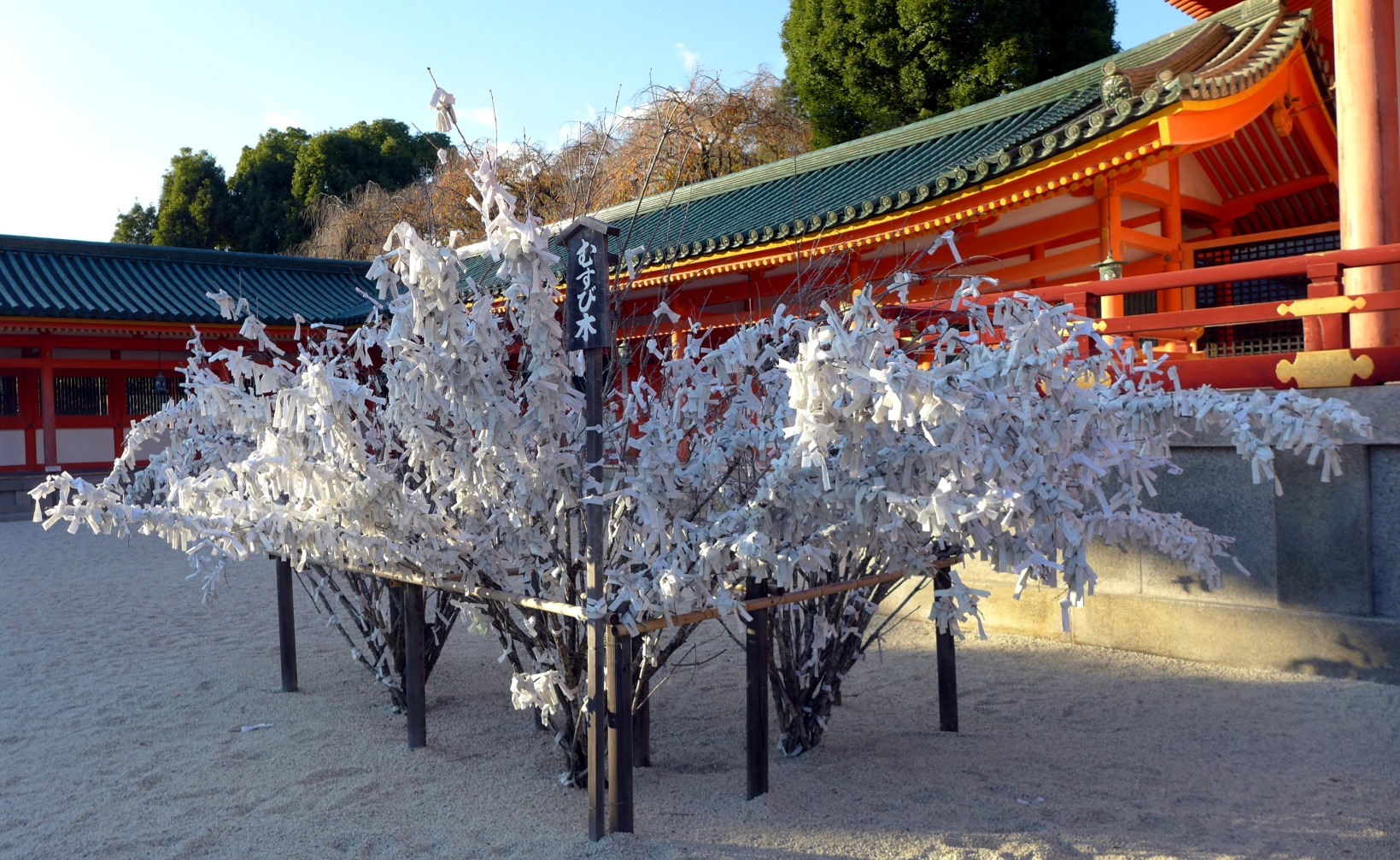 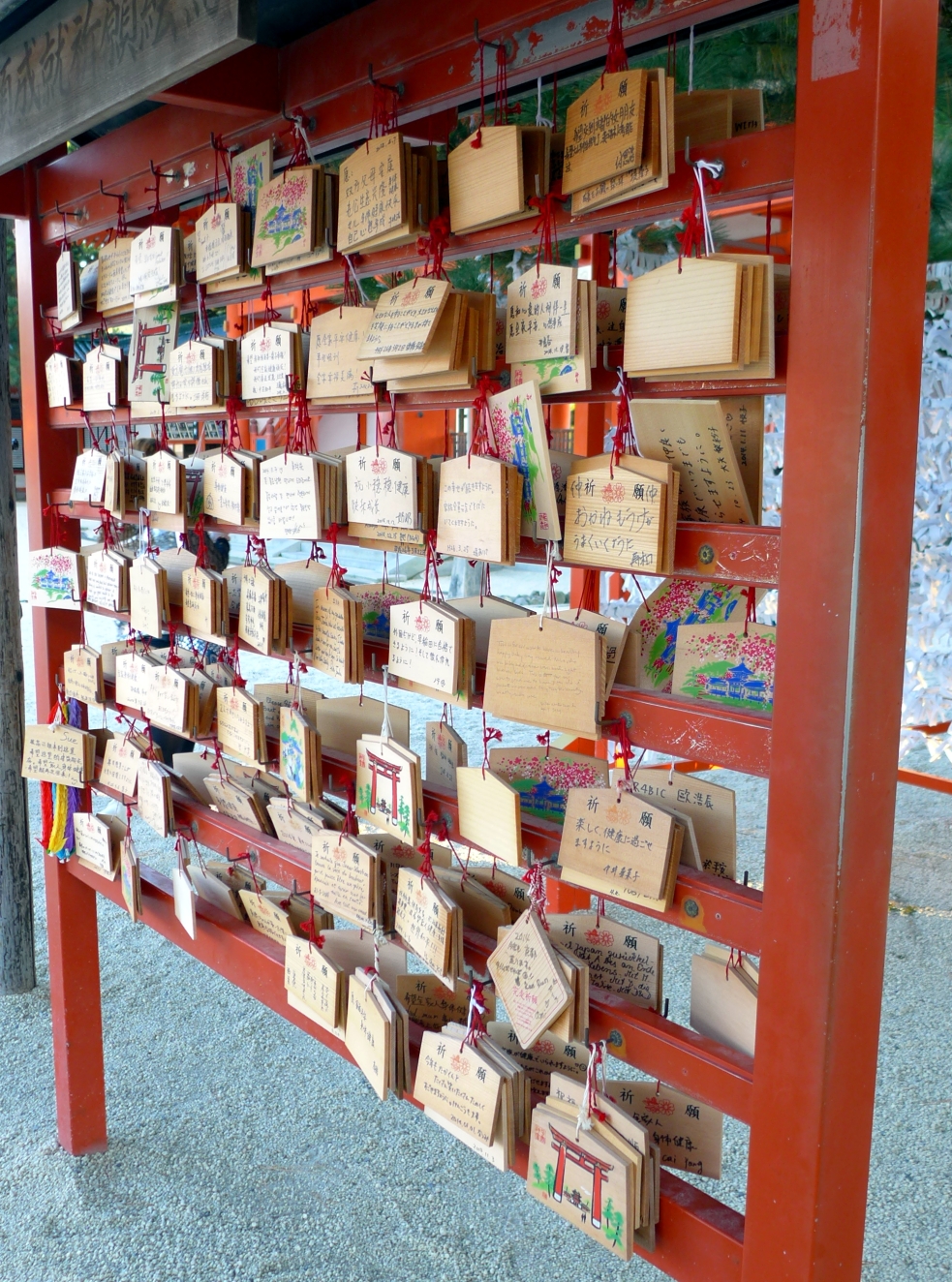 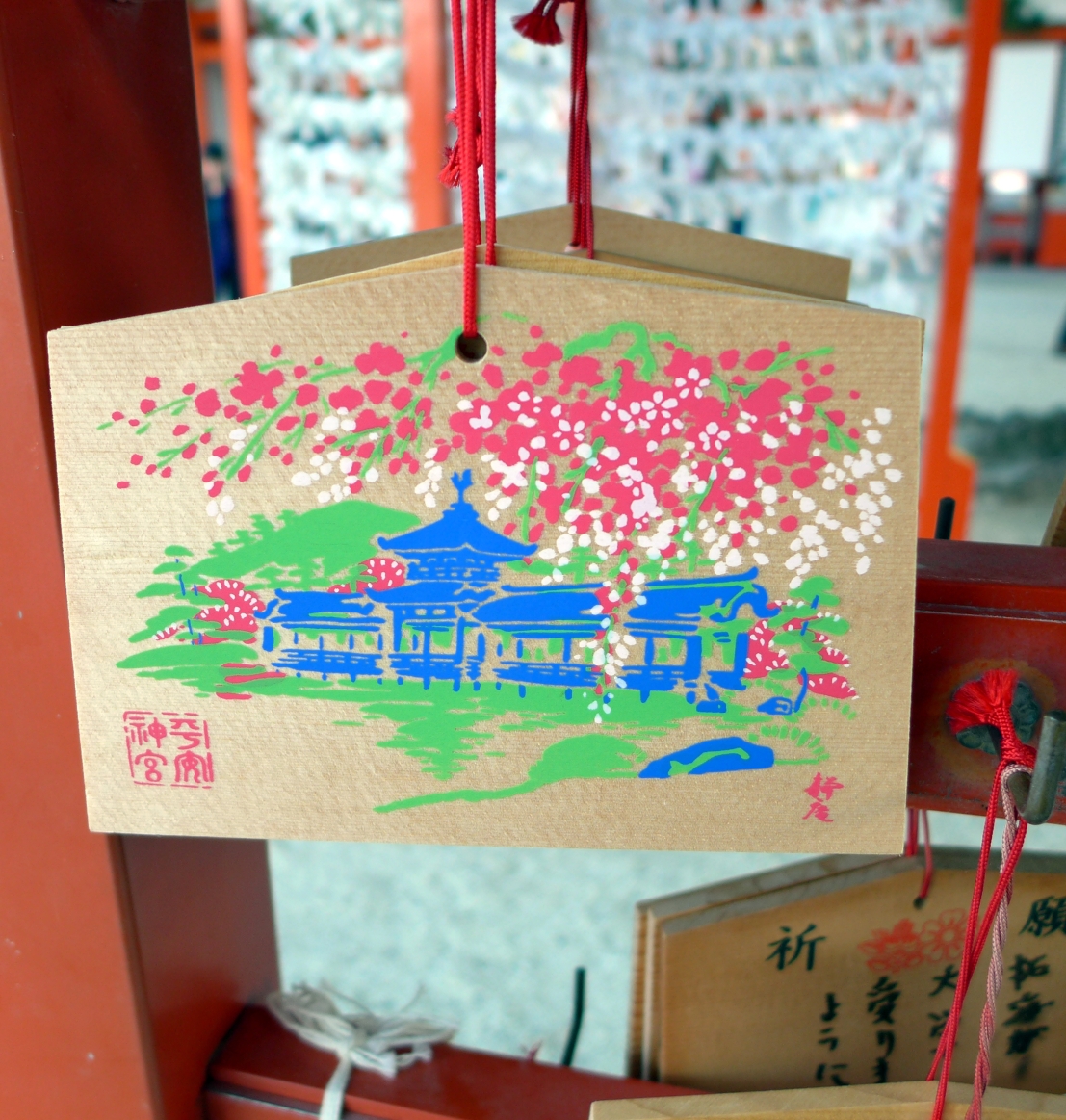 I managed to get my book stamped at the entrance of the temple. It cost 300円 and it was hand written. The larger shrine booths also sell all sorts of charms for good luck and safety too – you can see them displayed in front of the booth. Each shrine also sells its own stamp book – the Heian Jingu books were really pretty, perhaps if I fill up this one I’ll buy my next one there! 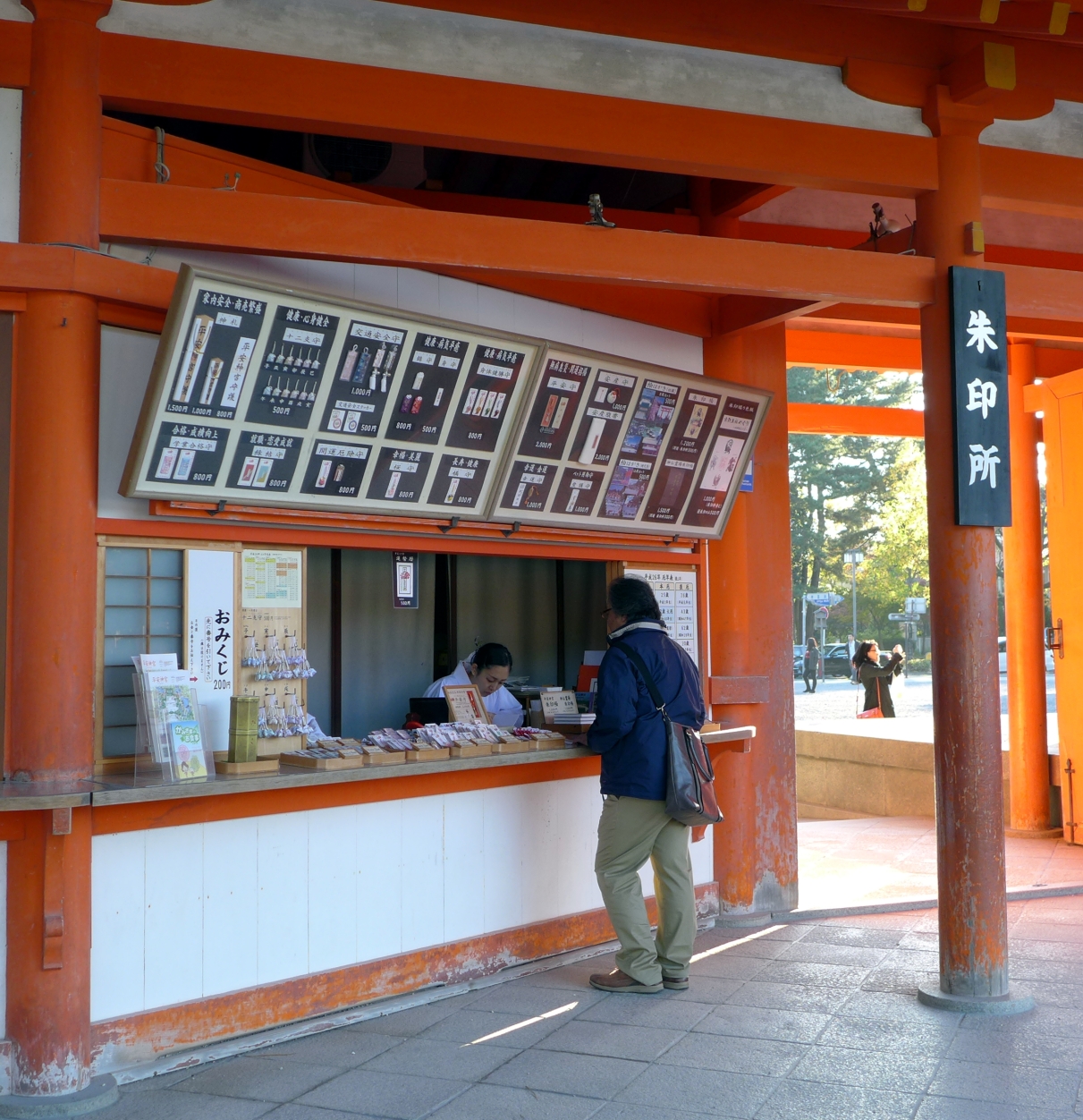 I think Heian Jingu gardens are a must-see if you are visiting Kyoto and like gardens – they were even better than the ones at the imperial palace (see post ‘Following Imperial Footsteps‘) and the shrine is huge. You can get to the shrine by bus from Kyoto Station, though if you have time walking through Kyoto is something worth doing in itself.

One thought on “平安神宮 In Memory of Peace and Tranquillity”