Yesterday was a beautiful Autumn day, so what better to do than visit another Temple? I got on the train from Demachiyanagi station and headed to Tofuku-ji, one of the temples renowned for its beautiful Autumn leaves. The leaves will be even better in a few weeks but if I saw all the temples’ leaves at their finest I’d be rushing between them all week. The time when leaves turn red in Japan is called Koyo (紅葉) and its one of the two best times to visit Kyoto (the other being cherry blossom season).

Tofkuku-ji (東福寺) is a Buddhist temple founded in 1236. It was inspired by the great temples of Nara, Todai-ji (東大寺) and Koufuku-ji (興福寺) and its name is a combination of those two temples’ names. It is one of the 5 great ‘mountains’ of Kyoto, the ‘Gozan’ (五山), which are the 5 main Zen Buddhist temples in Kyoto. Tofuku-ji is ranked number four out of five – I’m interested to see what number one is like!

As is the norm for almost all temples in Kyoto, Tofku-ji is not the original building – it burned down. This is what happens when all your national monuments are built out of wood. It was reconstructed in the 15th century and as is custom it was rebuilt exactly to the plans, keeping it in the style intended when it was first built. In Japan you don’t get the interesting amalgamation of architecture that you sometimes get in European churches and castles, where burned or destroyed sections are brought ‘up-to-date’ according to the period. It shows a respect for the past that throughout the centuries Japanese monks and architects have preserved original architectural styles (while creating new ones by constructing new buildings instead of ‘improving’ old ones). 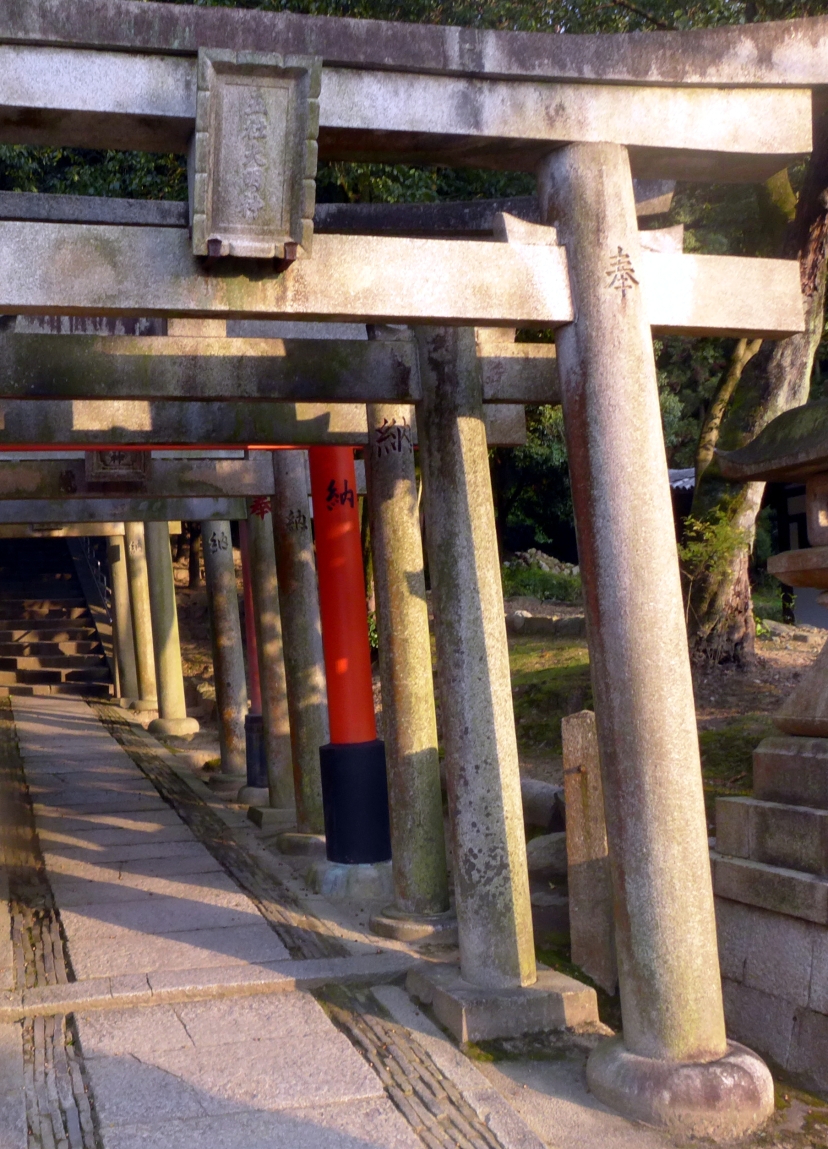 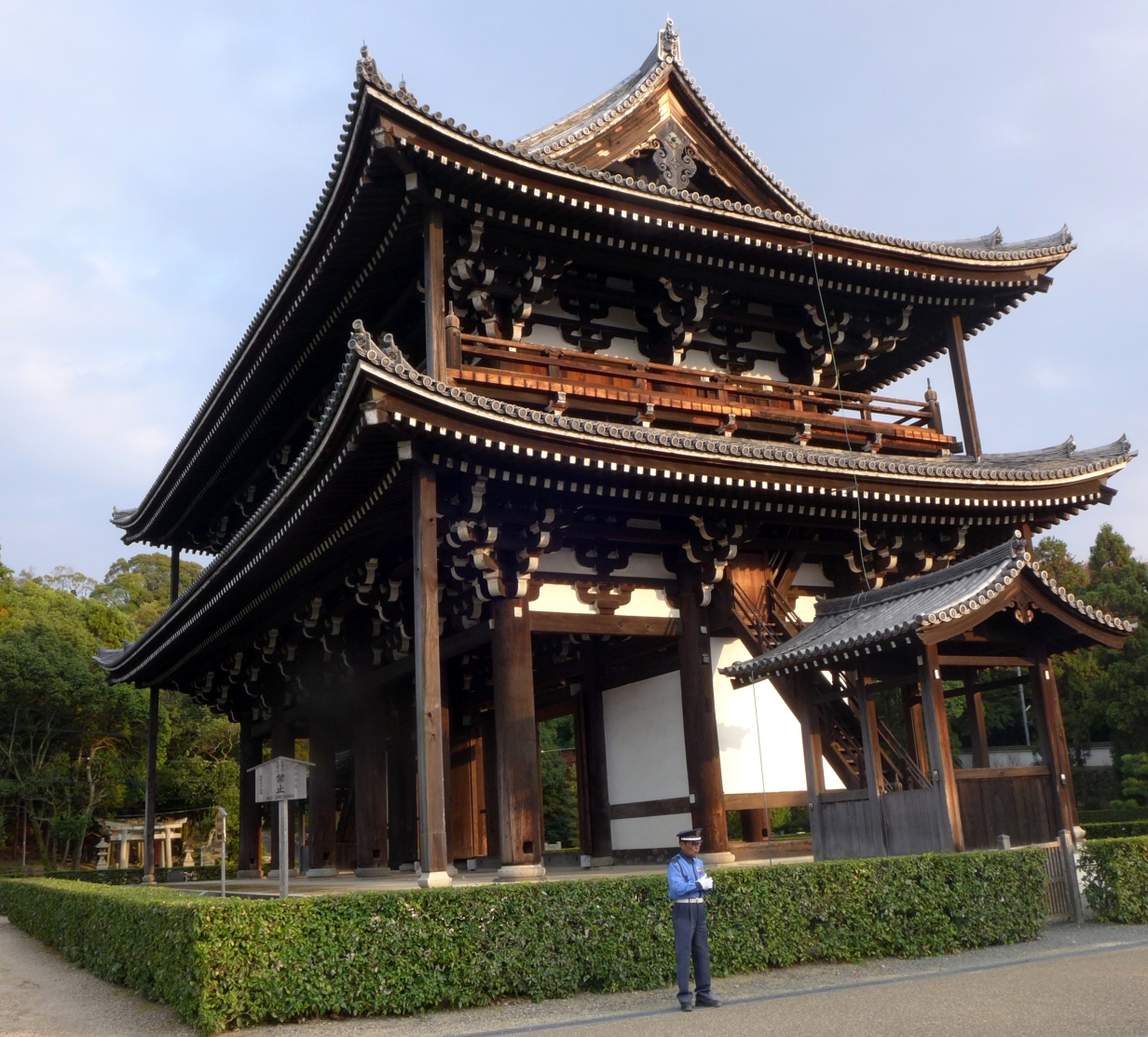 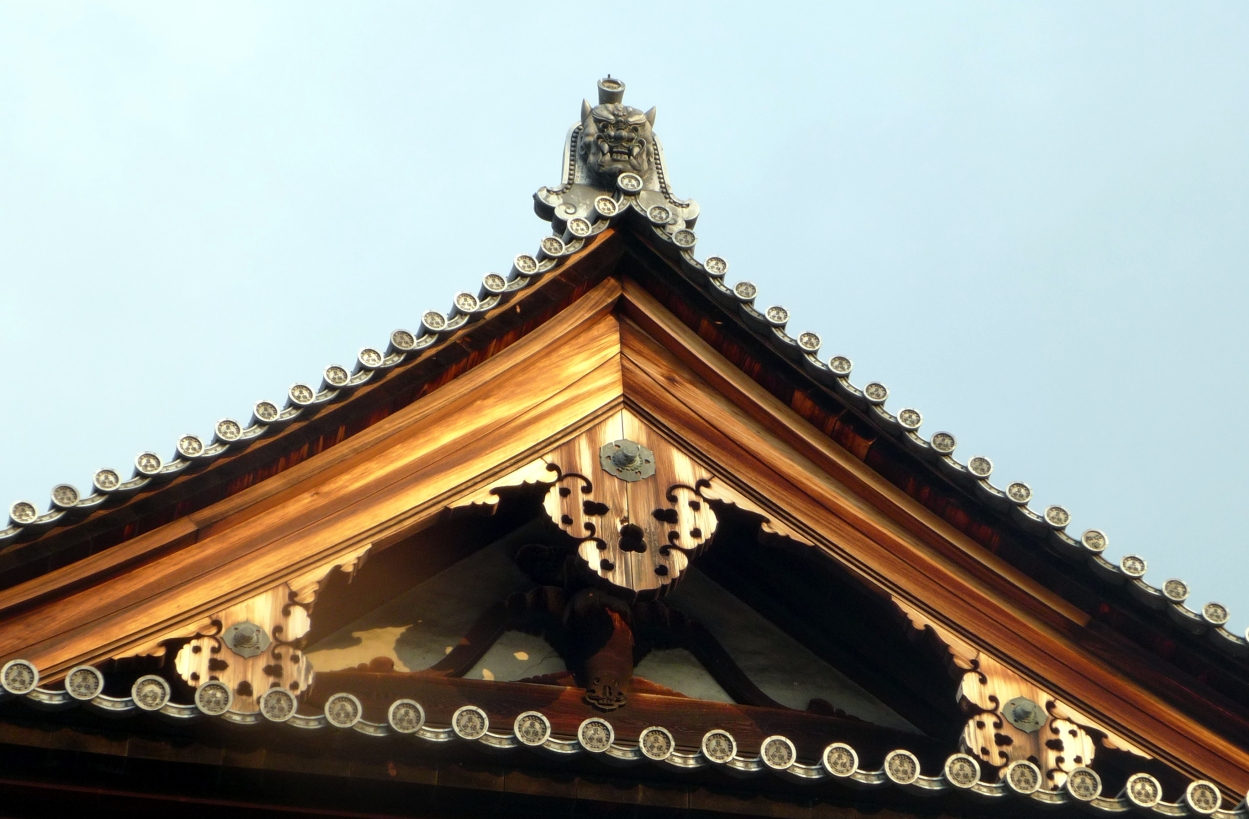 Tofuku-ji itself is free but you have to pay to enter the gardens, and its well worth paying a visit. The entrance price is 300円 (£1.60) and gives you access to the autumn garden and the zen gardens. The autumn garden has a viewing platform that overlooks the tops of the trees, the crimson leaves look like a sea of fire between the platform and the temple. 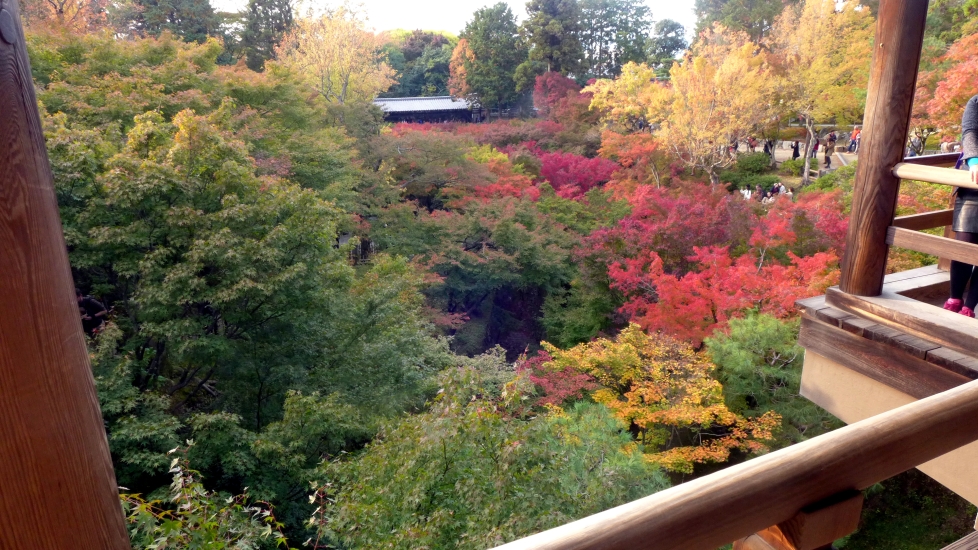 The platform was pretty busy (pretty much everyone from Kyoto comes to see the koyo at the famous temples) but its wide enough for everyone to take a good picture. Once you leave the platform you can walk down through the trees – the walkway is levels of stairs and paths all the way down to the stream that flows under the temple. Though it’s a short path its easy to spend ages here just looking at the trees surrounding you. I was behind a couple dressed in kimono and  yukata, enjoying the koyo in traditional Japanese dress – an anachronistic image that reminded me that people have been visiting Tofuku-ji to see the koyo for centuries. 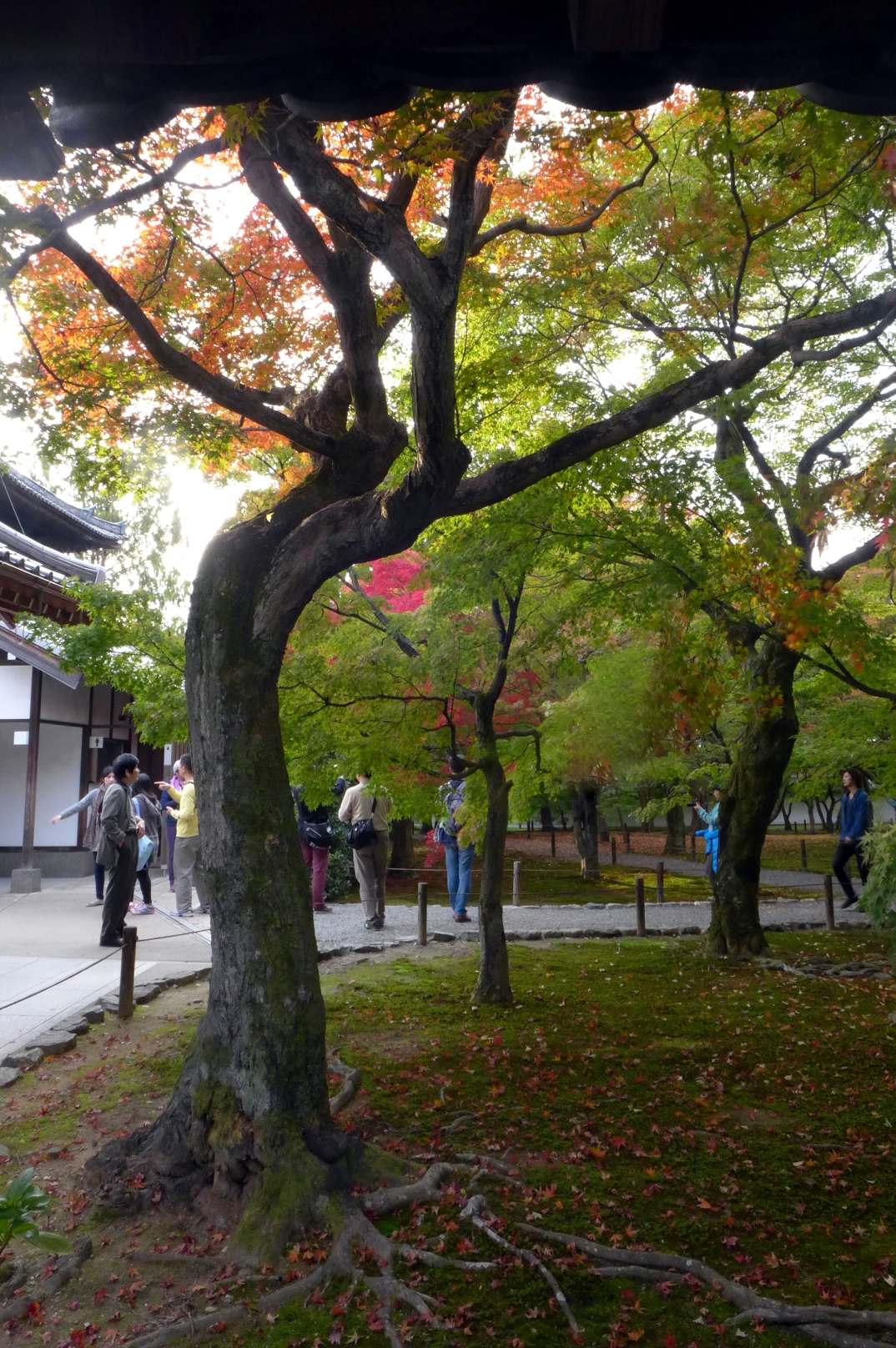 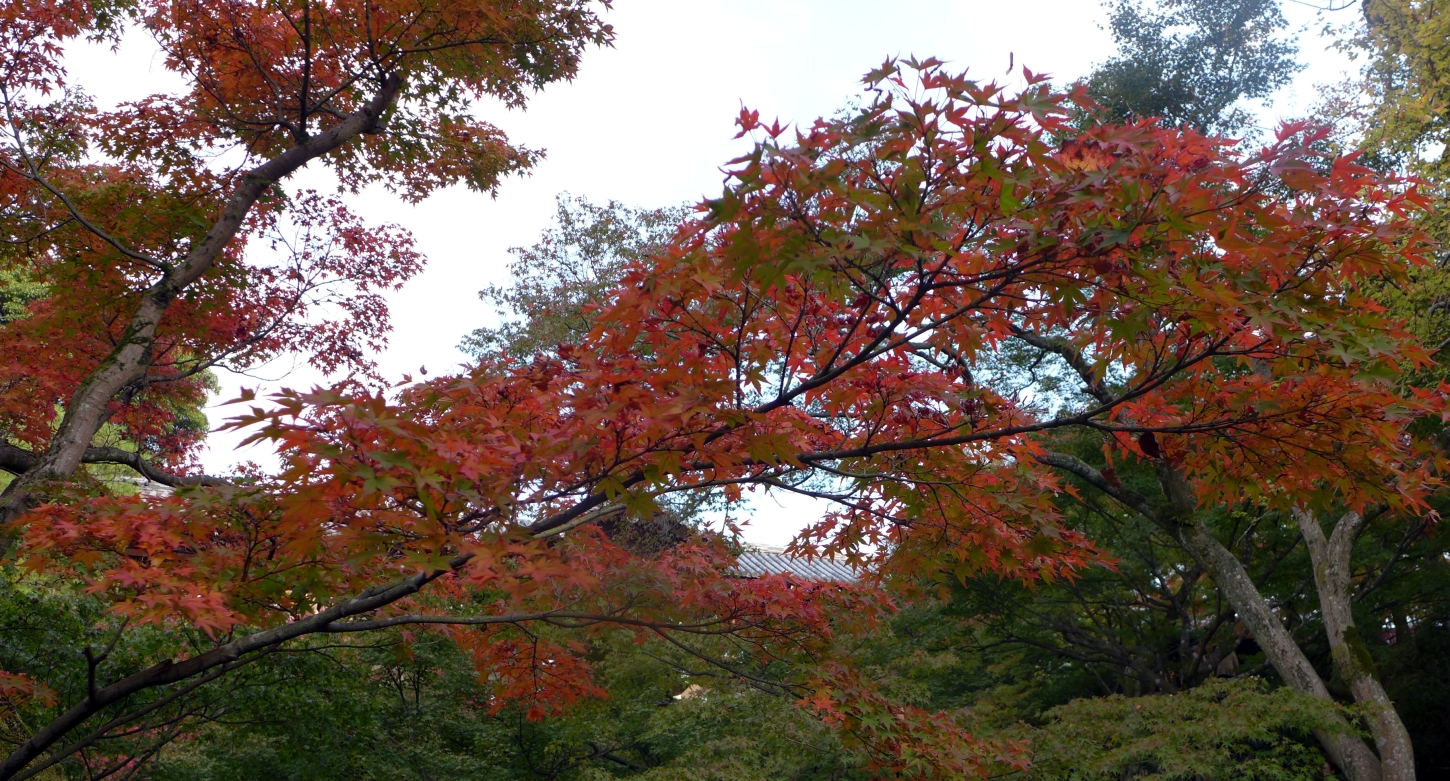 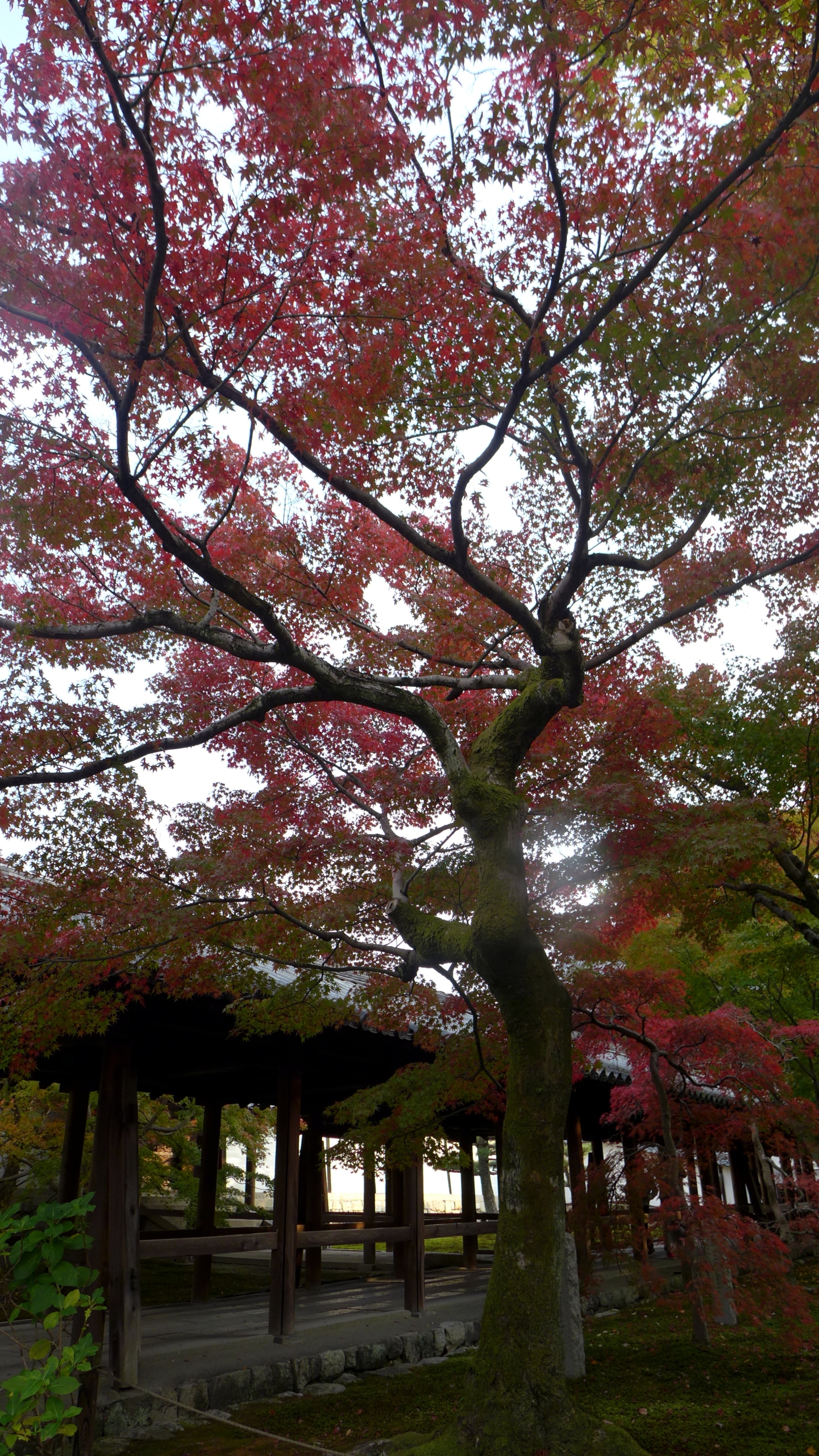 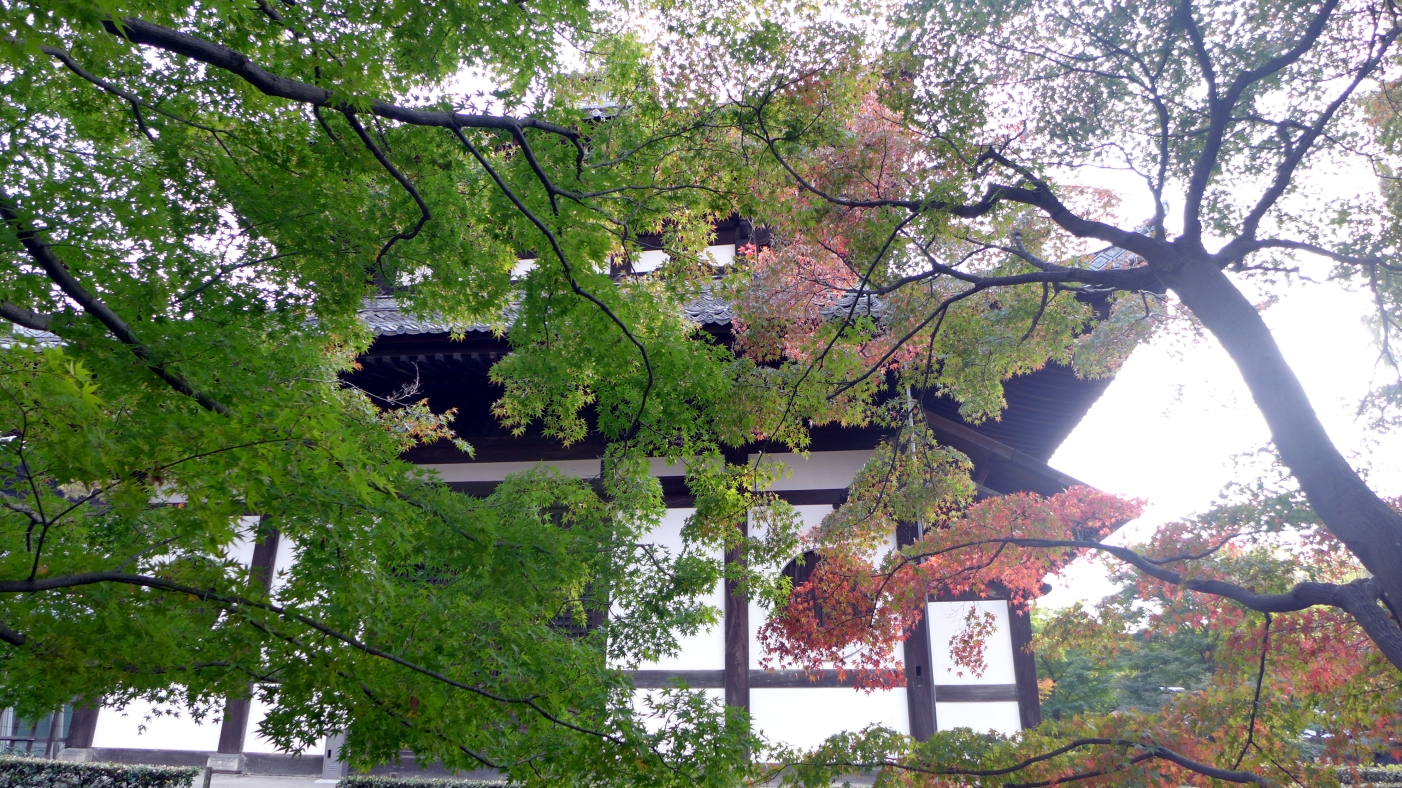 As well as the seasonal Autumn viewing, Tofuku-ji also has a zen garden and a moss garden. The moss garden was designed in the 1930s and is considered an example of the renaissance of Japanese garden techniques in the 20th Century. The designer, Shigemori, argued for a ‘hybrid’ approach – prior to his work people either remained stringently traditionalist or modernist, gravitating to these extremes. Shigemori preferred to build upon previous garden designers while innovating, progressing the art rather than clinging to an extreme.

The zen garden is comprised mostly of very carefully raked gravel, as is common in Japanese zen gardens. There is a bench that you can sit on and contemplate the gravel but I elected to continue looking around. I think it would be very relaxing for someone who enjoys patterns and order – the gravel is uniform and very carefully tended to, helping to contribute to a sense of zen meditation and clear-mindedness. 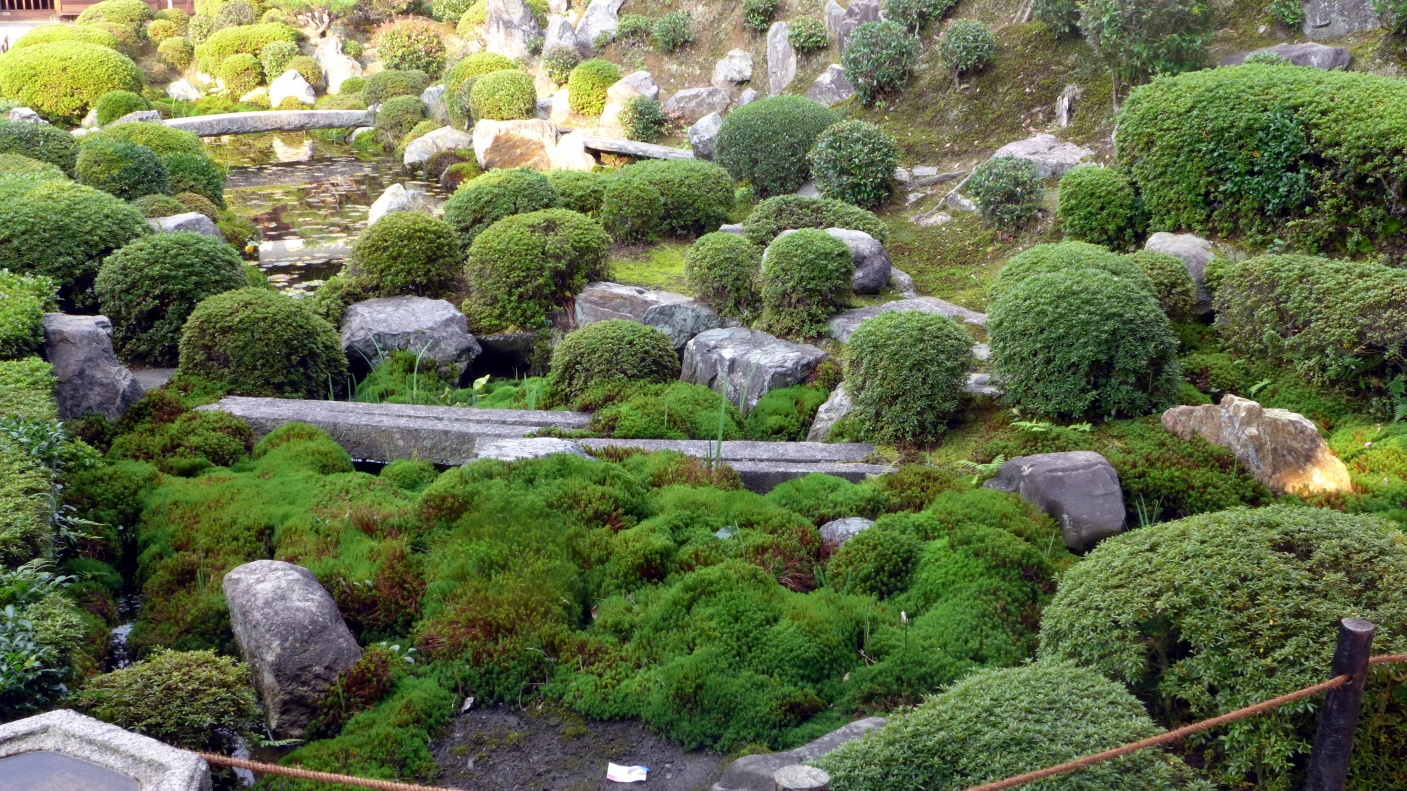 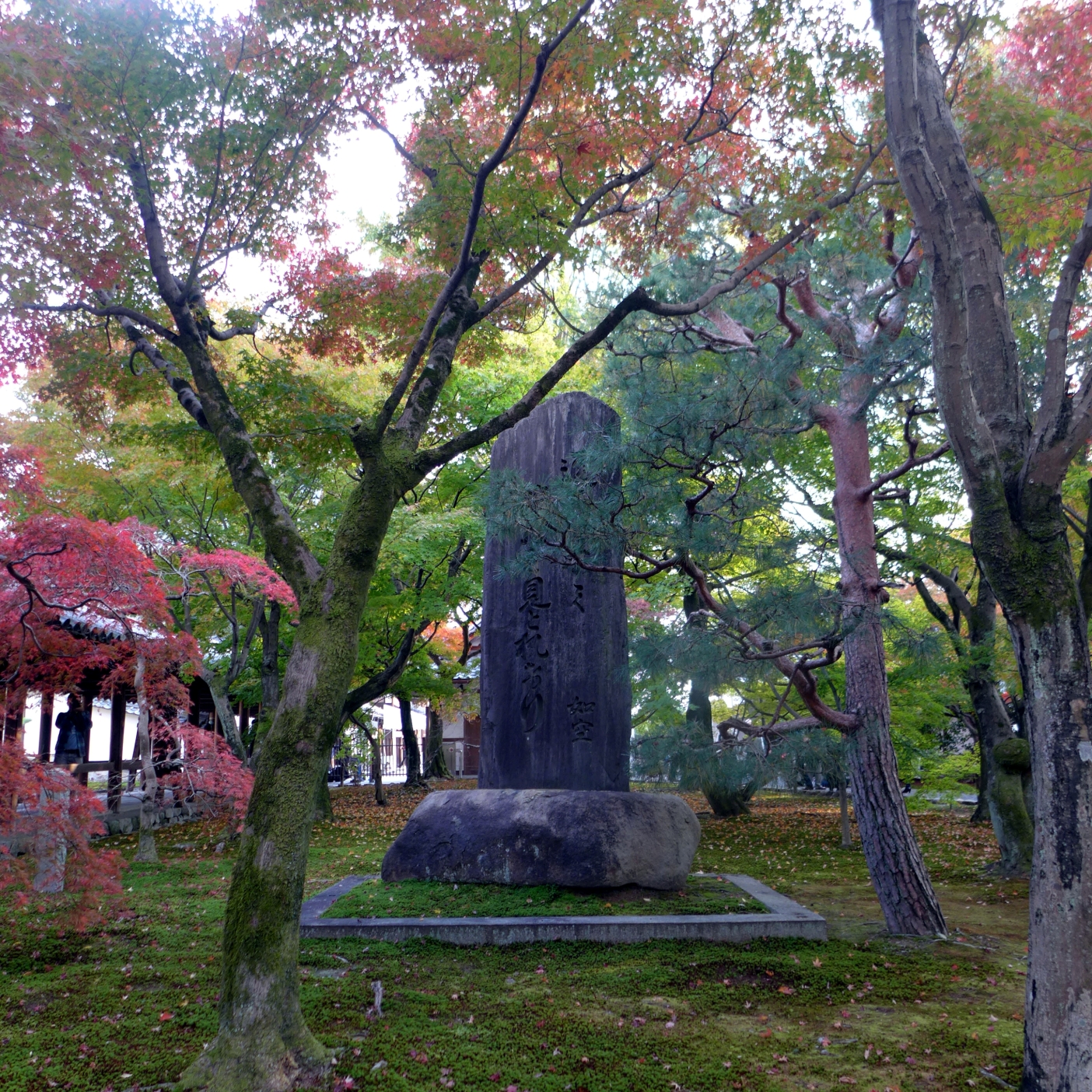 Once I left the temple gardens I had a look around the main temple complex itself. The great gate is one of Japan’s national treasures;  it is the oldest great gate (山門 – sanmon) in Japan. Tofuku-ji actually has 24 sub-temples, which are rarely visited by the public, maybe I’ll pay them a visit next time.

I also found the stamp booth and got my book stamped. This time there was a choice between hand calligraphy (for 500円 – £2.70) and a stamp that looks like calligraphy (300円 – £1.60), I went with the stamp as the lady seemed quite keen that I picked that one (probably didn’t want to have to write it), but she was very nice and complemented me on my Japanese (as old ladies are wont to do). 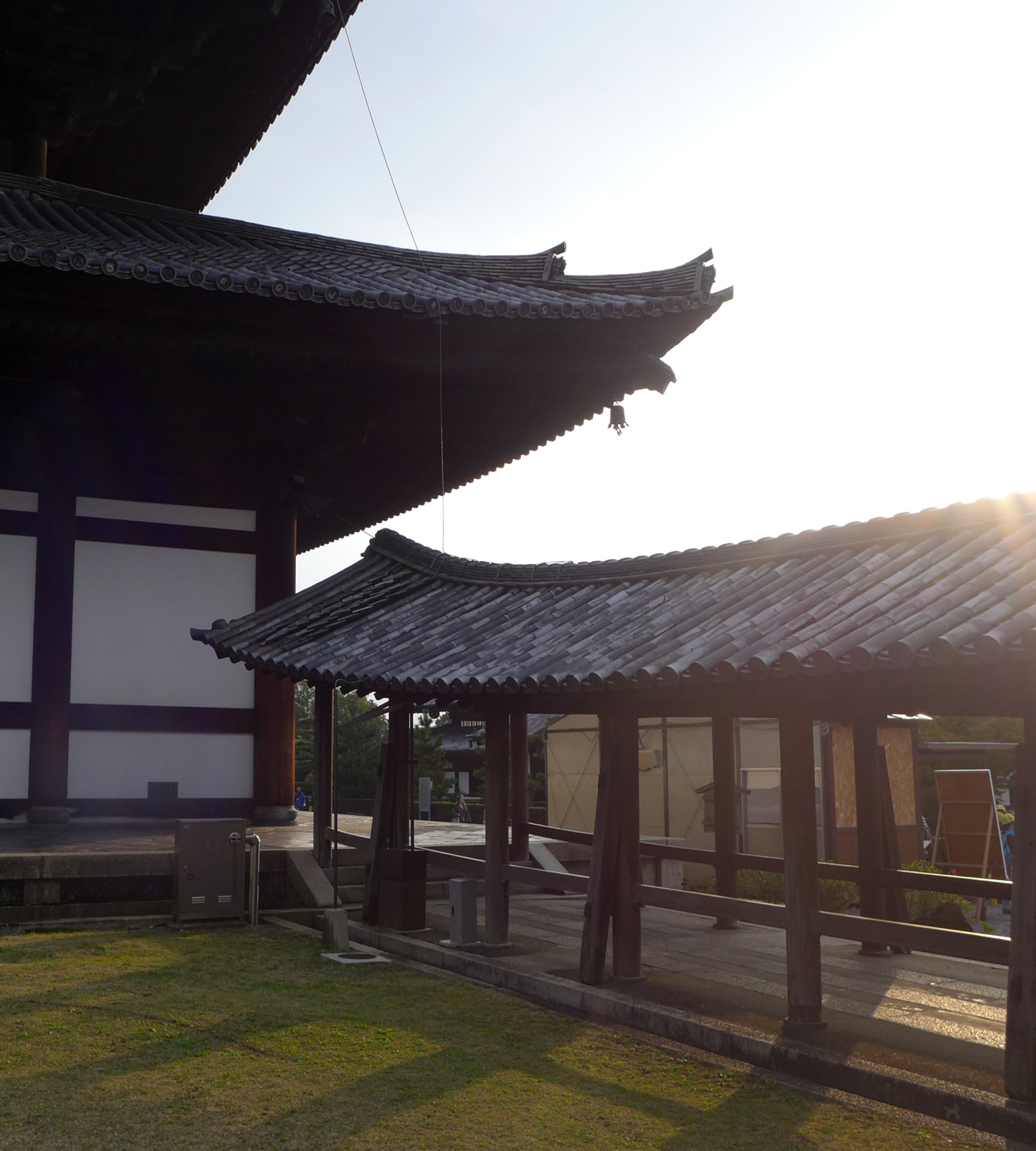 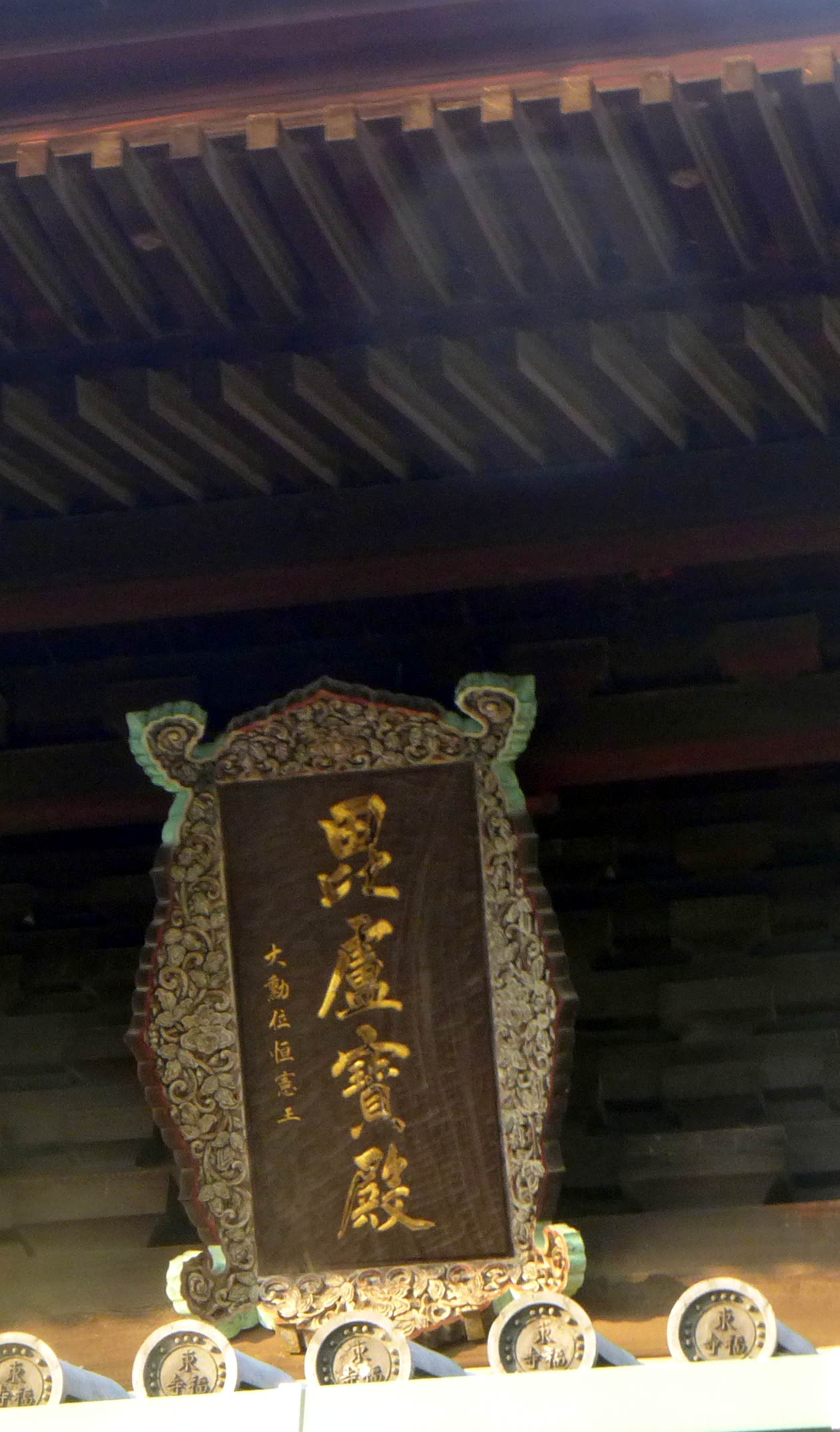 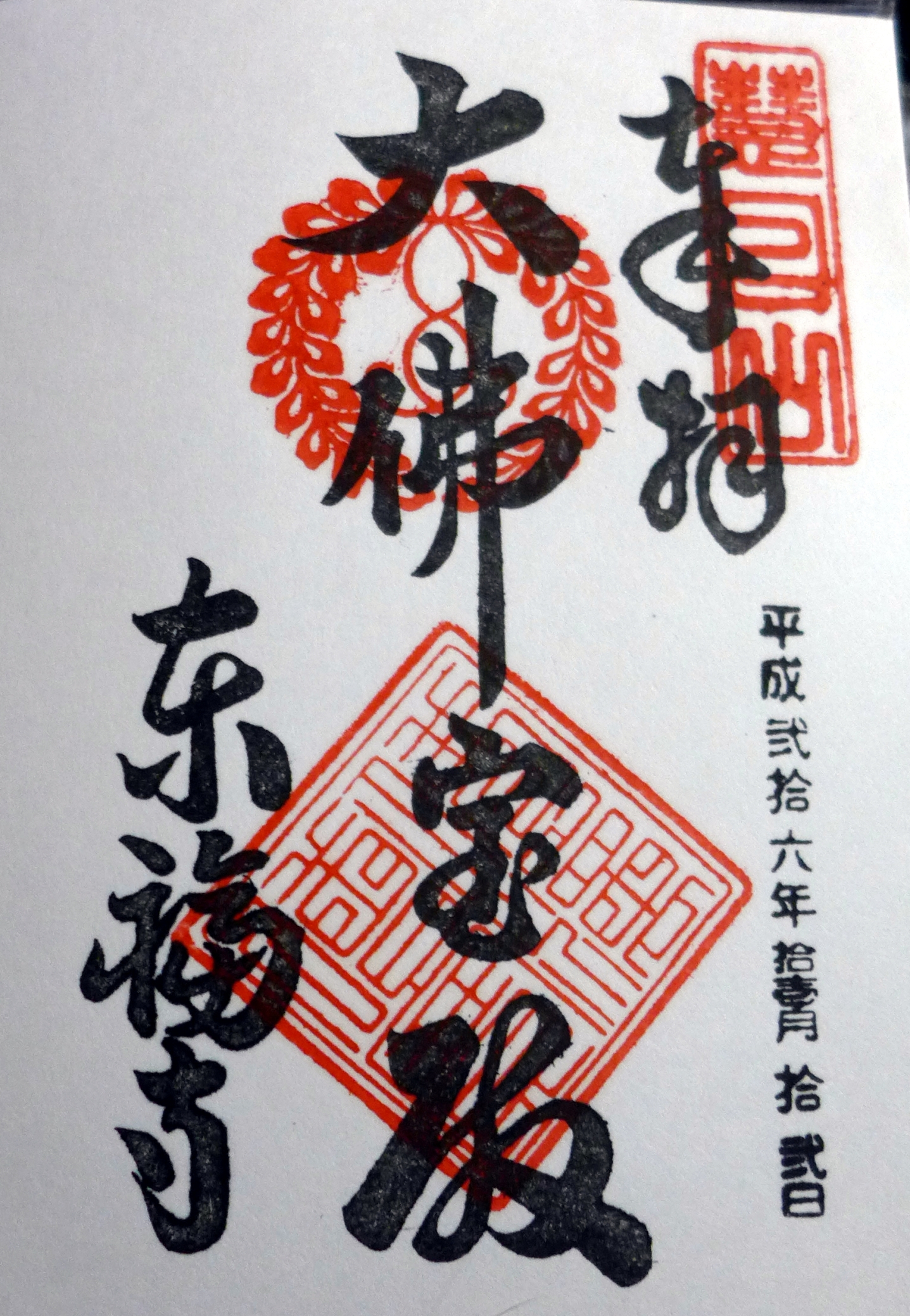 I really enjoyed my trip to Tofuku-ji, espeically as the sun was being kind and shone throughout my trip – it’s amazing the difference a little sunshine makes to the beauty of the gardens. I would recommend visiting Tofuku-ji, especially if you visit in Autumn. You could combine it with a trip to Fushimi-inari (the shrine with thousands of gates) as the train stations are next to each other on the Keihan line. The station is a short journey from Kyoto station or from North Kyoto (10 mins from Kyoto station, 20 from Demachiyanagi). Apparently the temple also has a huge painting of the Buddha on his deathbed but the last time they let the public see it was 2003, so I wouldn’t hold your breath on that one.