Yesterday I was lucky enough to go around Kyoto Imperial Palace – though usually closed to the public without prior appointment, the Imperial Household Agency opened up the palace for the Autumn viewing this week (30th Oct – 5th Nov). These viewings are infrequent (twice a year) so it was an opportunity not to be missed and was definitely worth seeing. The Imperial Palace or 京都御所 (Kyoto Gosho) is located in the Imperial Palace Park which happens to be right next to where I live. The park itself is beautiful, covering around 24 acres. Within it are two restricted areas – the Imperial Palace and the Omiya Palace (the palace for retired emperors and empress dowagers – today it is used as the official visiting residence when the Emperor visits Kyoto).

This post may end up being somewhat of a history lesson as it concerns Kyoto’s past as the Imperial capital, hopefully you’ll find it as interesting as I do, though if not there are loads of pictures below. While I’ve studied Japanese history before I find we looked at specific events without pulling together a continuous narrative – by looking at one building’s history you can get a good sense of Japanese history as a continuous timeline and really appreciate how old Kyoto actually is. I’ll talk about the history in between the pictures as it breaks up an otherwise daunting wall of text. Also the pictures give you a better idea of what I’m talking about.

The palace itself is beautiful with amazing gardens. I was given an English-language leaflet when I entered but it turns out that they have directly copied everything from the Wikipedia article on the palace – obviously  they’ve hired a lazy translator or they didn’t want to pay for one. The palace includes the buildings used for coronation ceremonies (only the current Emperor was crowned in Tokyo, the others were crowned in Kyoto) and the residences themselves. You can’t actually go inside any of the buildings but they have opened up the screens for the public to see. There are also beautiful stroll gardens that are worth the trip alone. 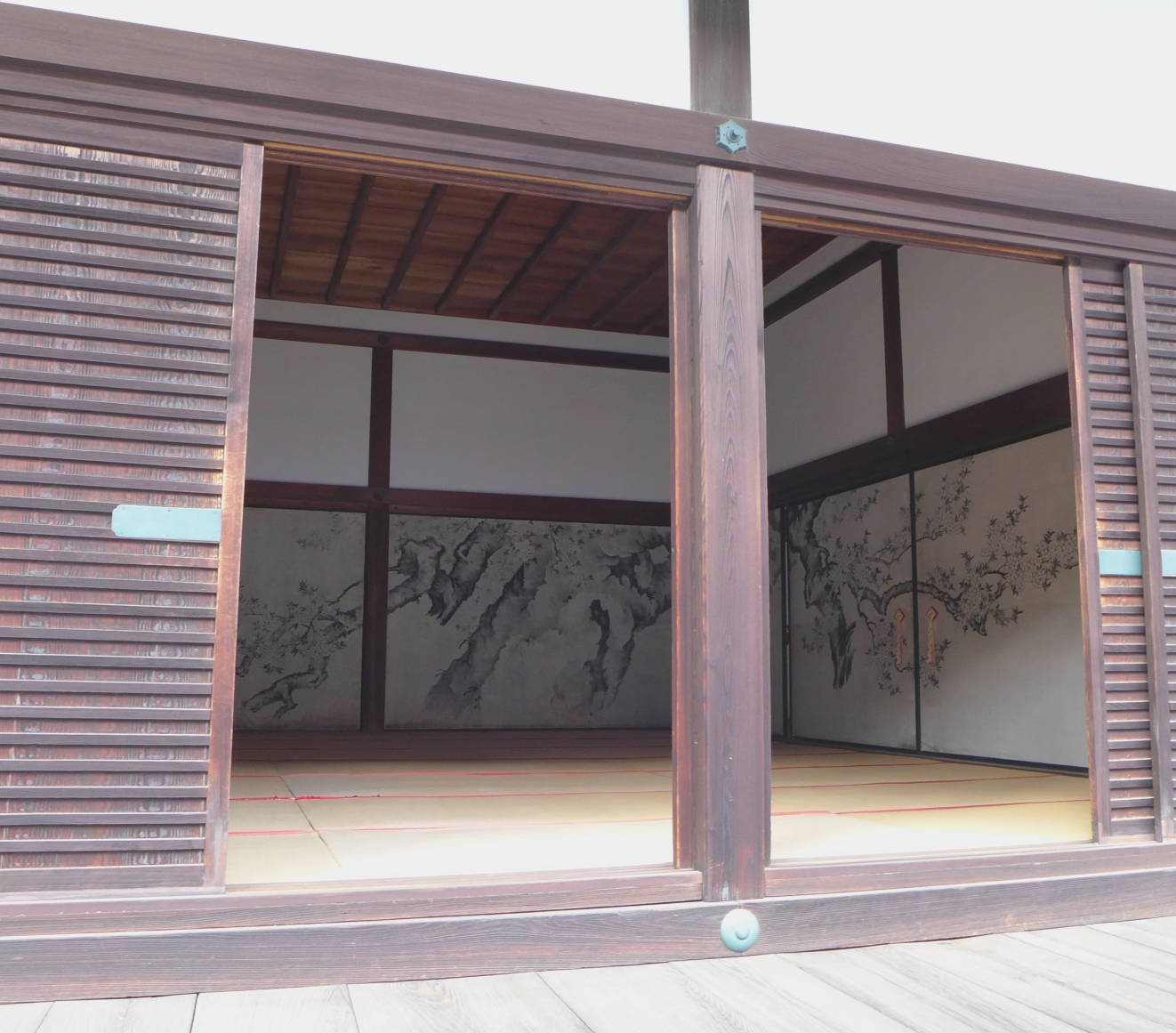 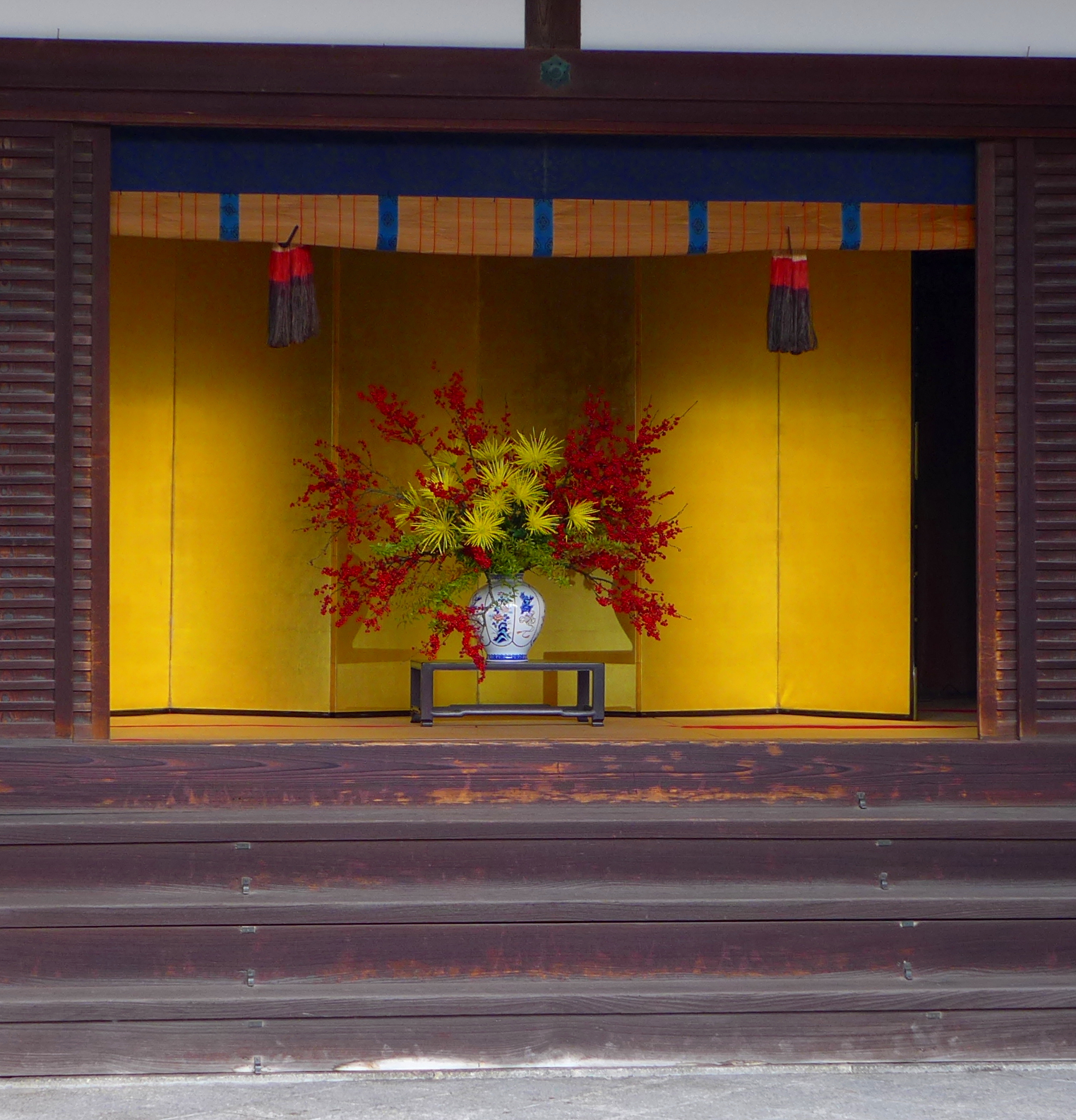 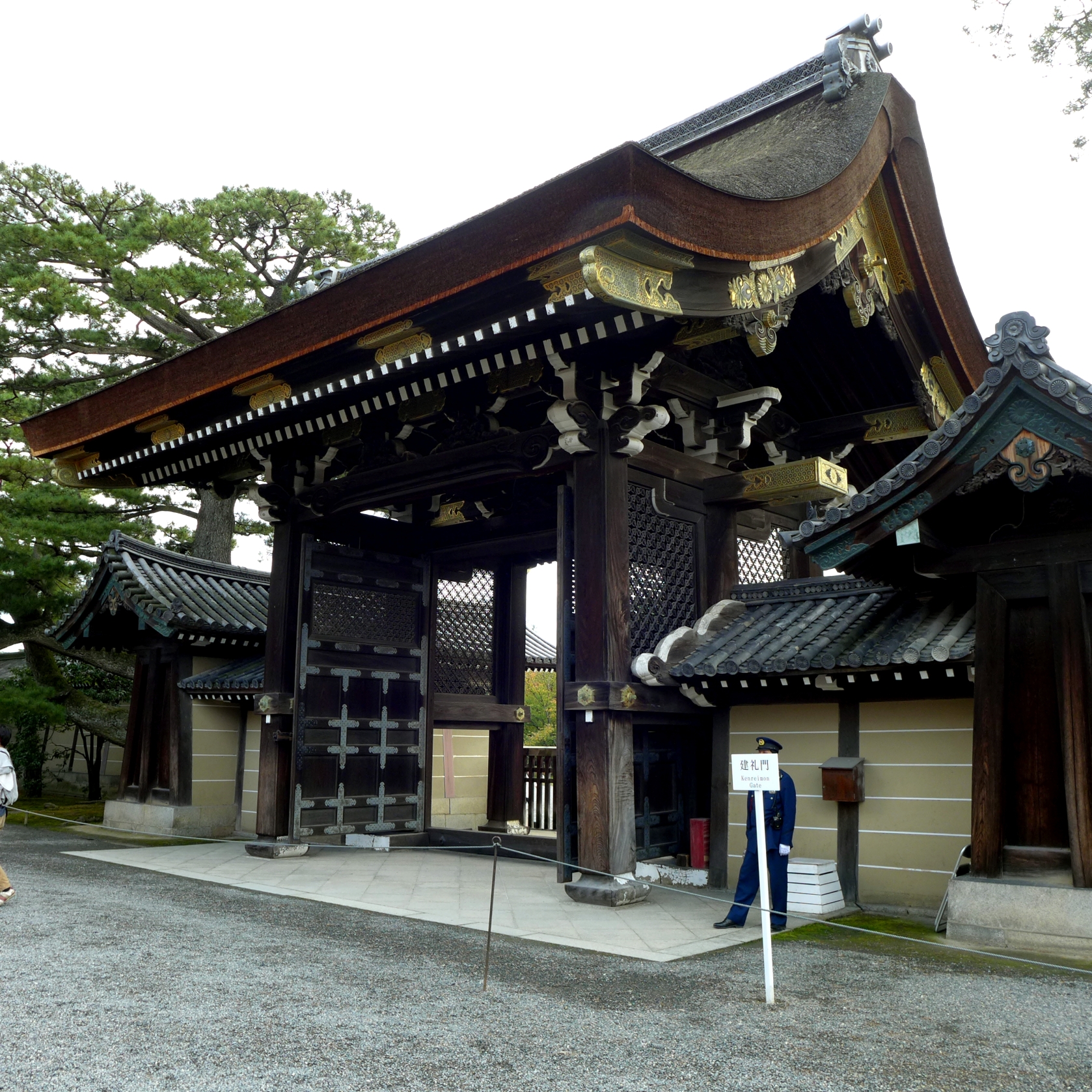 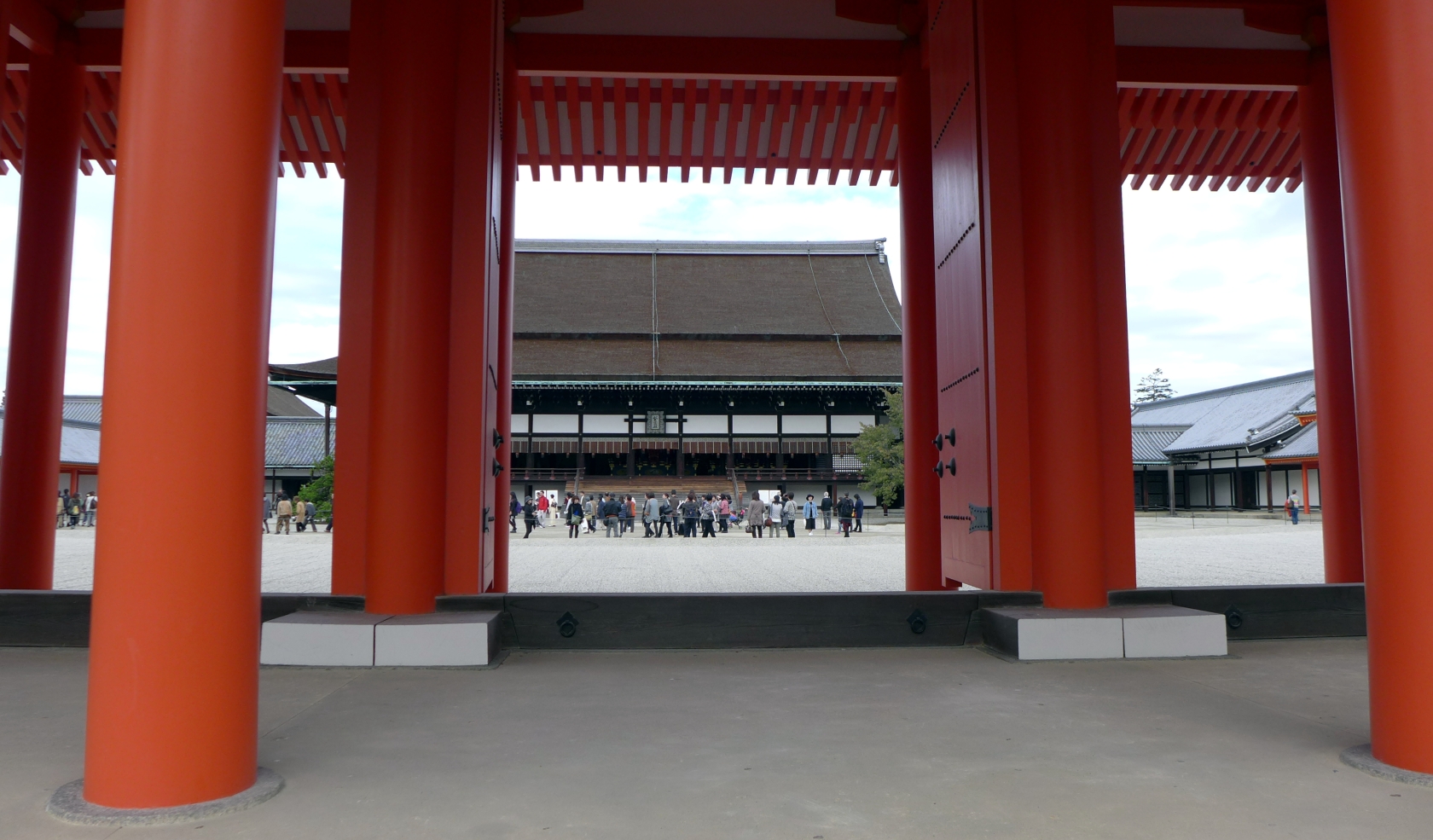 Along with the opening of the grounds, there were also various displays of flower arrangements and historical artifacts. The sedan chair used by the Empress to travel from Kyoto to Tokyo in 1868 was on display; it took her 20 days to get there and the chair was pretty small – I doubt she was in a good mood when she arrived. The flower arrangements were incredible. I knew that flower arranging or 生け花 (ikebana) was an art form in Japan but I never realised how beautiful it was. These aren’t just picking nice colours and putting flowers in a vase – the Japanese pay attention much more to the form of the flowers and creating an overall structure as well as the colour scheme, making it more like painting or drawing with flowers. 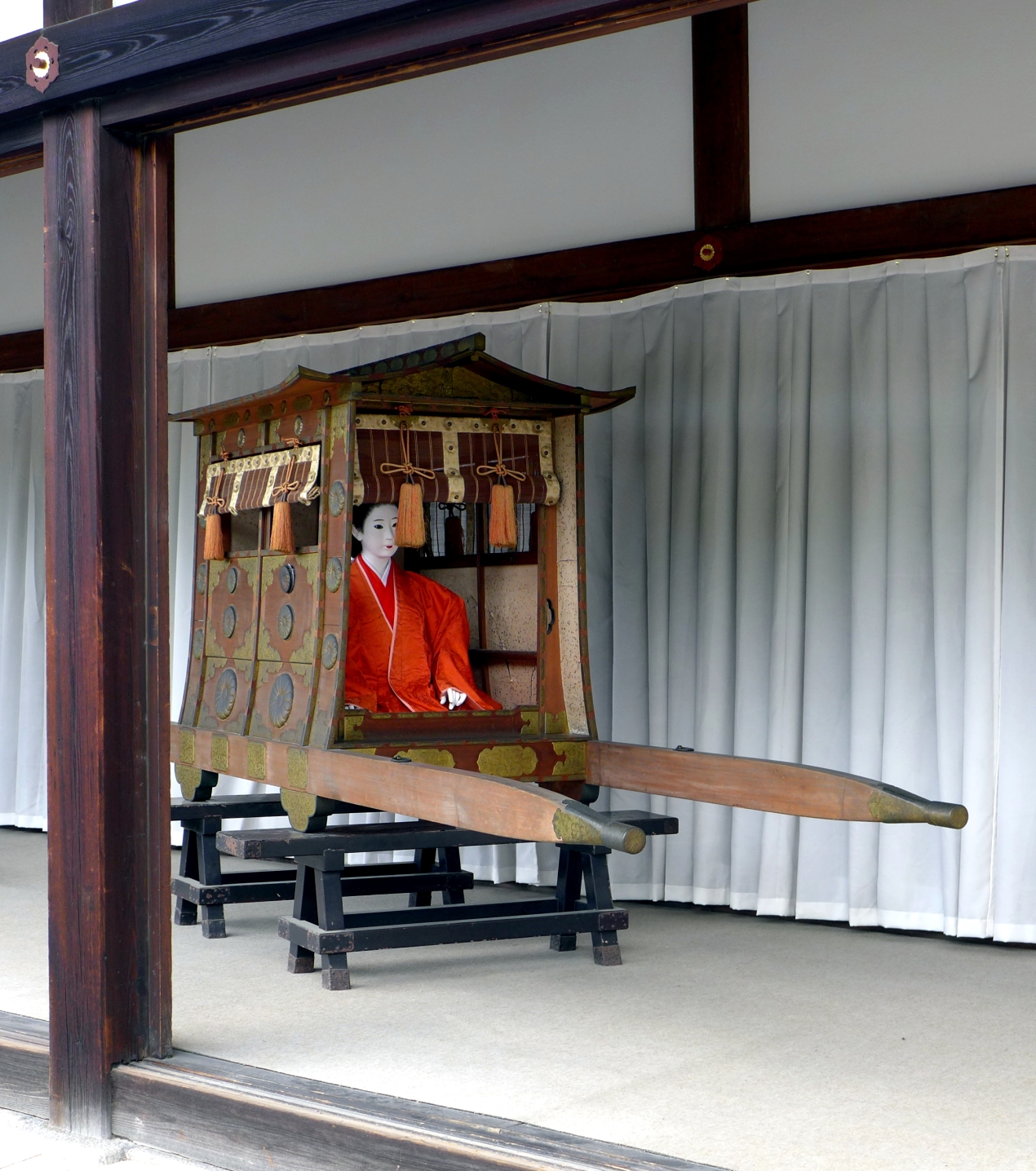 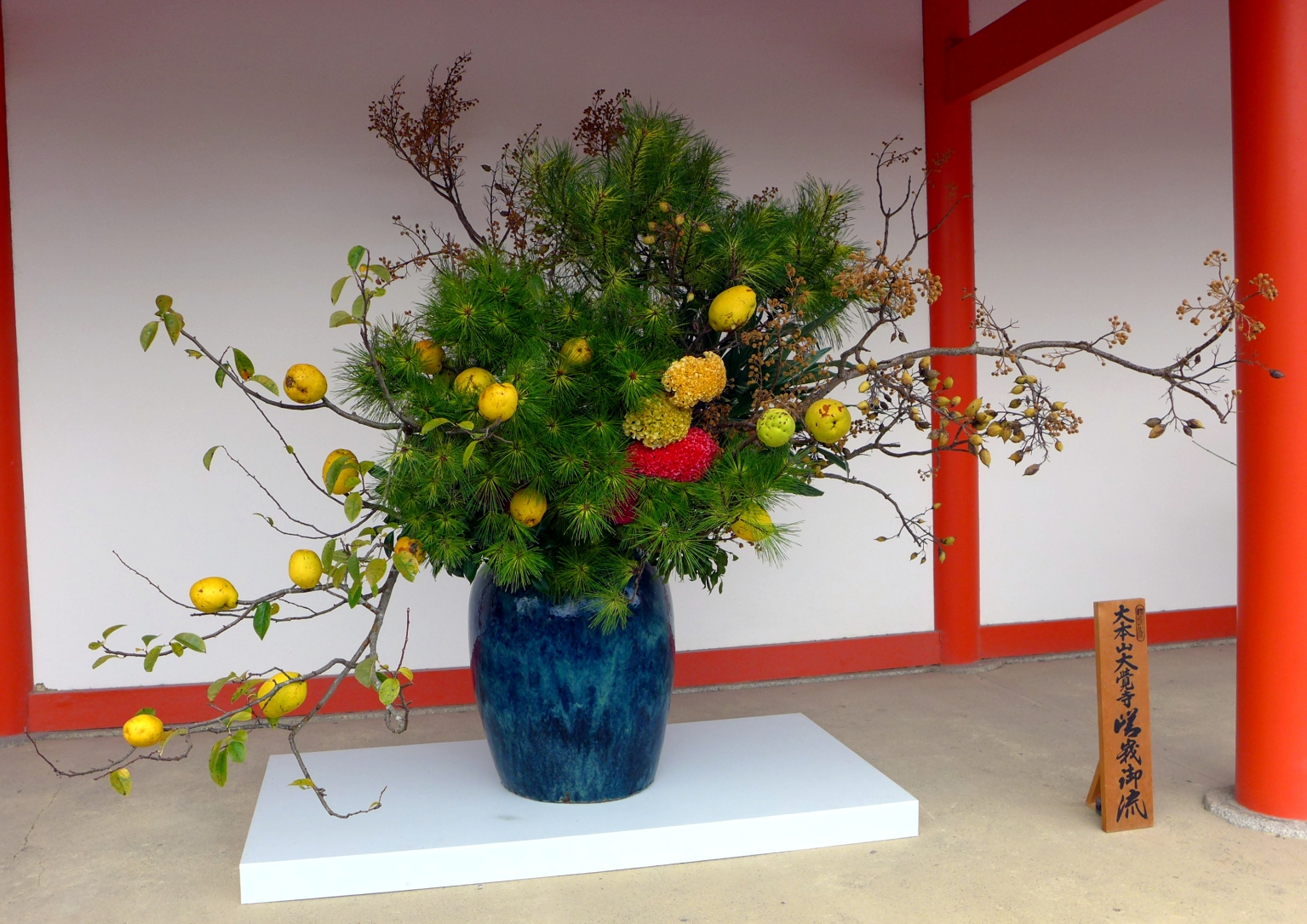 The Kyoto Imperial Palace is not the original building that was constructed in 794 – Japan has always suffered from fires and natural disasters and it burned down 6 times in the Edo period alone (a period spanning around 250 years). However, the palace has been faithfully reconstructed time and time again in the Heian architecture style (Heian period: 794 – 1185). Originally the palace was a ‘secondary residence’ of the Emperor but became used more and more frequently until it became the official Imperial residence in 1331 with the coronation of  Emperor Kogen. The palace was therefore the primary residence of the Emperor and the Imperial Court for 537 years.

The stroll gardens were also fantastic. A bit like the flower arranging the focus is on form and ‘nature’. I say nature in quotes because every tree and bush has been pruned to perfection, giving the impression of a garden that has grown exactly as it is meant to, as if all the trees and plants know the same rules and are following them. The bridges seemed to blend in with the nature, not standing out as man-made or out-of-place – the creation of a natural garden has also been taken to artistic levels. 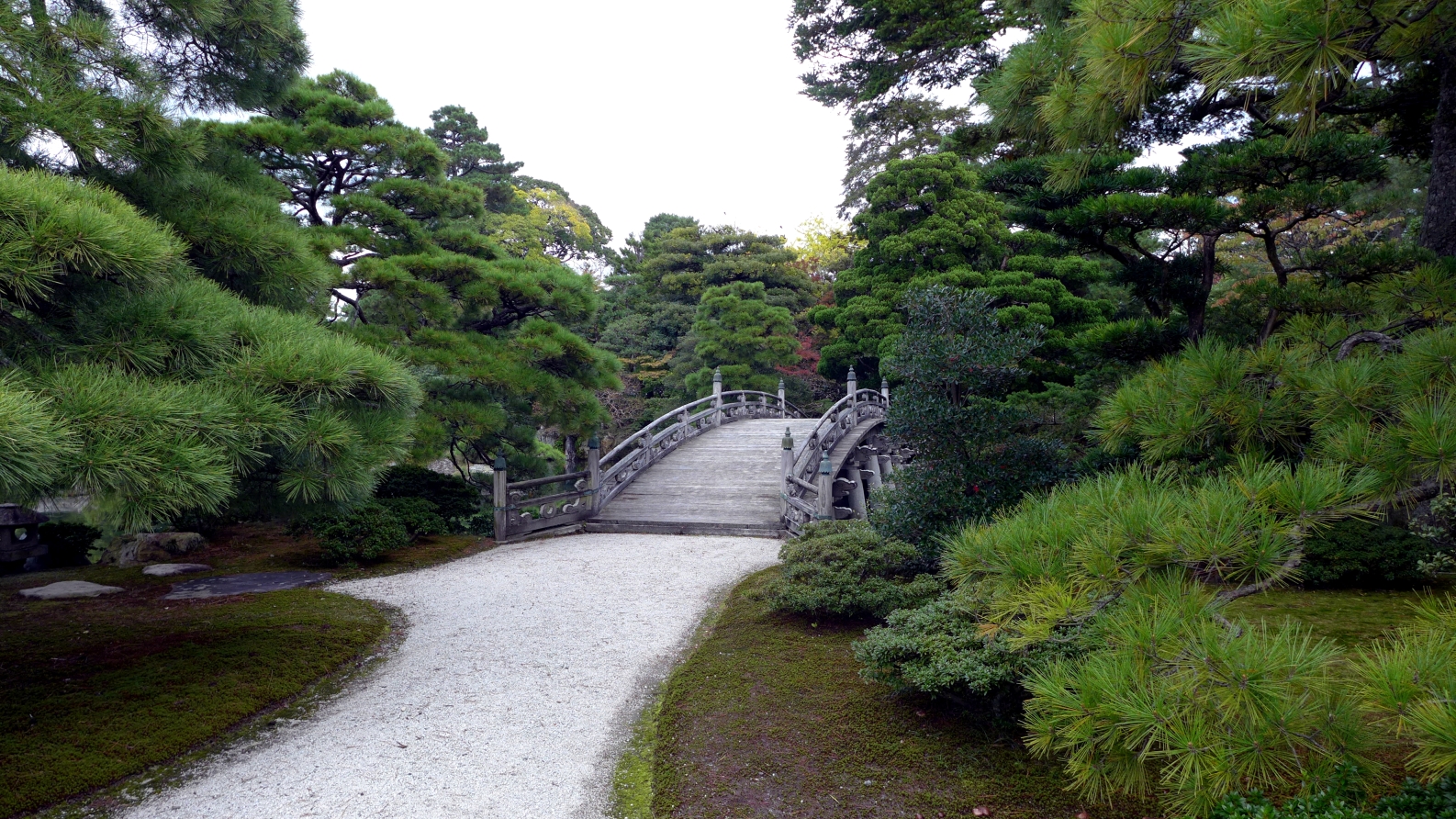 The architecture itself was impressive – hundreds of wooden supports underneath the roofs made them seem as if they were sitting on nests. The pattern of sliding doors and screens that went into the palace in layers showed how everything could be opened up or sectioned off to allow privacy. The screens themselves were beautiful and some appeared to be decorated with gold leaf. The Imperial Household Agency had also put up a number of figures wearing the clothes of the time to show what people would be wearing as they lived in the palace. 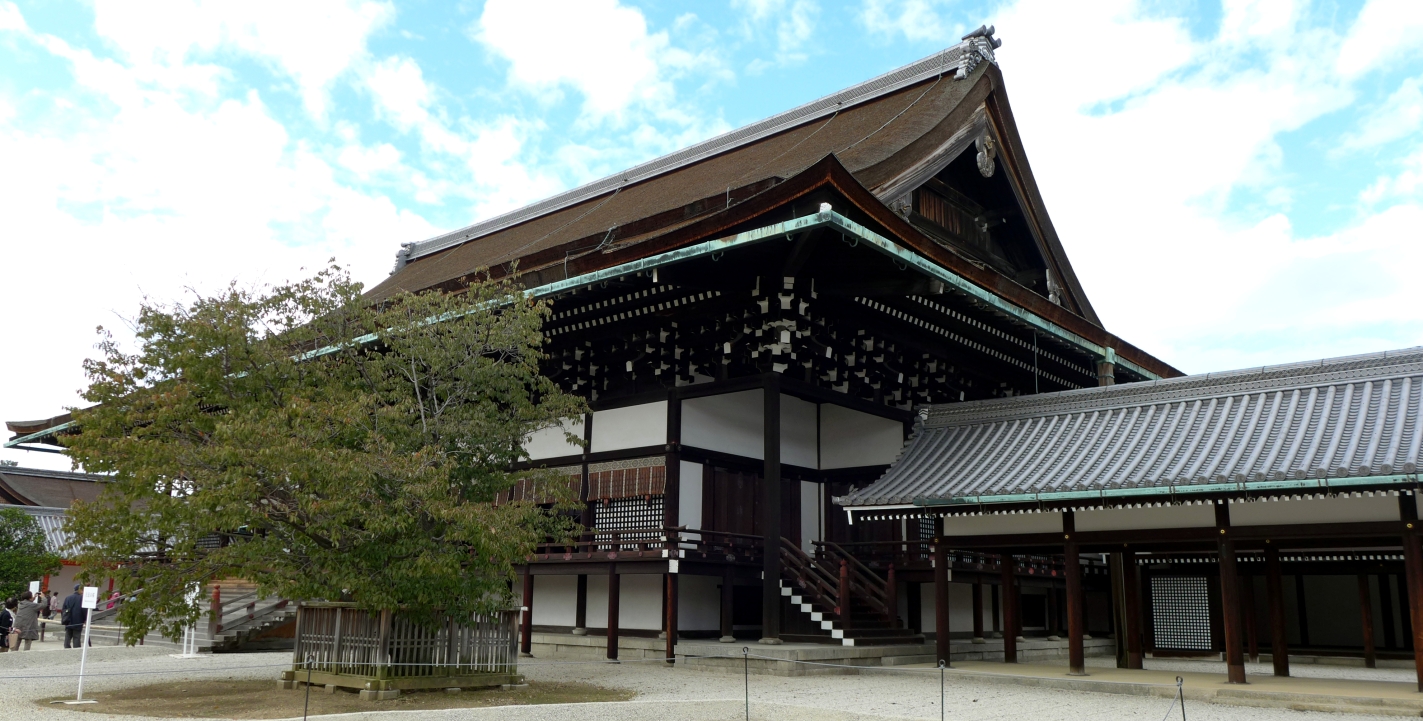 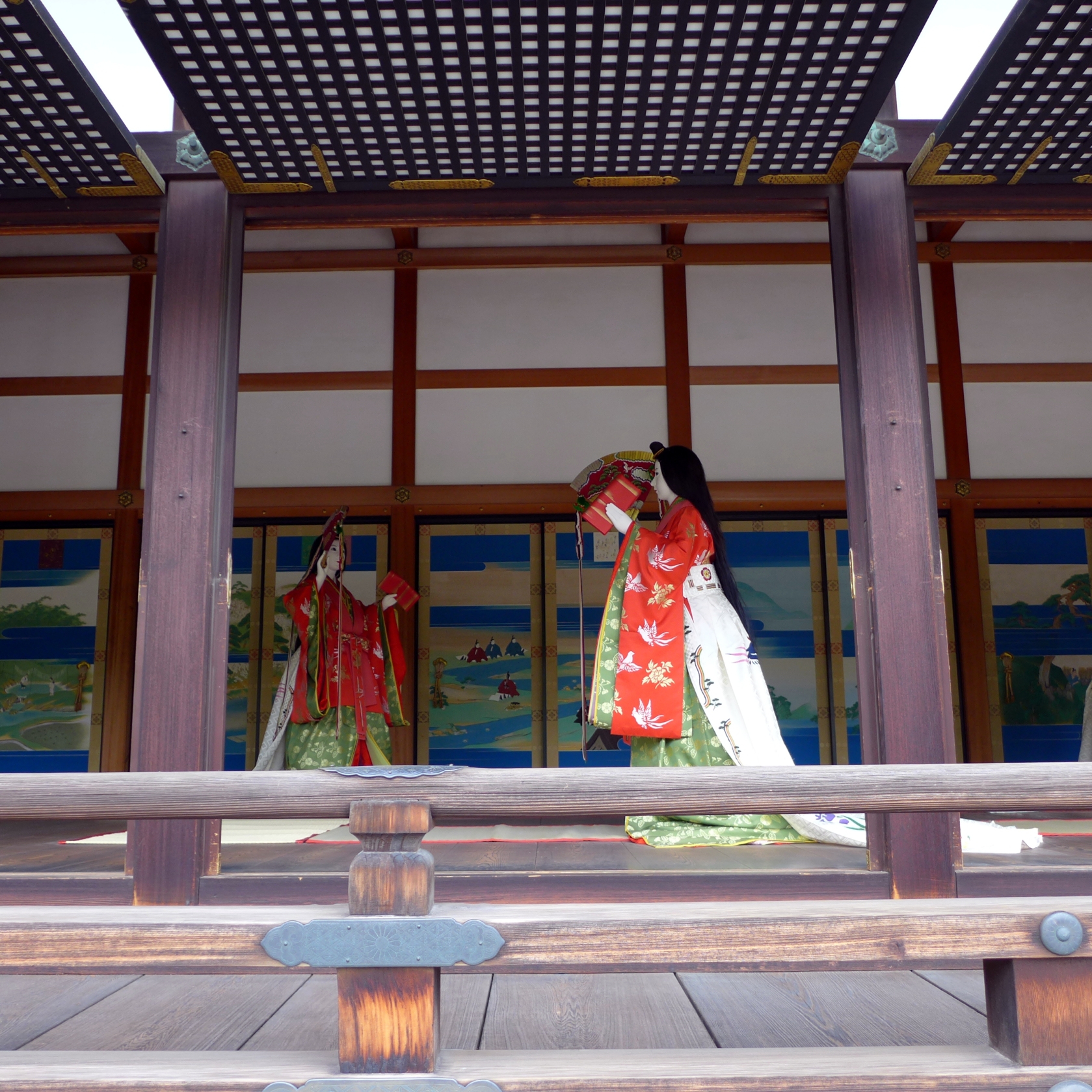 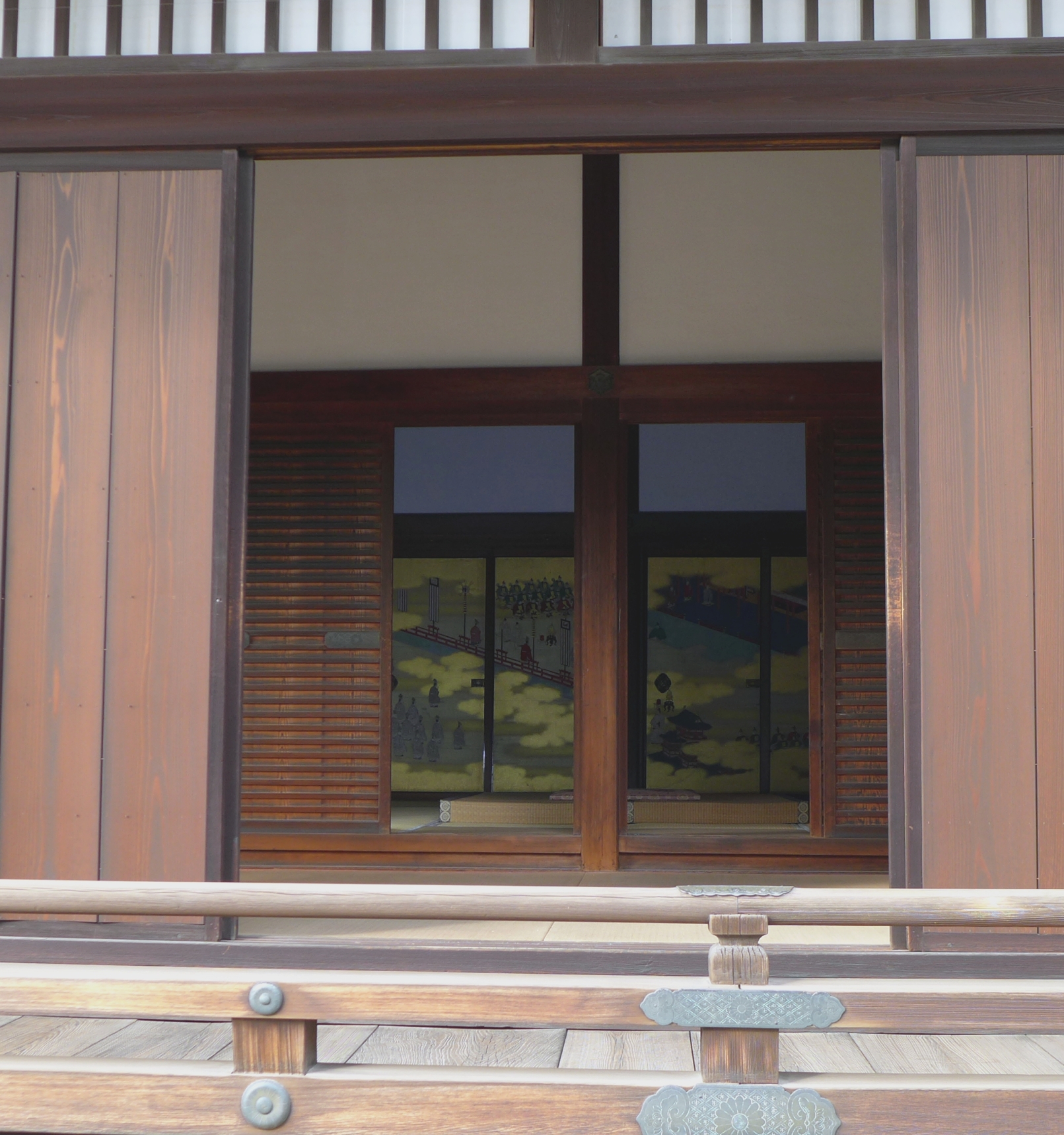 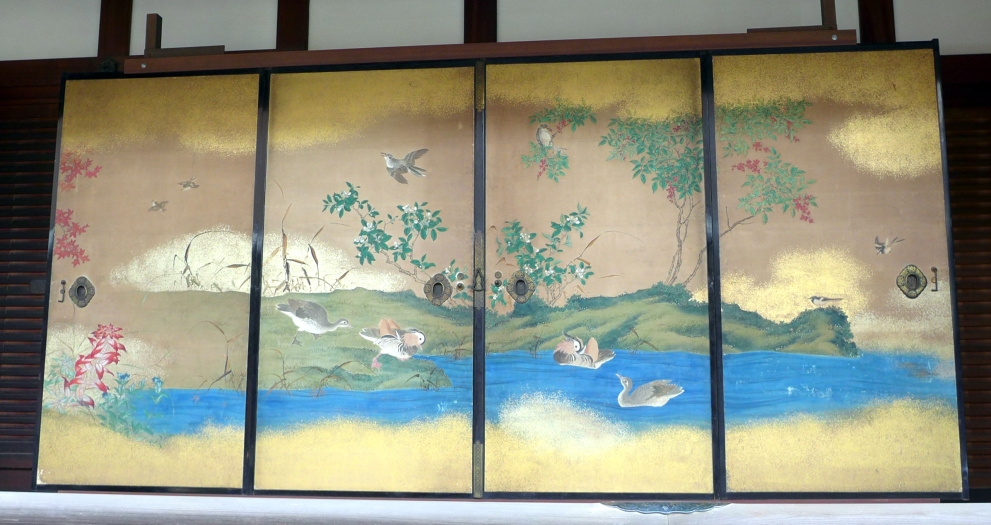 Sadly I missed the opportunity to watch the ancient game of Kemari – basically a game of keep-me-up with a deerskin ball. Japanese nobles would try to keep the ball in the air for as long as possible using their feet, head, hands etc. The game was non-competitive but I can imagine it got pretty heated. They would play wearing traditional court clothes of the era – think large kimonos with long sleeves, hardly ideal sports attire.

My visit to the palace was actually pretty short – it took me about an hour to go round everything thoroughly. Despite it being quite a short tour I would strongly recommend it. Even if you are visiting Kyoto when the palace is shut you can book a free tour with the Imperial Household Agency – you just have to do it a few days in advance and you can book online in English.