Today it barely rained at all, only drizzling a little at lunchtime; clearly the ice cream worked and chased the rain away. I took advantage of the clear and crisp afternoon by visiting Shimogamo shrine (下賀茂神社) which is only a 15 minute walk away from my accommodation. This is one of Kyoto’s 17 world heritage sites – I would like to visit them all while I’m here so I figured I should get started. There are actually two shrines as part of the complex but the upper shrine, Kamigamo Shrine (上賀茂神社) is a lot further up river and apparently covered in scaffolding until next year, so I visited the closer lower shrine. Shimogamo shrine dates back to the 6th century, in the Asakusa period, a long time before Kyoto became the capital of Japan in 784.

The shrine is surrounded by an old forest called Tadasu no Mori (糺の森), a beautiful place that makes you feel like you aren’t in a city at all despite being meters away from normal Kyoto suburbia. I walked to the forest from my accommodation, passing by the Kamo river (鴨川) and the Takano river (高野川) – the two rivers join just below the shrine. The shrines were constructed in part because the Kamo river flows from the North East – the direction that is known as a Kimon (鬼門) or ‘devil’s gate’ through which spirits and demons can pass; the shrine was constructed to prevent them from travelling down the river into the city. 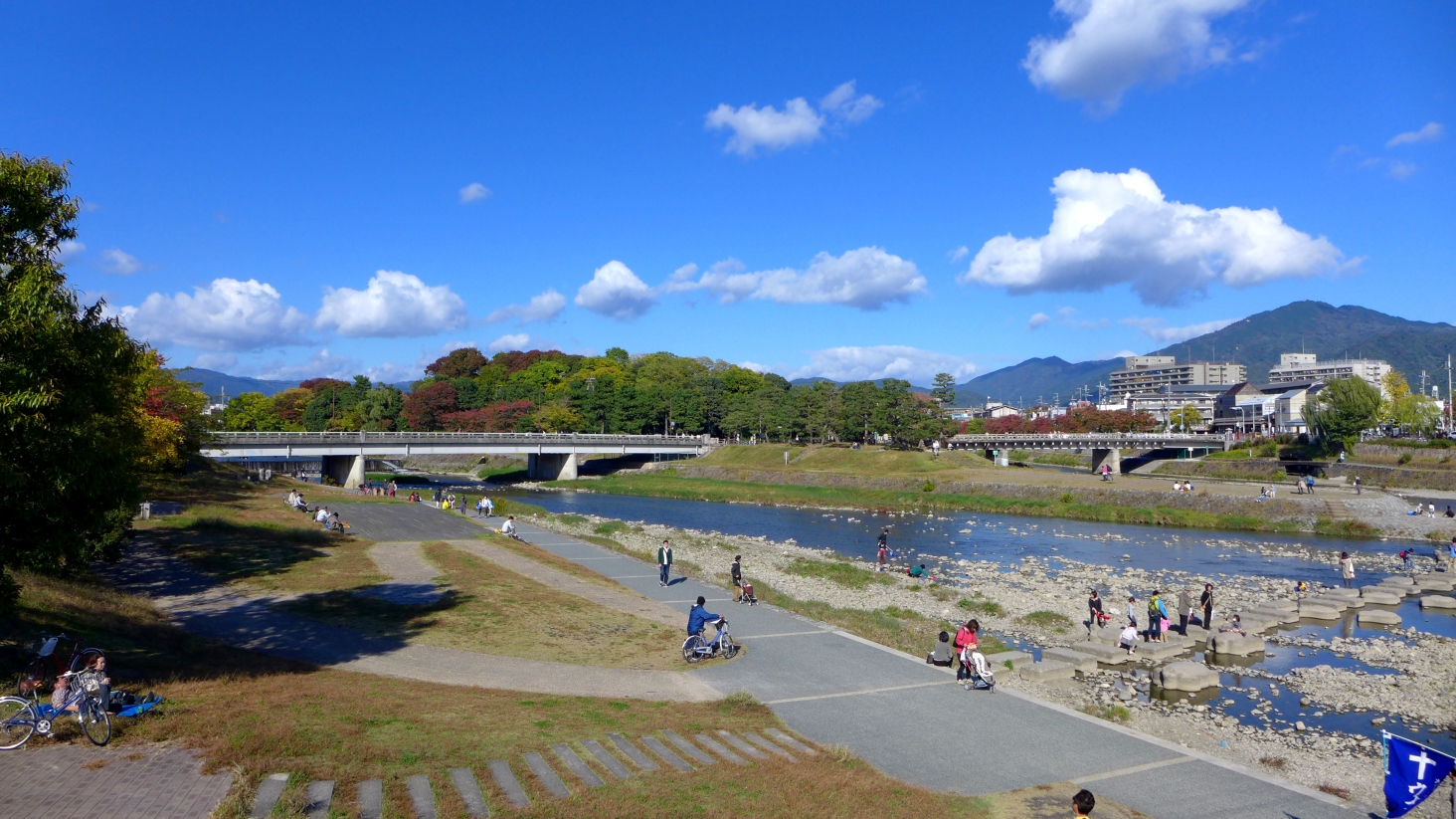 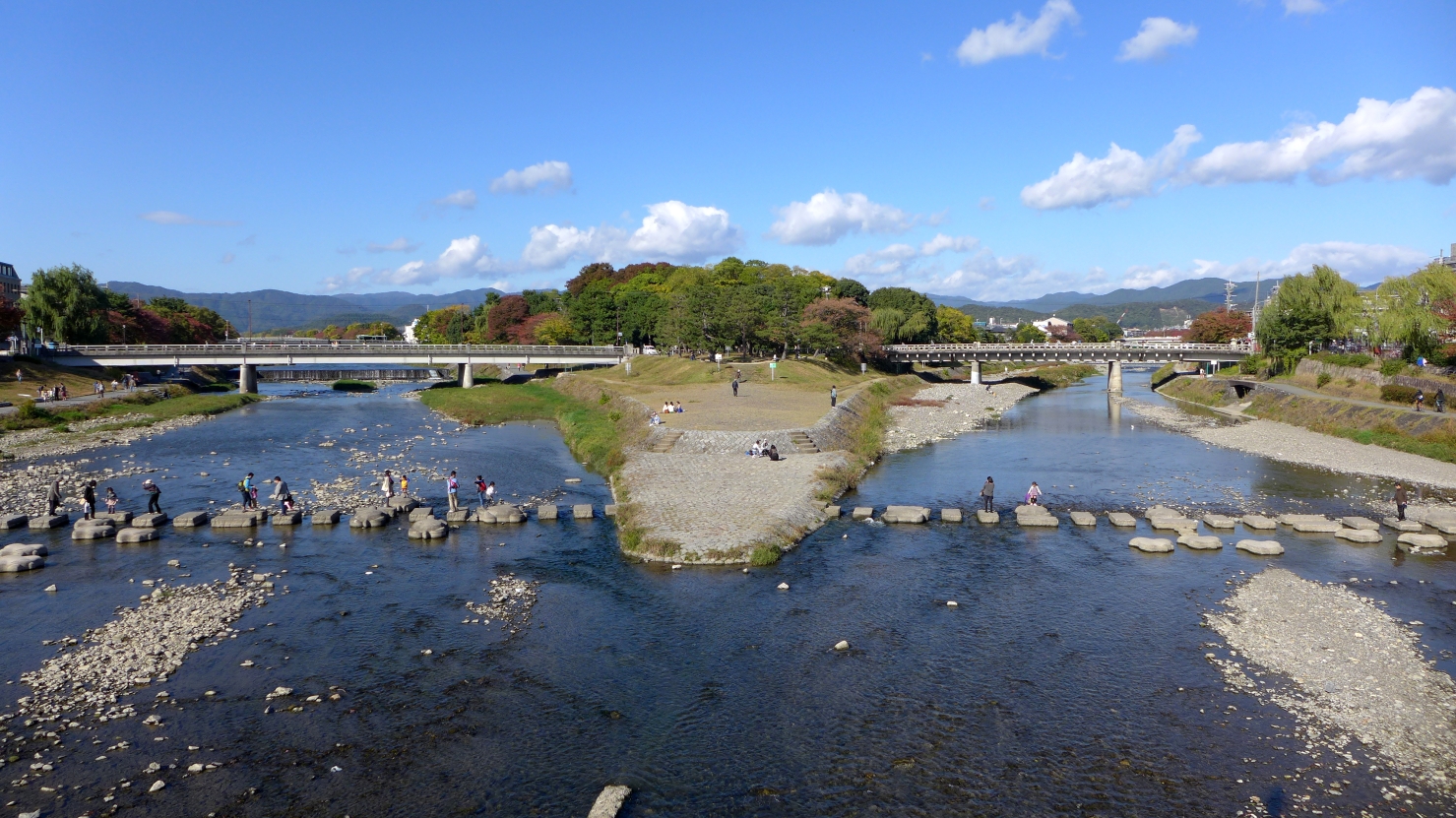 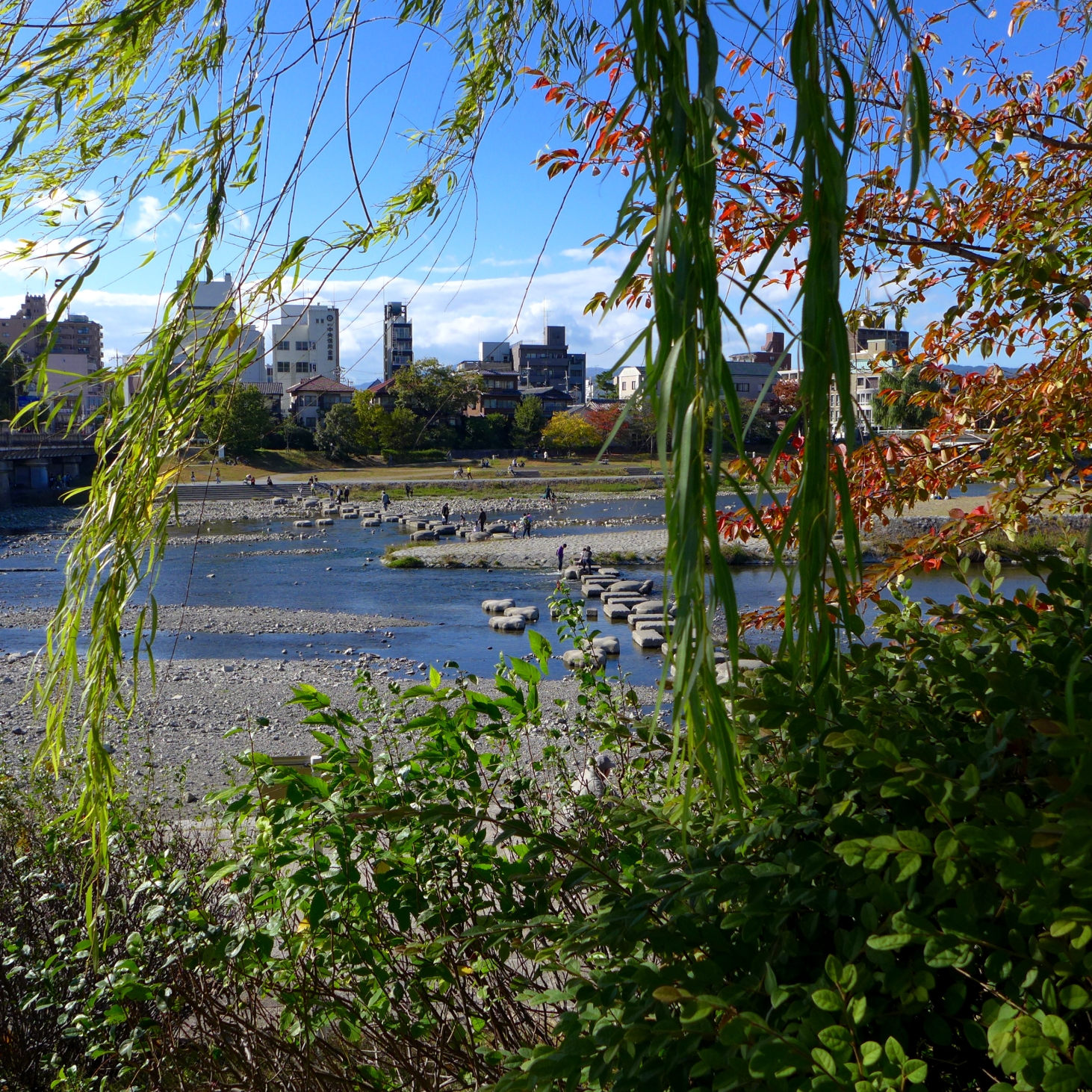 Today is a public holiday in Japan (unless you go to my university and then you have class anyway) – it is the Culture Day. I’m not entirely sure what this is supposed to entail but the primary school next door to me seems to think it involves talking on a megaphone all day. This is part of the reason why I visited the shrine. Due to it being a public holiday the shrine and the river were fairly busy but not to the extent where it was unpleasant.

I walked through the forest to the small shrine at the bottom of the complex, spotting a tanuki statue under the trees. Japanese statues always make them look terrified or in pain, though apparently they’re quite cute in real life. The big stone sign marks the start of Tadasu no Mori (the forest). 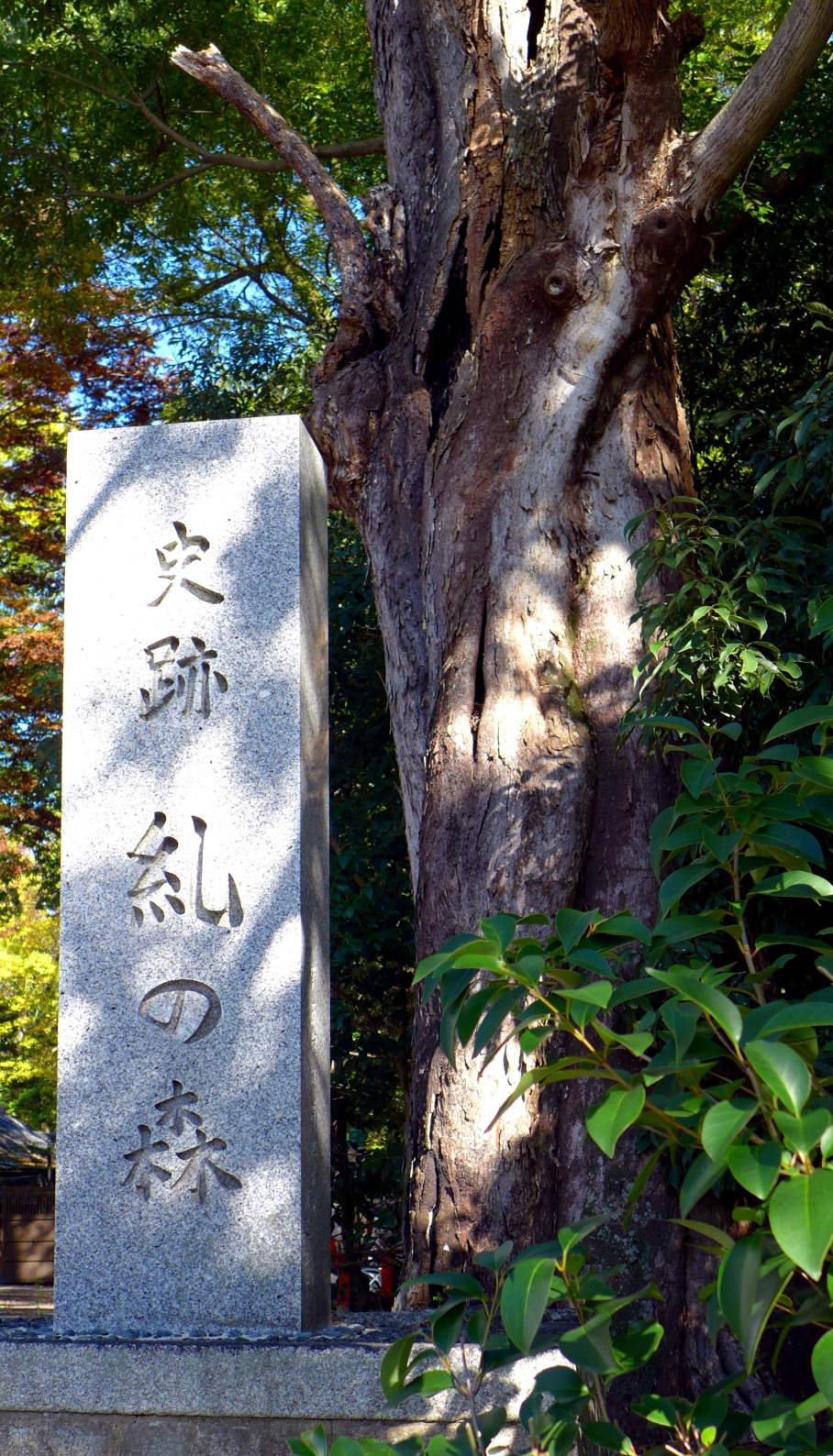 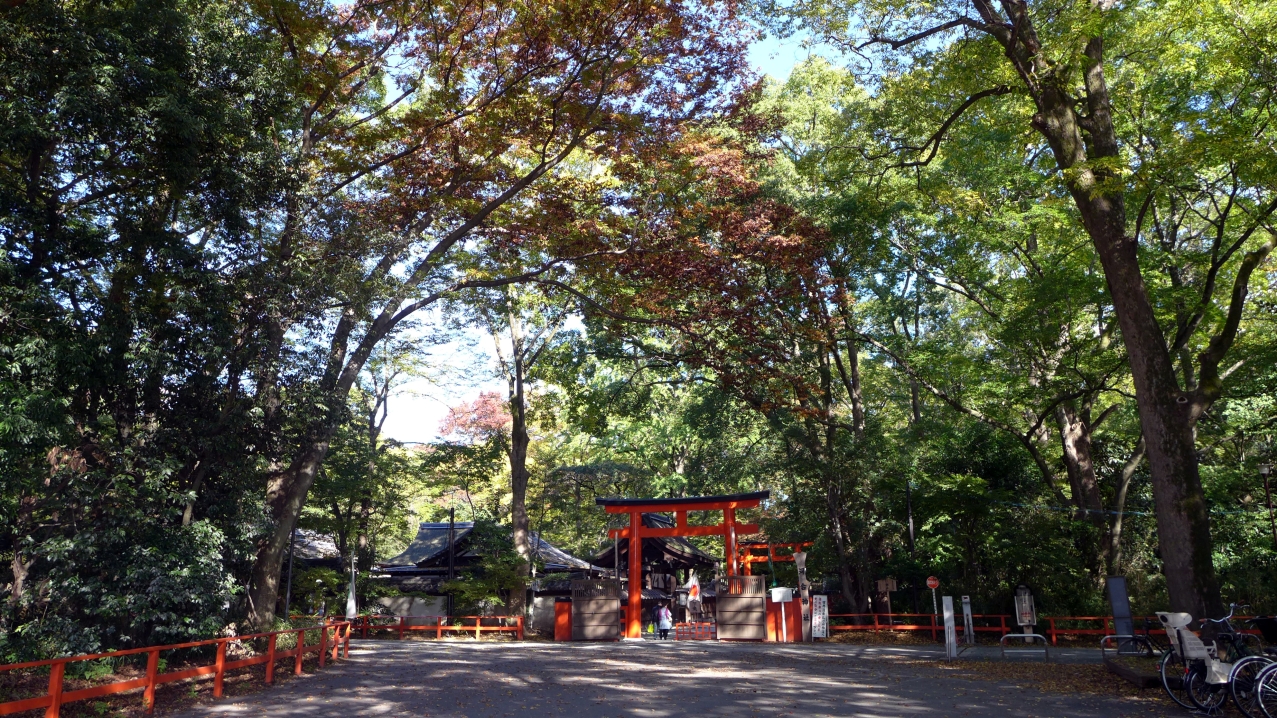 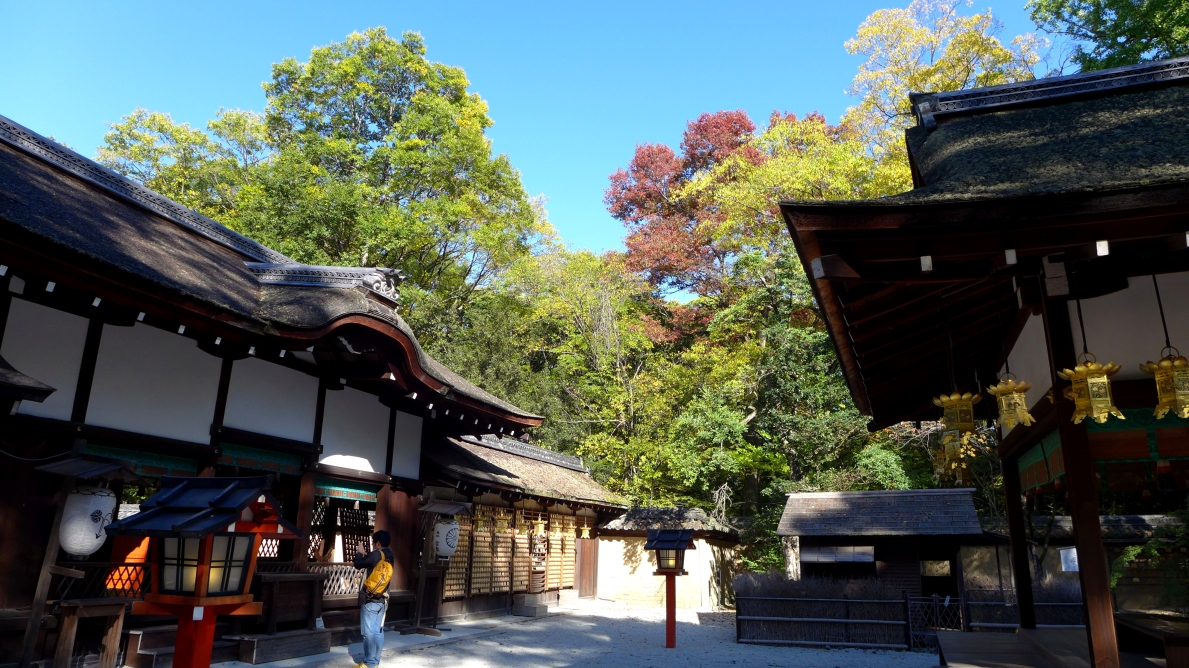 The smaller shrine is Kawai Shrine (河合神社) which people go to to pray for easy delivery in childbirth, matchmaking and their children’s development. They have mirror shaped prayer tablets which women write on to pray for beauty. There were quite a few women writing on them when I was there – quite a time-consuming part of a beauty regimen. The shrine is a courtyard enclosed by walls on all sides with the alter for praying on one side of the square. It’s relatively small and typical of a shrine aside from the mirror practice, though it was much more empty than the busy main shrine – good for a bit of peace.

The way up to the main shrine is a wide gravel path lined by trees. The sun was shining through creating a towering green tunnel, shutting out any evidence that I wasn’t walking somewhere in the middle of the countryside. There were two very old trees on the way, though their status as living trees is questionable – the first was propped up but still showing signs of life but the second was basically three stumps. The trees bore the shrine markings of white paper lightning bolts hanging from a rope – clearly these trees are sacred whether alive or dead. 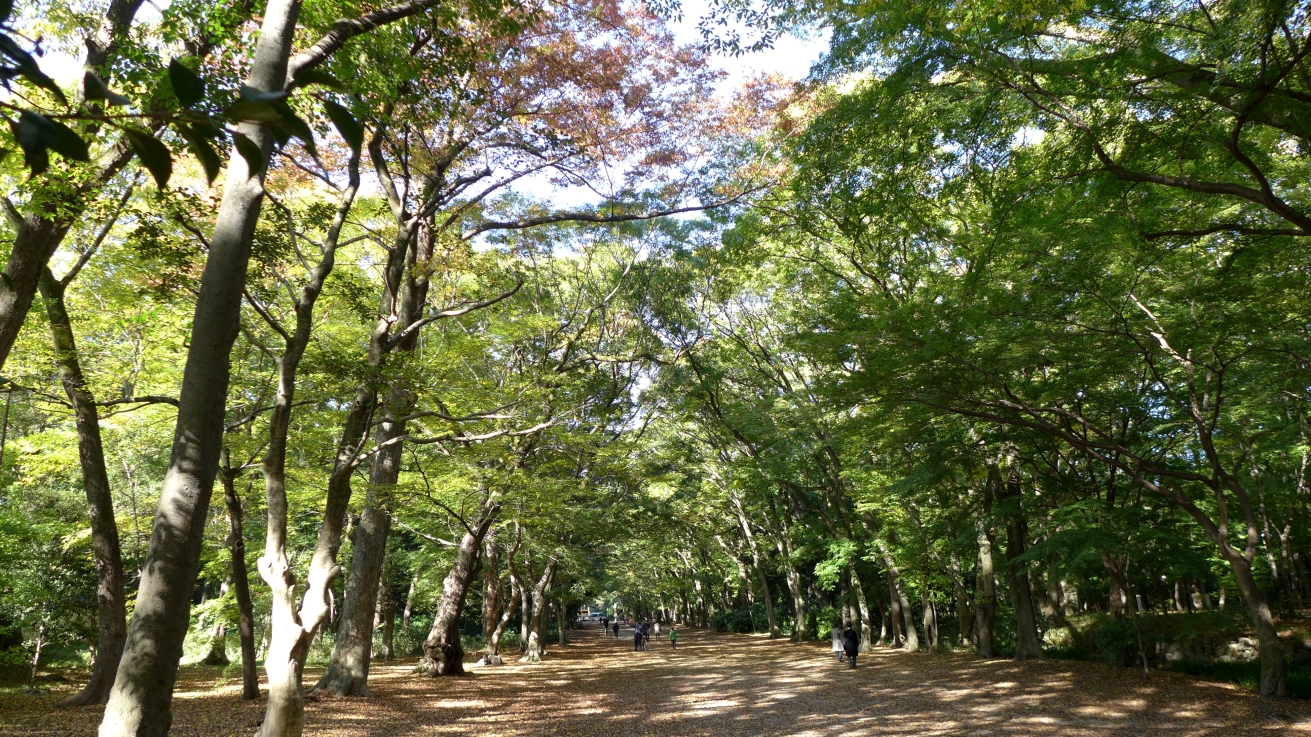 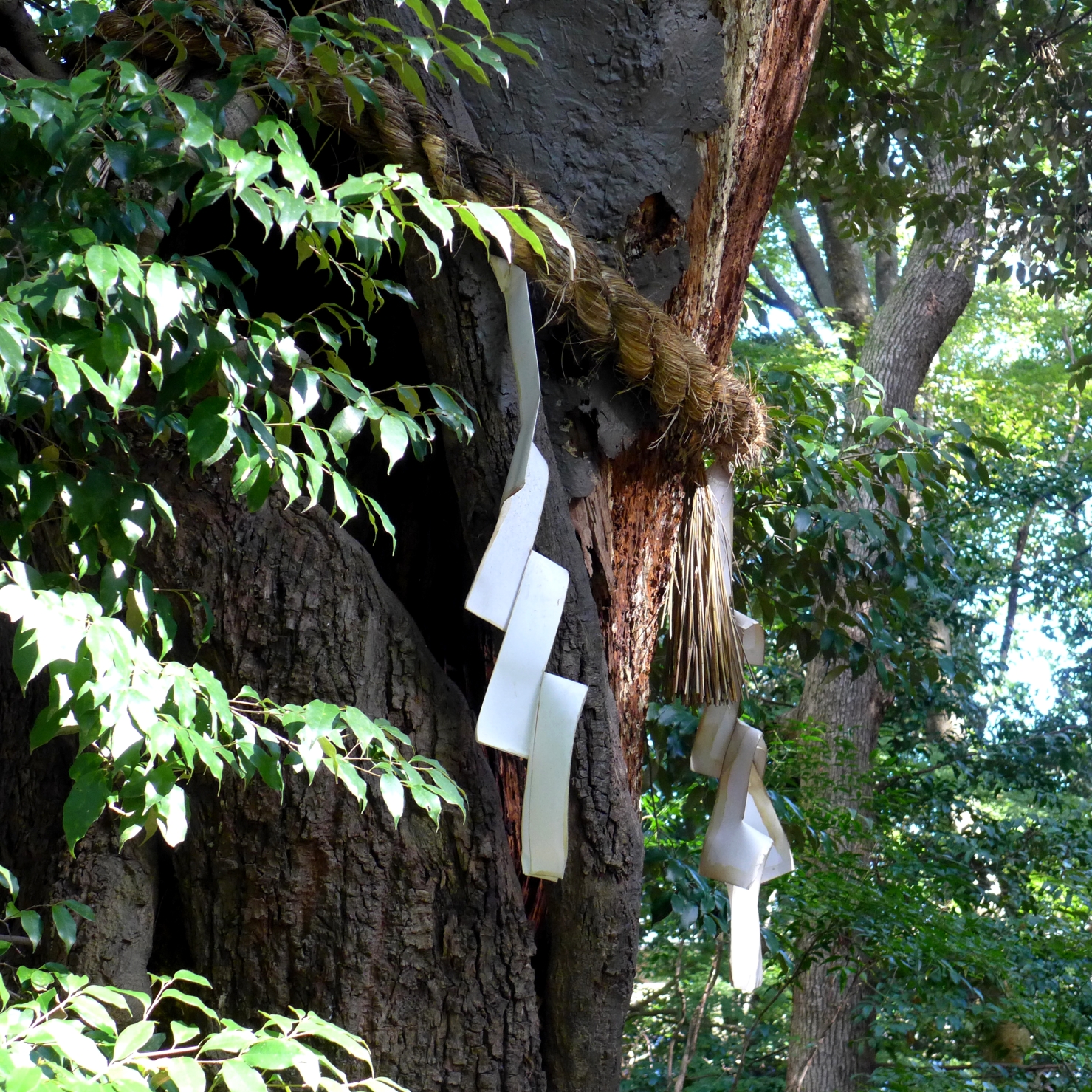 When I reached the shrine I realised that something unusual was going on. There were men handing out leaflets (not to me, I look like I can’t read Japanese and rejoice in the fact – I don’t end up with handfuls of useless leaflets) and a big basket full of white stones. People appeared to be registering for something. I was curious but, lacking a leaflet, I was unable to find any information at that point.

There was also a rather important looking rock with the usual shrine markings. The sign next to it said that it represented rocks gathering more over time and growing larger. Indeed it does look like its made up of an amalgamation of smaller rocks. This is probably an important lesson in perseverance, though it could also be interpreted as waiting for things to come to you as rocks can’t actually move. Either way, it looked important.

There were also a load of barrels of sake, though they are not actually full of drink – they are display barrels. Sake, or o-miki（お神酒 is the word used when its part of a religious ceremony only), is an important part of Shinto ceremonies and the national breweries of Japan donate sake for the festivals. The display of barrels is part of the donation – the shrines only accept as much sake as they actually need for the festival to avoid waste, so they also accept empty barrels as part of a gesture. This is a good article on the topic if you’re interested. 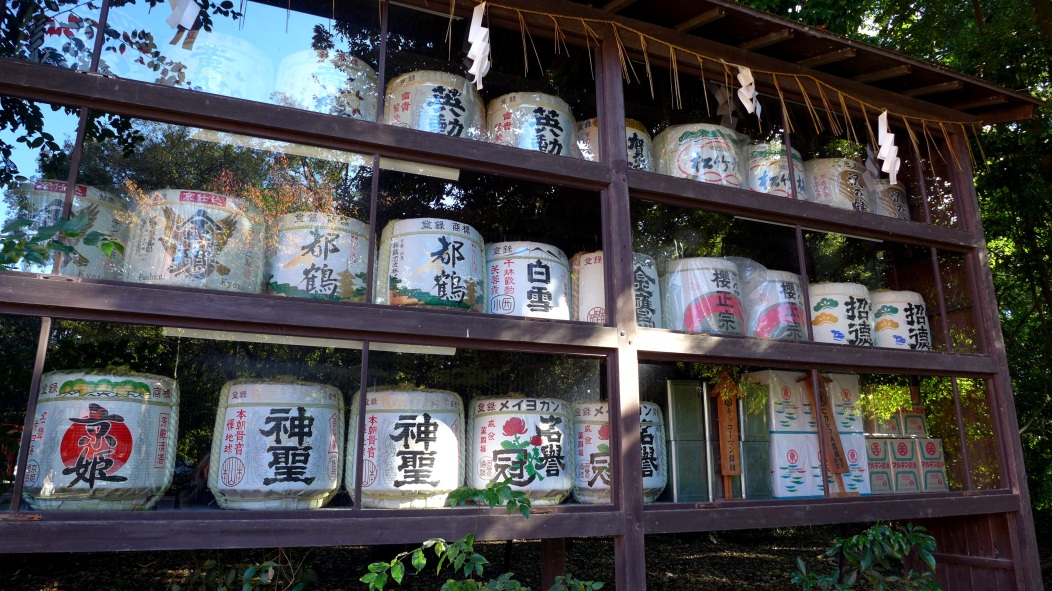 The shrine itself was impressive and beautiful, as one would expect from a World Heritage Site. The luck fortunes or o-mikuji (おみくじ) which people tie onto ropes in the shrine if they get bad luck (the logic being the bad luck gets stuck and can’t follow you out) were coloured, which is something I haven’t seen before. The small decorative bridge was also beautiful. There were more of those mysterious white stones. 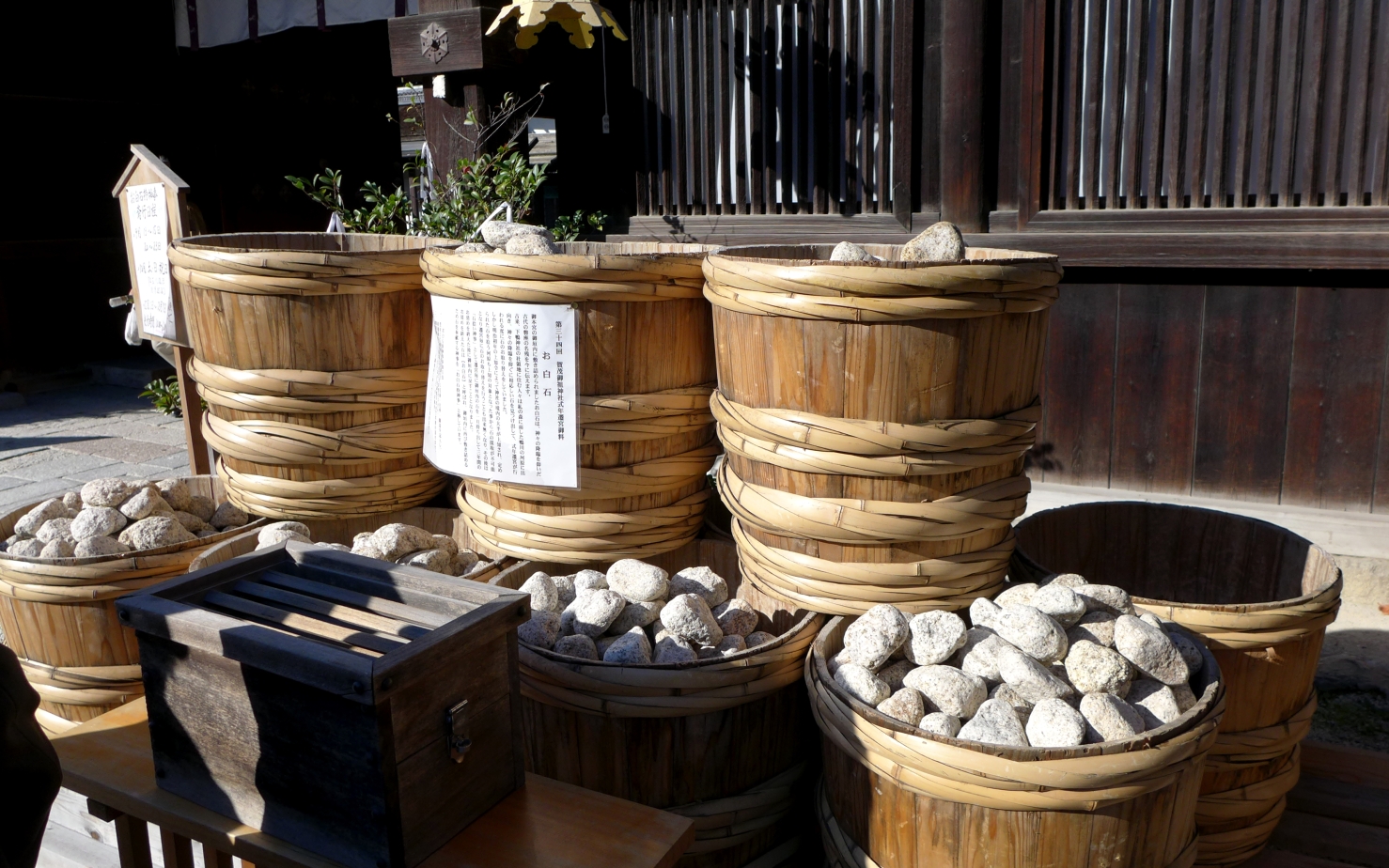 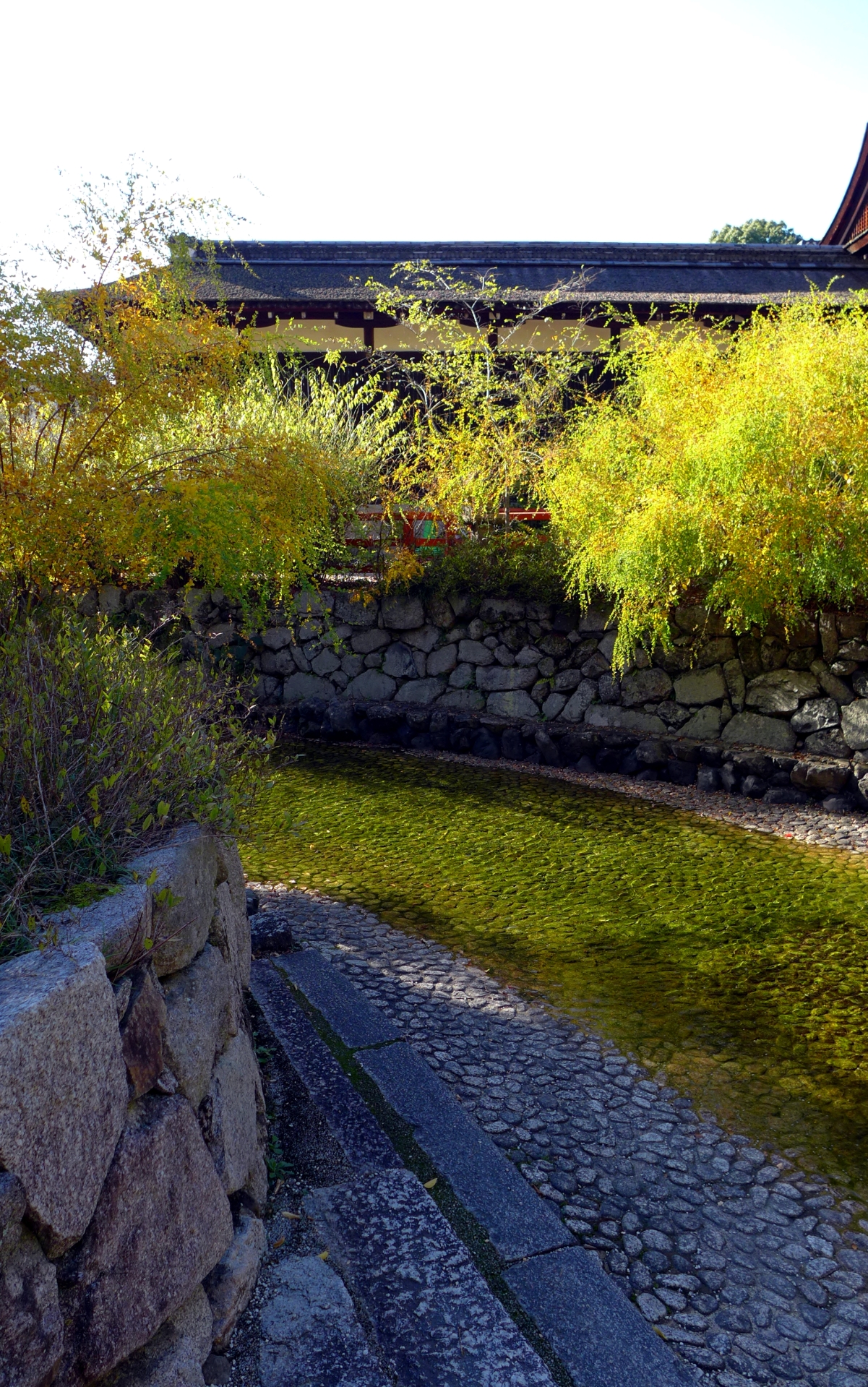 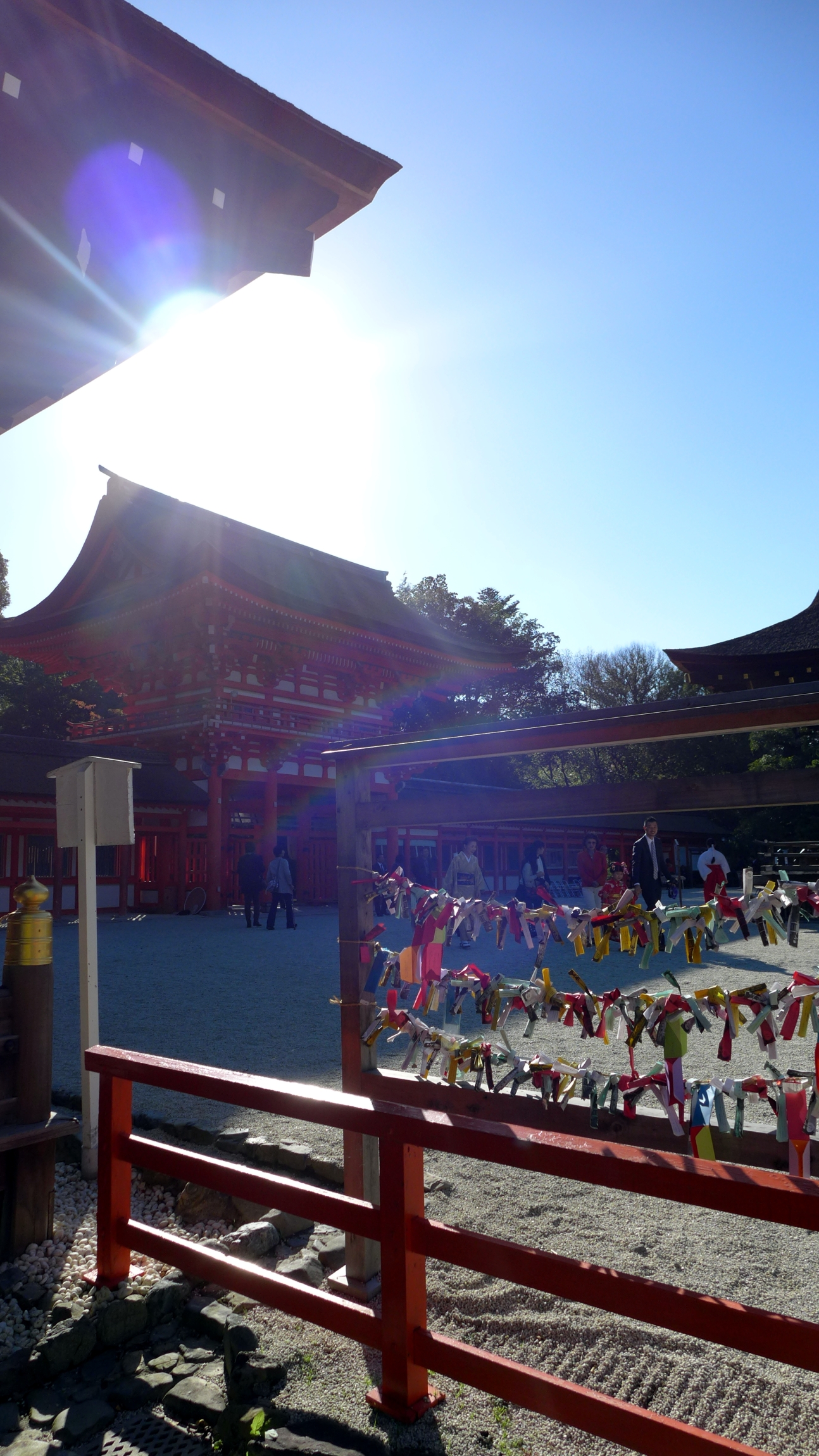 While I was there I bought a shuuin-cho (朱印帳) which is a temple stamp book. Each temple has a seal which they will write into the book for you if you pay a small fee (usually around 300円 – 500円 which is around £2 – £3). With these books you can go on pilgrimages or just collect the stamps of the temples you have been to – a great way to remember the ones you’ve visited and a work of art in their own right. My book was 900円 (£5) and came with the temple stamp in it (book prices vary from temple to temple, as does the design on the front). I bought the stamp of Kawai shrine (the one I visited earlier) on the way back for 300円. 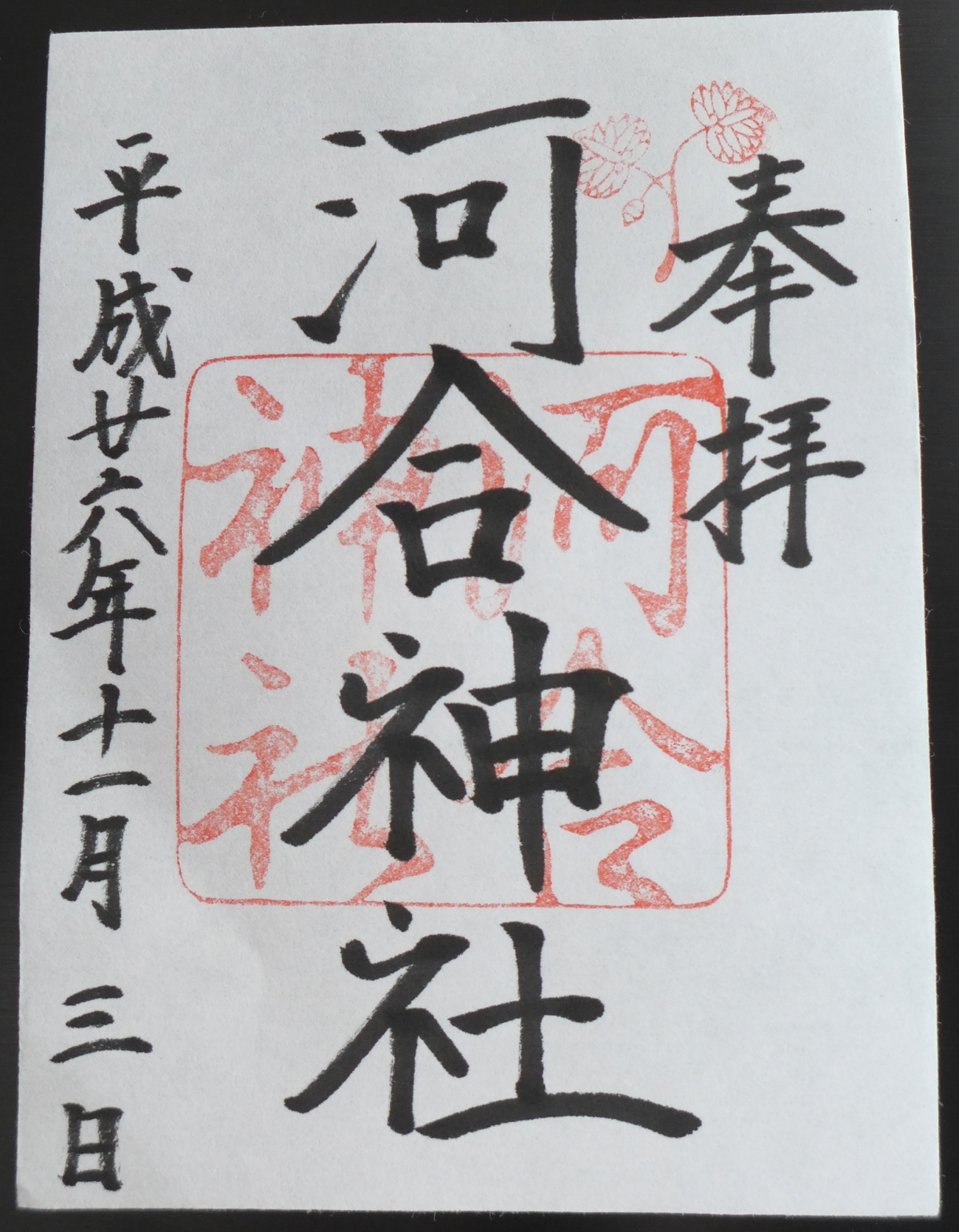 The Japanese do not mind foreigners buying the stamp book or getting the stamps, but they do not allow photos to be taken when they are writing in the book (unless you get  permission first!). They also object to using a non stamp book for filling in the stamps such as a notebook or travel diary, so if you decide to do this make sure you buy a proper book. The book is arranged in the same way as a Japanese screen, meaning that it folds out for display once it is full (it takes around 60 stamps).

I walked back through the forest and saw a horse pulling a group of people on a cart quite close to the shrine – perhaps it is possible to get a ride around, though it could be a special shrine-related activity. As I am very allergic to horses I don’t have the curiosity to find out. 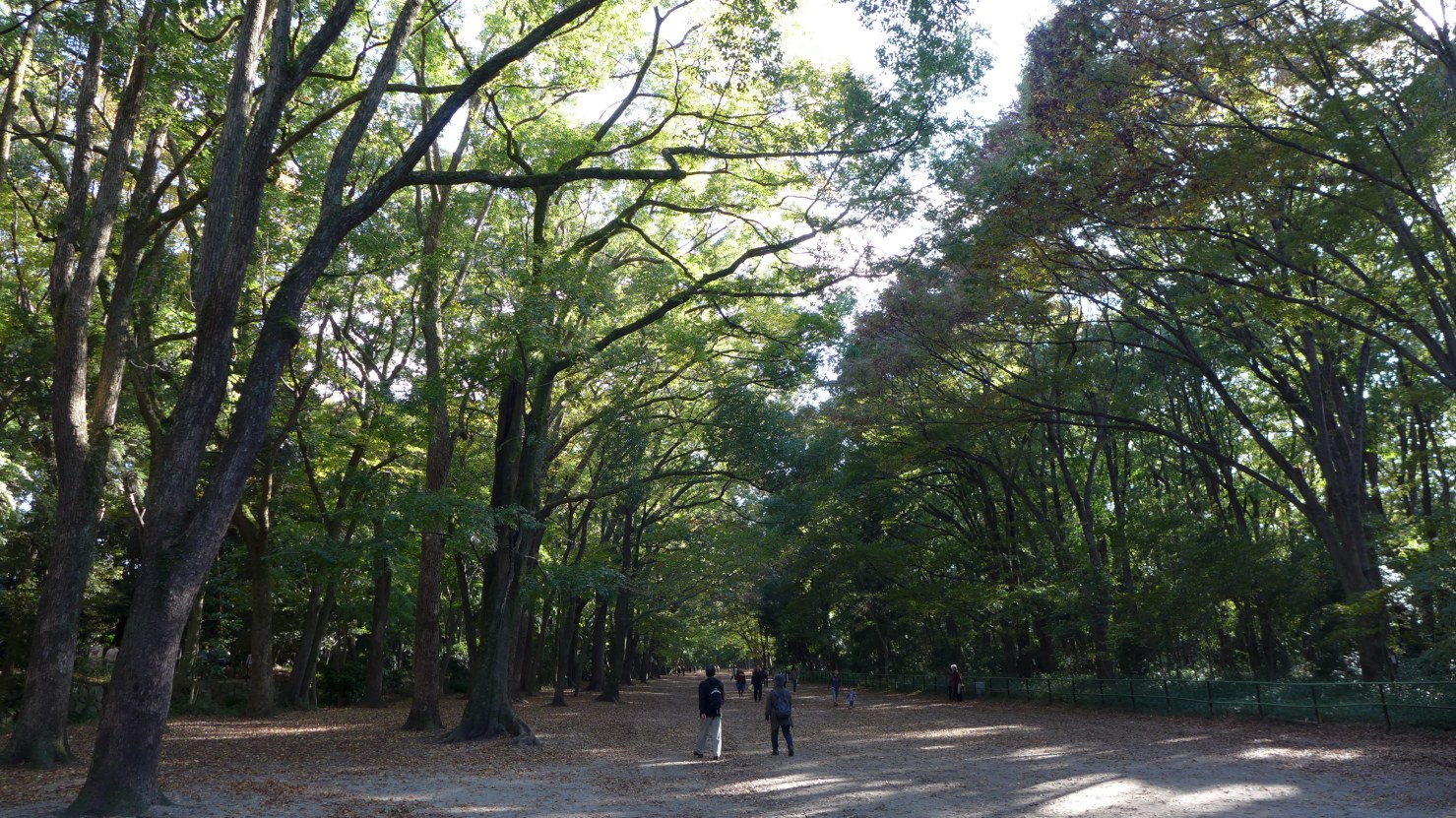 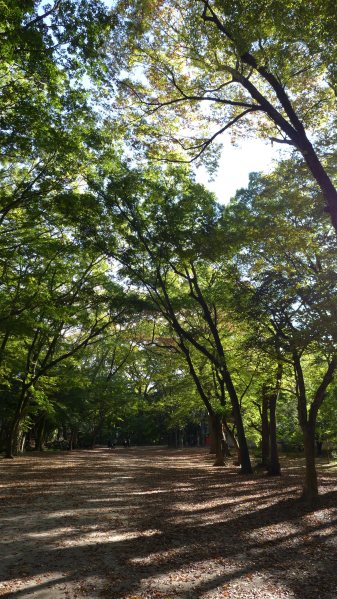 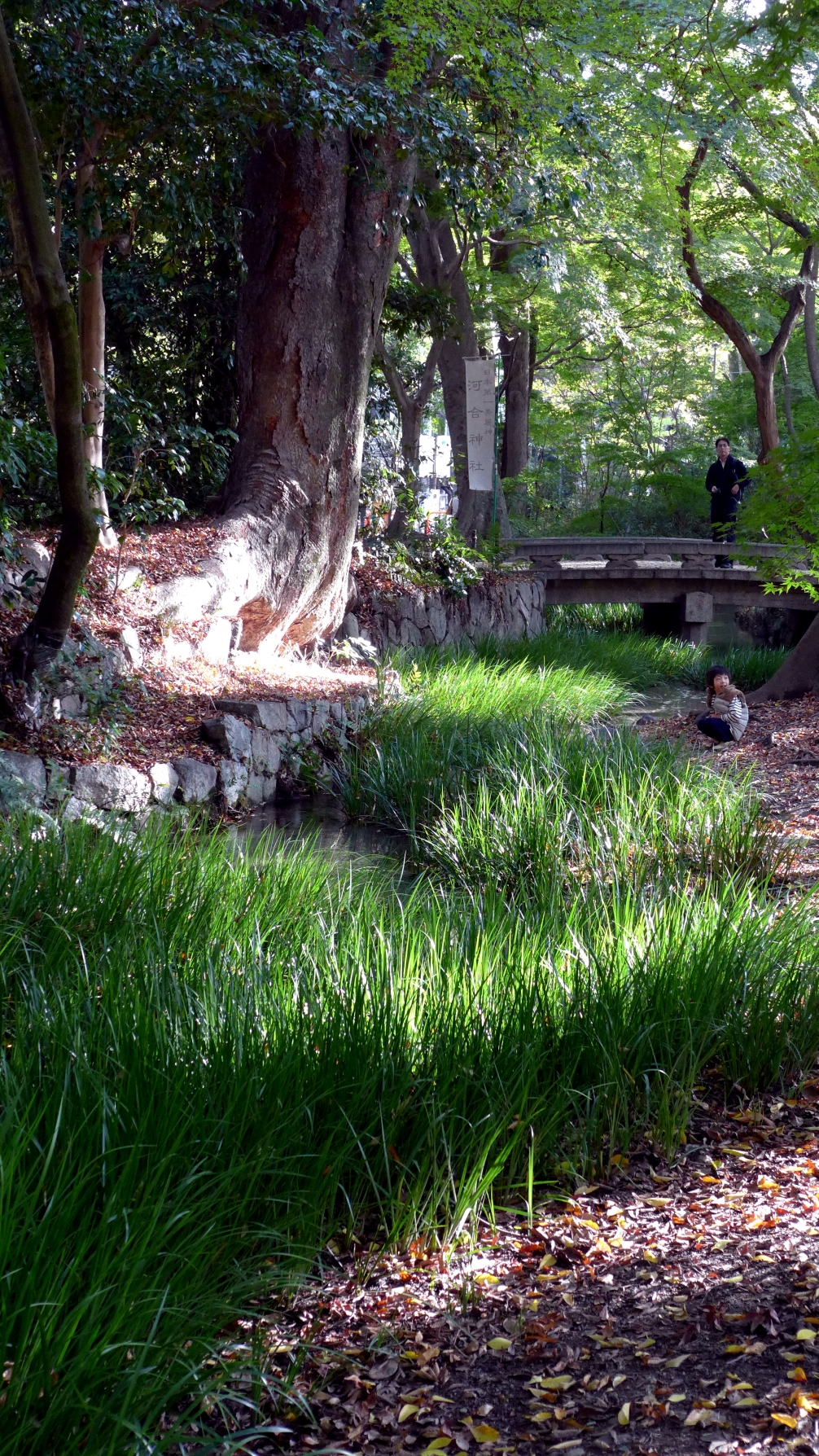 So by now you might be wondering what the deal is with the white rocks. I didn’t find out until I got back and did some research. The English-speaking internet offered me nothing so I delved into Japanese Wikipedia. The gist of it is that every 24 years the shrine must be re-purified and in ancient times this was done by bringing stones from the nearby Kamo river and offering them to the god at the temple. Today the Japanese have a more efficient system – instead of each pilgrim going down to the river and selecting their stone, the wardens of the temple have gathered up a load of the nicest, whitest stones (white being purity in Shinto) and put them in big baskets for people to offer. To get your very own rock to offer you pay 500円 and you get a cloth to wrap up your rock and present it to the shrine. This has been ongoing from September and ends in mid November. This ritual is apparently particular to the Kamo shrines. Perhaps these white stones that look so much like onigiri (Japanese rice balls) help to sustain the gods that live in the shrines as food.

If you are curious the above stone reads ‘world heritage site’ – they are rightfully proud of the designation. The shrine is beautiful and worth a visit, especially on a sunny day when the sun pierces through the trees. The shrine is free as is the forest, so a great few hours visit – I spent about 2 hours there and I was being quite slow in wandering around.

The river was beautiful on the way back as well – I don’t think I’ll ever get tired of seeing it despite living 5 minutes away from it. There were a lot of birds of prey circling about – I think someone was feeding them. The birds are kites, I think, though if someone knows better please enlighten me. 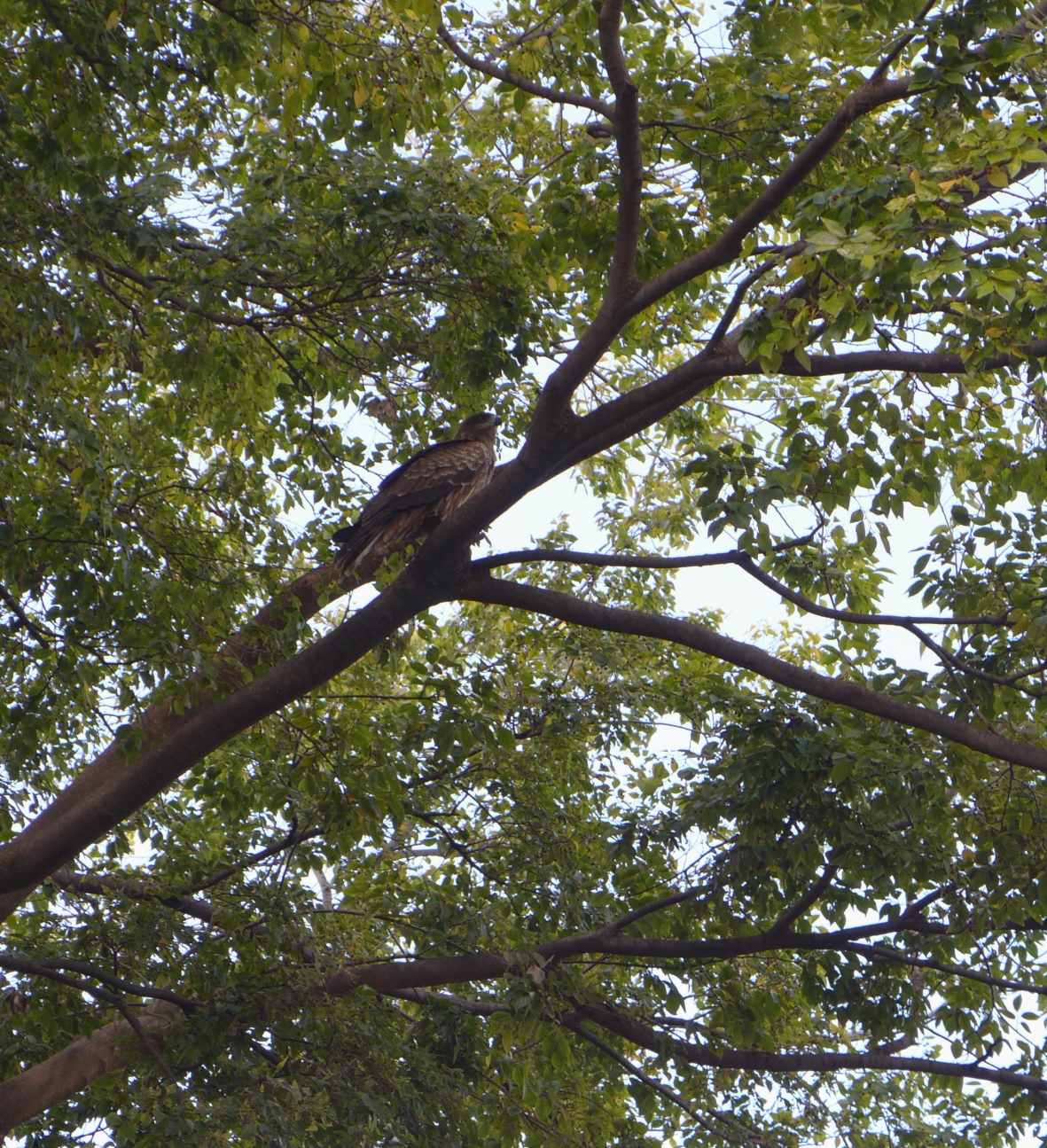 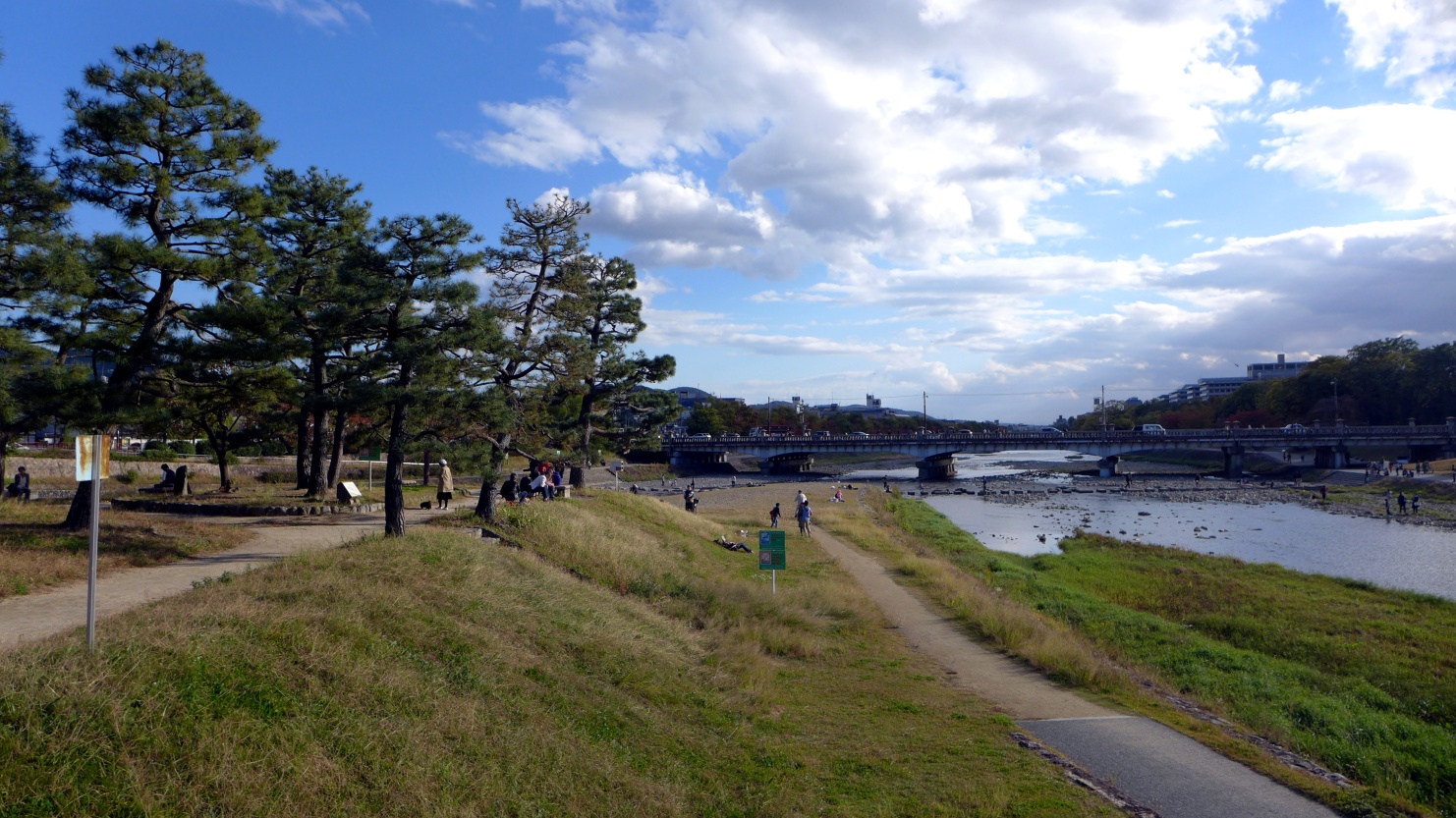