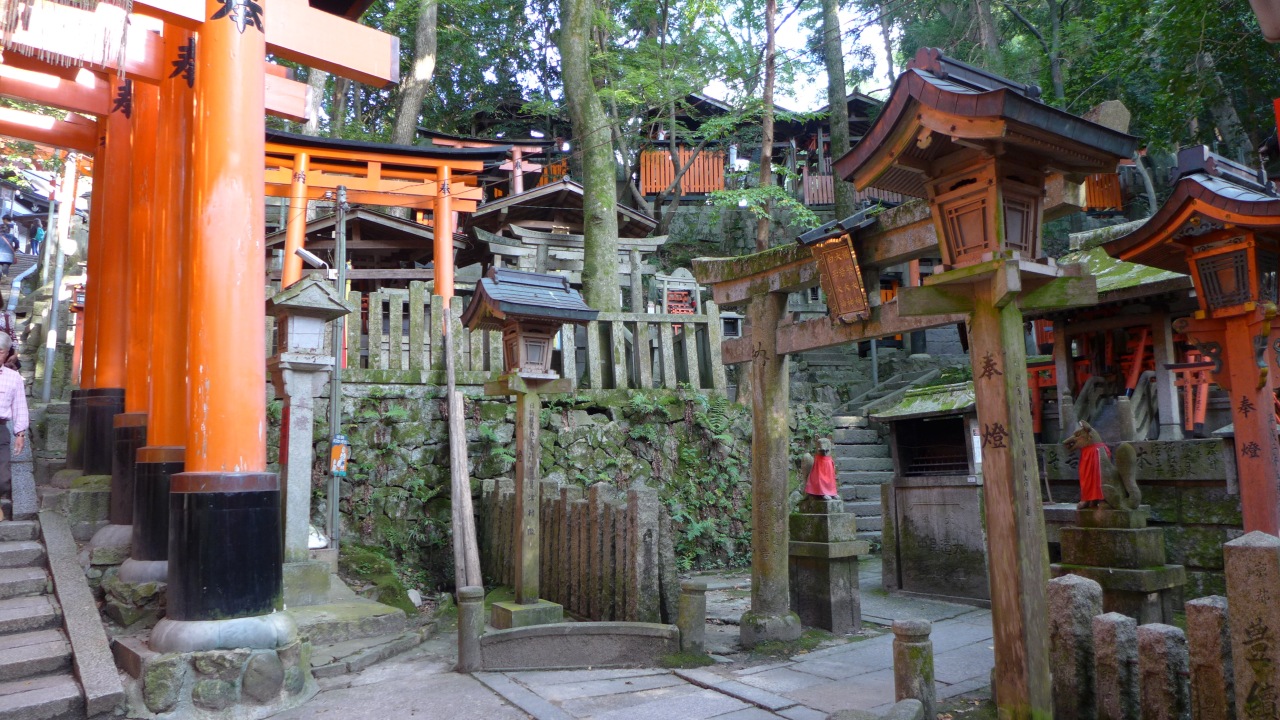 On Wednesday after class I went with some friends to Fushimi Inari-Taisha (伏見稲荷大社), the shrine with thousands of Torii (鳥居) which are the red gates that you see at all shinto shrines in Japan. If you don’t know what one looks like never fear as by the end of this post you’ll probably be sick of them. This shrine is really beautiful and well worth seeing for anyone visiting Kyoto. It was also featured in the film Memoirs of a Geisha. Entrance is completely free!

The closest train station is Fushimi-Inari station on the Keihan line (there is also a JR station nearby) so access is pretty easy. We walked from the station towards the shrine, passing a lot of souvenir shops, sweet shops and even a cat cafe (yes those are actually a thing). As you approach the shrine there are no more cars and the streets are lined with shops and street vendors, including an entire shop dedicated to Hello Kitty which had some terrifying cat toys that moved when you squeezed them hanging from their tails outside. (Note: when I went back a week later the hello kitty shop was boarded up – it seems it went out of business!) 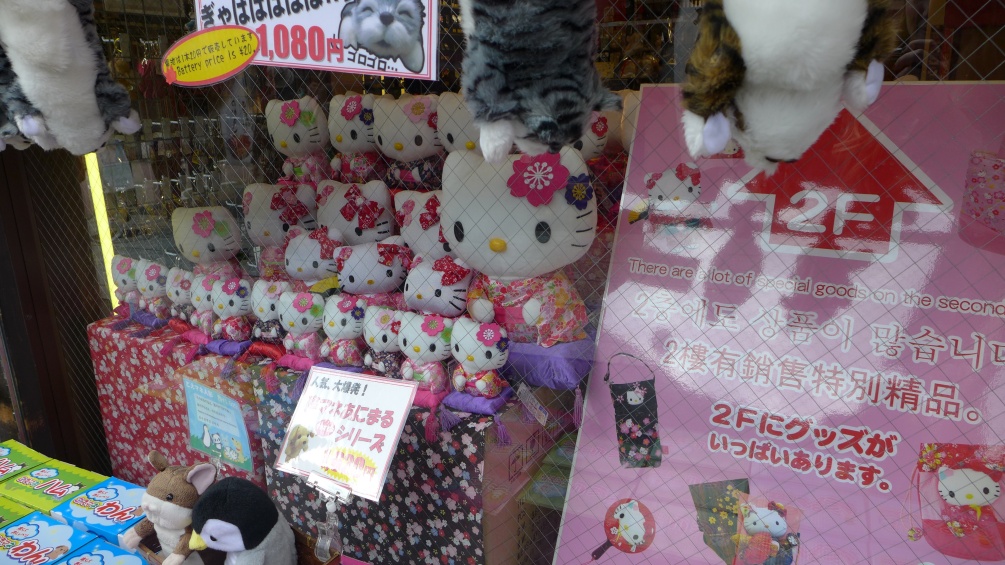 I bought some Yatsuhashi which is a traditional Kyoto sweet made of rice flour, sugar and cinnamon. I bought strawberry and chocolate Yatsuhashi – the outside was chocolate flavour and the centre, which would normally be sweet bean paste, was strawberry flavoured bean paste. It was actually pretty nice; though it didn’t taste that strongly of strawberry I could definitely taste the chocolate. It has quite a glutinous texture and was very sweet so perhaps not for everyone but as I have a sweet tooth I enjoyed it. 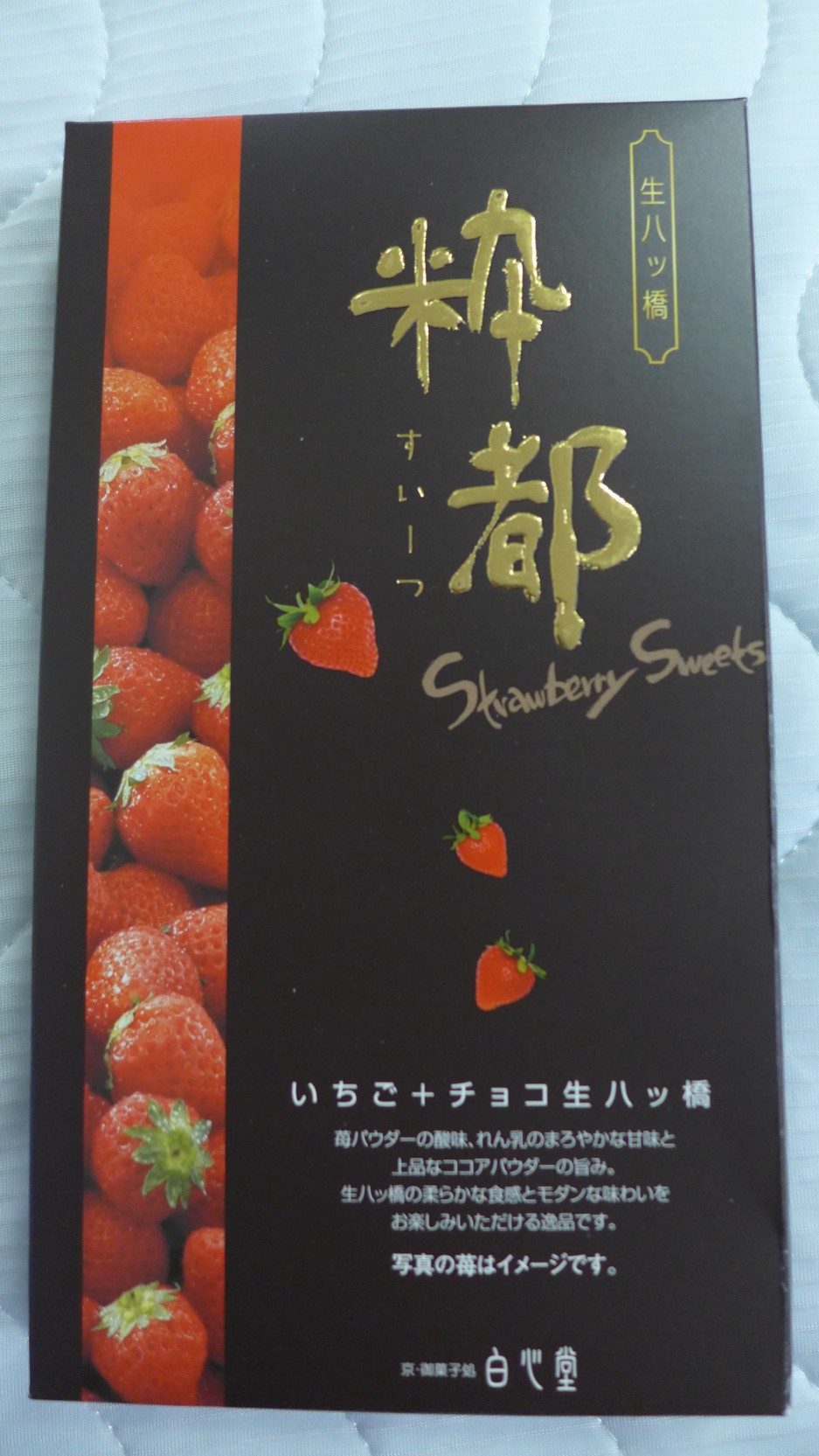 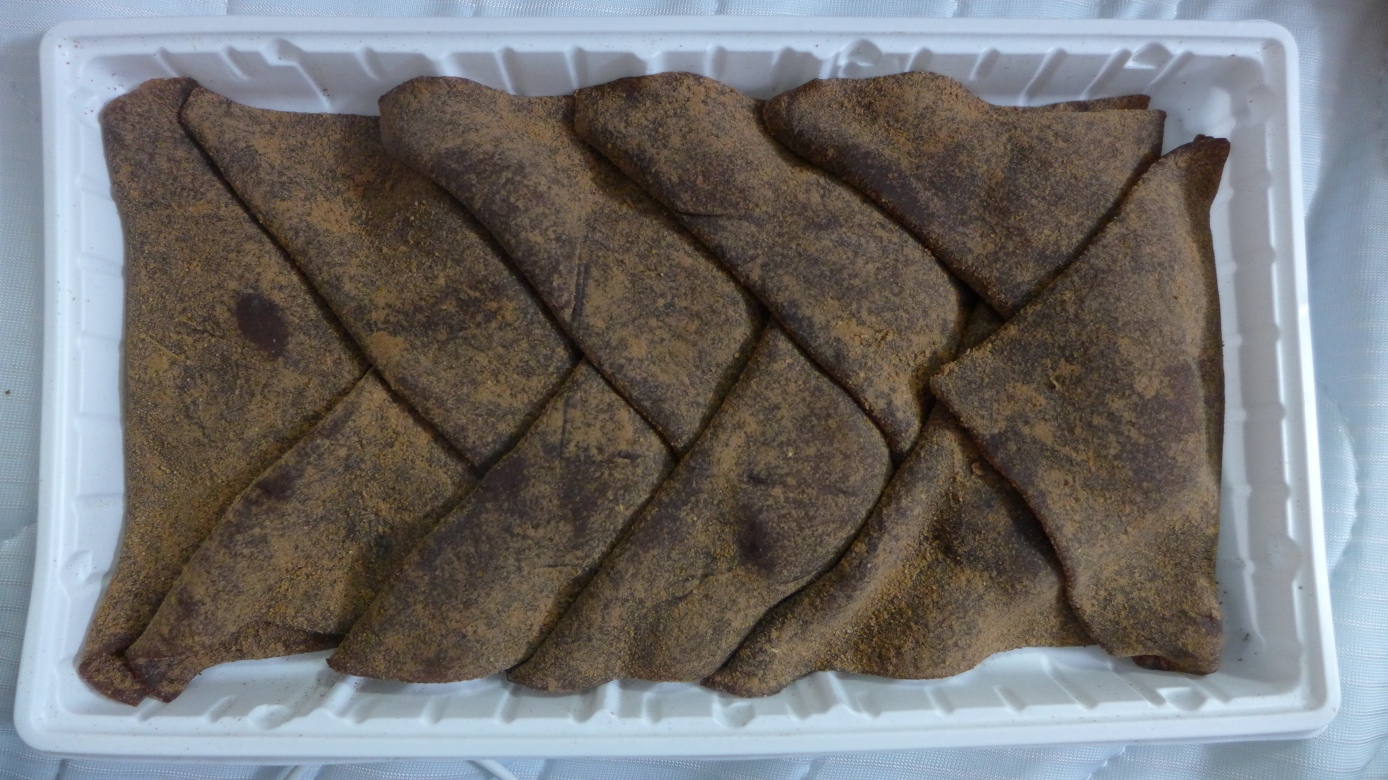 Fushimi Inari-Taisha itself begins with a temple complex that includes all the usual Shinto features – a shrine to pray to and give money, a fortune stand and somewhere to buy charms. The lower temple is big for a Shinto shrine, probably because at new year millions of people come to pay their respects there.

Fushimi Inari-Taisha is a Shinto shrine dedicated to Inari Okami (稲荷大神) the kami of foxes, rice, tea, fertility, sake, agriculture and industry as well as general prosperity – clearly a good guy to visit at new year if you want all your bases covered for the year ahead. As Inari is the kami of foxes there are fox statues all over the shrine often wearing red bibs, though the internet informs me that there is no special reason for them wearing a bib beyond it being a rite.

Note: I am referring to the deities of Shinto as kami (神) as directly translating the term into ‘god’ applies a western idea of what a ‘god’ is which does not really fit into the Shinto concept – kami can be seen as a cross between a god and a spirit rather than a concrete entity that is omniscient and all-powerful. If you are interested in reading more about Shinto there are several good introductions to the topic, I got most of my info on Shinto from the Cambridge Encyclopedia of Japan by Bowring and Kornicki. 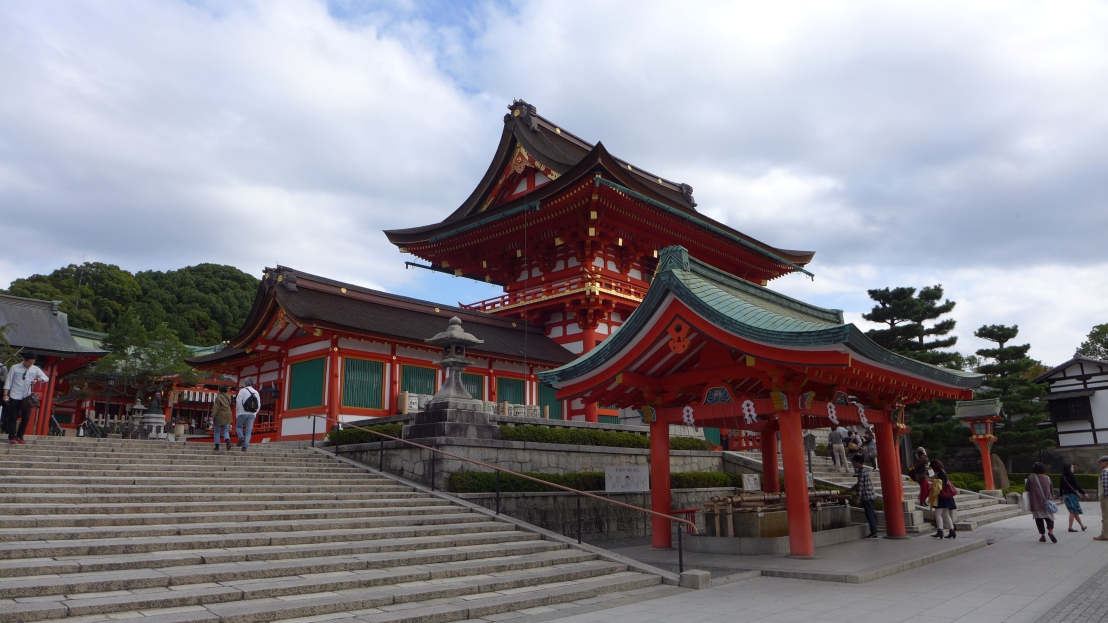 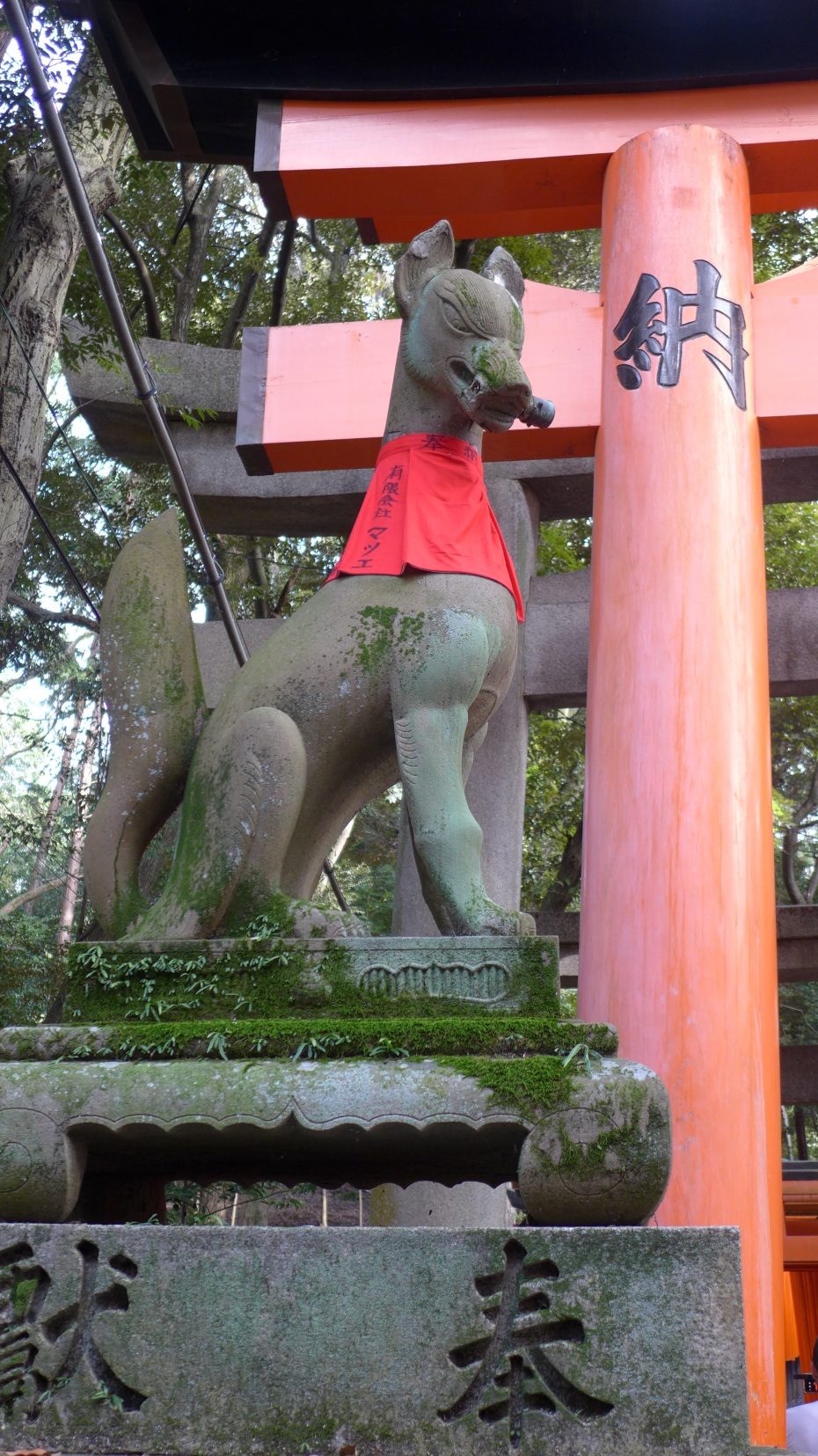 After passing through the lower shrine complex we reached the feature that makes this shrine famous and striking – the Torii. These red gates line the path from the lower shrine all the way up the mountain to the various shrines that make up the complex creating a tunnel of red around the path. The sun shining through the gates onto the path was beautiful. Each gate has a date written on one side and the name of the company that paid for the gate on the other side – thousands of gates have to come from somewhere. 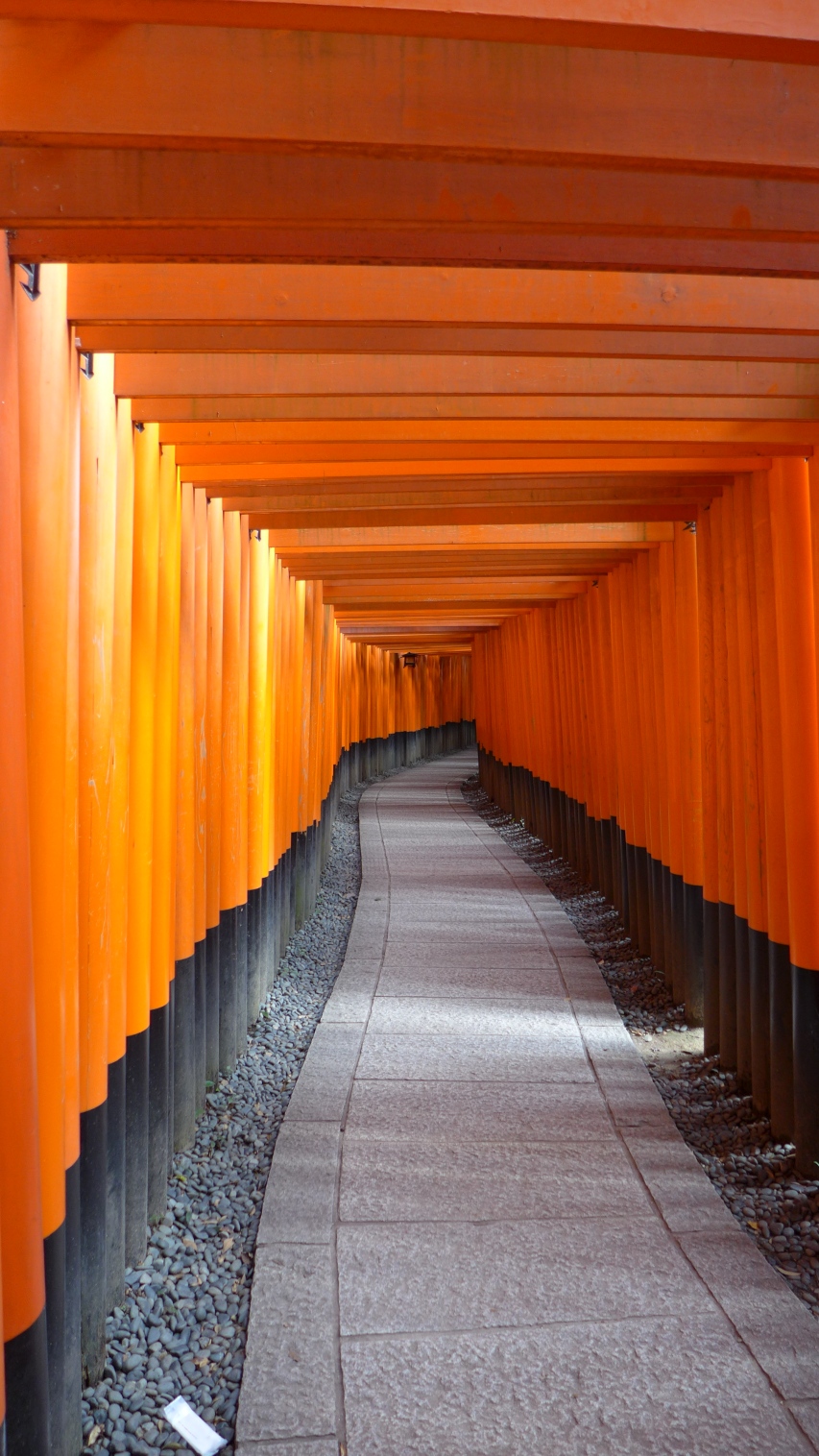 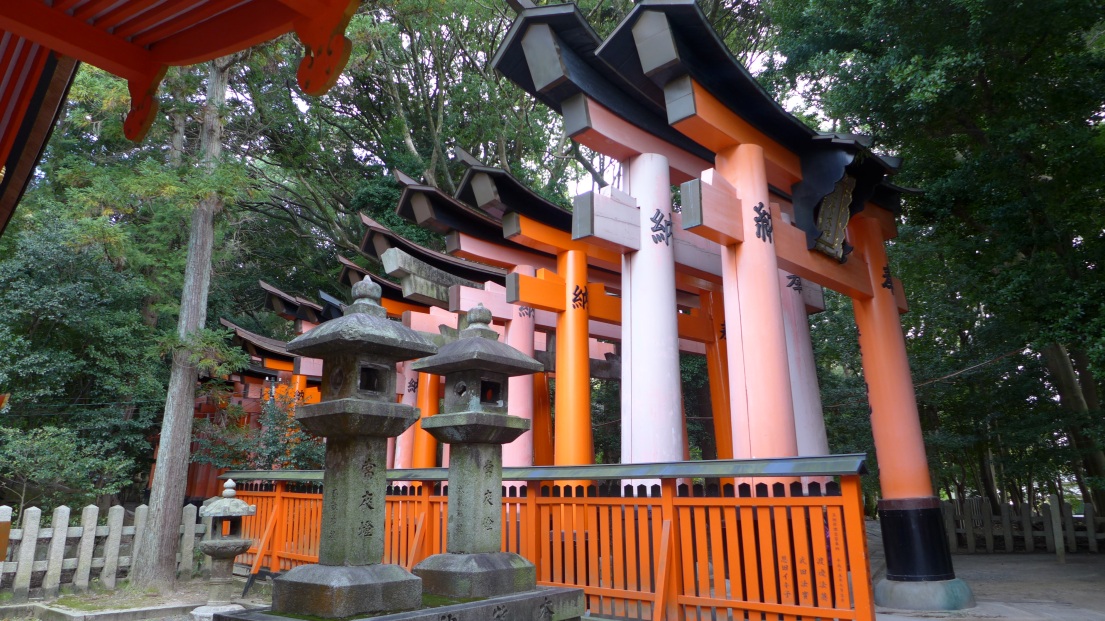 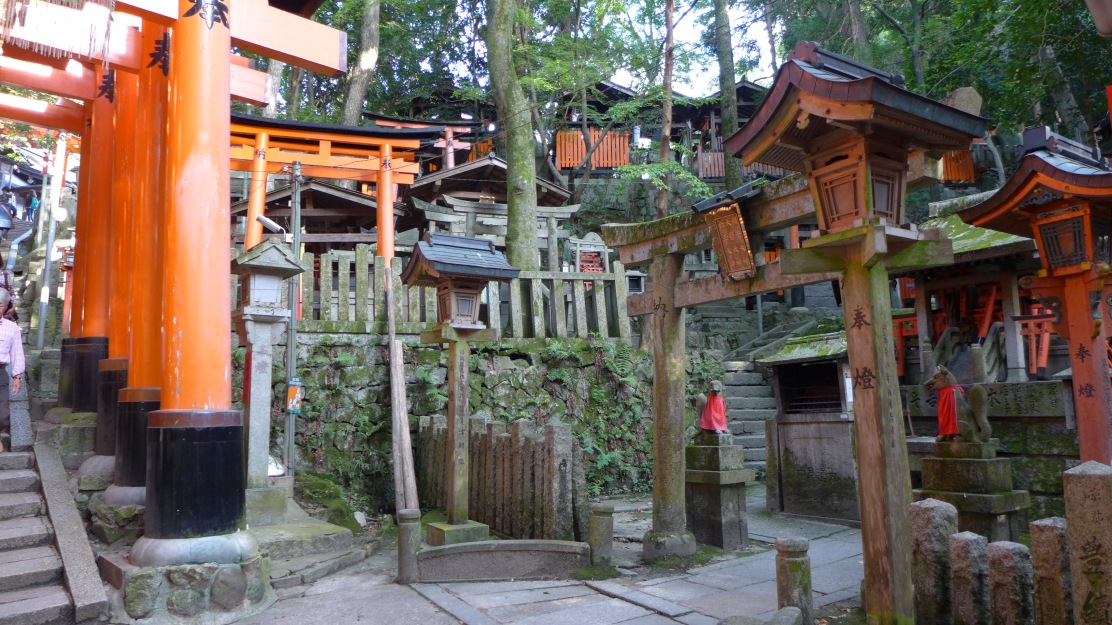 The whole complex spans 4 km up the mountain and takes about 2 hours to walk all the way round. We did not do the whole complex as it was starting to get dark and we were all fairly shattered from university. There were shops selling drinks and snacks up the hill as well as vending machines though as you get higher up there are less shops. There was even a restaurant which had traditional tatami seating – you sit on the tatami mats on the floor rather than on chairs. 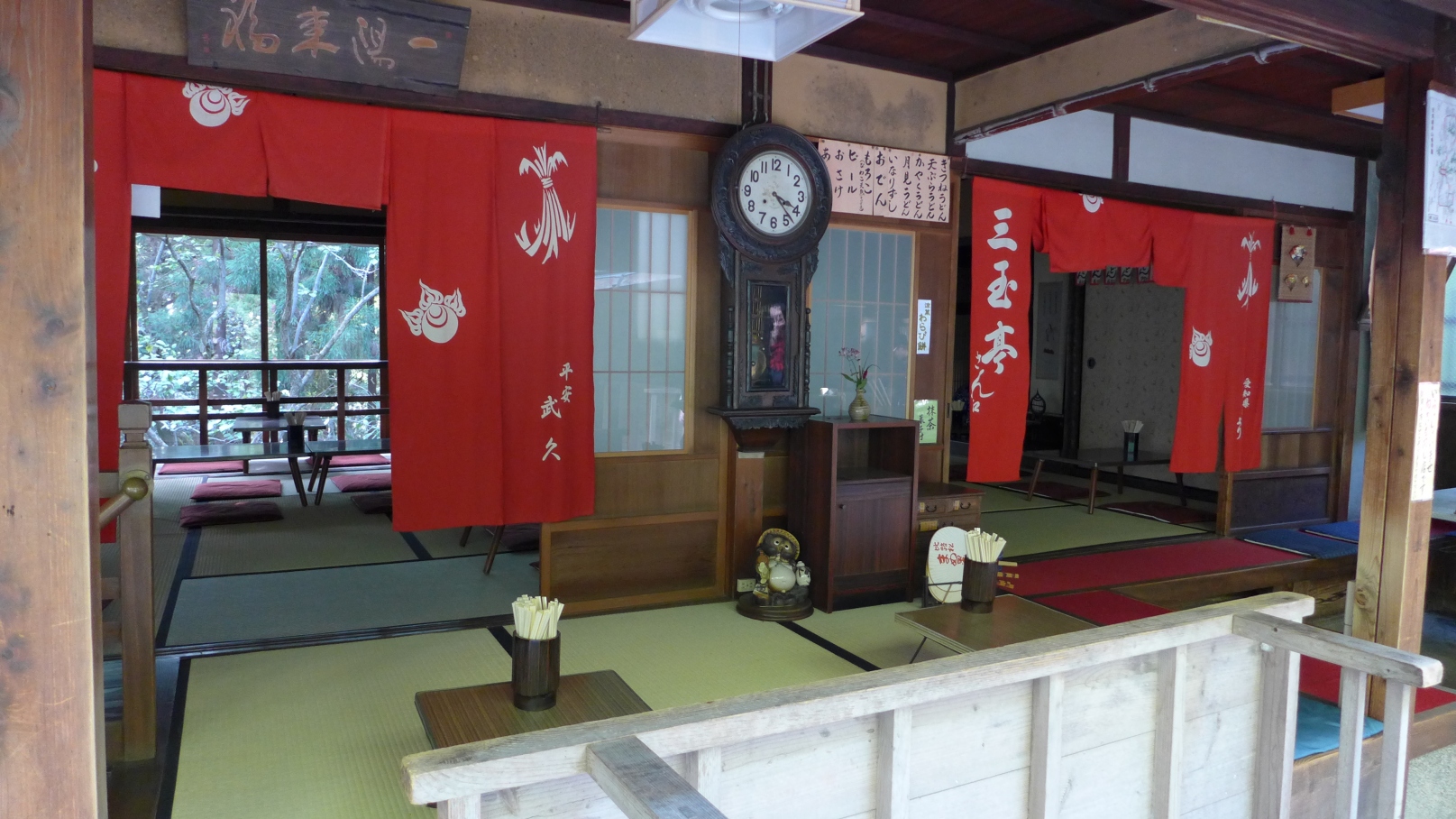 We went up to the first viewing area which was spectacular – you can see all of Kyoto from the mountain. We went in the afternoon around 4pm and the sun was shining off the buildings. Though the mountain does not face East I imagine the sunset shining off Kyoto would be beautiful. 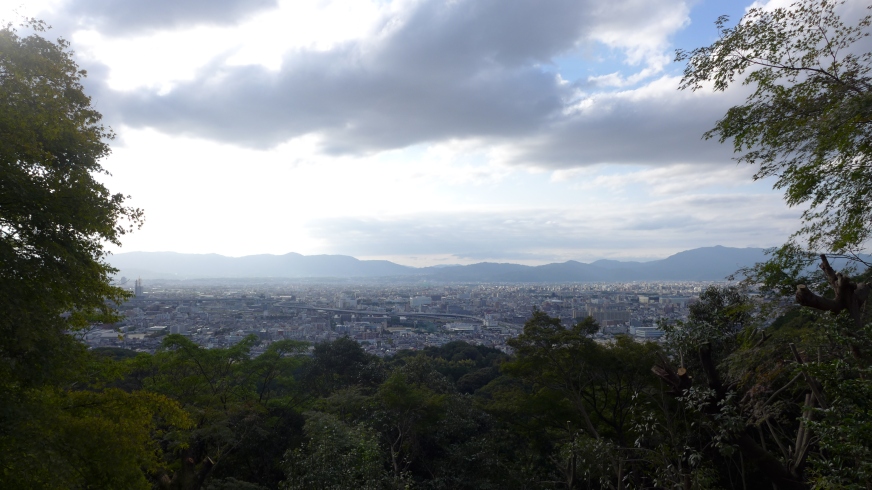 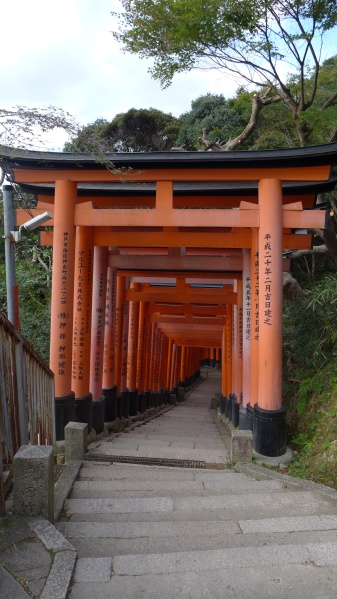 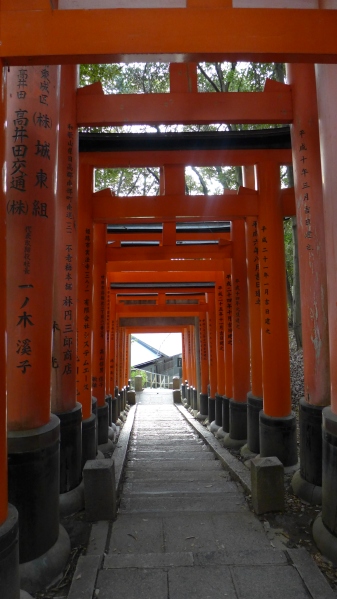 We made our way back down the mountain and took a different way back. This was a good idea as it gave us the chance to see more of the shrine and a less visited part, even though at one point we thought we were lost. The shrine’s entrance had been quite busy so seeing areas that were mostly deserted was nice. We even ran into a cat relaxing in one of the shrines – though he’s not a fox I suppose he’s close enough that he can pretend. 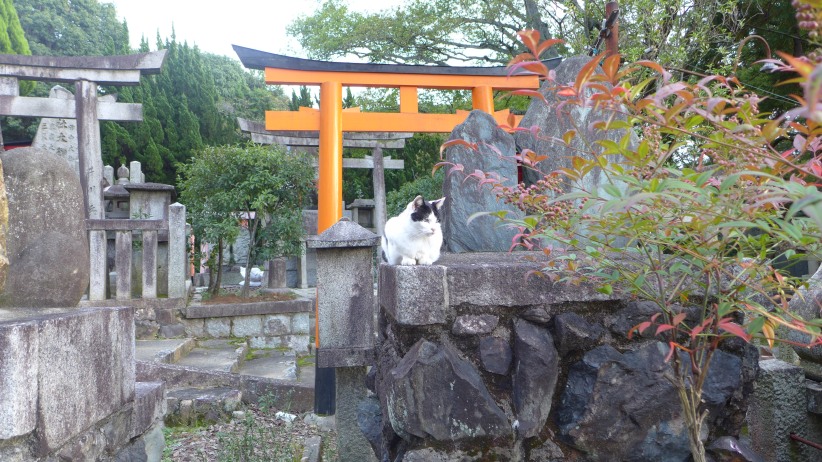 We eventually reached the main road and the shops again. There I bought Taiyaki with ice cream inside it. Taiyaki is fish-shaped pancake, hard enough that it holds its shape and you can add filling. Mine had banana, cream, ice cream and custard cream in it. It was really tasty. 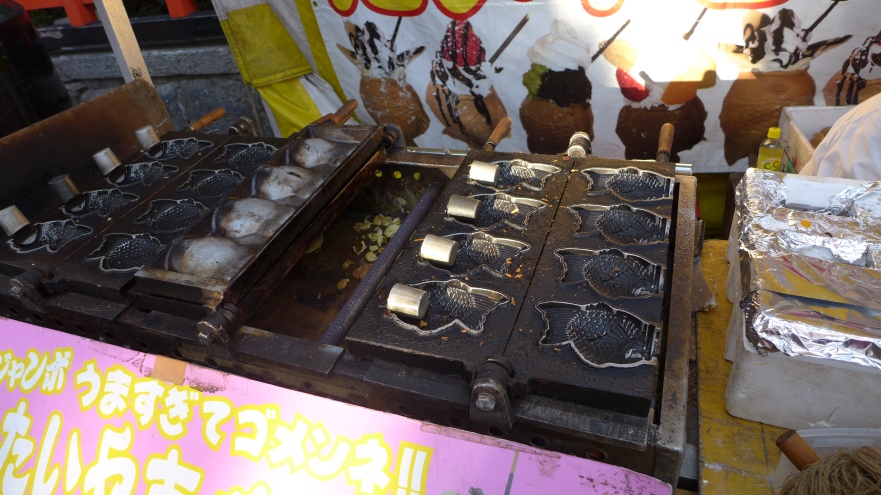 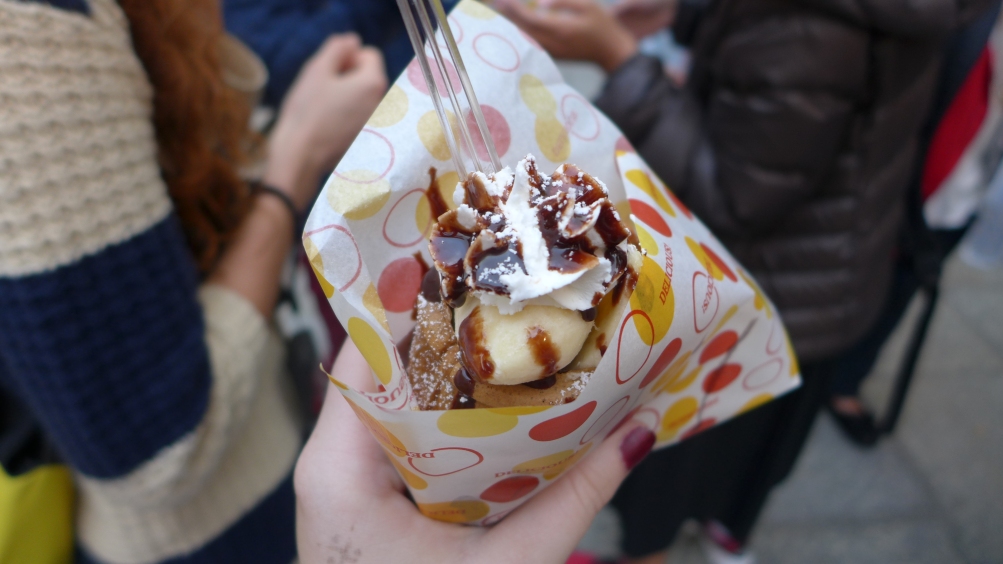 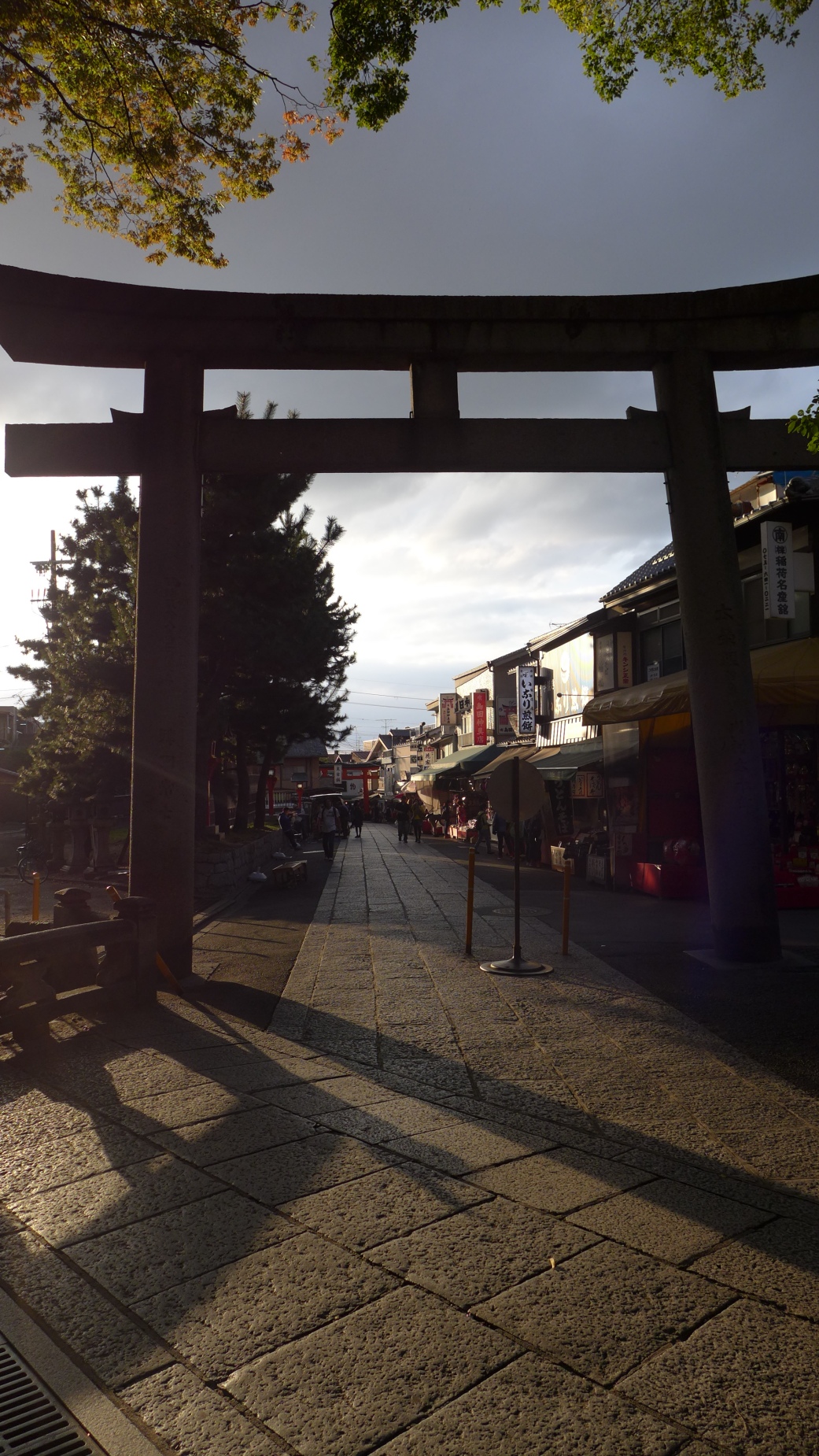 All in all I had a great day at Fushimi Inari-Taisha. This whole trip only took 3 hours or so so it’s a good afternoon trip. Other than the train fare it’s also free so well worth a visit.

6 thoughts on “伏見稲荷 The Gates of the Mountain”