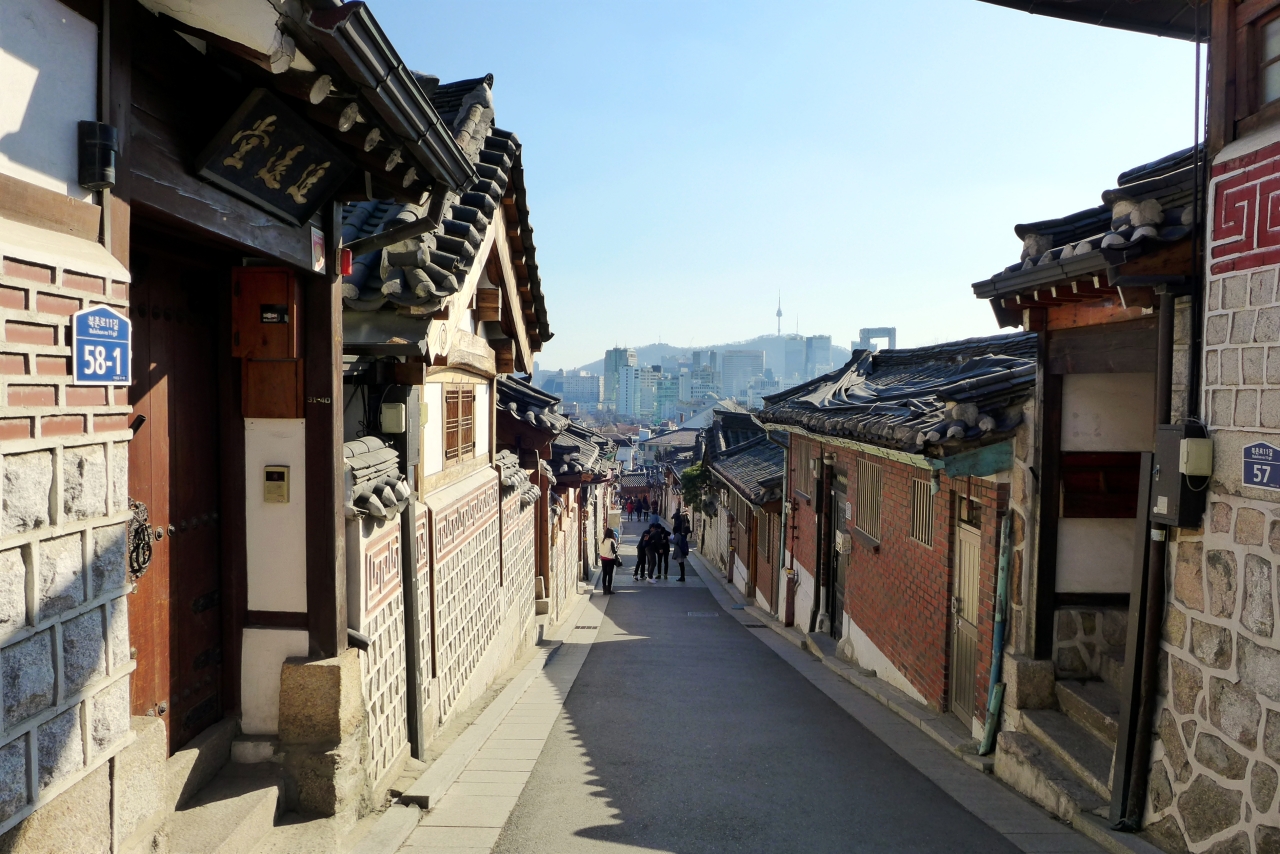 A short walk from the painted palace, Changdeokgung, we found the ancient neighbourhood of Bukchon, a preserved neighbourhood that dates back 600 years to the Joseon period of Korean history. Walking up the narrow sloped streets was like walking past mini castles; each house is completely enclosed with high walls and sheltered gates – there is no telling what is inside from the road aside from the occasional tree poking out. It felt like walking around a maze or some kind of film set – I could imagine a chase on foot across the densely packed roofs or through the many mysterious doors. 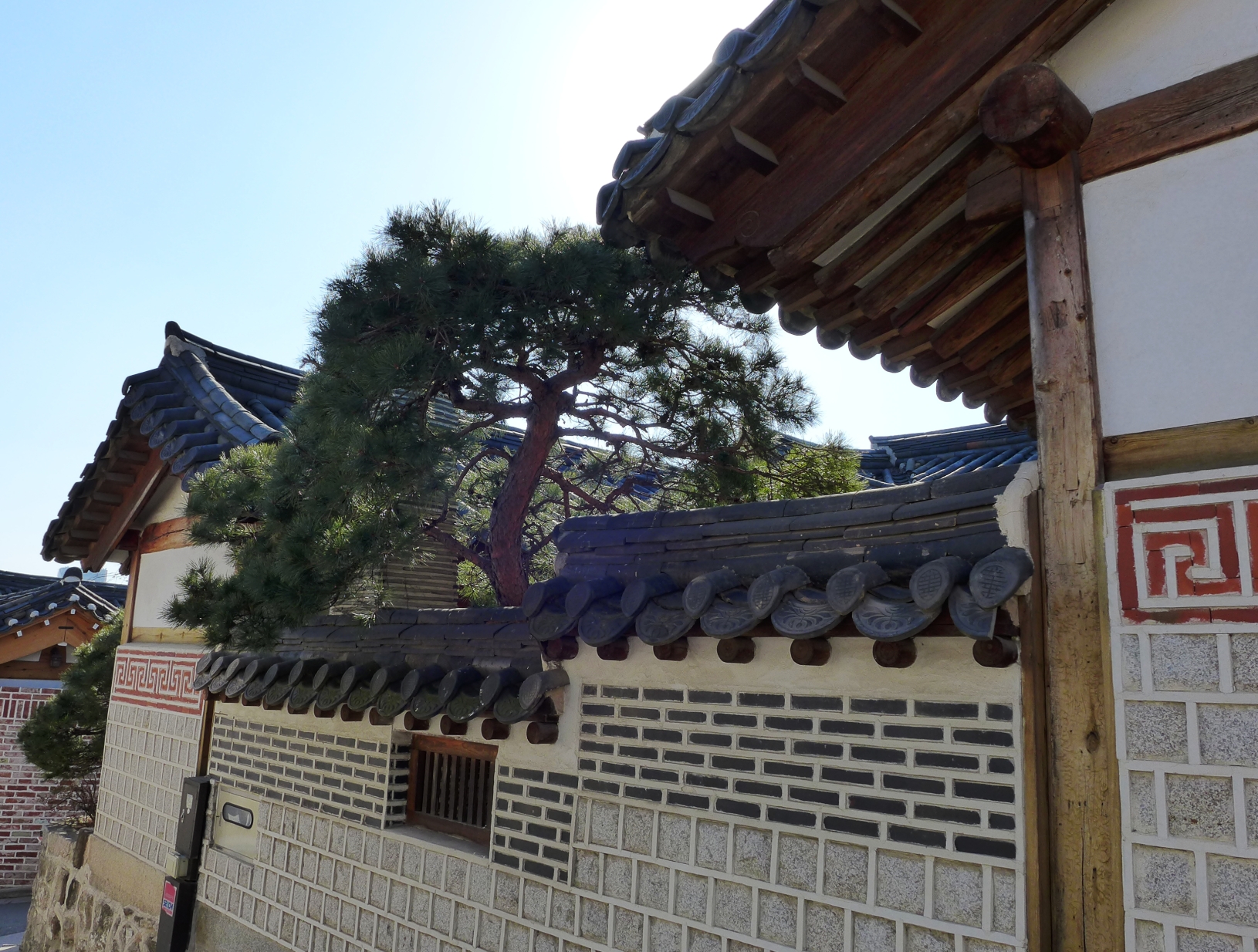 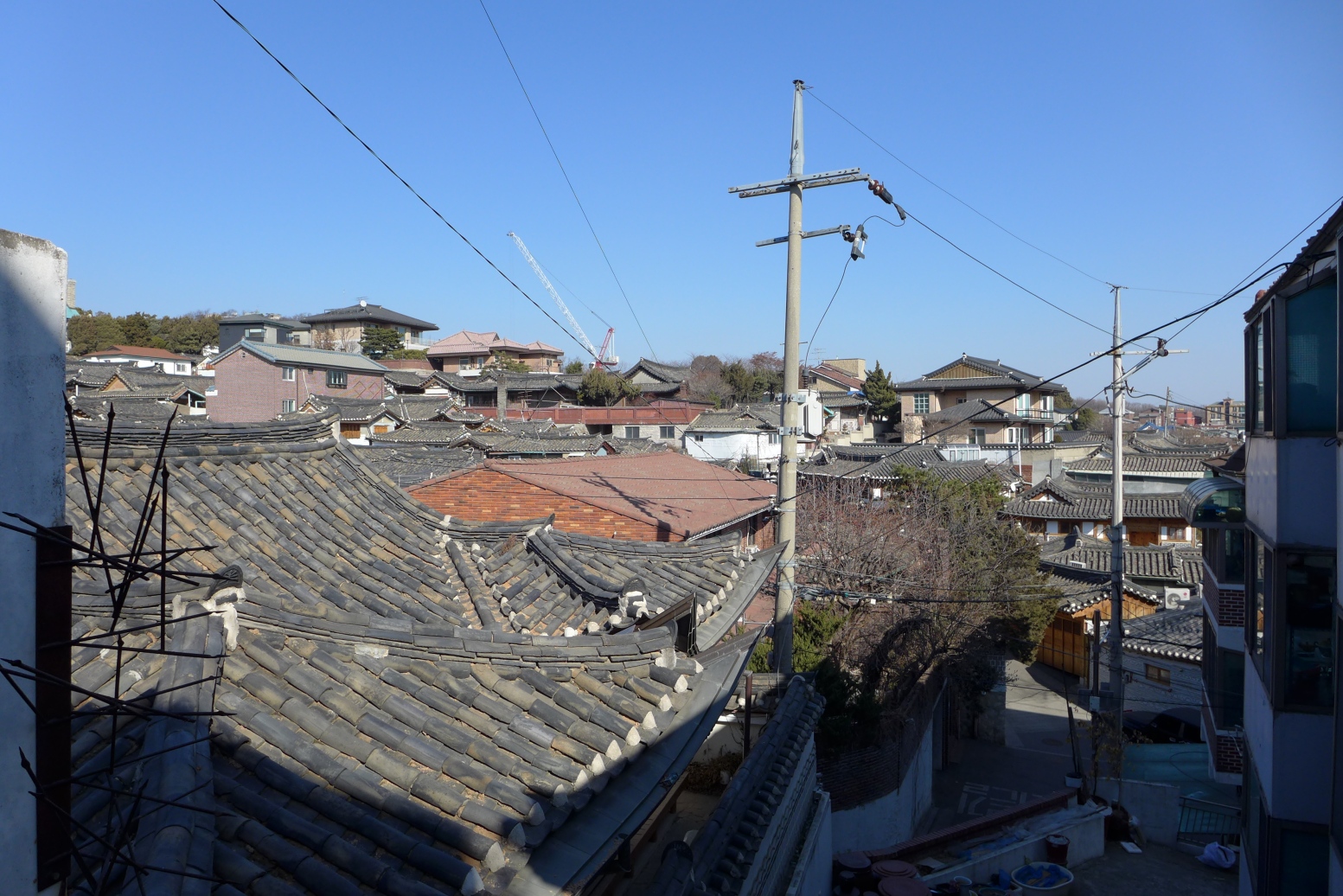 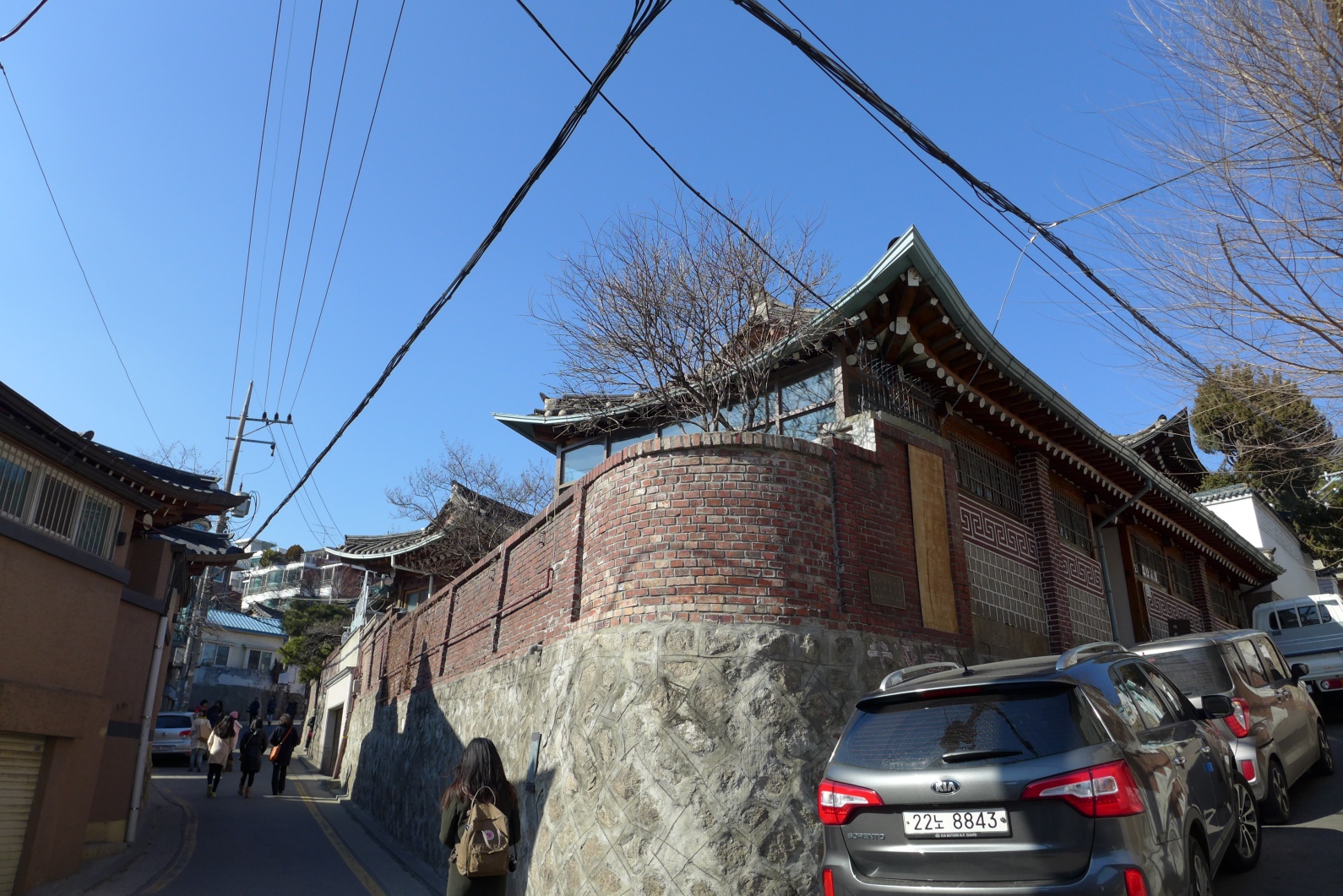 These islands of privacy are called hanoks, and arose in the mid to late Joseon period (1392 – 1897) as a result of an increase in urbanisation; large tracts of land around Seoul were divided into smaller plots and families built their hanoks there. The placement of hanoks is very important as they follow the principle of baesanimsu  (배산임수 / 背山臨水). If you are able to read the characters 背山臨水 you will see that the principle of baesanimsu is to have the back of the house to a mountain (背 – back 山 – mountain) and to be facing water or a river (臨 – look to 水 – water). Baesanimsu is part of the art of feng shui, which aims to achieve harmony with the surrounding environment. Bukchon village was considered one of the best plots in Seoul, facing the Hangang river and sitting on the slopes of the mountains. 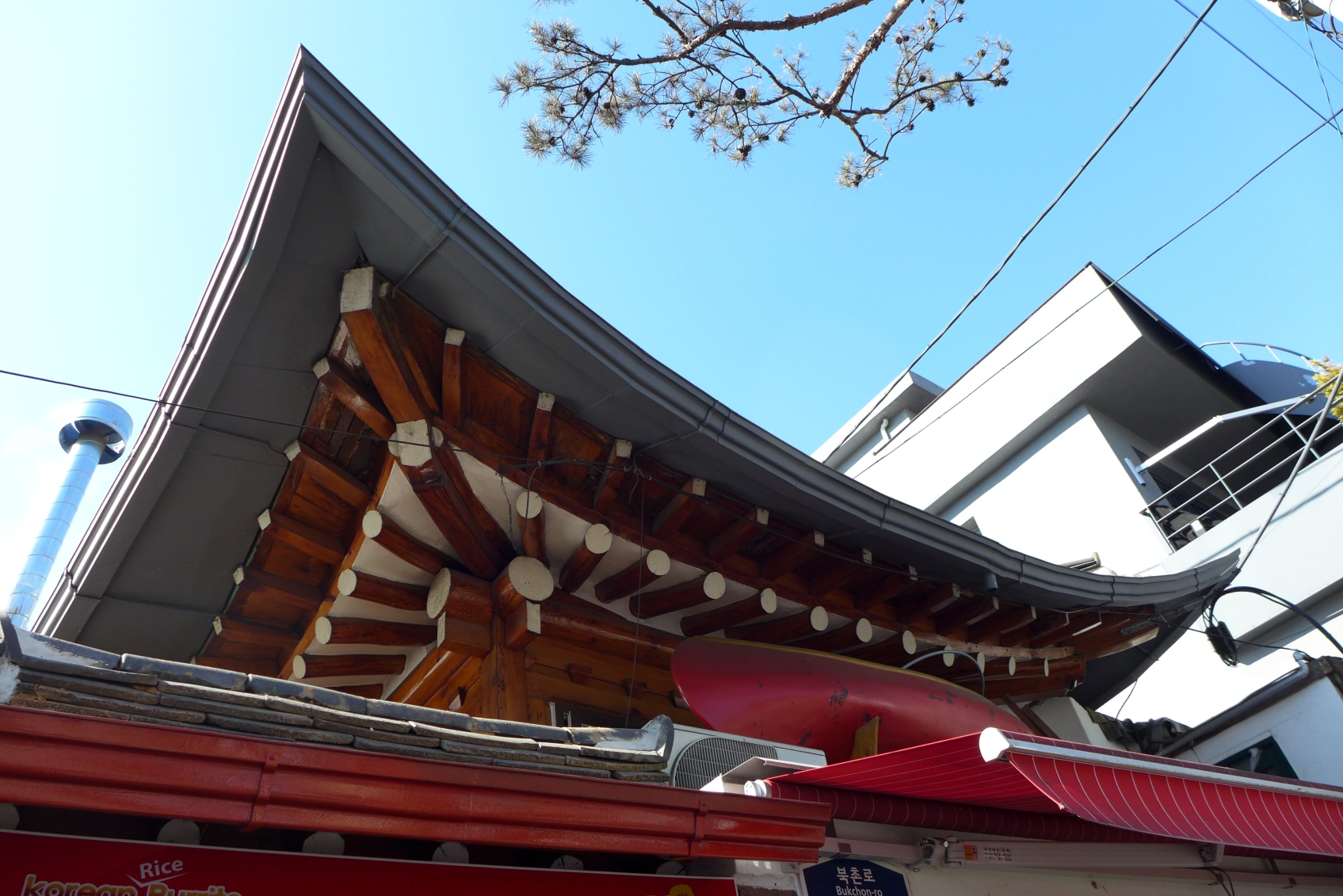 These houses were not occupied by your average peasant or urban worker, these were the homes of the yangban, the influential government officials and high class of Korean society in the Joseon period. Unlike many pre-modern societies where class was inherited from ones ancestors, the status of yangban was achieved through passing state exams and climbing through the ranks of government officials. In theory anyone could become yangban, though the reality was that peasant families could not afford to educate their sons to sit the exam nor could they spare them from the fields come harvest time, so wealth basically became a necessary prerequisite to become yangban. Families that achieved yangban rank generally retained it as their status became established within their community. Though meritocratic in theory, Confucian Joseon society remained a society divided by wealth and class like many others. Walking around, we noticed a lot of very expensive cars in Bukchon; it appears wealth is still necessary if you want to live in this prestigious neighbourhood.

The hanok is traditionally either L or U shaped to create an inner courtyard surrounded by walls – the U shape tended to be used in the North of the country to conserve heat. Hanoks also contained an ancient heating system called ondol, which consists of a furnace directly heating thick masonary floors. The earliest example of an ondol-like heating system is 1000BC. The places closest to the furnace were reserved for elders and honoured guests. Seoul was very cold when we visited – the system would be very necessary in the winter to prevent illness or the death of older family members. 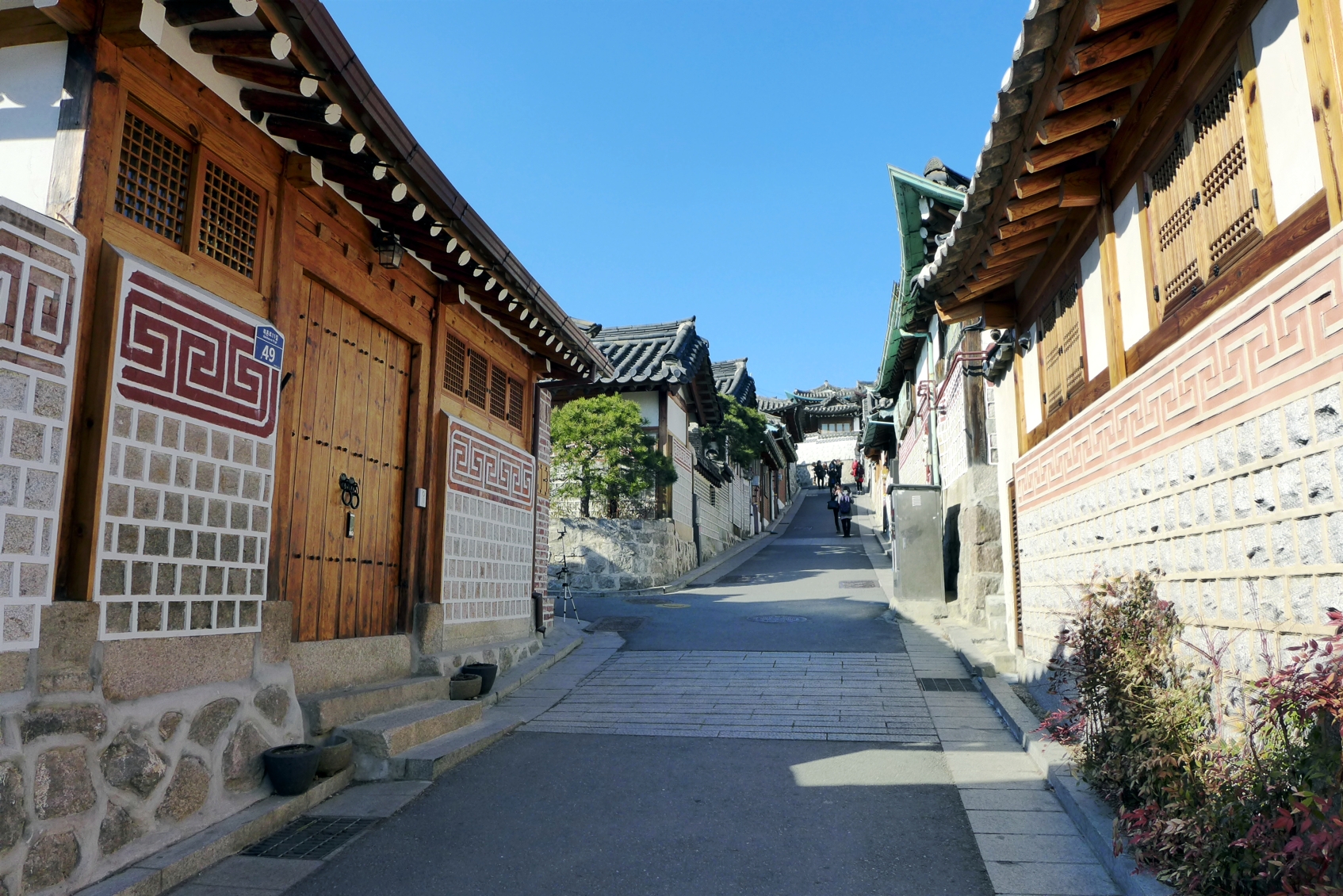 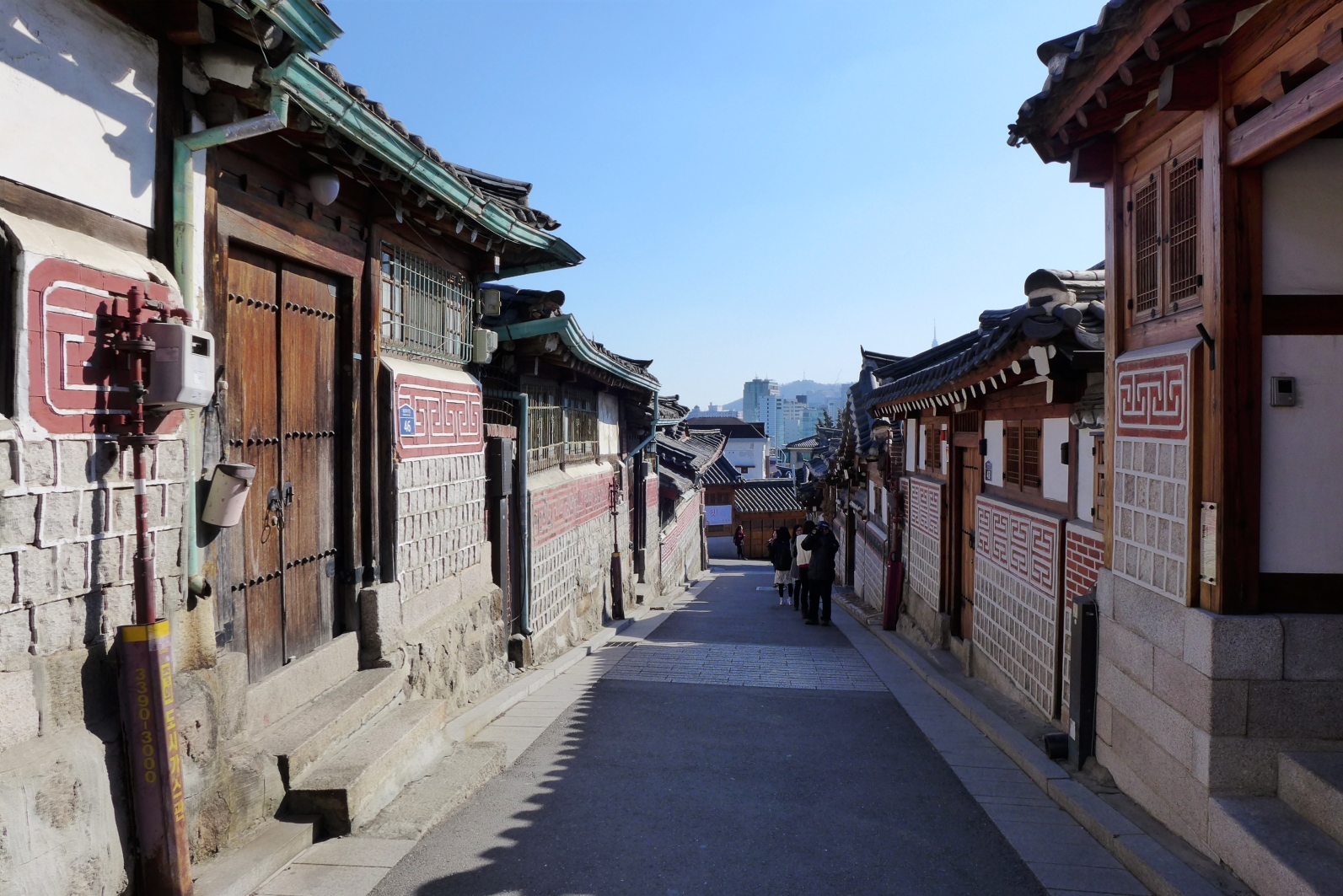 The streets were busy with tourists when we visited and there were signs everywhere encouraging tourists to be quiet when visiting – this neighbourhood is residential and the government has received increasing numbers of complaints as tourism to Bukchon increases. Hanoks are only recently protected in Seoul; in the late 20th century and into the early 2000s many were knocked down to create high rise buildings. 30 years ago there were over 80,000 hanoks in Seoul but today only about 12,000 remain. Thankfully now these beautiful houses are protected. 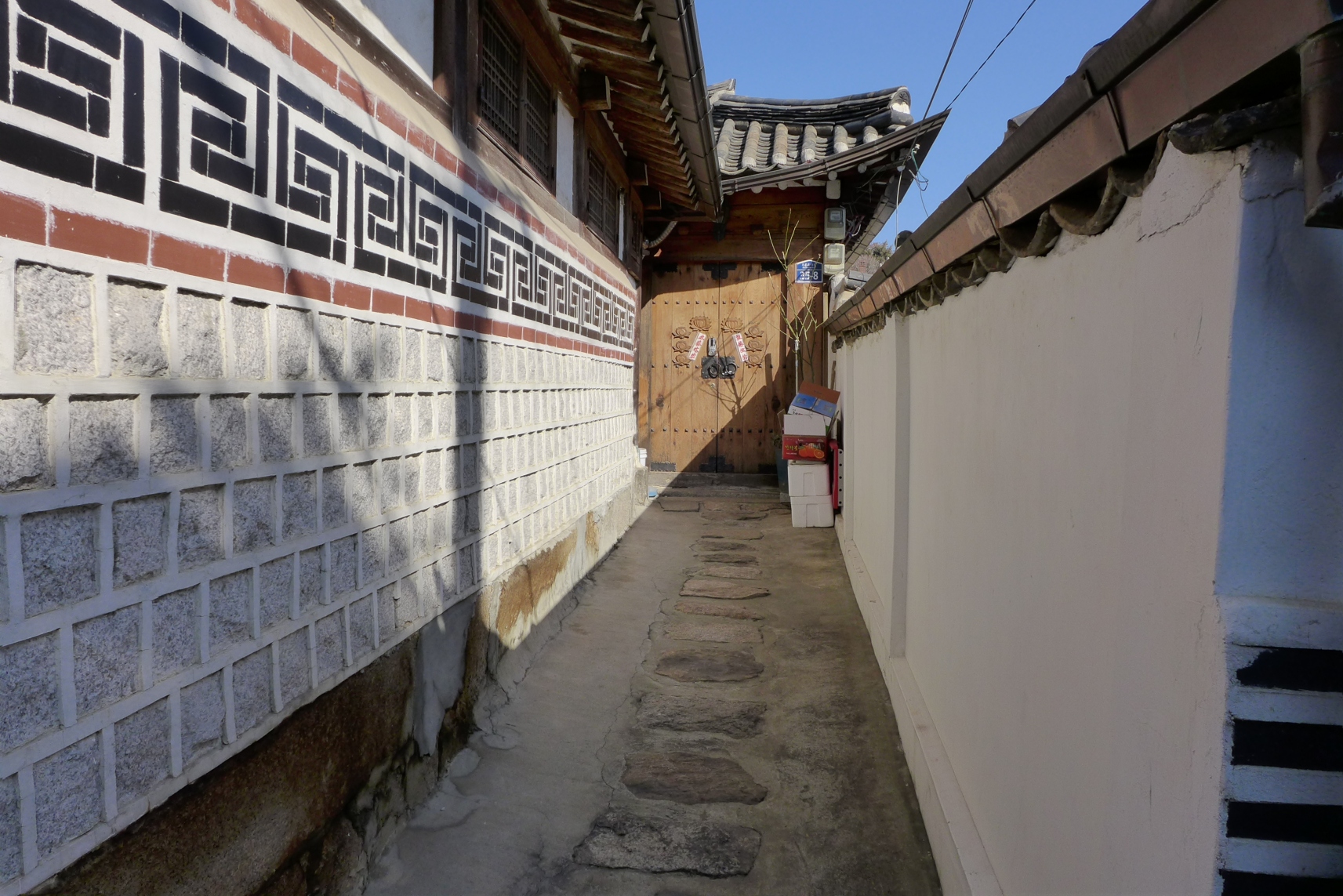 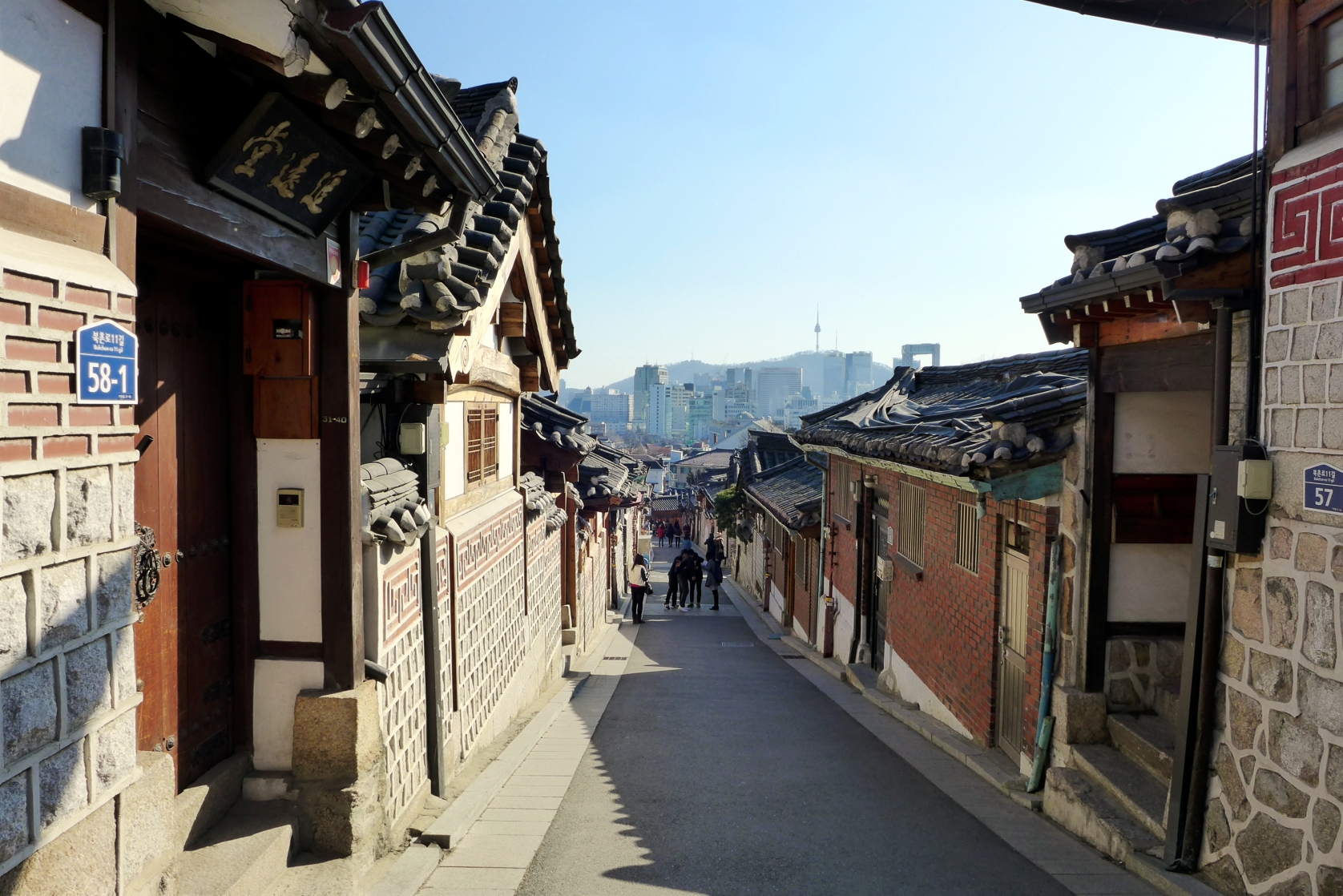 Up one of the two incredibly picturesque streets, past the man selling selfie-sticks, was a house that had opened its doors to the public as a museum. We passed through into a courtyard brightly lit by the afternoon sun, surrounded by a wood lattice. If you were willing to part with your shoes on such a cold day you could enter the house and explore the narrow corridors. They were showing an exhibition on traditional Korean funeral biers, showing small figurines called Kokdu that symbolised supernatural beings protecting the dead, as well as the ends of the bier which were traditionally dragons, a symbol of protection from evil powers as the soul travels from this world. 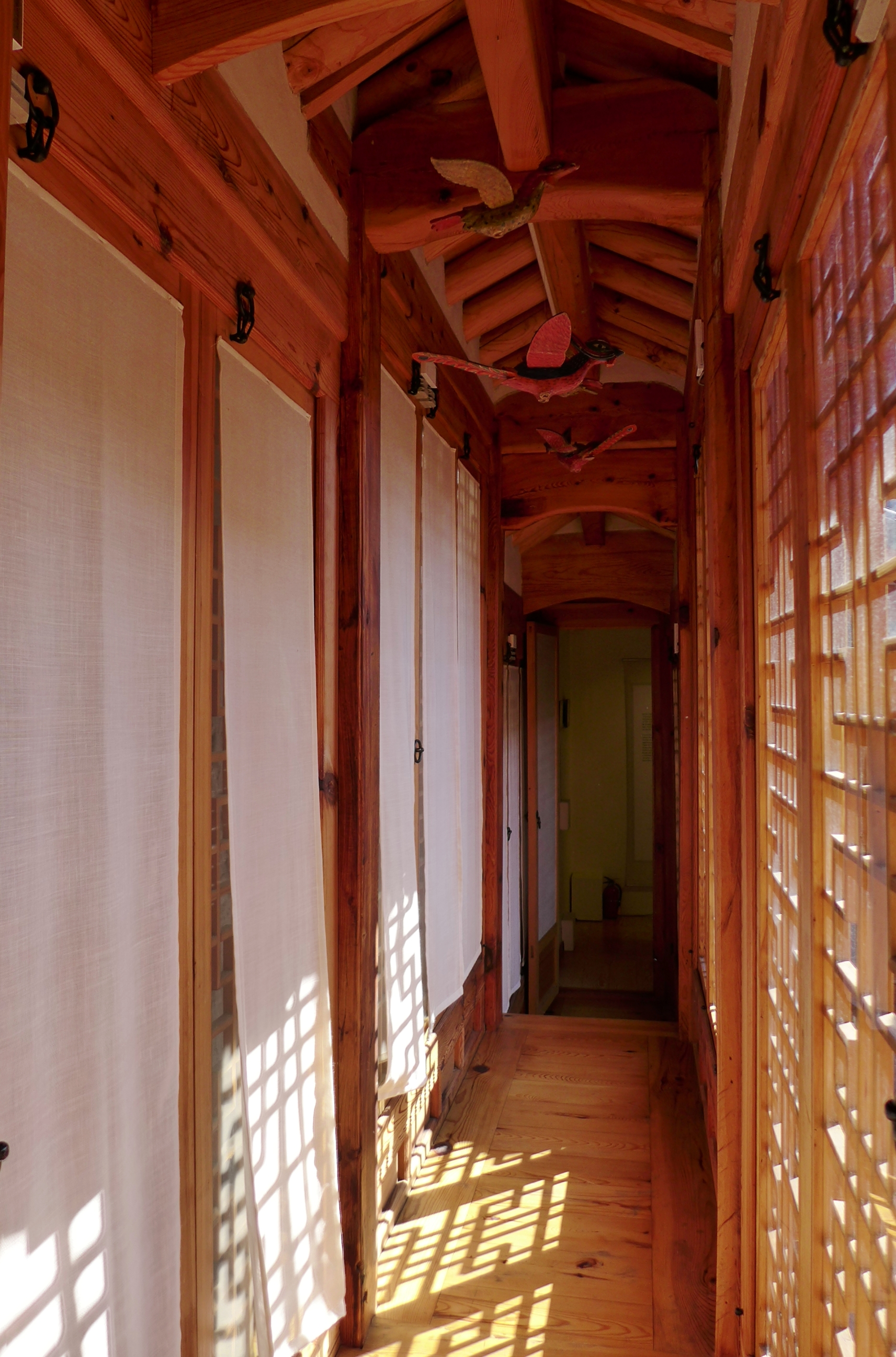 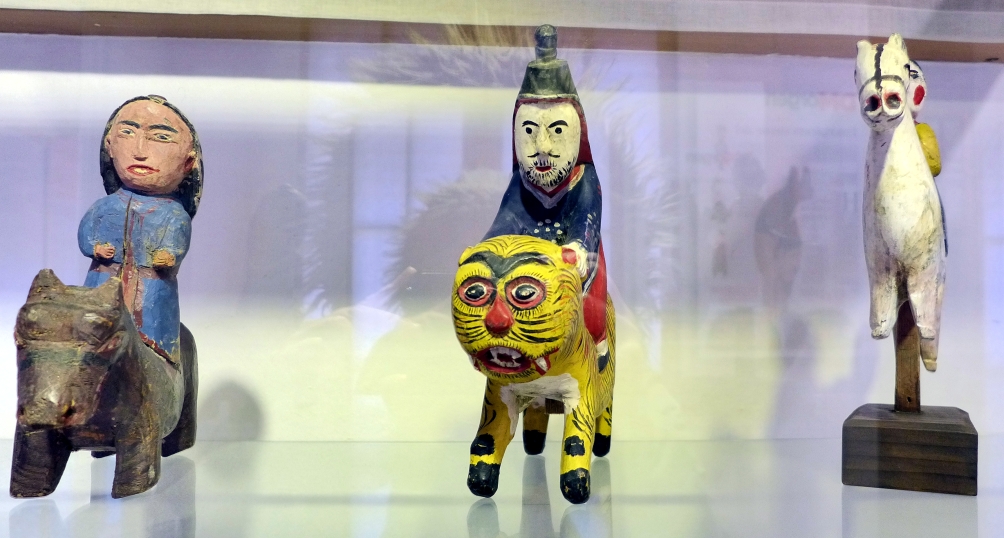 The small details of the architecture were good to spot – though all had steep walls and curving roofs, the doors varied greatly and we often saw the character 喜 doubled up as an embellishment. 喜 means ‘happy’ or ‘joy’ and is often used in China as a marker of celebration. The use of it in buildings would be in order to bring good luck or fortune upon those living there. 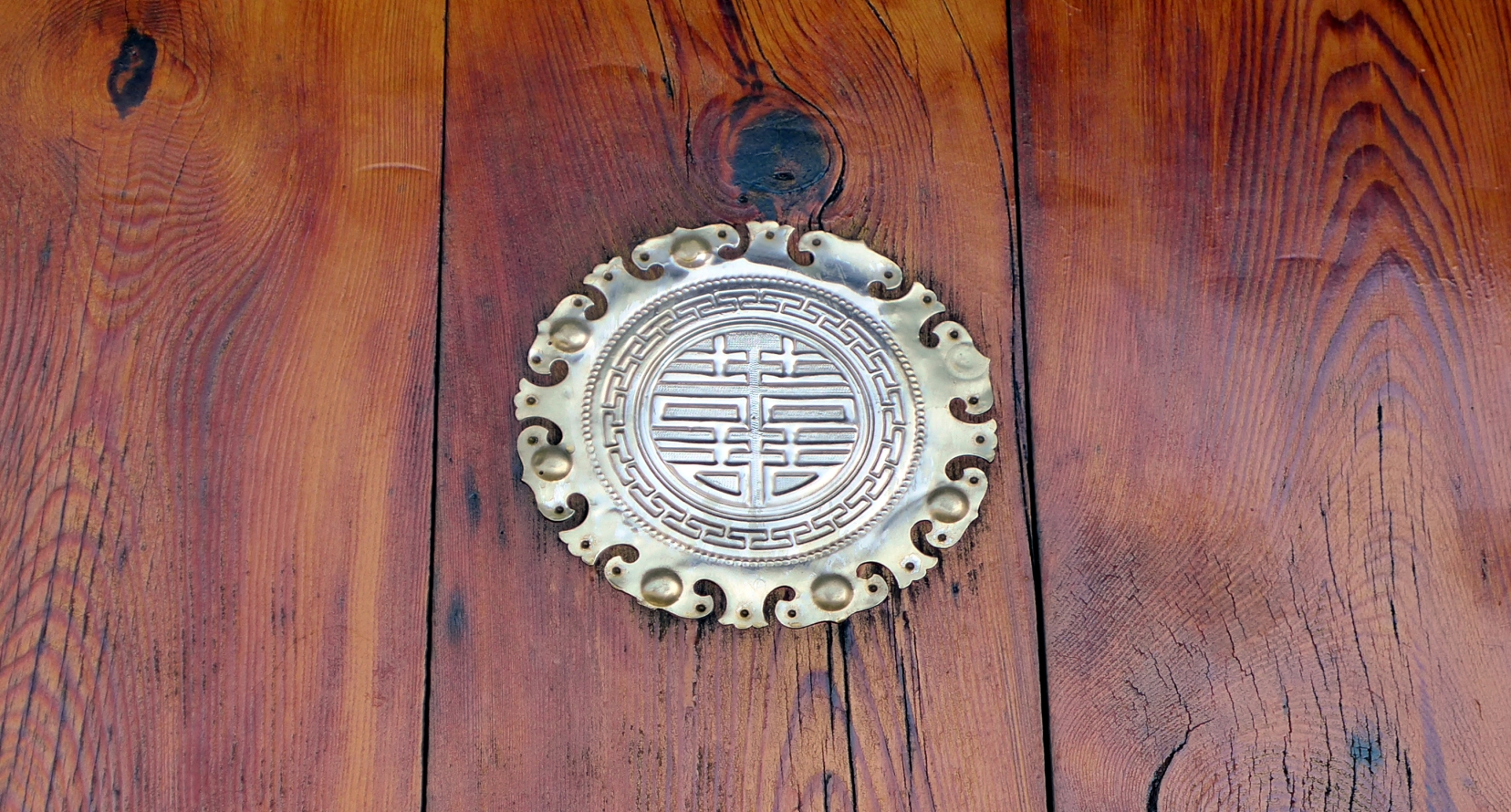 Bukchon is actually a large area and one can walk around for a few hours. As it was approaching frostbite weather we elected to only go to the most famous area with the streets full of hanok. Though there are some very old hanok, the truth is that many were mass produced in the 1930s as urbanisation increased under Japanese colonial rule. The traditional style, regardless of when they were built, is still beautiful and well worth a visit if you want to experience old-style Korea.

One thought on “북촌한옥마을 Family Fortresses”